Based on presentations at the annual meeting of the Medical Group Management Association in October 2010 in New Orleans, LA.
Web Exclusives

The Medical Group Management Association (MGMA) makes a practice of taking the pulse of its members. MGMA’s membership includes 21,500 professional administrators in 13,700 organizations, representing 275,000 physicians, who provide more than 40% of the healthcare services in the United States. The results of several surveys conducted this year reflect providers’ escalating panic over:

Limits on New Medicare Patients
Based on responses from 2860 medical practices representing 63,000 physicians to a survey conducted in August 2010, more than 67% of practices are likely to limit their number of new Medicare patients, and 50% would refuse them altogether unless Congress halts the anticipated Medicare reimbursement cuts. Congress has repeatedly failed to address what MGMA and physicians see as a flawed sustainable growth rate (SGR) formula. The 23.6% cut expected on December 1, 2010, was postponed for just 1 month, and an additional 6.5% reduction to the Medicare Part B conversion factor may occur on January 1, 2011.

“Cuts totaling 30.1% would be very painful for medical practices that are trying to determine their budgets for 2011,” said William F. Jessee, MD, President and CEO of MGMA, who presented the survey results. “Uncertainty about the future is creating an unsustainable environment for many who practice in areas with large Medicare populations,” he said.

Survey respondents indicated that without congressional action to halt the reductions, their practices would alter day-to-day operations in ways that would affect patient access to care. Researchers asked how practices responded to anticipated cuts in June 2010 (which were averted by congressional action), and how they expect to respond to the next threat.

In June, when a payment cut was expected (but then delayed), practices reacted as follows:

Practices are considering these steps if Medicare reimbursement cuts are enacted:

Most practices would also reduce clinical administrative staff, delay increases in physician salaries and/or benefits, and delay purchases of EMR systems and new clinical equipment and/or facilities. “Congress has played kick the can with SGR for quite some time, but the environment is very different this time around,” Dr Jessee noted. “Acting on something that will add $330 billion to the debt is not likely to be popular.” He predicted that it is only a matter of time before private insurers follow Medicare’s lead, saying, “They will probably look for opportunities to make ‘adjustments’ in their reimbursement rates too.”

Dave Gans, FACMPE, MGMA’s Vice President, Practice Management Resources, observed, “Anticipating the possibility of a 30% reduction in payments when practice expenses are going up would be catastrophic to practices.” This scenario is especially alarming in areas where physician shortages exist, Dr Gans added. “In Massachusetts, over half the primary care practices are already closed to all new patients, not just Medicare,” he emphasized.

Satisfaction with Payers Varies Considerably
Practice managers were also surveyed regarding their perceptions of the payer environment in 2010. This was MGMA’s third annual poll to determine attitudes about payer interactions. This year’s questionnaire focused on 7 large companies—Aetna, Anthem, CIGNA, Coventry, Humana, Medicare Part B, and UnitedHealthcare (Blue Cross/Blue Shield was excluded because of state-by-state variability).

Overall, the respondents were satisfied with payers’ fee schedule disclosure, prompt payment of claims, and standardization and transparency of administrative processes. But there was frustration with the claims denial process, contract negotiations, and rating systems’ lack of transparency.

Medicare Part B ranked highest overall, despite respondents’ issues with provider credentialing, for which it ranked last. Part B garnered the highest scores on questions related to responsiveness, transparency, prompt payment, and overall satisfaction with general administrative functions.

“Aside from its problematic credentialing system, our data show that Medicare’s administrative operations are being viewed as transparent and reliable in comparison with the private sector,” said Dr Jessee. “However, this is in stark contrast to Medicare’s payment system, which once again is on the brink of disaster.” 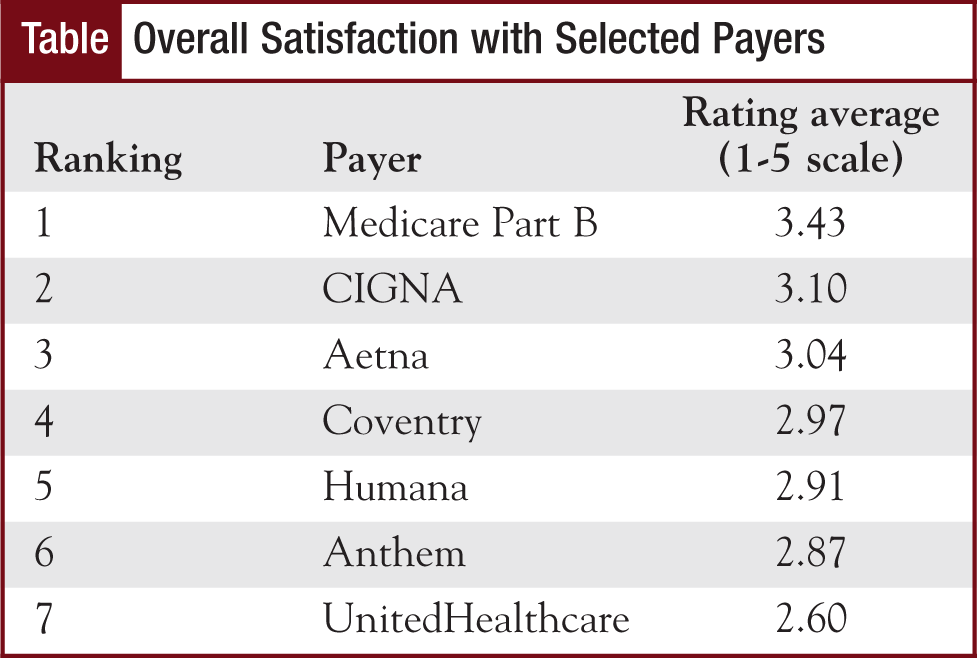 Anders M. Gilberg, MGA, Vice President for Public and Private Economic Affairs for MGMA, said, “MGMA is the representative of group practices that are major suppliers of physician services for those health plans. As such, we look forward to payers reflecting on these results and working with us to create solutions in the areas identified as needing improvement.” Participants ranked the payers’ levels of satisfaction in various categories on a scale of 1 (completely unsatisfied) to 5 (completely satisfied). Overall satisfaction with payers is listed in the Table.

Medicare Part B ranked first (3.45) and United Healthcare ranked last (2.62) in response to the question, “How satisfied are you with the amount of time it takes the payer to respond to your questions?” Rankings were similar for accuracy and consistency of payers’ responses to questions.

For satisfaction with the provider credentialing process, CIGNA ranked first (3.36) whereas Medicare Part B ranked last (2.70). Respondents were dissatisfied with all payers with regard to leverage during contract negotiations. Respondents also said that payers did not conduct “2-way, good-faith negotiations during the contracting process.” In contrast, all the health plans scored high for their disclosure of fee schedules used for reimbursement. Medicare Part B ranked first (4.45), but all others earned high scores as well (3.41-3.57). Scores for rating system transparency were all low, with Medicare Part B ranking first (2.82) and Humana ranking last (1.97). All the payers ranked high in promptness of claims payment.

“Areas with the least satisfaction are the claim appeals process,” Dr Jessee noted. Medicare Part B ranked highest, possibly because “we know what we are getting with them,” he said, whereas UnitedHealthcare ranked last.

Physician Revenue Affected by Type of Ownership
Median total medical revenue was found to be substantially lower for physician practices that are owned by hospitals or integrated delivery systems (IDSs) than for their independently owned counterparts, according to results of another survey.

These findings, however, probably do not indicate that physicians in independent practices are better compensated, the presenters suggested, but rather reflect a “reallocation of income and costs” according to hospitalor IDS-owned accounting systems.

“Everyone talks about how hospitals lose money on their own practices. Yes, they have lower revenue than non–hospital-owned practices, but a lot of this comes from how they account for the revenue,” Dr Jessee explained. “Nonetheless, median total medical revenue is 44% less than for non–hospital-/IDS-owned groups.”

The 2010 cost survey, based on 2009 data from 1003 practices, is considered “the gold standard report of industry benchmarks for cost and revenue,” said Shirley Zwinggi, MBA, Chair of the MGMA Survey Advisory Committee. It spotlights critical staffing, cost, and revenue performance metrics.

According to the survey, the median total medical revenue for a multispecialty hospital-owned practice was $448,597 per full-time-equivalent physician, compared with $798,606 for non–hospital- or IDS-owned practices, a difference of $350,011.

Care Integration Driving the Trend of Mergers and Acquisitions
After a brief period of stagnation, mergers and acquisitions among healthcare systems and physician practices are again on the rise.

Mark Reiboldt, of Coker Capital Advisors, an investment bank in Alpharetta, GA, that focuses on healthcare mergers, acquisitions, and restructuring, said at the meeting that between 2007 and 2009, hospital mergers and acquisitions dropped by 35% and the median transaction value fell by 57%. “As a result, 2009 proved to be one of the lowest years on record [for mergers], but now in 2010, the volume of transactions is up 25% to 30%, and valuations are also going up— not to where they were in the 1990s, but they are getting back up there,” he reported. “Health systems are paying more, since they have some capital to work with. They are buying single practices and multispecialty groups, facilities, and hospitals.”

Care integration has become the predominant strategy driving mergers and acquisitions among hospitals, health systems, and physician-led medical groups. These transactions take many forms, all intended to move provider organizations closer toward the IDS model.

Physicians and hospitals alike are drawn to the new model. “Physicians are willing to go to the hospital that can provide the most security and reduce regulatory burdens,” he observed. “For hospitals it is similar. The days of being a single hospital ‘system’ are about as difficult as being a solo physician practitioner,” he pointed out.