In academic medicine, deans attend many mandatory social functions where they often have to make remarks. Over the past decade, I have been to more than my share of board meetings, mandatory dinners, luncheons, chair investitures, and approximately half a dozen portrait unveilings. Recently, however, I had the great honor of speaking at a portrait unveiling of a colleague (photo), who is very much alive and active. I would like to share my comments at that portrait unveiling for Geno J. Merli, MD, MACP, which occurred this past spring on our campus. 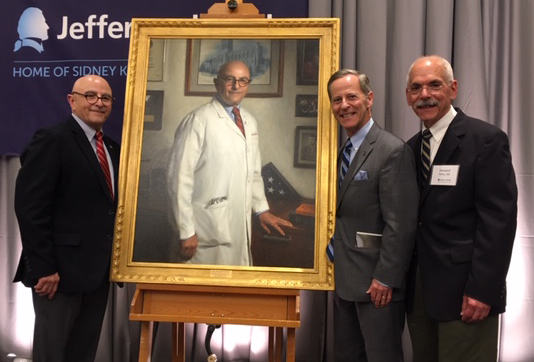 Why Jefferson Health is honoring Dr Merli is easy to understand. Dr Merli is the Associate Chief Medical Officer at Thomas Jefferson University Hospital, and having trained at Jefferson University in internal medicine and rehabilitation medicine, his total tenure on our campus exceeds 45 years. He has evolved into a nationally recognized expert in the areas of prophylaxis for deep-vein thrombosis and pulmonary embolism. Most interesting, however, Dr Merli, along with Howard H. Weitz, MD, MACP, FACC, is the codirector of the American College of Physicians television series that is aptly named Annals Consult Guys. For the past decade, Drs Merli and Weitz have been asked to speak at academic medical centers across the country about their specialty—medical management of the surgical patient. This field was practically invented by Drs Merli and Weitz with the original publication of their widely read textbook, Medical Management of the Surgical Patient.1

The real reason to honor Dr Merli is his amazing singular contribution to a complex organization such as ours. In my view, he is the “doctor’s doctor.” What follows is an edited version of my comments at the ceremony for the unveiling of his portrait.

What a great treat it is for me to be here to honor my longtime colleague and friend Geno J. Merli. Honoring Geno is easy. Putting his life at Jefferson into context and connecting it all here is a much tougher job, but I am your man. I have a special recipe for a tribute to Geno, which Dr William Kissick taught me at the Wharton School nearly 40 years ago. This recipe has 3 ingredients—point with pride, view with alarm, and end with hope. I intend to use this recipe here.

Pointing with pride to Geno’s many accomplishments could take us hours, so let me personalize it. When I came to Jefferson the first week of January 1990, I had already met Dr Merli at the Society of General Internal Medicine and was well aware of his national reputation. Perhaps what most folks don’t know is that Dr Merli truly has inherited a hero’s DNA.

Geno’s father (Gino Merli) received the Medal of Honor for bravery in action in September 1944, just 2 months after D-Day, in Belgium.2 Gino Merli the elder defended a machine gun emplacement, virtually single-handedly, against nearly 3 scores of German attackers. When the dust settled in the morning after the engagement, only Gino Merli remained alive, and his position was surrounded by scores of dead Nazis.

In the history of the Medal of Honor in our country, there have been only 2 father–son recipients.3 Please let me elaborate.

Now, I do not contend that Dr Merli faced the same level of threat as did his dad, but he is truly our very own Jefferson hero, and those genes have been expressed on our campus for decades. There has never been a medical situation that Geno failed to tackle himself, or an emergency that Geno did not fully personally embrace. In my 30 years of primary care practice on this campus, I knew that Geno was always available to me, virtually 24/7. In fact, when I myself was a patient nearly 17 years ago, I chose Geno to be my personal physician (to do the preoperative and postoperative work that bracketed my complex spinal fusion surgery).

With regard to viewing with alarm, my major source of alarm is probably obvious to many of you here today, especially to the most senior colleagues in the audience. That is, where will all the future “Dr Merlis” come from? For example, in a society today that hardly values self-sacrifice and real leadership, where will we find another Dr Merli?

In his recent book, The Road to Character, David Brooks does an outstanding job describing the challenge that we face.4 He states, “The meaning of the word ‘character’ changes. It is used less to describe traits like selflessness, generosity, self-sacrifice, and other qualities that sometimes make worldly success less likely. It is instead used to describe traits like self-control, grit, resilience, and tenacity, qualities that make worldly success more likely. The meritocratic system wants you to be big about yourself—to puff yourself, to be completely sure of yourself, to believe that you deserve a lot and to get what you think you deserve.”4

If David Brooks’ thesis is right, the attributes that define Dr Merli—selflessness, generosity, kindness, and self-sacrifice—are going to be rare qualities indeed. This will be especially true as the generation of millennials, who are just now reaching “attending hood,” have placed grit and tenacity above selflessness and generosity.

I am going to end with a great deal of hope for the future, because I am an eternal optimist. My own 30-year tenure at Jefferson is filled with pride and a great sense of hope and accomplishment.

Medicine, as practiced by Dr Merli, remains in my view our highest calling. Where else in this crazy world could we practice what the ancient Hebrews called tikkun olam, namely, “repair of the world”?

Geno J. Merli, you are a Jefferson hero. You have practiced selflessness and generosity each and every workday. You have participated in repairing the world.

Mazel tov on this special day and on your singular contribution as a true hero to this important organization.

Well, there you have it: a rare opportunity to pay tribute to a colleague and to put a lifetime’s worth of work into context, bending the art of history from the battlefields of Europe during a most trying time in our history to the hallways of our busy academic medical center. This was a true privilege for me.

Do you know a real hero in your own work environment? I would be interested to learn more about such an individual. As always, you can reach me via e-mail at This email address is being protected from spambots. You need JavaScript enabled to view it..