Lipid-Lowering Drug Pipeline: There Is Life After Statins

Value-Based Care in Cardiometabolic Health May 2012, Vol 1, No 1
Wayne Kuznar

Chicago, IL—“There is life beyond statins, and the next 10 years will be as exciting, and hopefully beneficial, to patients as the statin era has been,” said Evan A. Stein, MD, PhD, Director, Metabolic and Atherosclerosis Research Center, Cincinnati, OH, in review of the current landscape for lipid-modifying drugs at the 2012 Annual Meeting of the American College of Cardiology.

The drawback to studying ApoB antisense drugs has been the 6 months it takes to achieve maximum effect on ApoB and LDL cholesterol (LDL-C) levels, “making it difficult to do doseranging studies,” he said.

Although the primary effect of mipomersen is on ApoB production, it has an equal effect on LDL-C reduction, Dr Stein pointed out. It has dosedependent efficacy; at 400 mg weekly, mipomersen monotherapy reduces both ApoB and LDL-C levels by a median of 70%. 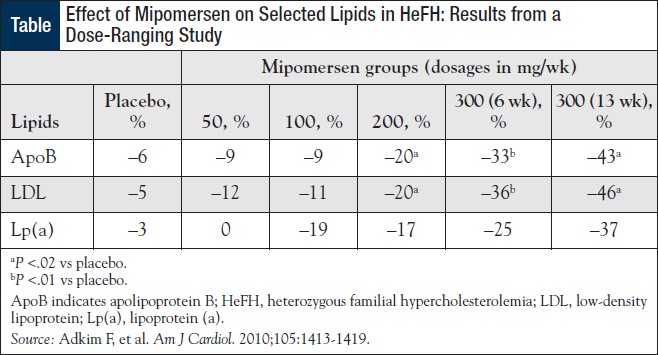 When used in addition to maximally tolerated lipid-lowering therapies, mipomersen reduced levels of LDL-C by 25% to 37% and ApoB by 26% to 38% in the above patient groups (Table). It also had a “fairly robust” effect in reducing levels of Lp(a) by 21% to 34%, Dr Stein stated.

Because mipomersen is not metabolized through the CYP450 enzyme, it has no clinically significant drug–drug interactions with statins or ezetimibe (Zetia), he said.

The other class of agents with impressive potential targets PCSK9, a newly discovered hepatic regulator of the LDL receptor. PCSK9 in the plasma binds to LDL receptors and reduces recycling, effectively downregulating LDL receptor activity and resulting in increased plasma LDL-C.

Injectable human PCSK9 monoclonal antibodies bind to PCSK9 to block its effect and prevent the degradation of LDL receptors.

Dose-dependent reductions in LDLC of 35% to 61% (150 mg twice weekly) from baseline were observed with SAR236553; a reduction in ApoB levels of >40% with the highest dose was also observed. Dose-dependent increases in high-density lipoprotein cholesterol also occurred.

SAR23655. In a larger placebo-controlled multicenter randomized clinical trial in patients with primary hypercholesterolemia, a subcutaneous injection of SAR23655 every 2 weeks at a dose of 150 mg reduced LDL-C by 72% in patients who were already being treated with atorvastatin (Lipitor).

“The effects [of SAR236553] are additive rather than synergistic,” said Dr Stein. The reductions in LDL-C with the PCSK9 monoclonal antibody occur within days, peaking at 2 weeks.

AMG145. Another human monoclonal antibody against PCSK9 is AMG145. Phase 1 data of this agent in 58 patients being treated with rosuvastatin (Crestor), atorvastatin, and simvastatin (Zocor) were reported. In the group receiving low-dose to moderate-dose statins (N = 40), AMG145 given every 2 weeks or every 4 weeks lowered LDL-C by an additional 80%. Further, levels of Lp(a) declined by ≥30% in the patients receiving low-tomoderate doses of statins who were treated with AMG145 every 2 weeks and every 4 weeks; the group receiving high-dose statins (N = 7) had a reduction in Lp(a) that approached 45%.

“It appears as if 2-week, possibly 4[-week], dosing is needed to keep values stable; there may be differences between different monoclonal antibodies,” Dr Stein concluded.