Utilization, Spending, and Price of Opioid Medications in the US Medicaid Programs Between 1991 and 2019

This information was presented as a poster at the 24th International Society of Pharmacoeconomics and Outcomes Research meeting in New Orleans, LA, in May 2019.

BACKGROUND: The opioid epidemic and drug abuse are critical public health challenges in the United States. The number of deaths from exceeding the recommended opioid dose is increasing.

OBJECTIVE: To describe the recent trends in utilization, spending, and cost of opioid medications in the US Medicaid population between 1991 and 2019.

METHODS: This retrospective, descriptive study was designed to evaluate the utilization of, spending on, and cost of opioids from 1991 to 2019 in the Medicaid population. We extracted data from the Centers for Medicare & Medicaid Services national Medicaid pharmacy files. The opioids received included fentanyl, meperidine, morphine, hydromorphone, oxymorphone, hydrocodone, hydrocodone plus acetaminophen, oxycodone, oxycodone plus acetaminophen, tapentadol, and tramadol. The number of prescriptions and reimbursement spending were calculated for each medication per quarter year. The average per-prescription reimbursement as a proxy of drug price was calculated as the reimbursement amount divided by the number of prescriptions per quarter year. The market shares by spending and utilization were also calculated for each opioid medication.

In the US population, the number of deaths that result from exceeding the recommended opioid dose is increasing.1 Death resulting from overdoses of prescribed and nonprescribed opioid medications increased 4-fold from 1999 to 2019, and the overdose of opioid medications led to a daily average of 136 deaths in the US population.2 From 2000 to 2010, opioid prescription utilization rose to almost 90 million.3 In 2013, the combination of opioid overdose and the inappropriate use of opioids cost the United States approximately $78.5 billion.4 Furthermore, medical expenses increased as a result of the inappropriate use of opioids by individuals who had more than 1 disease (ie, multiple comorbidities).5

The number of adults and children receiving opioid therapy has significantly increased in the emergency department setting in the United States.6,7 Patients with conditions that are not related to cancer are more likely to receive a weaker opioid than a potent opioid.8 Opioid therapy has been prescribed in the primary care setting for individuals who have a chronic noncancer illness, especially those with low-back pain.9 Furthermore, opioid medications are prescribed more often to women with endometriosis than to women without endometriosis.10

Opioid medications are not endorsed in the Centers for Disease Control and Prevention guideline as a primary treatment option for chronic pain in individuals without cancer, because of the medications’ harmful effects.11 In clinical practice, however, there is a distinction between various healthcare specialties when prescribing opioids in the United States, and primary care physicians prescribe the largest number of opioid drugs.12

A study by Xie and colleagues has shown that the total healthcare costs were dramatically higher in patients who were consistently receiving opioid medications than in patients who did not receive them, for the 12 months after receiving the first opioid prescription at the emergency department or at hospital admission ($49,766 vs $19,875, respectively; P <.0001).13

Bonakdar and colleagues examined the mean daily use of opioid therapy in the US Medicaid population for 10 years, from 2005 to 2014.14 The researchers found that hydrocodone was the most frequently prescribed, and oxycodone had the largest percentage increase of days supplied.14 Jiang and colleagues reviewed the prevalence of opioid medication use from 2010 to 2011 among patients who were going to have surgery in a large academic center.15 The results showed that the rates of opioid use in orthopedics, neurosurgery, and gastrointestinal surgeries were 23.8%, 18.7%, and 14.4%, respectively.15

This retrospective study was designed to estimate the utilization of and spending on opioid medications for Medicaid patients from the first quarter of 1991 to the fourth quarter of 2019. We extracted data from the national Medicaid pharmacy claims drug data that are collected by the Centers for Medicare & Medicaid Services.16 These data are available publicly, and drug claims from all states within the United States, as well as the District of Columbia, were included in our analysis. These data include the National Drug Code (NDC) of opioid medications, drug names, years, and quarters, as well as total pharmacy reimbursement amount, including the drug costs and administrative charges. Drug prescriptions were limited in this analysis to the outpatient setting.

In the 4 quarters of 2006 and in quarter 3 of 2007, the data included documentation errors (eg, extra zero in reimbursement amounts or in the number of prescription for many NDC-specific drugs).17,18 Thus, to provide a valuable estimation for this data set, we calculated the average for medication utilization and spending of the quarters before and after the quarters with errors. The database includes generic and brand names of the opioid medications. 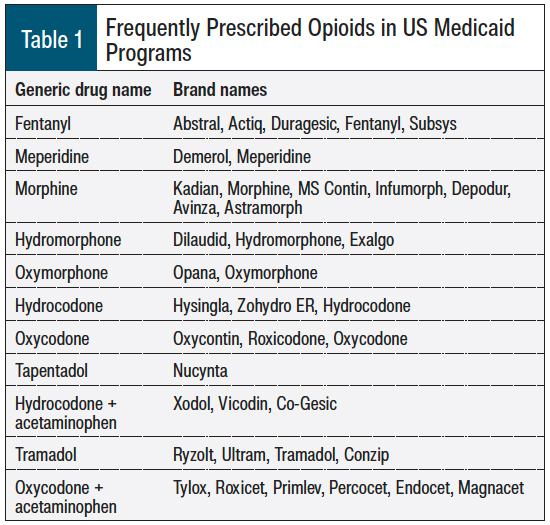 We calculated the number of prescriptions and amount of spending (ie, the reimbursement amount) separately, by summing every quarter for each opioid medication across the individual NDCs. The data for each category of all drugs were aggregated, and the average cost (ie, the price) per paid claim was calculated as the spending amount, divided by the number of prescriptions.

The cost of opioid drugs is estimated in our study, because the data do not provide the cost. The cost could be less than what we present, because any rebates from the drug companies were not available in the database. We calculated the market shares for opioid medications using the percentage of the number of prescriptions and the percentage of spending. Several previously published studies used the same procedure and method as used in our study.19-22 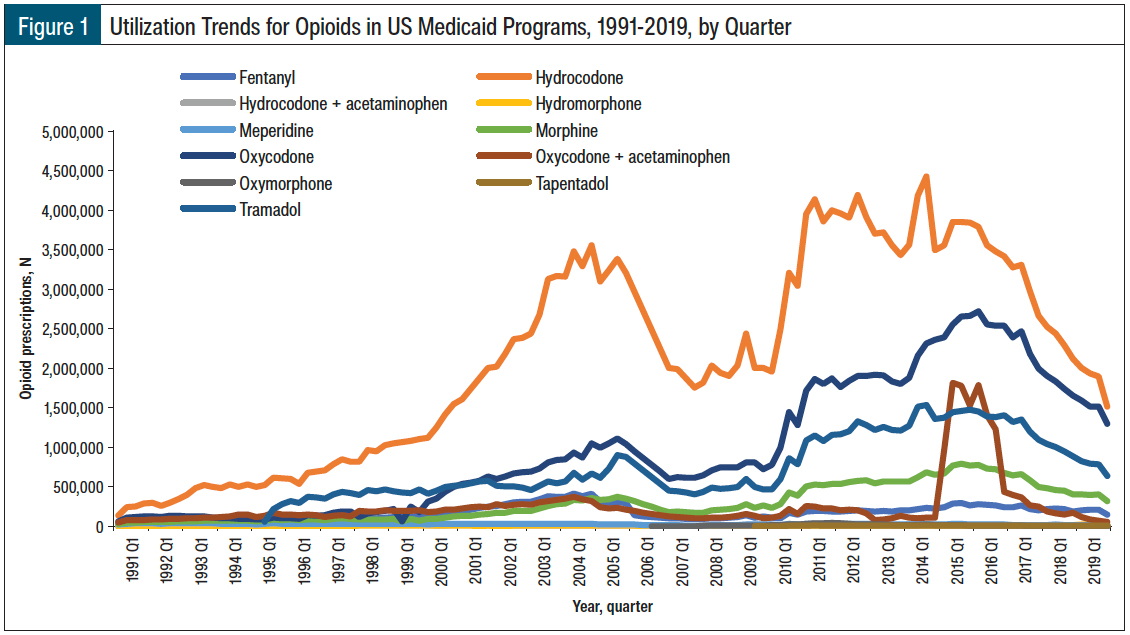 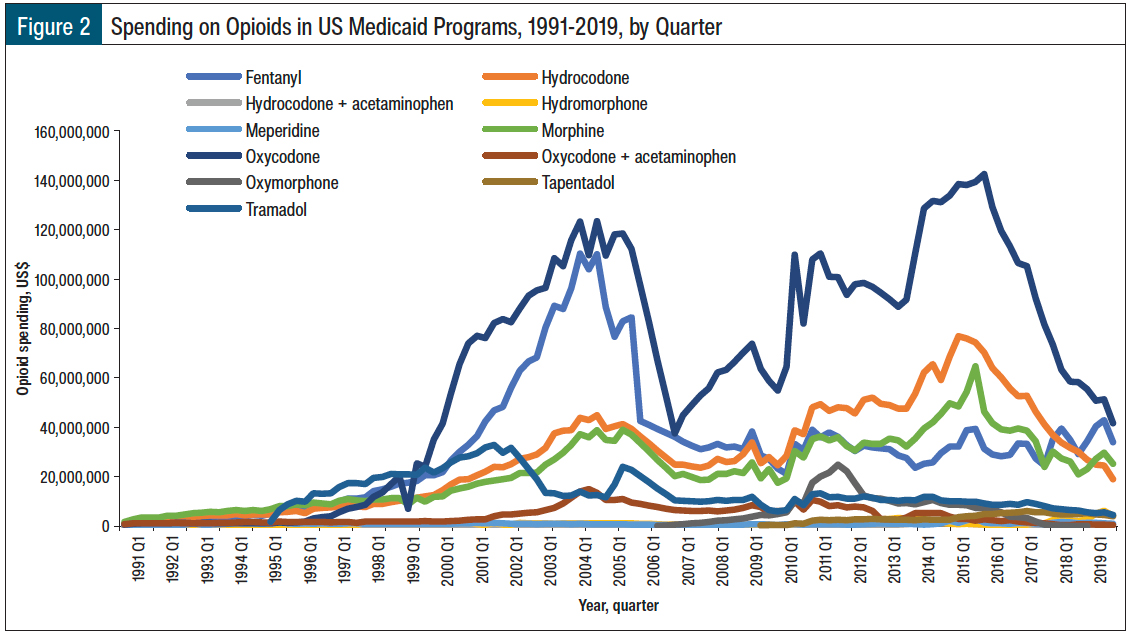 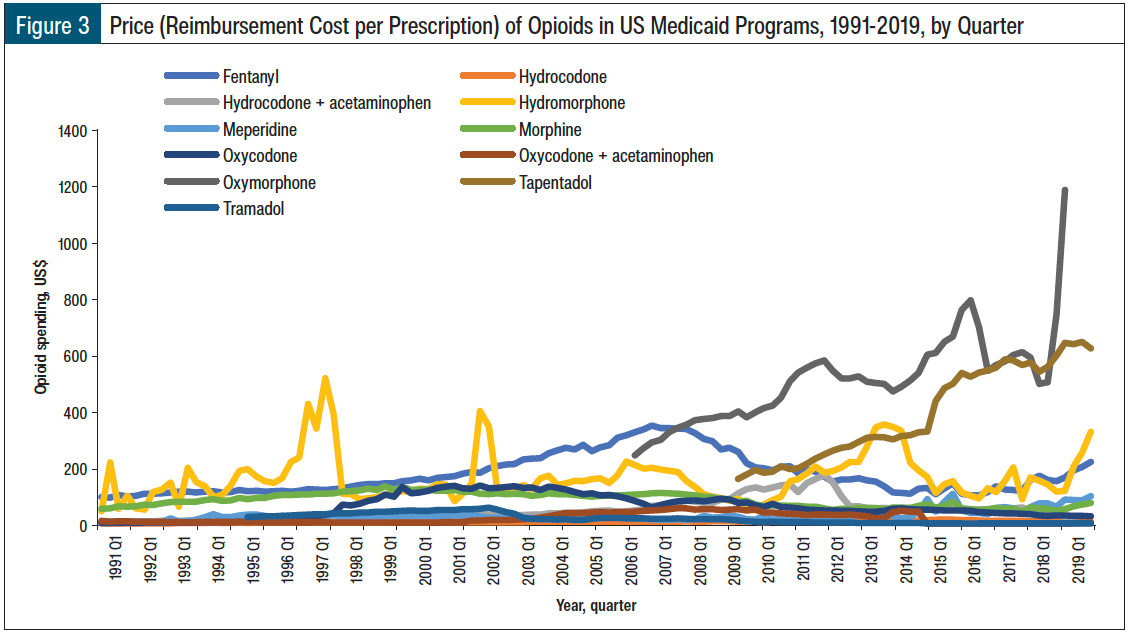 The lowest price per prescription of oxymorphone was approximately $247.79 in 2006, but its price increased gradually to $796.94 in 2016. Overall, the prices of hydrocodone, oxycodone plus acetaminophen, and tramadol were less than $100 per prescription between 1991 and 2019. The majority of opioid prices increased over time, and the highest average costs per opioid prescription in 2019 were $1188 for oxymorphone, $641 for tapentadol, and $198 for fentanyl.

Our study demonstrates a wide view of the most frequently used opioid medications in the US Medicaid population that were reimbursed by the nationwide state Medicaid programs. The total number of all opioid prescriptions for Medicaid beneficiaries increased from approximately 2 million in 1991 to a peak of approximately 41.6 million in 2015, and then decreased to approximately 19.1 million in 2019.

Opioid medications are prescribed for the treatment of various conditions, such as cancer-related and noncancer pain23; therefore, this trend of high utilization of opioids within the US Medicaid population is not surprising, considering the drugs’ benefits for many chronic conditions. A study by Joranson and colleagues on the use of opioids for the treatment of severe pain showed an increase in oxycodone use from 1.6 million grams to 2 million grams between 1991 and 1996, which is similar to the utilization trend of oxycodone according to our findings.24

The high utilization of opioid prescriptions seen in our study before 2010 could be a result of the prescribers’ unfamiliarity with the health consequences of using opioid medications. In their 2010 study of physicians in Wisconsin, Wolfert and colleagues found that the physicians had insufficient awareness about opioid prescribing.25 Studies have shown that if opioid therapy is not monitored and controlled, high utilization could lead to the inappropriate use of these medications and could increase the number of days that patients spend in the hospital.26-29

Our findings show that the utilization of opioid drugs declined after 2006, which can be explained by the pooling of elderly patients to Medicare Part D.17 This pooling means that the older patients were included in the Medicaid program before 2006, but they were removed after the launch of Medicare Part D.

Our study is comprehensive and distinct, because it examines a long period of 29 years. Our findings show that the most prescribed drug for Medicaid recipients during this study period was hydrocodone, because of its low price, which is less than $20 per prescription. Individuals could become addicted to hydrocodone when it is used unnecessarily, and the overuse of hydrocodone may lead to health problems.

Conversely, the medical uses of oxymorphone were low, because of its high price. Also, as a result of its limited benefits, in 2017 the FDA proposed to withdraw oxymorphone hydrochloride from the market32; therefore, the use of oxymorphone has declined. In 12 US states, 45% of Medicaid patients were prescribed an opioid therapy in 2009, which is a high rate, but it was limited to only 12 states.33

Despite disparate results in various states, a similarity exists in the high utilization rate of opioid medications. It is unclear why the sharp increases in the use of oxycodone plus acetaminophen between 2015 and 2016 (Figure 1). We have found that the annual spending on oxycodone was the highest among all opioid medications for Medicaid patients (Figures 2 and 3), which increased over the period of our study. Even with the high utilization of hydrocodone over the 29 years of our study, we found that the greatest spending was for oxycodone.

Our study has several limitations. First, as in all studies based on claims data, we were not able to evaluate accurately the use of opioid medications, because of the unknown patient-specific information, patient demographics, and patient comorbidities. In addition, opioid medications have a broad array of indications for many diseases, and we could not determine from the data collected the reasons that these medications were prescribed.

Second, these data include a known error in the 4 quarters of 2006 and in quarter 3 of 2007; however, we adjusted for these errors by calculating the previous and following quarters, to make the data more meaningful.

Third, the prices of opioids in our study are representative of all the Medicaid programs combined throughout the nation; thus, our study is a good baseline for each state to match its opioid prices to our findings.

Fourth, in June 2017, the FDA demanded that oxymorphone hydrochloride be removed from the market; this could explain the negligible use of this medication in the third quarter of our study.

Our results present data for healthcare providers to consider the appropriate use of opioids in the Medicaid population. A considerable use of opioid medications may lead to high healthcare costs and drug abuse, resulting in patient safety problems. Effective cost-containment programs and combating drug abuse strategies regarding opioid medications are warranted in the US Medicaid programs.

Author Disclosure Statement
Dr Alsultan and Dr Guo have no conflicts of interest to report.