The 5-year relative survival rate for patients with metastatic NSCLC is only 7%, based on data from 2010-2016.3 Common symptoms observed in patients with NSCLC include dyspnea, cough, fatigue, distress, and pain—symptoms that can have a significant impact on the patient’s daily function and quality of life.4

The treatment of metastatic NSCLC can include chemotherapy, radiation therapy, chemoradiation, immunotherapy, targeted therapy, or a combination of these therapies.5 NSCLC is associated with a wide range of genomic mutations. Approximately 3% to 4% of NSCLC tumors harbor a mutation that leads to mesenchymal-epithelial transition (MET) exon 14 skipping.6-8 Patients with NSCLC and the MET exon 14 skipping mutation are likely to have aggressive forms of NSCLC with a poor prognosis and limited treatment options.6,9 The first treatment for this patient population was approved by the US Food and Drug Administration (FDA) in 2020.10

On May 6, 2020, the FDA approved capmatinib (Tabrecta; Novartis), an oral kinase inhibitor, for the treatment of adults with metastatic NSCLC associated with the MET exon 14 skipping mutation, as detected by an FDA-approved test.10 Capmatinib was the first agent to be approved by the FDA for the treatment of any tumor with MET exon 14 mutation. Capmatinib was granted an accelerated approval and received breakthrough therapy and orphan drug designations by the FDA for this indication.10

“Lung cancer is increasingly being divided into multiple subsets of molecularly defined populations with drugs being developed to target these specific groups,” said Richard Pazdur, MD, Director of the FDA’s Oncology Center of Excellence. “Tabrecta is the first approval specifically for the treatment of patients with non–small-cell lung cancer whose tumors have mutations that lead to MET exon 14 skipping. This patient population now has an option for a targeted therapy, which they didn’t have prior to today,” Dr Pazdur noted.10

Capmatinib is an oral kinase inhibitor that targets and blocks the activity of MET, including the variant mutation produced by exon 14 skipping. In preclinical studies, capmatinib inhibited cancer-cell growth driven by the mutated MET variant lacking exon 14. The drug showed antitumor activity in tumors with the MET exon 14 skipping mutation or MET amplification.11

Capmatinib is available in 2 doses, 150-mg and 200-mg tablets. The recommended dose of capmatinib for this indication is 400 mg, taken orally twice daily with or without food.11 Patients should be selected for capmatinib therapy based on results of an FDA-approved test showing the presence of the MET exon 14 skipping mutation.

The GEOMETRY Mono-1 study, a nonrandomized, open-label, multicenter, phase 2 clinical trial included 364 patients with NSCLC, of whom 97 patients (median age, 71 years; range, 49-90 years) had NSCLC and MET exon 14 skipping, as detected by local tests and confirmed by an FDA-approved test.6 Of these 97 patients, the majority were female (60%), white (75%), and had an Eastern Cooperative Oncology Group performance status of 0 (24%) or 1 (75%).6 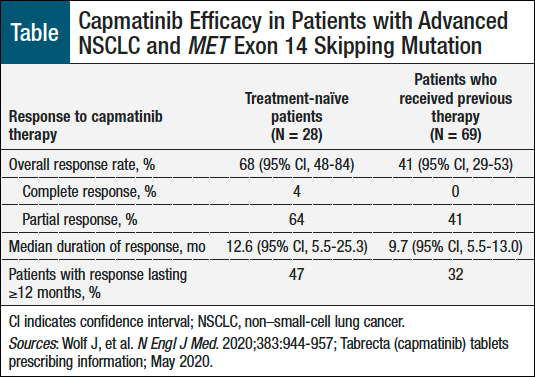 Capmatinib has no contraindications.11

Capmatinib was not associated with differences in safety or effectiveness between patients aged 65 years or older and patients younger than 65 years.11

Hepatotoxicity has occurred in patients receiving capmatinib. Liver function tests should be done before initiating capmatinib therapy, then every 2 weeks during the first 3 months of treatment, and then once a month or as clinically appropriate, with more frequent testing in patients who have increased levels of transaminases or bilirubin. Capmatinib may require a dose reduction, or temporary or permanent discontinuation, depending on the severity of the adverse reaction.11

Patients with metastatic NSCLC whose tumors harbor a MET exon 14 skipping mutation have limited treatment options. Capmatinib, a kinase inhibitor, is the first therapy to receive FDA approval for the treatment of this patient population. In the GEOMETRY Mono-1 study, treatment with capmatinib showed an overall response rate of 68% in treatment-naïve patients and 41% in previously treated patients; 47% and 32% of patients in these 2 groups, respectively, sustained their response for ≥12 months.11 The approval of capmatinib provides the first targeted therapy designed specifically for patients with metastatic NSCLC and the MET exon 14 skipping mutation.