Competition Heats Up in Rheumatoid Arthritis and Other Autoimmune Conditions

Rheumatoid arthritis (RA) is a systemic, inflammatory form of arthritis that results in joint inflammation, pain, swelling, and stiffness.1 Although new treatment strategies that focus on early diagnosis, aggressive treatment, and consistent monitoring have helped many patients achieve their goals, RA continues to present clinical and economic challenges to patients, physicians, and payers. Clinically favorable and cost-effective treatments must focus on the prevention of disease progression and on improving patients' quality of life and productivity. With the wide variety of treatment options currently available and more in the pipeline, payers are faced with the challenge of identifying the most clinically and economically effective allocation of treatments for RA.

The rapid accrual of evidence, the introduction of new therapies, and the advancement of guideline development methodologies led the American College of Rheumatology (ACR) to broaden the scope of its 2012 recommendations for the treatment of RA in 2015.1 The updated recommendations provide a treat-to-target guidance strategy for clinicians and patients in an era of rapid advances in the treatment of RA.1

DMARDs. Most patients with RA begin therapy with methotrexate to treat joint inflammation, because it is a relatively safe and effective medication that can be taken orally or by self-injection. Some patients need more than 1 DMARD to control inflammation and prevent joint damage.

Biologics. If patients do not achieve remission with a DMARD or with a combination of DMARDs, a biologic is often the next treatment choice. Biologic drugs stop joint inflammation, slow the patient's immune system, and prevent joint and organ damage.2 Biologics are available in oral, subcutaneous, and infusion formulations. These medications, however, are often more expensive than DMARDs and may cause serious side effects in some patients.2

Anti-TNF agents. Adalimumab, etanercept, infliximab, golimumab, and certolizumab pegol target the inflammation-causing TNF. Anti-TNF agents can alter the effect of RA on the patient's body by controlling joint inflammation; these agents are used worldwide for the treatment of patients with RA or other autoimmune diseases, such as ankylosing spondylitis, juvenile arthritis, inflammatory bowel disease, psoriatic arthritis, psoriasis, and ulcerative colitis.3

JAK inhibitors. Tofacitinib moderates immune response and is approved by the US Food and Drug Administration (FDA) for the treament of patients with moderate-to-severe RA whose disease had an inadequate response to or who cannot tolerate methotrexate.4

IL-6 inhibitors. Tocilizumab reduces disease activity in patients with RA by inhibiting IL-6 binding to its receptor (IL-6R). Tocilizumab may be used in combination with methotrexate or as monotherapy.5

The Drug Pipeline for RA and Other Immunologic Conditions

In addition to the wide variety of treatment options currently available for RA, several drugs, including baracitinib, sarilumab, secukinumab, and sirukumab, are expected to be approved by the FDA for the treatment of RA and other autoimmune conditions such as psoriasis and psoriatic arthritis in the second half of 2016 (Table 1). In addition, tofacitinib, which is already available on the market, was approved in an extended-release formulation in February 2016 as the first and only once-daily oral therapy for moderate-to-severe RA, and secukinumab, which was approved in 2015 for plaque psoriasis, has received 2 new FDA indications in early 2016 for psoriatic arthritis and for ankylosing spondylitis (Table 1). 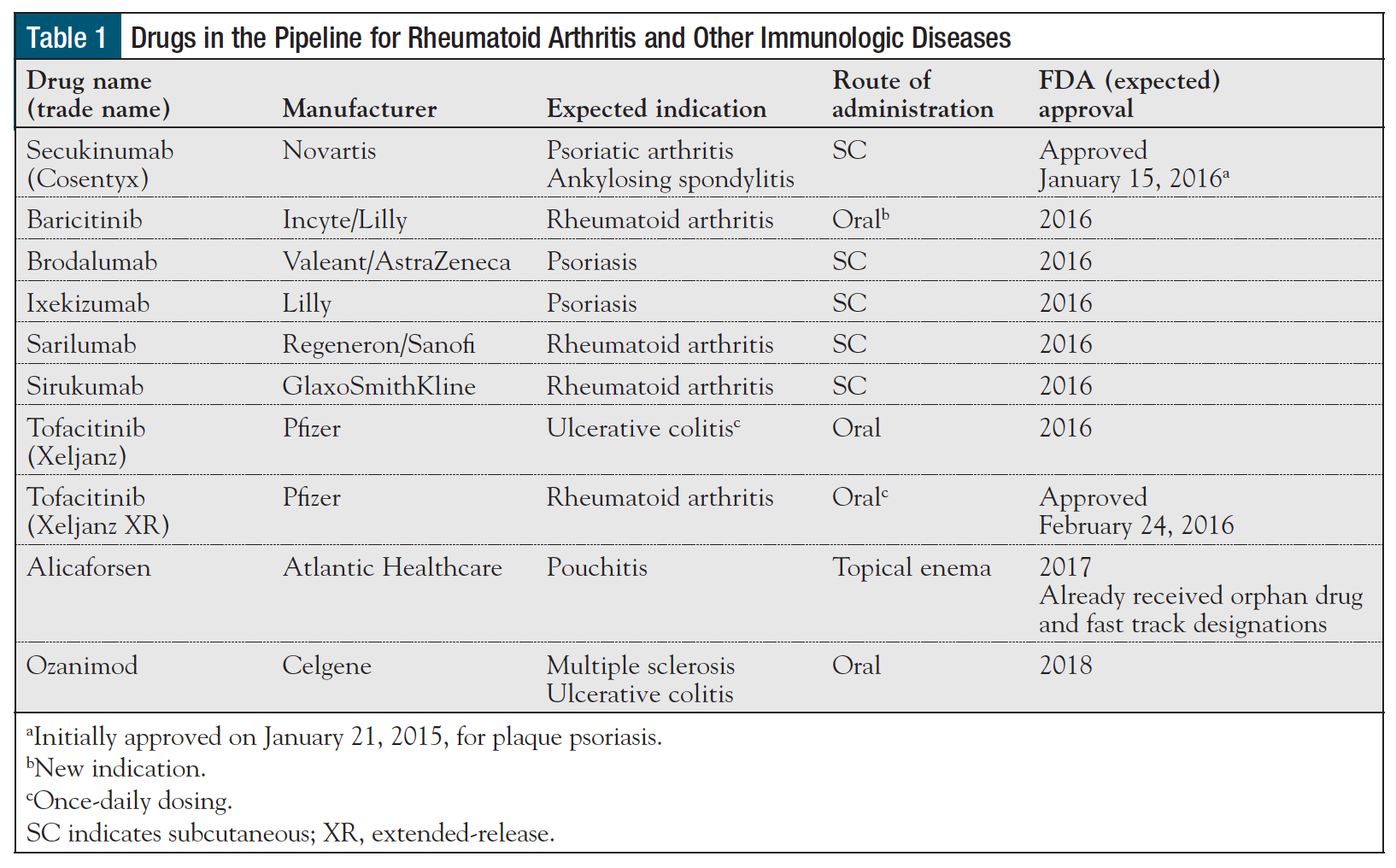 Baracitinib. Baracitinib is an oral JAK1 and JAK2 inhibitor that, if approved, will be the second JAK inhibitor to come to market. Like its predecessor, tofacitinib, baracitinib will likely be indicated for the treatment of adults with moderate-to-severe active RA who have had an inadequate response to methotrexate or cannot tolerate it. Baracitinib blocks JAK1 and JAK2, and is anticipated to compete with tofacitinib, assuming that its pricing is comparable.6

Sarilumab. Sarilumab is an IL-6 inhibitor that, when used in combination with methotrexate, has demonstrated superiority to methotrexate monotherapy in patients with moderate-to-severe RA and has shown no apparent safety concerns. If approved, sarilumab will be the second IL-6 inhibitor on the market,6 after tocilizumab, which was approved by the FDA in 2010.7

Secukinumab. Another drug in the pipeline, secukinumab, is a human monoclonal antibody that selectively neutralizes IL-17A.8 The drug, which was approved by the FDA for the treatment of psoriasis, received expanded indications for ankylosing spondylitis and psoriatic arthritis in adults on January 15, 2016,9 but will also be studied for the treatment of RA and uveitis.

Sirukumab. In partnership with Johnson & Johnson, GlaxoSmithKline is studying sirukumab for the treatment of RA; GlaxoSmithKline is expected to file for approval of the drug in 2016. Like tocilizumab and sarilumab, sirukumab is an IL-6 inhibitor, which is the fastest growing biologic class in RA.10

The IL-6 inhibitors will face competition from biosimilars in the not-too-distant future (Table 2). Several blockbuster drugs for the treatment of patients with RA, including Rituxan, Humira, and Remicade, have either lost or will lose their patent protection within the next 3 years.11

Amgen filed its application for ABP 501, a biosimilar to Humira, in November 2015, based on clinical data that support ABP 501's equivalence to the reference drug in patients with moderate-to-severe plaque psoriasis and in patients with RA. The FDA has begun its review of this biosimilar and is expected to make its regulatory decision in September 2016.12

In addition, Novartis announced that the FDA accepted its application for a biosimilar to Enbrel in October 2015.13 Other companies, including Amgen and Sandoz, are involved in clinical trials for biosimilars to RA therapies and other immunologic conditions (Table 2).

Despite the looming launch of biosimilars in the RA space, however, the ACR decided not to address biosimilars in its 2015 guidelines, which were published online to coincide with the ACR's 2015 annual meeting.2,14 The committee considered wading into the controversial topic, but when the literature review was conducted in September 2014, no biosimilar drugs had yet been approved in the United States. The ACR does not offer guidance regarding treatments that have yet to be approved.14

The management of patients with RA can be challenging, because the treat-to-target approach varies depending on physician preferences and the individual patient's response to therapy. In addition, the treatment of RA has grown more aggressive as physicians implement the use of expensive biologics earlier in the disease progression.15

Many patients switch between multiple therapies as a result of intolerance of or nonresponse to therapy, adding complexity to the treatment protocol and to formulary design. In addition, as rheumatologists continue to embrace more aggressive therapeutic options, payers must be diligent in their review of the new treatment options. Understanding the use of biologics across the medical and pharmacy benefits may help payers keep up with changes in treatment, particularly with respect to 2-drug and 3-drug combination therapies.15

In the past, payers might have expected physicians to treat patients with newly diagnosed RA with oral DMARDs first, self-injectable biologics second, and with infused agents as the last alternative for more advanced stages of the disease. More recently, however, rheumatologists have often chosen to begin treatment with multiple pharmaceutical options at once, phasing drugs out as the disease begins to improve. This combination therapy approach is consistent with the ACR's treatment recommendations for patients with high disease activity and poor prognosis.2,15

One reason for this aggressive treatment approach is that remission is difficult to achieve in patients with established RA. Therefore, physicians focus heavily on their patients achieving remission as early as possible. Although only 10% to 20% of patients with established RA will achieve remission, for patients with early RA (6 months-1 year), remission rates range from 30% to 40%.15 Approximately 1.3 million people in the United States currently have RA. Within 2 years of diagnosis, patients may experience moderate disability; after 10 years, 30% are severely disabled. Approximately 33% of patients diagnosed with RA stop working as a result of their disability, making this disease a valid concern for employers.15

Value-based reimbursement and contracting are gradually becoming recognized options as payers shift their focus from cost to value; however, they have not yet broadly impacted RA and the other inflammatory conditions.

In 2015, Express Scripts introduced a new value-based reimbursement model that will be implemented in 2016. Using comparative data and indication-specific pricing, Express Scripts indicated it plans to favor "clinically superior" oncology medications first and anti-inflammatory medications shortly thereafter.16 Drug manufacturers will have an opportunity to "opt in" to the program and ensure that their treatments will be covered. Therapies that are superior in the treatment of a particular cancer will be covered regardless of the manufacturer's participation in the program. Alternatively, drugs that produce outcomes only in patients with certain cancers may be covered solely for the indications for which they work best if their manufacturers do not participate in the Express Scripts program.16

Agreeing on the terms of an alternative payment deal may be challenging. Pay-for-performance contracts often require tracking certain health outcomes measures in specific patients, but the cost and complexity of doing so often outweigh any financial benefits; therefore, payment deals, such as the Express Scripts reimbursement model, are currently relatively few in the United States.17

Pharmaceutical companies are expected to move toward advanced analytics and real-world data as the basis for contracting with payers to increase the likelihood of receiving fair reimbursement for novel therapies when they demonstrate value. Without this value-based approach, experts fear that the return on investment for novel therapeutics will decline, causing delays in the development of new, and much-needed, therapies for devastating diseases.18

With a rich pipeline that includes biosimilars and new originator drugs with unique mechanisms of action, competition is heating up in RA. Despite the availability of many drugs for the treatment of RA, there is opportunity for new therapies that address an unmet need. Payers and drug manufacturers are also beginning to explore various contracting methodologies that enable access to drugs that demonstrate value.

Most therapeutic classes, as defined by the US Pharmacopeia, have a unique mechanism of action in treating a specific disease, such as diabetes or RA. This, however, is not the case with immunosuppressant drugs, which involves a large therapeutic class with multiple mechanisms of action and disease indications. This reality provides a challenge in developing benefit designs that ensure that innovative therapies are available to patients.

Mr Branning is President of Managed Market Resources, which provides consulting services to many pharmaceutical companies in the United States.