For patients, newly approved drugs represent exciting opportunities to treat serious disease states, many of which have had few treatment options available. New therapies have enabled physicians to initiate treatment earlier and to continue treatment throughout the disease progression. The goal of early therapy is to alleviate the long-term effects of chronic or life-threatening conditions, but when treatment occurs earlier and lasts longer, the cost of therapy also increases.1

In early 2015, new vaccines, treatments for HIV/AIDS, and oncology medications have been prominent among new approvals by the US Food and Drug Administration (FDA). Thanks to advances in treatment, all 3 of these therapeutic categories have either prevented once-fatal diseases or have begun to transform them into sustainable, chronic conditions.

The Table lists the new drugs in all clinical categories approved by the FDA by March 10, 2015. 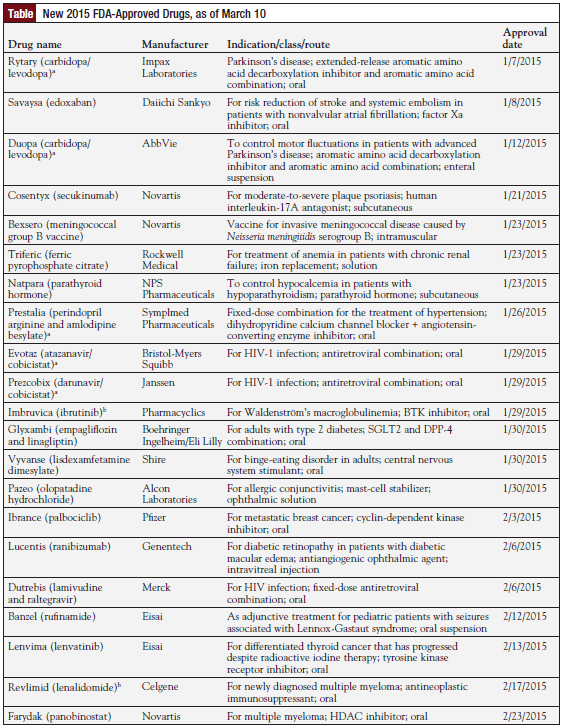 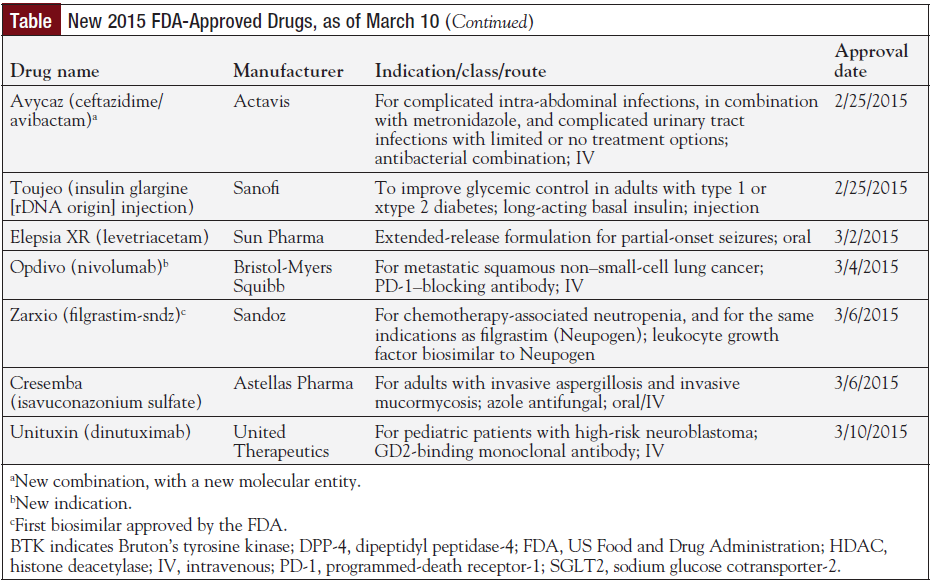 Despite a recent heated public debate sparked by an outbreak of measles, vaccines are widely regarded as one of the greatest public health advances in the United States. Through the use of vaccines, we have eradicated, or nearly eliminated, previously devastating conditions, such as smallpox, and have dramatically reduced the number of patients suffering from preventable conditions, such as measles, diphtheria, and whooping cough.2

As the importance of vaccine safety continues to grow, the development and licensure of new vaccines will add to the already robust list of currently available vaccines. One of those new vaccines, Bexsero (meningococcal group B vaccine), was approved in January 2015, and was the second to receive FDA approval for the prevention of invasive meningococcal disease caused by Neisseria meningitidis serogroup B in individuals aged 10 to 25 years. The first vaccine for the prevention of serogroup B meningococcal disease was Trumenba, which was approved 3 months earlier.

Before these 2 approvals, the existing FDA-approved vaccines only covered 4 of the 5 main serogroups of N meningitidis bacteria that cause meningococcal disease A, C, Y, and W. The FDA used the accelerated approval regulatory pathway to approve Bexsero as well as Trumenba.3

An estimated 1.1 million people are living with HIV in the United States, and approximately 50,000 new cases are diagnosed annually.4 Although many patients have been diagnosed with HIV and are undergoing treatment, only 25% are virally suppressed, reflecting the continued need for new and innovative treatments to help patients achieve viral suppression.4

In January 2015, the FDA approved the combination of atazanavir and cobicistat (Evotaz) for the treatment of adults with HIV-1 infection. This drug is indicated for use in combination with other antiretroviral drugs,5 and is the first and only protease inhibitor that is pharmacoenhanced by cobicistat (Tybost) and is supported by comparative phase 3 trial data.4

Also in January, the FDA approved the combination of darunavir and cobicistat (Prezcobix) for the treatment of patients with HIV. This combination is indicated for use with other antiretroviral agents for treatment-naïve and treatment-experienced adults with HIV-1 infection who have no darunavir resistance–associated mutations.6

According to an article by de Moor and colleagues, within the next decade, the number of Americans who live at least 5 years with cancer is projected to grow by 37% to 11.9 million.7 This growing population of cancer survivors has brought about an interesting dilemma: although treatments for cancer have saved their lives, the therapies often result in severe side effects that may linger for years, including heart damage and radiation syndrome. The emotional effects are also serious, including depression, anxiety, and body image disorders.

A consistent, medical response strategy to these long-term side effects has yet to be determined, but survivorship will become increasingly important as the generation of baby boomers (born between 1946 and 1964) reach an age when some of them are likely to have cancer and other chronic conditions.8

A new drug for the treatment of patients with breast cancer, palbociclib (Ibrance), was granted accelerated approval by the FDA in February 2015, 2 months ahead of schedule.9 Palbociclib is indicated for use with letrozole, an aromatase inhibitor, as first-line treatment in postmenopausal women with metastatic breast cancer that is estrogen receptor–positive and human epidermal growth factor receptor 2–negative. Its unique mechanism of action allows palbociclib to serve as an inhibitor of cyclin-dependent kinases 4 and 6, which promote the growth of cancer cells. The FDA granted this cancer drug a breakthrough therapy designation and a priority review.9

Another cancer medication, panobinostat (Farydak), was approved under the FDA’s accelerated approval program for drugs that show promise in treating a serious disease in February 2015, despite a setback in November 2014, when an FDA advisory committee voted against approving panobinostat for patients with multiple myeloma, because of concerns that the benefits of the drug did not outweigh its risks. Since then, the manufacturer submitted additional information to support the use of panobinostat in patients who have already tried at least 2 other therapies, including the chemotherapy drug bortezomib (Velcade) and the immunotherapy drug dexamethasone.10

Also in February 2015, the FDA approved an expanded indication for lenalidomide (Revlimid), in combination with dexamethasone, for the treatment of newly diagnosed patients with multiple myeloma.11 This combination was approved in 2006 for patients with myeloma who had previously tried at least 1 other therapy.11

The FDA also granted accelerated approval in February 2015 to lenvatinib (Lenvima) for the treatment of the most common strain of thyroid cancer.12 Lenvatinib is a tyrosine kinase receptor inhibitor that blocks the growth agents that tumors need to proliferate. It is currently being studied for liver, kidney, lung, and endometrial cancers as well. The manufacturer anticipates that lenvatinib could become a blockbuster drug by 2020.12

As patients live longer and manage their potentially life-threatening diseases, healthcare costs are likely to continue to rise. Among other influential drugs, the medications approved by the FDA for vaccination against meningococcal disease, for cancer treatment, and for the management of the symptoms of HIV/AIDS will offer patients alternative therapies that have the potential to improve their quality of life and/or extend their lives. Although 2015 has just begun, it is already a momentous year for new pharmaceuticals coming to market.