Gastric cancer and lung cancer impose a substantial burden on patients. In light of the high mortality rate and quality-of-life issues associated with these 2 types of cancer, there is a marked need for additional therapeutic options to improve outcomes for patients with gastric or lung cancer.

The gastroesophageal junction (GEJ) is the area just beneath the diaphragm, where the esophagus joins the stomach. GEJ adenocarcinoma (or stomach cancer) is a cancer that affects this region of the gastric tract.2

The total US expenditures for stomach cancer were estimated to be $1.8 billion in 2010.4

Angiogenesis, the formation of new capillaries and blood vessels, is a process involved in tumor growth.9 Vascular endothelial growth factor (VEGF) is a primary mediator of angiogenesis in normal physiology and in certain diseases.9 VEGF and VEGF receptor-2–­mediated signaling and angiogenesis may play a key role in the pathogenesis of gastric cancer and lung cancer.10-12 The blockade of VEGF receptor-2 signaling inhibits angiogenesis (ie, blood supply) to tumors.12 A number of small molecule inhibitors and antibody-­based agents that target the VEGF pathway have been studied across various cancer types.9 In clinical studies, targeting the VEGF receptor-2 pathway has shown promise as a second-line treatment for patients with gastric or lung cancer.10-12

On April 21, 2014, ramucirumab (Cyramza; Eli Lilly), a human VEGF receptor-2 antagonist, was approved by the US Food and Drug Administration (FDA) as a single agent for the treatment of patients with advanced stomach cancer or GEJ adenocarcinoma that has progressed with or after fluoropyrimidine- or platinum-containing chemotherapy.13 Ramucirumab is a recombinant human immunoglobulin G1 monoclonal antibody, also referred to as an angiogenesis inhibitor (ie, blocking the blood supply to tumors).13

The FDA granted ramucirumab a priority review based on its potential to provide a significant improvement in safety or effectiveness in the treatment of advanced gastric cancer or GEJ adenocarcinoma. The FDA also designated ramucirumab as an orphan drug because it is approved for a rare disease.13

According to Richard Pazdur, MD, Director of the Office of Hematology and Oncology Products in the FDA’s Center for Drug Evaluation and Research, “Although the rates of stomach cancer in the United States have decreased over the past 40 years, patients require new treatment options, particularly when they no longer respond to other therapies. Ramucirumab is a new treatment option that has demonstrated an ability to extend patients’ lives and slow tumor growth.”13

Expanded indication. On November 5, 2014, the FDA expanded the initial indication of ramucirumab to be used alone or with paclitaxel for the treatment of patients with advanced stomach cancer that has progressed with or after previous fluoropyrimidine- or platinum containing chemotherapy.14

On December 12, 2014, the FDA approved ramucirumab to be used in combination with docetaxel for the treatment of patients with metastatic NSCLC that has progressed with or after platinum-based chemotherapy.15 In patients with lung cancer and the EGFR or ALK genetic mutations, ramucirumab should only be used after their disease has progressed while using FDA-approved therapies for these mutations.16

Dr Pazdur commented, “Today’s approval is the third indication that Cyramza has received in 2014.”15 He further stated, “The commitment to study Cyramza in a variety of malignancies provides important treatment options to patients.”15

For patients with advanced gastric cancer, the recommended dose of ramucirumab, either as a single agent or in combination with weekly paclitaxel, is ­8 mg/kg every 2 weeks.16

For patients with metastatic NSCLC, the recommended dose of ramucirumab is 10 mg/kg, administered intravenously on day 1 of a 21-day cycle, before the infusion of docetaxel.16

The REGARD Trial: Gastric Cancer

The REGARD trial was a multinational, randomized, double-blind study that evaluated the efficacy of ramuciru­mab plus best supportive care compared with placebo plus best supportive care and randomized (in a 2:1 ratio) 355 patients with locally advanced or metastatic gastric cancer, including GEJ adenocarcinoma.10,16 The patients (median age, 60 years) received either an IV infusion of ramucirumab 8 mg/kg or placebo every 2 weeks. The primary efficacy end point was overall sur­vival (OS), and the supportive outcome measure was progression-­free survival (PFS).10,16 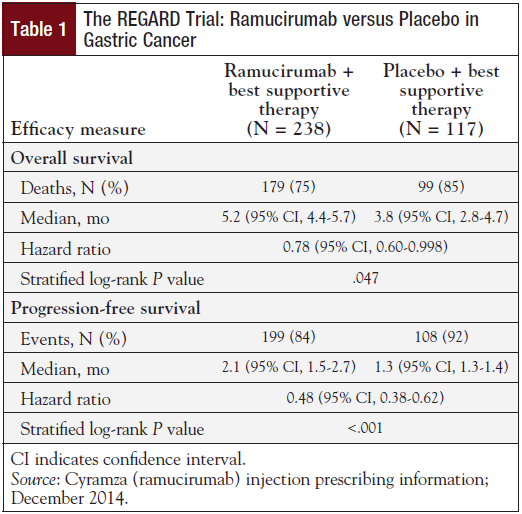 According to the REGARD study investigators, ramucirumab is the first biologic agent given as a monotherapy to demonstrate survival benefits in patients with advanced gastric cancer or GEJ adenocarcinoma that had progressed after first-line chemotherapy.10 The investigators stated that these findings reinforce the importance of targeting the VEGF receptor-2 pathway when treating patients with advanced gastric cancer.10

The RAINBOW trial, a multinational, randomized, double-blind study of ramucirumab plus paclitaxel versus placebo plus paclitaxel, included 665 patients (randomized in a 1:1 ratio) with locally advanced or metastatic gastric cancer (including GEJ adenocarcinoma) who received platinum-­containing and fluoropyrimidine-­containing chemotherapy.11,16 The patients (median age, 61 years) were randomized to receive either ramucirumab 8 mg/kg or placebo as an IV infusion on days 1, 8, and 15 of each 28-day cycle. The primary efficacy outcome measure was OS, and the supportive outcome measures were PFS and objective response rate.11,16 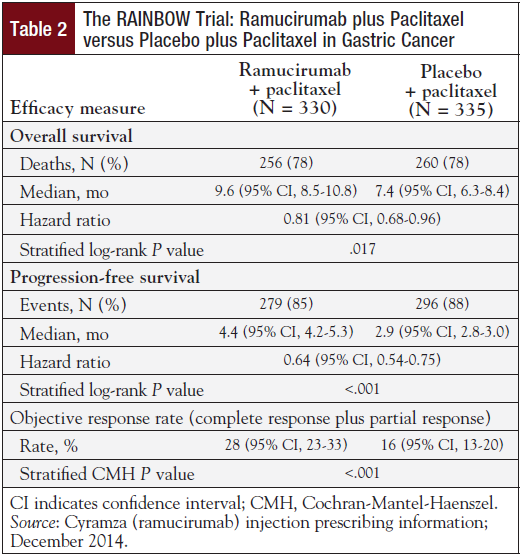 The RAINBOW study’s investigators suggested that ramucirumab plus paclitaxel could be considered a standard second-line treatment option for patients with advanced gastric cancer.11 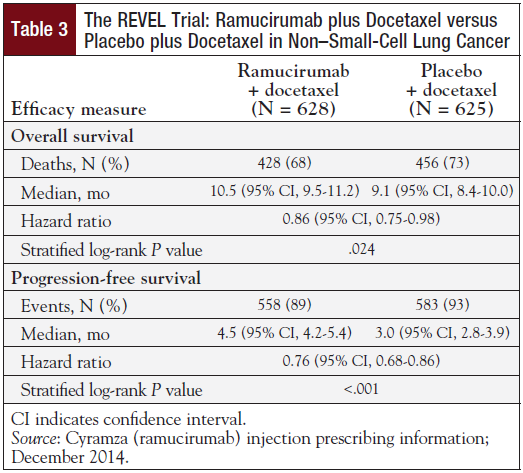 The most common adverse reactions observed in patients treated with single-agent ramucirumab at a rate of ≥10% and ≥2% higher than placebo were hypertension (16%) and diarrhea (14%).16

In patients treated with ramucirumab plus paclitaxel, the most common adverse reactions observed at a rate of ≥30% and ≥2% higher than placebo plus paclitaxel were fatigue/asthenia (57%), neutropenia (54%), diarrhea (32%), and epistaxis (31%).16

In patients receiving ramucirumab plus docetaxel, the most common adverse reactions observed at a rate of ≥30% and ≥2% higher than placebo plus docetaxel ­were neutropenia (55%), fatigue/asthenia (55%), and stomatitis/­mucosal inflammation (37%).16

There are no contraindications associated with ramucirumab.16

Boxed warning. Ramucirumab was approved with a boxed warning about the increased risk for hemorrhage, including severe and sometimes fatal hemorrhagic events. Ramucirumab should be discontinued in patients who have severe bleeding.16

Pregnancy. Based on its mechanism of action, ramucirumab may cause fetal harm. If ramucirumab is used during pregnancy, or if the patient becomes pregnant while taking the drug, assess the potential hazard to the fetus.16

Nursing mothers. It is not known whether ramucirumab is excreted in human milk. Whether the patient should discontinue nursing or discontinue the drug is dependent on the importance of the drug to the mother.16

Pediatric use. The safety and effectiveness of ramucirumab in pediatric patients have not been established.16

Geriatric use. Among patients receiving ramucirumab in the 2 gastric cancer clinical trials, no overall differences in safety or efficacy were observed between patients aged ≥65 years and younger patients.16

In patients with metastatic NSCLC, ramucirumab plus docetaxel showed significant improvements in OS and PFS compared with placebo plus docetaxel, as was demonstrated in the REVEL study.