Patients with newly diagnosed myeloma who received a 4-drug regimen for induction, followed by a 2-drug maintenance approach, demonstrated a significant survival benefit and a significant delay in developing symptomatic disease, according to a study from the Italian Gruppo Italiano Malattie Ematologiche dell’Adulto (GIMEMA) network presented at ASH 2012.

Antonio Palumbo, MD, Chief of the Myeloma Unit at the University of Torino, Italy, credited the good outcomes with a strategy that takes advantage of the synergy between bortezomib (Velcade) and an immunomodulatory drug, in this case thalidomide (Thalomid). He maintained that this duet given during maintenance was a more important factor to survival than the use of 4 drugs during induction.

The 58-center study enrolled 511 patients aged >65 years or aged ≤65 years but not eligible for stem-cell transplant. The investigators compared a 4-drug induction regimen (bortezomib, melphalan [Alkeran], prednisone, thalidomide) followed by 2 years of maintenance therapy with bortezomib and thalidomide (VMPT-VT) with a regimen that included 3 drugs for induction—bortezomib, melphalan, and prednisone (VMP)—and no maintenance therapy.

Cytogenetic abnormalities were identified in approximately 30% of the patients in each arm.

After a median follow-up of 54 months, the risk of progression was reduced by 42% in the experimental arm, and the time to next therapy was reduced by 48%, Dr Palumbo reported. 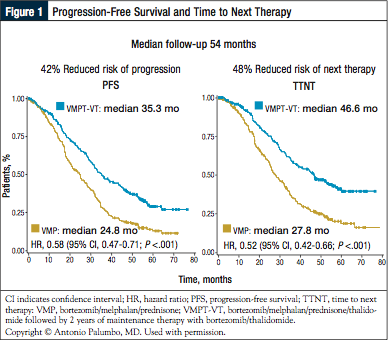 Commenting on the implications of these numbers, Dr Palumbo noted, “We are now able to deliver treatment that can keep disease under control for 4 years, and we can maintain disease in an asymptomatic state.”

The “most striking” observation, he said, is the divergence of the curve during maintenance, and even after maintenance. “When both groups are off treatment, the curves tend to continue to part,” Dr Palumbo noted.

These differences led to an overall survival (OS) advantage with the 4-drug induction plus maintenance therapy. The 5-year OS rates were 61% with VMPT-VT versus 51% for the control arm, representing a 30% reduced mortality risk (P = .01). The median OS has not been reached in the experimental arm, whereas it is 60.6 months in the control arm, he reported. 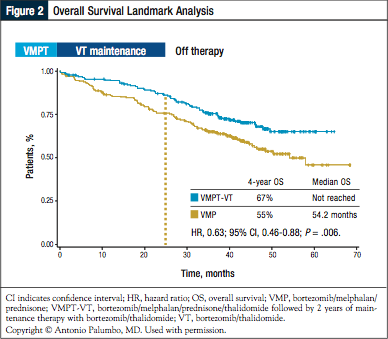 Most of the survival benefit seems to accrue during the maintenance period, he emphasized. The study did not show a survival benefit for the novel regimen from the time of first relapse. In those patients, 3-year OS rates were approximately 47% per arm, and the median OS time was 27 months (Figure 2).

In the prespecified subgroup analysis, the benefit of the 4-drug combination and maintenance was the most obvious in several groups: patients who were aged 65 to 75 years (compared with older patients), in patients with complete responses (vs lesser responses), and in patients with International Staging System stages I and II (vs stage III). He said that the regimen appears to be too toxic for the elderly, who discontinued the study at a higher rate and received a lower dose intensity.

“A proteasome inhibitor in conjunction with an immunomodulatory drug, taking advantage of the synergistic effect, basically doubled the progression-free survival and time to next treatment,” Dr Palumbo emphasized in conclusion. “And more importantly, we were able to keep patients in an asymptomatic condition for up to 4 years.”