Xeljanz: A New Treatment Option for Patients with Rheumatoid Arthritis

Rheumatoid arthritis (RA) is a chronic autoimmune disease characterized by inflammation of the joints and surrounding tissues. The cause is unknown, but some evidence suggests that infection, genetics, and hormone changes may be associated with RA.1 Approximately 1.3 million Americans are estimated to have RA.2 Although RA can occur at any age, the peak age of onset is between 30 and 55 years.1,2 RA affects women 2 to 3 times more than men.1,3

The symptoms of RA usually occur bilaterally, with wrists, fingers, knees, feet, and ankles being the most common sites of disease. RA typically has a slow onset that is characterized by minor joint pain and swelling, stiffness, and fatigue. Over time, the affected joints may develop a restricted range of motion and the joints may become deformed.1 Other symptoms of RA can include chest pain when taking a breath; dry eyes and mouth; burning, itching, and discharge of the eyes; nodules under the skin; numbness, tingling, or burning of the hands and feet; and difficulty sleeping.1

The Economic Burden of Rheumatoid Arthritis
RA is associated with a significant economic burden, including functional impairment and work disability.4 A significantly higher percentage of patients with RA report work disability compared with the general population; 66% of patients with RA lose an average of 39 working days each year.5 The costs to the US economy in terms of work-related disability can amount to billions of dollars annually.6

In 2000, the estimated average annual medical cost associated with RA was $5720 per patient, of which inpatient cost was the largest component.8 This amount is likely to be much higher in 2013. In terms of indirect costs, one study estimated an annual workplace cost of $16,335 per employee with RA; the indirect costs included reduced productivity, absenteeism or disability, and job turnover.9

A Complex Diagnosis
One review suggested that genes may account for up to 60% of the risk of developing RA.4 Susceptibility genes include HLA-DRB1, with a strong link to the presence of anti­cyclic citrullinated peptide (anti-CCP) antibodies. No single test is available to confirm the diagnosis of RA, but most patients with RA will have some abnormal results on different tests.1 However, test results will be normal for some patients. Two helpful tests are the rheumatoid factor test and the anti-CCP antibody test, but at least 30% of patients with RA have negative results on these 2 tests.1,4

Nonbiologic Drugs
The first line of treatment for RA typically entails a nonbiologic disease-modifying antirheumatic drug (DMARD), most often methotrexate. Other nonbiologic DMARDs include leflunomide and chloroquine. Anti-­inflammatory drugs are also used, including aspirin and nonsteroidal anti-inflammatory drugs (NSAIDs), such as ibuprofen and naproxen.1

Although these drugs are effective at relieving symptoms, they have associated side effects. DMARDs require frequent blood tests for monitoring, and long-term use of NSAIDs can cause irritation of the gastrointestinal tract leading to ulcers and bleeding, and, depending on the NSAID used, possibly heart problems. The selective NSAID celecoxib, although effective for pain relief, carries a Boxed Warning about heart disease and stroke.1

Antimalarial medications are some­times used in combination with metho­trexate, but these drugs have a slow onset of action. Corticosteroids are effective at reducing joint swelling and inflammation, but it is advisable to take them at low doses and for short periods because of the potential for long-term side effects.1

Biologic Drugs
Over the past decade or so, biologic DMARDs that target the immune system have become available, and these agents can be extremely effective. Biologics are typically reserved for patients with a suboptimal response to nonbiologic DMARDs or other drugs, and they are typically given subcutaneously or intravenously.1 Although biologic agents are effective in treating RA, they carry the risk of serious infections, secondary leukemia and lymphoma, and psoriasis; monitoring is therefore necessary.1

Tofacitinib Approved for Rheumatoid Arthritis
The most recently approved biologic agent for the treatment of RA is the Janus kinase (JAK) inhibitor tofa­citinib (Xeljanz; Pfizer). Tofacitinib is the first oral biologic agent for RA to become available in more than 20 years.10 The US Food and Drug Administration (FDA) approved tofacitinib in November 2012 for the treatment of adults with moderate-to-severe active RA who have had an inadequate response to, or are intolerant of, methotrexate. The approval of tofacitinib was granted as monotherapy or in combination with methotrexate or other nonbiologic DMARDs.10

Dosing Schedule
The recommended dose of tofacitinib is 5 mg twice daily.12 The drug should be taken orally without food. The dosage should be reduced to 5 mg once daily for patients with moderate or severe renal insufficiency, patients with moderate hepatic impairment, those receiving potent inhibitors of the cytochrome (CY)P3A4 enzyme, and patients receiving 1 or more concomitant medications that result in moderate inhibition of CYP3A4 and in potent inhibition of CYP2C19.12

Clinical Trials Program
The clinical development program for tofacitinib included 2 dose-ranging trials and 5 confirmatory trials. The 2 dose-ranging trials showed that the 10-mg and 15-mg doses achieved a similar American College of Rheumatology 20% criteria for improvement (ACR20) response in patients with active RA. In all 7 trials, the patients who received tofacitinib demonstrated improvement in clinical response and in physical functioning compared with patients who received placebo.12

Confirmatory Trials
Study I was a 6-month monotherapy trial that included 610 patients with moderate-to-severe active RA whose disease had an inadequate response to a nonbiologic or a biologic DMARD. The patients received tofa­citinib 5 mg or 10 mg twice daily, or a placebo. At month 3, all of the patients in the placebo group were randomized in a blinded fashion to tofacitinib 5 mg or 10 mg twice daily. The primary end points at month 3 were the percentage of patients who achieved an ACR20 response, changes in the Health Assessment Questionnaire-Disability Index (HAQ-DI), and a 28-joint Disease Activity Score (DAS28)-4(ESR) <2.6.12

Study II was a 12-month trial that enrolled 792 patients with moderate-to-severe active RA and an inadequate response to a nonbiologic DMARD. The patients received tofa­citinib 5 mg or 10 mg twice daily or a placebo added to background DMARD therapy that did not include potent immunosuppressive treatment.

Study III was a 12-month trial of 717 patients with moderate-to-severe active RA and an inadequate response to methotrexate. Patients were treated with to­facitinib 5 mg or 10 mg twice daily, adalimumab 40 mg subcutaneously every other week, or placebo added to background methotrexate. The placebo-receiving patients were advanced to their second predetermined treatment as in Study II. The primary end points were the proportion of patients who achieved an ACR20 response at month 6, changes in the HAQ-DI at month 3, and a DAS28-4(ESR) <2.6 at month 6.12

Study IV is an ongoing 2-year trial with a planned analysis at 1 year that enrolled 797 patients with moderate-to-severe active RA and an inadequate response to methotrexate. The patients were treated with tofacitinib 5 mg or 10 mg twice daily or with placebo added to background metho­trexate. The placebo-receiving patients were advanced to their second pre­determined treatment as in Study II. The primary end points were the proportion of patients who achieved an ACR20 response at month 6, a mean change from baseline in the van der Heijde–modified total Sharp Score at month 6, changes in the HAQ-DI at month 3, and a DAS28-4(ESR) <2.6 at month 6.12

Study V was a 6-month trial that enrolled 399 patients with moderate-to-severe active RA and an inadequate response to at least 1 approved tumor necrosis factor (TNF)-inhibiting biologic agent. The patients were treated with tofacitinib 5 mg or 10 mg twice daily or placebo in addition to a background methotrexate. At month 3, all of the patients in the placebo group were randomized in a blinded fashion to tofacitinib 5 mg or 10 mg twice daily. The primary end points at month 3 were the percentage of patients who achieved an ACR30 response, changes in the HAQ-DI, and a DAS28-4(ESR) <2.6.

Patient Response in Clinical Trials
All 5 trials had similar ACR20, ACR50, and ACR70 results at months 3 and 6, in that tofacitinib 5 mg or 10 mg twice daily achieved higher response rates versus placebo, with or without background DMARD treatment. Higher ACR20 responses were observed within 2 weeks for tofacitinib compared with placebo. In the 12-month trials, the ACR responses to tofacitinib were consistent at months 6 and 12.12 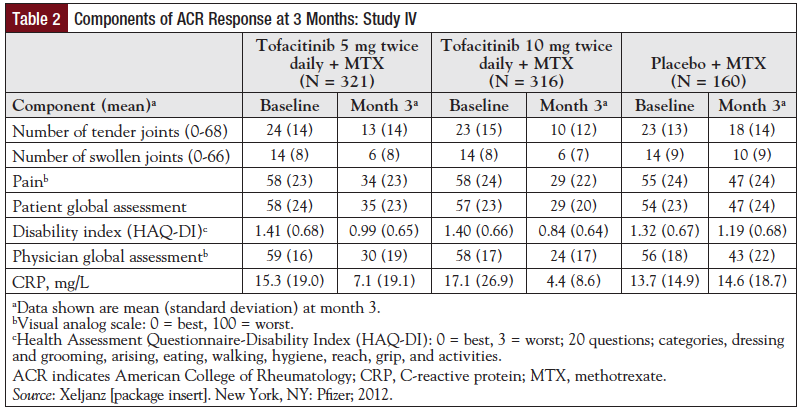 In addition, looking at the separate components of the ACR responses at month 3 (ie, number of tender and/or swollen joints, pain, patient global assessment, HAQ-DI, physician global assessment, and CRP levels), similar results were seen in all 5 studies for patients receiving tofa­citinib versus placebo (Table 2).

In all 5 studies, the tofacitinib-treated patients demonstrated greater improvement in physical functioning as measured by changes in HAQ-DI versus placebo at months 3, 6, and 12.12

Tofacitinib’s Safety Profile
Overall, the use of tofacitinib was associated with an increased risk of serious infections including opportunistic infections, tuberculosis, cancers, and lymphoma. In clinical trials, serious infections were the most common serious adverse event (AE). The percentage of patients who discontinued treatment because of any AE in months 0 to 3 was 4% for tofacitinib and 3% for placebo.12

From months 0 to 3 in the 7 controlled clinical trials, no patient in the placebo group reported malignancy, and 2 patients receiving tofacitinib reported malignancy (excluding nonmelanoma skin cancer). During months 0 to 12, malignancies occurred in 5 patients in the 5-mg twice-daily group and 7 patients in the 10-mg twice­daily group. The most common types of malignancies observed over 12 months of exposure to tofaci­tinib, and in the long-term extension studies, were lung and breast cancer, followed by gastric, colorectal, renal-cell, and prostate cancer, lymphoma, and malignant melanoma.

Abnormal laboratory tests included lymphocytes, neutrophils, liver enzyme tests, lipids, and serum creatinine. Other AEs occurring in at least 2% of the patients were diarrhea, nasopharyngitis, upper respiratory tract infection, headache, and hypertension. There are no adequate or well-controlled studies in pregnant women.12

Patients receiving tofacitinib should be monitored for infection, and treatment should be interrupted if a serious infection develops. Patients should also be evaluated and tested for latent or active tuberculosis before initiation of treatment with tofacitinib. Viral reactivation can also occur. Other warnings and precautions are listed in the package insert.12

Conclusion
Tofacitinib is the most recently FDA-approved oral biologic agent for the treatment of RA. A JAK inhibitor that targets JAK1, JAK2, and JAK3, tofacitinib can be used as a monotherapy or in combination with methotrexate or with other nonbiologic DMARDs in adults with moderate-to-severe RA who have had an inadequate response to methotrexate.