Trends in the 2013 Pharmaceutical Pipeline

Judging by the number of drugs that are currently in the pipeline, drug development may be changing in nature but is not showing real signs of slowing down, despite the many uncertainties in the marketplace and the recent economic instabilities in the United States and worldwide. Overall, the number of new drugs approved by the US Food and Drug Administration (FDA) in 2012 exceeded the total annual approvals in the past decade (with the exception of 2009). And this trend is likely to continue in 2013, based on the number of drugs already approved in the first quarter of the year.

One of the most obvious trends in drug development is the accelerating rate of growth of specialty drugs in the pipeline, with an increasing role for the use of genetics and biologic processes, often high-cost processes that are then translated into high cost for the consumer and/or the health plan or employer. This trend is further reflected in the growth in the annual expenditures on specialty drugs seen in the past few years, with an overall annual growth in specialty drug cost by 17%, which is expected to grow by 22% in 2014, according to the most recent drug report from Express Scripts.1

This trend has been evident in the growing number of FDA approvals for biologic drugs and new molecular entities (NMEs) that have fallen under the specialty drug category in the past 5 years. In 2008 and 2009, more traditional medicines than biologic drugs were approved by the FDA; by 2010, this trend began to reverse, and for the past 3 years (since 2011), more specialty drugs have been approved by the FDA than traditional drugs, with the total number of approvals growing annually (except for a slight drop in 2010).3 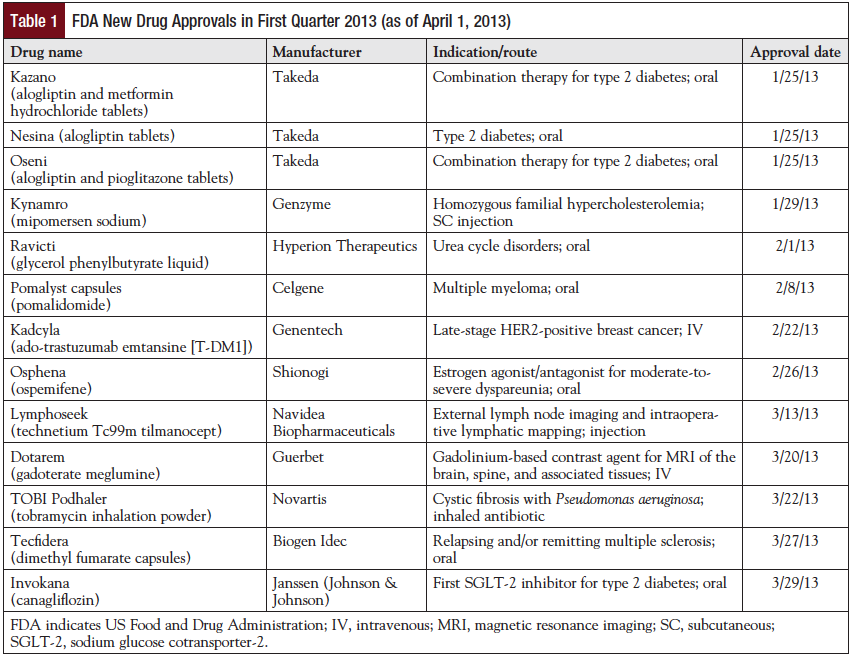 The outlook for 2013 remains promising for drug approvals. As of April 1, 11 new brand-name drugs were approved by the FDA (plus 2 combination drugs that include the antihyperglycemic NME alogliptin [Nesina] that was approved on the same day [Table 1]). This example, and the 1 additional oral drug for type 2 diabetes already approved in 2013, further reinforce the strong position of antihyperglycemic drugs in the pipeline; another significant approval so far in 2013 was an oral NME for multiple sclerosis (MS), highlighting the growing focus on oral therapies.

Growing Focus on Specialty and Oral Drugs
A recent report from the Pharmaceutical Research and Manufacturers of America (PhRMA) indicates that the current drug pipeline is booming with specialty drugs—907 medicines and vaccines are in various stages of development, including drugs in phases 1 to 3 clinical trials and others that are under review by the FDA.4 These 907 new specialty agents are targeting more than 100 different disease states, among them many rare diseases, according to PhRMA.4 Analysis of these specialty drugs in the pipeline reveals that many of them are either monoclonal antibodies (N = 338) or vaccines (N = 250),4 which reflects the increasing role of biotechnology innovation in the research and development of novel drugs.

The gradual but consistent move toward oral medications is evident in many clinical categories. Even among the biologic and specialty drugs, many are now being developed as oral formulations, which raises the old dilemma of benefits versus potential complications for providers and for patients when very specialized medicines, such as cancer drugs, can now be taken by the patient without supervision, thereby introducing the familiar issue of adherence to the clinical mix of cancer management.

Orphan Drugs
Another strong trend evident in the pipeline is the growing number of so-called orphan drugs that target rare diseases. In 2013, the FDA has continued to use its priority review process (which was accelerated last year) to expedite the approval of significant new drugs; this trend is especially apparent in the case of orphan drugs, to facilitate expedited access to unique drugs for patients who have few therapeutic options.

The increasing prevalence of orphan drugs in the pharmaceutical pipeline is further reflected in their share in the overall healthcare expenditures in the past few years. According to one report, the spending on orphan drugs is now at 6% of the total drug spending in the United States, and this trend is expected to continue.5 And although the total pool of patients for genetically based rare diseases is small, affecting an approximate 25 million Americans, many of those orphan drugs have become “blockbusters,” especially among cancer drugs (eg, rituximab, lenalidomide, imatinib, bortezomib).5

Promising Drugs in Late-Stage Development
The key clinical categories in drug development in 2013 resemble the trends seen in the past few years. The disease states with the highest number of drugs in development have not changed much from last year, with only few changes in their “place” in that hierarchy, with cancer drugs leading the way, followed by drugs for central nervous system (CNS) disorders. The approximate numbers of drugs currently in development in the top clinical categories are3: 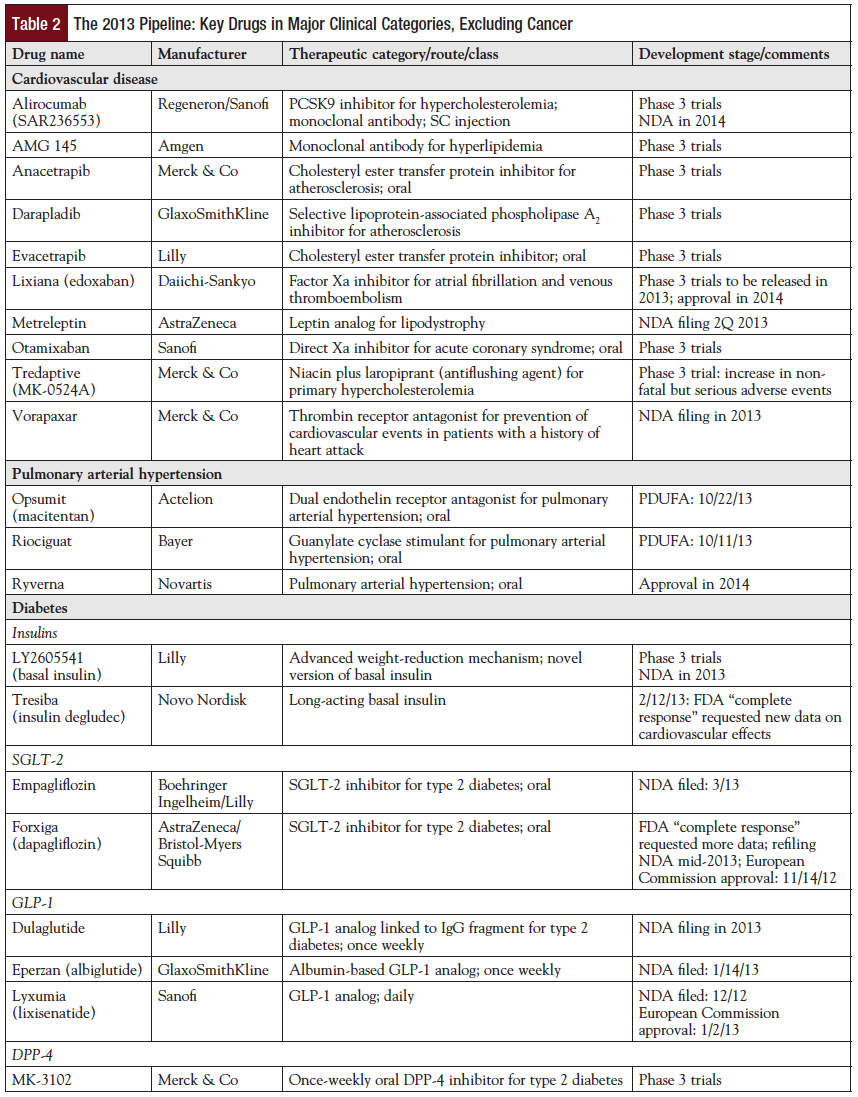 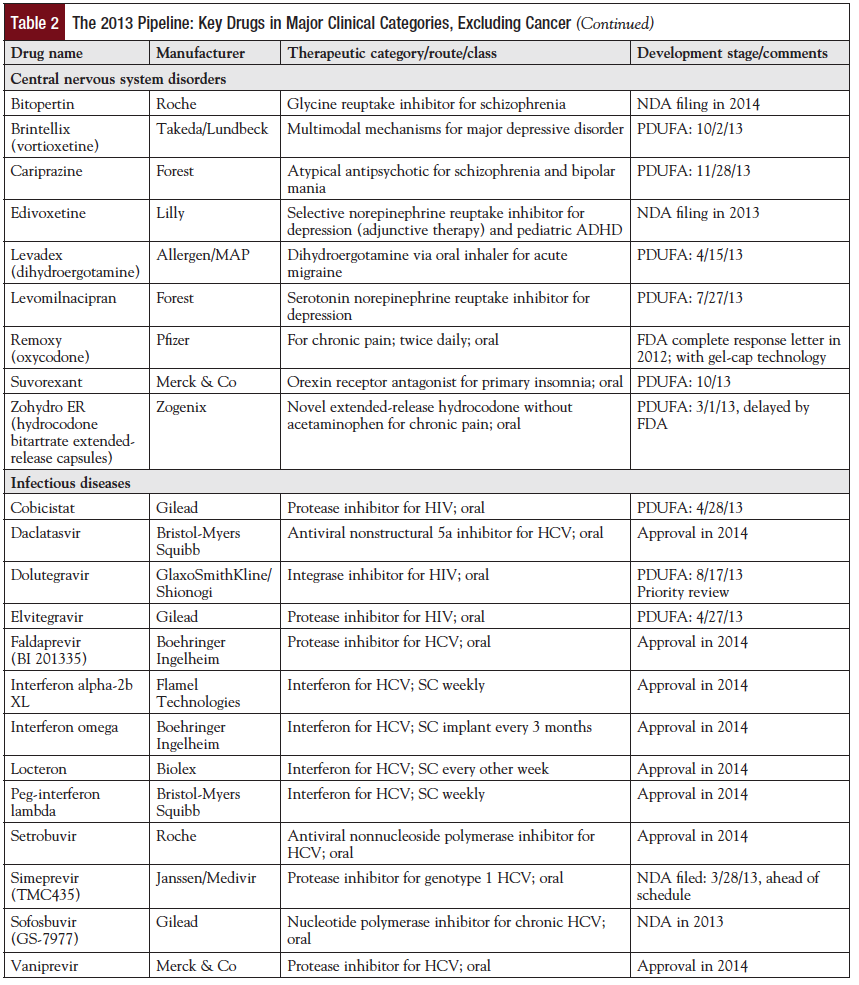 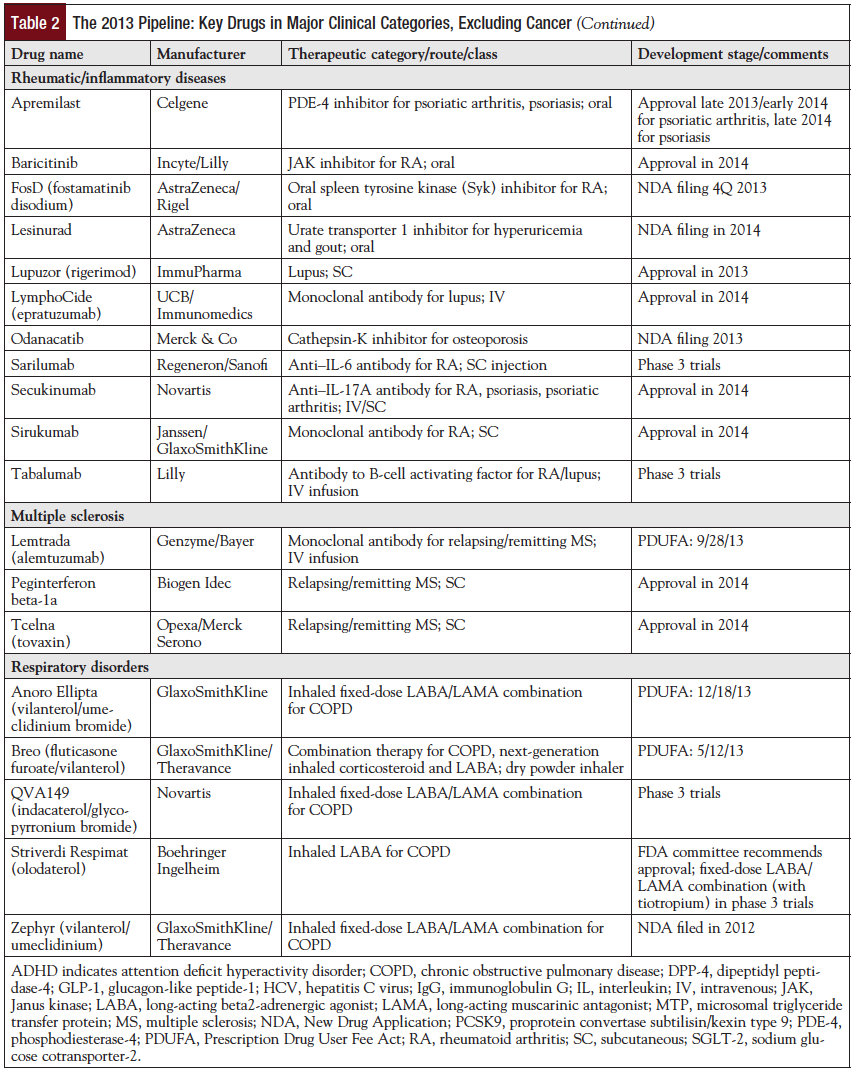 Table 2 lists some of the major products in key clinical categories (excluding cancer drugs) in the pipeline (as of April 1) that are expected to come up for FDA approval in 2013 and in 2014.

CNS Disorders. Only 5 years ago, the number of CNS drugs in the pipeline was almost identical to that of cancer drugs (between 270 and 280). In 2013, that number is 50% lower, although CNS drugs are still second to cancer drugs in terms of sheer numbers in the pipeline. The 5 CNS drugs that are scheduled for approval by the FDA in 2013 (Table 2) include Levadex (dihydroergotamine), an oral inhaler for acute migraine (delayed from last year); levomilnacipran, a serotonin norepinephrine reuptake inhibitor (SNRI) for the treatment of depression, that has shown greater potency and selectivity for norepinephrine than other SNRIs; suvorexant, with a new mechanism of action for primary insomnia; Brintellix (vortioxetine), which has shown mixed efficacy data for major depressive disorders; and cariprazine, an atypical antipsychotic for schizophrenia, with a mechanism similar to Abilify but potentially with an improved safety profile.3

Infectious Diseases. The main activity in 2013 involves new drugs for hepatitis C virus (HCV) infection and HIV infection. The pipeline for HCV infection drugs shows a significant move toward oral therapies, with 5 oral drugs scheduled for FDA approval by 2014; of these, simeprevir is further along in development: a New Drug Application was filed on March 28. In addition, 3 drugs for HIV infection are scheduled for FDA review by August 2013 (Table 2).

Diabetes and Heart Disease. Drugs for diabetes continue to flourish in the 2013 pipeline, reflecting the growing need for improved mechanisms of glucose control for the growing number of patients with type 2 diabetes. On March 29, Invokana (canagliflozin) became the first-in-class sodium glucose cotransporter (SGLT)-2 to receive FDA approval for this patient population. Invokana is expected to generate approximately $416 million in sales by 2016, according to a recent report.6 Earlier in the year, Nesina (alogliptin), an oral dipeptidyl peptidase (DPP)-4 inhibitor was approved, with 2 oral combinations containing alogliptin also approved on the same day. The 2013 pipeline features several SGLT-2 inhibitors, glucagon-like peptide-1 analogs, a novel glargine insulin and insulin degludec, and another DPP-4 (Table 2). Many of these agents may still be approved in 2013, although safety issues have been raised.

Of note, 3 oral drugs for pulmonary arterial hypertension are in late stages of development—the PDUFA date for Opsumit (macitentan) and riociguat is October 2013, and Ryverna may be approved in 2014.

Respiratory Disorders. Several combination therapies are in development for chronic obstructive pulmonary disease (COPD). The 3 COPD drugs likely to be approved in 2013 are Striverdi Respimat (olodaterol) and the 2 combinations Breo (fluticasone furoate plus vilanterol) and Anoro Ellipta (vilanterol plus umeclidinium bromide). The FDA’s advisory committee has already recommended the approval of Striverdi (Table 2).

Rheumatic Diseases. Biologic drugs for rheumatoid arthritis and for other autoimmune diseases continue to have a strong presence in the pipeline; at least 6 drugs for arthritis may be approved in 2013 and 2014 combined, including the oral drugs baricitinib and FosD (fostamatinib disodium), as well as subcutaneous or intravenous sarilumab, secukinumab, sirukumab, and tabalumab, some of which are being studied for several indications; other drugs are in late-stage development for lupus, psoriatic arthritis, gout, and osteoporosis (Table 2).

Multiple Sclerosis. Biologics continue to rule the MS drug arena. In March 2013, Tecfidera (dimethyl fumarate capsules) received FDA approval for relapsing and/or remitting MS and is expected to be priced in the $50,000 annual range, based on the current pricing of MS drugs.  Another promising drug for MS is Lemtrada (alemtuzumab), which is scheduled for FDA review in September. In addition, 2 MS drugs are expected to be approved in 2014 (Table 2). 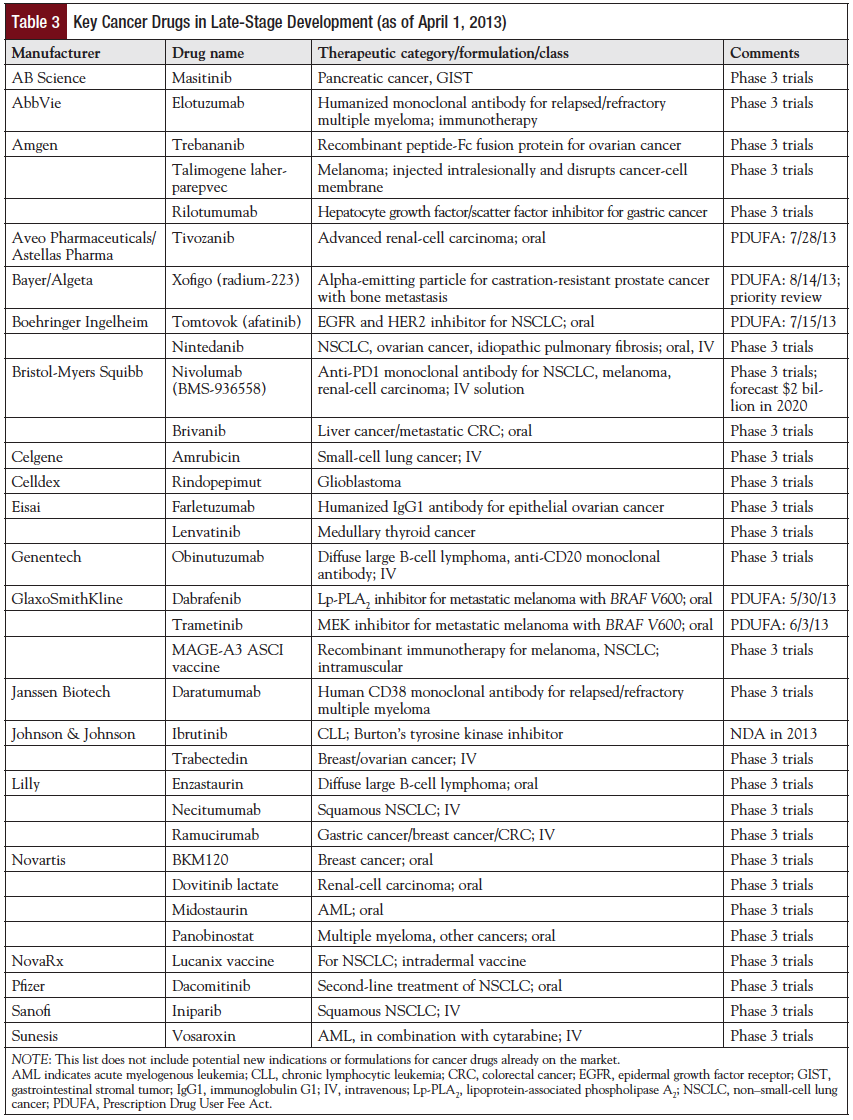 Cancer. In 2013, perhaps not surprising, cancer remains the top clinical category in the drug pipeline, with the most specialty drugs in development (N = 338). Table 3 lists the key cancer and hematologic drugs that are in late stages of development. Several cancer drugs have already been approved in 2013, and more are expected to gain approval later this year.

The growth trend in cancer therapies is likely to continue in the foreseeable future, even as many types of cancers are becoming chronic diseases. It is safe to assume that cancer will remain a priority target for drug manufacturers in the near future, with personalized medicine and companion diagnostics becoming increasingly more prominent: the growing innovation in biotechnology is likely to further enhance that trend.

Conclusion
The year 2013 may not match 2012 in the total number of drugs that are approved by the FDA, but the strong showing in the first quarter of the year suggests that it may come very close to that level (or could it even surpass it?). Despite the growth in generic drug sales, the overall spending on brand-name drugs and new drug development remain strong. Investment in new technologies and the human genome may lead to further innovations in the pipeline in the coming years.