Breast cancer is the most common cancer and the second leading cause of cancer death among women worldwide.1 In the United States, an estimated 39,500 women died of breast cancer in 2011.2

In patients diagnosed with invasive breast cancer between 2001 and 2007, the estimated 5-year survival was 99% for localized disease, 84% for regional disease, and 23% for metastatic breast cancer.3

In addition to the clinical stage of the disease, molecular markers can provide important prognostic information that can help in selecting treatment. These markers include hormone receptor status (ie, estrogen and progesterone) and HER2 expression. Expression of the estrogen receptor (ER) and progesterone receptor (PR) expression confer a more favorable prognosis; the risk of death is 1.5 to 2 times greater in the absence of ER and PR expression.2

These figures represent a projected 27% increase in the medical costs of cancer care in the United States from 2010 to 2020. The largest increases are expected in the continuing phase of care for prostate cancer (42%) and female breast cancer (32%).4

In addition to economics, the diagnosis and treatment of breast cancer, especially in the more advanced stages, are associated with quality-of-life and emotional burdens. Patients have to learn how to manage and organize their medical records, be concerned about paying for treatment, adhere to treatment, and they must be prepared to discuss their cancer with family and close friends, as well as pay attention to good nutritional principles and incorporate exercise into their daily lives.

HER2-Positive Breast Cancer
Overexpression of HER2 (ie, HER2-positive) and triple-negative breast cancer (ie, ER-negative, PR-negative, and HER2-negative status) are associated with a less favorable prognosis. However, the recent availability of HER2-targeted therapies has reversed much of the adverse prognostic impact of HER2 overexpression.2

HER2-Positive Targeted Therapies
In 2006, the US Food and Drug Administration (FDA) approved trastuzumab (Herceptin), the first therapy targeted to the HER2-neu receptor. At first, trastuzumab’s approval was restricted to the treatment of metastatic breast cancer, but the drug was subsequently found to be effective in early-stage HER2-positive breast cancer. In one of the pivotal studies that led to trastuzumab’s approval in the adjuvant setting, trastuzumab reduced the risk of recurrence by 52% and the risk of death by 33% in early-stage HER2-positive breast cancer versus chemotherapy alone.7

In 2010, the FDA approved lapatinib (Tykerb), the second HER2-targeted therapy, which has been shown to be effective in combination with capecitabine for the treatment of HER2-positive advanced breast cancer that has become resistant to trastuzumab.8 The use of lapatinib is limited by its propensity to cause diarrhea, which occurs in approximately 40% of patients who take the drug.9

Pertuzumab’s approval was hailed as “an advancement in the treatment of breast cancer that has not been seen since Herceptin was launched over a decade ago.”11 As with trastuzumab, pertuzumab will be studied earlier in the course of breast cancer as adjuvant therapy in the Adjuvant Pertuzumab and Herceptin in Initial Therapy (APHINITY) trial.

Pertuzumab’s Mechanism of Action
The mechanism of action of pertuzumab is unique and is different from that of trastuzumab. Trastuzumab binds to subdomain IV of the HER2 extracellular domain and exerts its antitumor effects by blocking HER2 cleavage, stimulating antibody-dependent, cell-medi­ated cytotoxicity, and inhibiting ligand-independent HER2-mediated mitogenic signaling.12,13 Despite treatment with trastuzumab, most HER2-positive metastatic cancers will progress, which has motivated the development of new targeted therapies, such as pertuzumab.

Pertuzumab is a humanized monoclonal antibody that binds to the HER2 receptor at a different site than trastuzumab. Pertuzumab prevents HER2 from dimerizing (or pairing) with other potential HER receptor partners, including EGFR/HER1, HER3, and HER4, resulting in decreased downstream signaling.14

Pertuzumab and trastuzumab have complementary mechanisms of action, so when these agents are used together, they achieve a more comprehensive blockade of HER2 signaling and greater antitumor activity than either agent alone in experimental models of breast cancer.15 Phase 2 clinical trials of this combination have borne out activity in HER2-positive metastatic breast cancer.16

Dosing and Dose Modification
The recommended initial dose of pertuzumab is 840 mg, given as a 60-minute intravenous (IV) infusion, followed every 3 weeks by an IV infusion of 420 mg given over 30 to 90 minutes.13

When trastuzumab is given along with pertuzumab, the recommended initial dose of trastuzumab is 8 mg/kg given as a 90-minute IV infusion, followed every 3 weeks by an IV infusion of 6 mg/kg over 30 to 90 minutes.13

When docetaxel is given along with pertuzumab, the recommended initial dose is an IV infusion of 75 mg/m2. If the initial dose is well tolerated, the dose of docetaxel may be escalated to 100 mg/m2, given every 3 weeks.13

If the dose of pertuzumab is delayed or missed, and the time between 2 sequential infusions is less than 6 weeks, the 420-mg infusion should be used. Waiting until the next planned dose is not recommended. If the time between 2 sequential infusions is 6 weeks or longer, the initial 840-mg infusion should be readministered as a 60-minute infusion, followed every 3 weeks by an infusion of 420 mg over a 30- to 60-minute period. The rate of infusion may be slowed or interrupted if a patient experiences an infusion-related reaction. Discontinue the infusion immediately for any serious hypersensitivity reactions.13

If the LVEF has not improved over 3 weeks, or declines further, strongly consider discontinuation of per­tuzumab and trastuzumab.

CLEOPATRA: Phase 3 Clinical Trial
The Clinical Evaluation of Pertuzumab and Trastuzumab (CLEOPATRA) phase 3 clinical trial has led to the FDA’s recent approval of pertuzumab in combination with trastuzumab plus docetaxel in the treatment of metastatic breast cancer.16

Trial Design
The study was a prospective, randomized, double-­blind, placebo-controlled trial conducted from February 2008 through July 2010, at 204 centers in 25 countries. Patients with HER2-positive metastatic breast cancer were randomized in a 1:1 ratio to receive either placebo plus trastuzumab plus docetaxel (control arm) or pertuzumab plus trastuzumab plus docetaxel (experimental arm). Patients were stratified according to geographic region (Asia, Europe, North America, or South America) and previous treatment status (previous adjuvant or neoadjuvant therapy, or no prior therapy).

Progression-free survival (PFS) was the primary end point; this was defined as the time from randomization to the first documented radiographic evidence of progressive disease according to Response Evaluation Criteria in Solid Tumors (RECIST) criteria or death from any cause within 18 weeks after the last assessment of tumors. Secondary end points were overall survival (OS), investigator-­assessed PFS, the rate of objective response, and safety.16

Patient Population
The study enrolled 808 patients with documented locally recurrent, unresectable, or metastatic HER2-positive breast cancer. HER2 status was determined centrally by means of immunohistochemistry or fluorescence in situ hybridization testing. Patients with measurable or and nonmeasurable disease were eligible for the study. 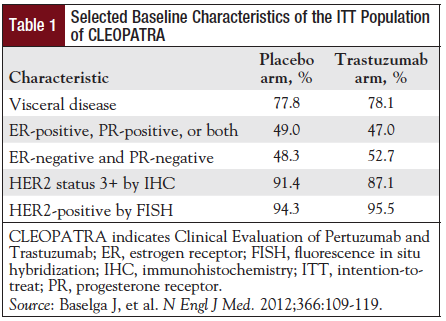 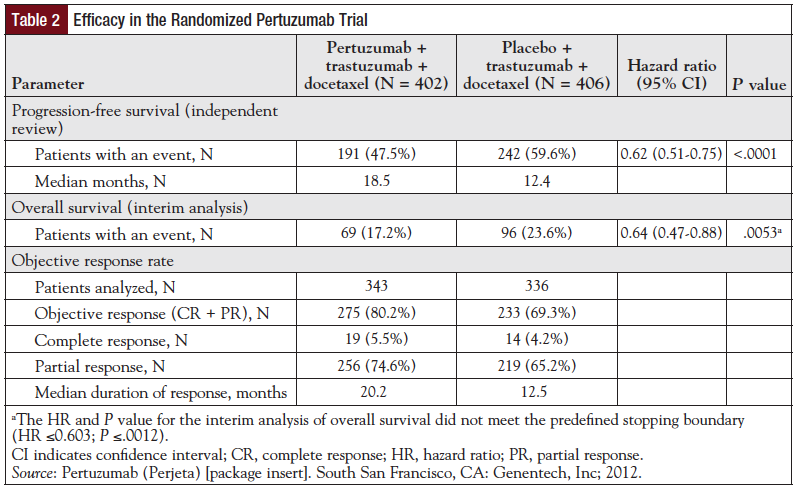 An interim analysis of OS was performed after 165 events occurred; 96 deaths were reported in the control group versus 69 in the pertuzumab arm, a difference that did not meet the prespecified boundary for statistical significance. At a median follow-up of 19.3 months, a strong trend was observed toward a survival benefit with the pertuzumab combination. Both groups were followed up for a median of 19.3 months.16
The objective response rate was 69.3% in the control arm versus 80.2% in the pertuzumab arm.16 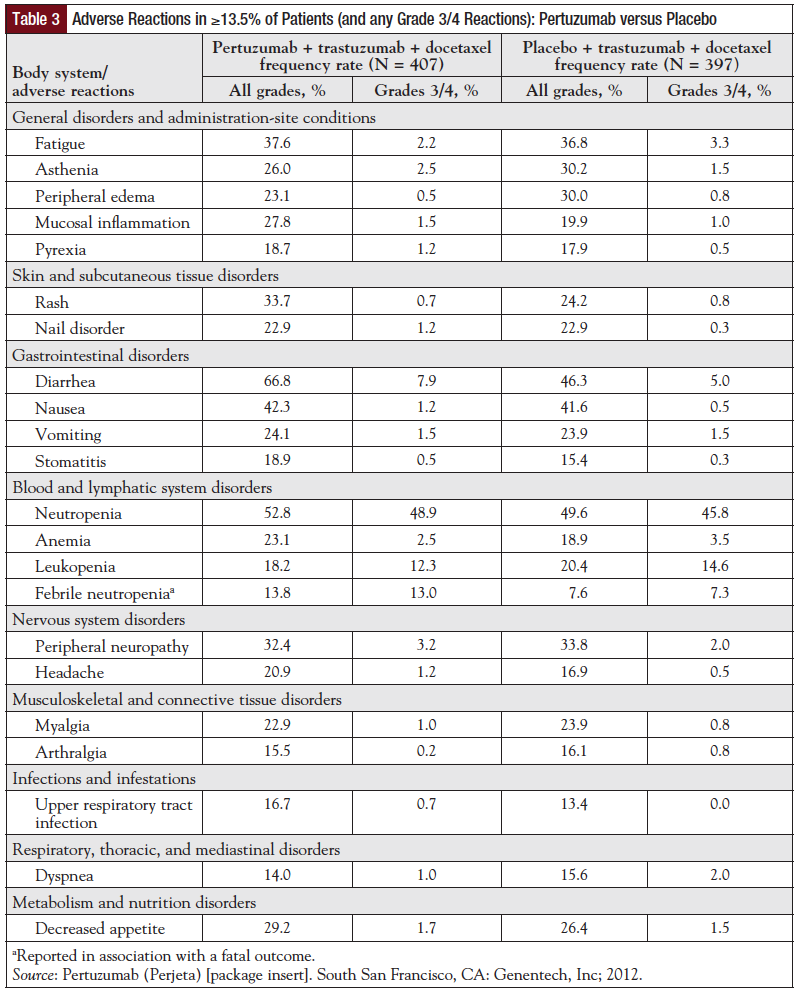 Safety Profile
Pertuzumab did not appear to add appreciable toxicity to trastuzumab plus docetaxel. The safety profile was generally similar in the 2 treatment arms (Table 3). No increase in left ventricular systolic dysfunction was observed when pertuzumab was included in the treatment. Adverse events that were at least 5% higher in the pertuzumab arm than in the control arm included diarrhea, rash, mucosal inflammation, febrile neutropenia (FN), and dry skin.16

The rates of grade 3 or 4 FN and diarrhea were higher in the pertuzumab arm than in the control arm, with FN occurring in 13.8% versus 7.6% of patients, respectively, and diarrhea in 7.9% versus 5% of patients, respectively. The incidence of grade 3 or higher FN among Asian patients was 12% for controls and 26% for the pertuzumab arm; in patients from all other geographic regions, the rate of FN was ≤10% in both treatment arms. Most of the deaths were a result of disease progression. The number and causes of other deaths were generally well balanced between the 2 arms. Infections were the most common cause of death resulting from an adverse event.16

Warnings and Precautions
Although there are no absolute contraindications to pertuzumab, the FDA approved pertuzumab with a Warning Box regarding the risk of death and severe adverse effect to a fetus associated with this drug. Pertuzumab should not be taken during pregnancy. Before the initiation of pertuzumab, patients should be assessed for pregnancy and should be advised to use contraception during and after treatment with pertuzumab. Women who are inadvertently exposed to pertuzumab during pregnancy should consult the Genentech Adverse Event Line and are encouraged to enroll in the MotHER Pregnancy Registry.13

Although trastuzumab treatment has been reported to lead to decreased LVEF, pertuzumab does not appear to have additive harmful effects on LVEF. When pertuzumab was used in combination with trastuzumab and docetaxel in the CLEOPATRA trial, left ventricular dysfunction was seen in 4.4% versus 8.3% of patients in the placebo arm (ie, placebo plus trastuzumab plus docetaxel); and congestive heart failure was reported in 1% versus 1.8% of patients, respectively. Risk factors for decreased LVEF include previous exposure to anthracyclines or previous radiation to the chest wall.13

Pertuzumab has not been studied in patients with suboptimal pretreatment LVEF values or other conditions associated with impaired LVEF, which include uncontrolled hypertension, recent myocardial infarction, serious cardiac arrhythmia, or a cumulative previous exposure to anthracycline >360 mg/m2 doxorubicin or its equivalent.

In patients who are taking pertuzumab, LVEF should be monitored at baseline and then every 3 months to ensure that the LVEF is within normal limits.13

Conclusion
The availability of increasing numbers of therapeutic options for the treatment of HER2-positive breast cancers provides hope to patients and challenges to clinicians as they determine the optimal use of these agents in combinations and in sequences. The FDA’s approval of pertuzumab for women with HER2 metastatic breast cancer provides an additional therapeutic option for patients, with a new mechanism of action and improved duration of PFS, a welcome addition for this patient population.