Constipation is the most common gastrointestinal (GI) complaint in the United States, affecting between 2% and 28% of the population.1 Although it is usually relatively benign, the condition can be serious and can negatively affect a patient’s quality of life, as well as the ability to perform daily activities and overall work productivity.2

Constipation represents a substantial economic burden on the US healthcare system.3,4 Constipation can have various etiologies, and diseases and conditions associated with constipation can be difficult to diagnose and to treat.3

Laxatives are the mainstay of treatment for patients who self-diagnose constipation. More recently, newer drugs have been approved for the treatment of constipation in association with irritable bowel syndrome (IBS) and chronic idiopathic constipation.3

Irritable Bowel Syndrome
IBS affects between 25 million and 55 million people in the United States, the majority of them female. IBS is often described as constipation predominant, diarrhea predominant, or an alternating pattern of constipation and diarrhea. Each of these types accounts for approximately 33% of all people with IBS.5

An estimated 13 million Americans have IBS with constipation, which is considered a chronic GI disorder with symptoms that can be severe enough to compromise one’s ability to carry out daily activities.

IBS with constipation is associated with a substantial economic burden related to the direct costs of care and the indirect costs, including reduced employment and work productivity.6

The symptoms associated with IBS include recurrent abdominal pain associated with defecation or a change in bowel habits with features of abnormal defecation that can include diarrhea, excess bloating, and either harder or looser stools than normal (hard stools in >25% of bowel movements and soft/watery stools in <25%).5

According to the Rome III criteria for IBS, the symptoms of IBS involve recurrent abdominal pain or discomfort and a marked change in bowel habits for at least 6 months, with symptoms experienced on at least 3 days within at least 3 months.7 Two or more of the following symptoms must apply for the diagnosis of IBS:

The causes of IBS are not completely understood. The proposed causes of IBS include bowel motility problems, hypersensitivity of the colon, dysregulation of neuro­transmitters, and hormonal factors. None of these presumptive causes has been established with certainty. The triggers of IBS include specific foods, medications, the presence of gas or stool, and emotional stress.

The Rome III diagnostic criteria for chronic idiopathic constipation include the onset of ≥2 of the following symptoms for at least 6 months7:

Newer drugs developed for the treatment of chronic idiopathic constipation over the past decade include prucalopride (Resolor) and lubiprostone (Amitiza). A meta-­analysis of randomized controlled trials of laxatives and some of these newer agents conducted in 2010 showed that laxatives (with the exception of lactulose) and the newer agents were more effective than placebo in the treatment of chronic idiopathic constipation.9 The most recent agent was approved at the end of 2012.10

Linzess Receives FDA Approval
Linaclotide (Linzess; Ironwood Pharmaceuticals/Forest Laboratories) was approved in December 2012 by the US Food and Drug Administration (FDA) for the treatment of constipation in adults in association with IBS or chronic idiopathic constipation. Linaclotide’s approval is limited to treatment of adults; the drug should not be used in pediatric patients or in patients younger than age 17.10

Linaclotide is the only FDA-approved guanylate cyclase-C (GC-C) agonist that acts locally in the intestinal tract. Furthermore, linaclotide is the first new FDA-­approved treatment option for adults with constipation in 6 years.

Mechanism of Action
Linaclotide is believed to exert its effects via 2 mechanisms. The drug binds to the GC-C receptor within the intestinal epithelium. Activation of GC-C leads to increased secretion of intestinal fluid and then transit through the intestinal tract, as well as reduced visceral pain, which is mediated by reduced activity of sensory nerves that are involved in the perception of pain.5

Clinical Trials Data with Linaclotide
Randomized, placebo-controlled clinical trials with a total of more than 2800 adults demonstrated that linaclotide alleviated abdominal pain in patients with constipation-predominant IBS and improved the frequency of bowel movements in these patients, as well as in patients with chronic idiopathic constipation.11

Trials 1 and 2: IBS with Constipation
Two double-blind, placebo-controlled, randomized, multicenter trials established the efficacy of linaclotide for the management of symptoms of IBS with constipation. Trial 1 and Trial 2 enrolled 800 and 804 patients, respectively, who met the Rome II criteria for IBS, and randomized them to treatment with linaclotide 290 mcg or placebo once daily.11

Both trials had identical designs for the first 12 weeks; after that, Trial 1 included a 4-week randomized withdrawal period and Trial 2 continued double-blind treatment for 14 additional weeks, for a total of 26 weeks. 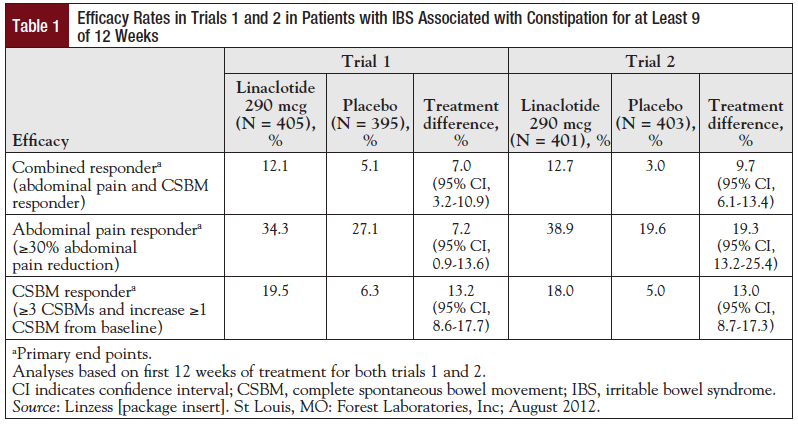 Efficacy was based on responder analyses and change from baseline based on individual patient diaries. Efficacy end points included analysis of response for at least 9 of the first 12 weeks of treatment or at least 6 of the first 12 weeks of treatment (Table 1). Both end points, which were complex, required at least a 30% reduction from baseline in mean abdominal pain and an increase in complete spontaneous bowel movements. For all efficacy end points, the percentage of patients who responded to linaclotide 290 mcg was statistically superior to placebo.

Trials 3 and 4 had identical designs. Trial 3 also included an additional 4-week withdrawal period. As in Trials 1 and 2, efficacy was based on overall responder analyses and change from baseline end points according to patients’ daily diaries. The higher dose (ie, 290 mcg) of linaclotide did not offer any benefit over the 145-mcg daily dose in these trials, so the 145-mcg daily dose has been deemed the appropriate and recommended dose.

Adverse Events and Precautions
Linaclotide should not be used for children under age 17 years or for patients with known or suspected obstruction of the GI tract.11 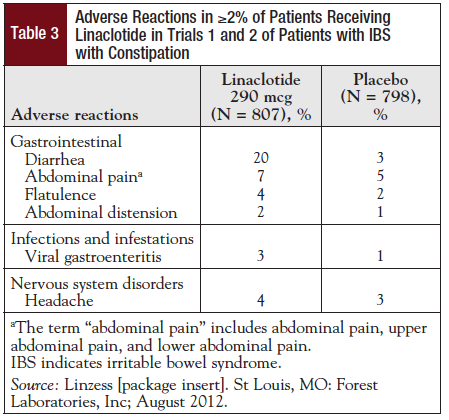 Pooled data from Trials 1, 2, 3, and 4 show that diarrhea was the most common adverse event related to linaclotide. Severe diarrhea occurred in 2% of the linaclotide-treated patients in these clinical trials, with a similar incidence in patients with IBS with constipation and those with chronic idiopathic constipation (Table 3).11

In the pooled IBS-with-constipation pivotal trials, diarrhea was reported in 20% of the linaclotide-receiving patients and in 3% of the placebo-receiving patients. Severe diarrhea was reported in 2% and 1%, respectively, of the patients. Diarrhea-related treatment discontinuations occurred in 5% of those randomized to linaclotide versus <1% of the placebo group.