An unprecedented complete or partial resolution of bone metastases was observed with the investigational tyrosine kinase inhibitor cabozantinib in a trial of men with metastatic castration- resistant pr ostate cancer. 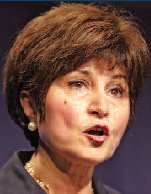 Cabozantinib is a dual inhibitor of the tyrosine kinases MET and vascular endothelial growth factor receptor (VEGFR) 2. MET is upregulated in many tumor types and promotes tumor cell invasion and metastasis. Both MET and the VEGFR2 signaling pathways appear to direct crosstalk between tumor cells, osteoblasts, and osteoclasts, said Dr Hussain.

Randomization was suspended after 122 patients, based on the high rate of clinical activity of cabozantinib; 79 men had at least a partial response and entered the open-label extension phase and 31 with stable disease entered the randomized portion of the trial. The disease control rate (no progression) at week 12 was 68%.

The safety and tolerability of cabozantinib were consistent with previous experience with the drug. In the lead-in phase, the most common grade 3 adverse event was fatigue (in 16% of patients). Adverse events necessitated cabozantinib dose reduction in 51% of the patients.

Of the 83 patients with bone metastases and bone pain at baseline, 68% had improvement of pain at either week 6 or 12. Of the 67 patients who required narcotic analgesics at baseline to control bone pain, 70% were able to decrease or discontinue narcotic medication for bone pain.

Of 67 patients assessable for postbaseline review of narcotic consumption, 47 (70%) were able to decrease or discontinue narcotic medication for bone pain.