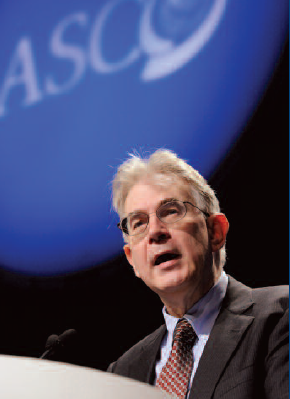 A new era of cancer care, in which genomic advances alter the landscape of cancer care and clinical research, is emerging. As “genomic chaos” rules this landscape, the healthcare system must be prepared to incorporate genetic technology into cancer care, and clinical trial design must adapt as well, said George W. Sledge, Jr, MD, American Society of Clinical Oncology (ASCO) President and Professor of Oncology, Indiana University Melvin and Bren Simon Cancer Center, Indianapolis, in his presidential address at the 2011 ASCO Annual Meeting in Chicago, IL. Targeted therapies marked a true breakthrough in cancer treatment. DNA sequencing technology represents the next frontier, and the technology is becoming less expensive and more powerful at an alarming rate: companies are already marketing a person’s genome delivered on a USB drive, although the price is still substantial, Dr Sledge said.

Preparing for the Coming Challenges

“What happens when the next 10 patients you see require 8 different combinations based on their tumor genomes? Our current system is not designed to handle genomic chaos,” Dr Sledge said. Although the data will help inform physicians about a given patient’s tumor biology, at the same time cancer management will become “very, very complicated…we will ac - tually be able to measure the degree and kind of mutations in an individual’s tumor.”

In the not-too-distant future, patients will walk into physicians’ offices with a memory stick “loaded with gigabytes of personal genomic data.”

Although the rate of cancer deaths has decreased partly as a result of better application of diagnostics, new systemic treatments, and a decline in tobacco use, a rising tide of cancer in an aging population will challenge that trend, he said. A rapid increase in therapeutic options will push demand for cancer care. Soon, the demand for care will exceed the number of providers, providing yet another challenge. Add in the rising cost of cancer care and the decline in the number of physicians willing to conduct clinical investigations, and cancer care in the coming years looks particularly daunting. 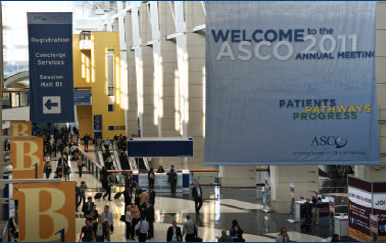 The first complete sequencing of human cancer genomes was published only 3 years ago. “Today, as a result of efforts such as the National Institute of Health’s Cancer Genome Atlas Project and the International Cancer Genome Consortium, several thousands of cancers covering 20 major tumor types are being sequenced,” he said. “Such large-scale sequencing will rapidly change our understanding of cancer biology, it will identify new targets in previously hard to treat diseases, and it will explain the causes of drug resistance. Within the next few years, perhaps by the end of this decade, we will likely see the beginning of pop ulation-based deep sequencing of patients’ tumor genomes.”

The promise of the genomic era was revealed in a recent article (Welch JS, et al. JAMA. 2011;305:1577-1584), in which deep sequencing of a pa - tient’s leukemic cells was used to select a retinoic acid inhibitor therapy.

“We can look forward to a future in which the unraveling of the secrets of the genetic code is commonplace, expected, and routinely drives care,” said Dr Sledge. “But this case, as wonderful as it is as a harbinger of our collective future, is not the whole story. Not every story will end this happily.”

The problem is that cancers are segregating into “stupid cancers” and “smart cancers.” “Stupid cancers have a single dominant mutation and a small mutational load,” he said. “Tar - geting that dominant driver is regularly effective, and resistance is rare, often occurs late, and can frequently be reversed via other attacks on the same pathway. Smart tumors have multiple simultaneous drivers, carry a large mutational load, and require the targeting of multiple drivers. Resistance is common in smart cancers and occurs early into treatment.”

Mutation rates can vary between cancers by >1000-fold. Several hematologic and childhood tumor types have <1 mutation for every 1000 bases, whereas melanoma, head and neck, colorectal, lung, and squamous-cell cancers have a median close to 10 mutations per 1000 DNA bases and can reach 100.

Chronic myelogenous leukemia is an example of a stupid cancer, with an easy target that is treated effectively by imatinib.

An example of a smart cancer is non–small-cell lung cancer (NSCLC) caused by cigarette smoking. In one study, investigators determined that a patient’s tumor had 1 mutation for every 3 cigarettes smoked. Agents such as crizotinib work preferentially in NSCLC in nonsmokers, who have a lower mutational load.

With many gene mutations occurring at frequencies <5%, cancers can be considered as a “whole series of orphan diseases,” each requiring a different treatment. There will be no magic bullet for these tumors.

Investigating treatments for cancers with multiple drivers (kinases) is an enormous task. With 2 drivers that would require 2 tyrosine kinase inhibitors to treat, for example, 154 patients would have to be screened to find 1 relevant patient. “Who in their right mind would screen 154 patients to enter 1 into a clinical trial? And forget 3-drug combinations of novel agents,” said Dr Sledge.

In this new era, ASCO must be committed to advance into the field of health information technology [HIT], a concept known as the “rapid learning system.” “HIT will be central to the rapid learning system in the genomic era. Doctors will need real-time access to clinical data from all practice settings. This, in turn, will require interoperable databases using common terminology,” Dr Sledge concluded.