Health Insurance Premium Increases for the 5 Largest School Districts in the United States, 2004-2008

Background: Local school districts are often one of the largest, if not the largest, employers in their respective communities. Like many large employers, school districts offer health insurance to their employees. There is a lack of information about the rate of health insurance premiums in US school districts relative to other employers.
Objective: To assess the change in the costs of healthcare insurance in the 5 largest public school districts in the United States, between 2004 and 2008, as representative of large public employers in the country.
Methods: Data for this study were drawn exclusively from a survey sent to the 5 largest public school districts in the United States. The survey requested responses on 3 data elements for each benefit plan offered from 2004 through 2008; these included enrollment, employee costs, and employer costs.
Results: The premium growth for the 5 largest school districts has slowed down and is consistent with other purchasers—Kaiser/Health Research & Educational Trust and the Federal Employee Health Benefit Program. The average increase in health insurance premium for the schools was 5.9% in 2008, and the average annual growth rate over the study period was 7.5%. For family coverage, these schools provide the most generous employer contribution (80.8%) compared with the employer contribution reported by other employers (73.5%) for 2008.
Conclusion: Often the largest employers in their communities, school districts demonstrate a commitment to provide choice of benefits and affordability for employees and their families. Despite constraints typical of public employers, the 5 largest school districts in the United States have decelerated in premium growth consistent with other purchasers, albeit at a slower pace.

Local school districts are one of the largest employers in the United States, employing roughly 8 million employees in 2008.1 Locally, they are often one of the largest (if not the largest) employers in the communities they serve. Like many large employers, school districts offer an array of benefits to their employees, including health insurance. Employee benefits comprise 34.3% of total compensation for publicsector employees,2 with health insurance representing 10.9% of total compensation.2

Public Employer Characteristics
Carolyn Watts and colleagues highlighted some of the unique constraints public employers face, including balancing budgets in a political climate, a unionized workforce, and the ever-present consideration of the taxpayer impact of any financial decision.3 School districts experience these same constraints. In addition, they shoulder the social responsibility that accompanies being the largest employer, and they must consider the impact their financial decisions have on wages, employment, and take-up rates.

The recent economic crisis has been particularly difficult for public employers, because tax revenues have sharply declined, and the competition for dwindling financial resources has intensified. School districts increasingly face intense pressure to balance various stakeholders' needs and continue to offer affordable and competitive health benefits to their workforce. Although surveys have reported slowing growth trends for health insurance premiums for purchasers in general,4 the specific experience related to health insurance premiums in major school districts has not been analyzed.

The combined 2008 health insurance premium for these school districts was nearly $4.9 billion, which provided coverage for 534,237 insured enrollees. In comparison, according to James Loftin, Research Program Specialist for the California Public Employees' Retirement System (CalPERS), CalPERS is the third largest purchaser of employee health benefits in the United States,10 providing coverage for 588,019 enrollees and $5.5 billion in premiums in 2008.11 Echoing Carolyn Watts and colleagues' commentary,3 public employers have the ability to influence the market because of their purchasing power. Similarly, school districts have the potential to be market leaders in their communities and leverage their purchasing power to maximize coverage and affordability for their employees and dependents.

Study Data and Methods
Data for this study were drawn exclusively from a survey sent to the 5 largest school districts in the United States.12 The survey requested 3 data elements for each benefit plan offered from 2004 through 2008, including enrollment, employee costs, and employer costs. All 5 school districts responded.

Enrollment
Enrollment figures for each distinct benefit plan and rate tier were requested. As used in the survey, rate tier represents the distinct monthly rate charged based on the number of dependents covered by an employee. For example, a 3-tier rate charges a different monthly premium for employee-only coverage, for employee plus 1 dependent coverage, and for employee plus =2 dependents coverage. Single coverage is health insurance that covers the employee only. The study defined family coverage as coverage for a family of 4. If a rate for a family of 4 is not offered, family coverage is considered coverage other than single coverage. Average single and family premiums were weighted by number of employees.

NYSD is part of the City of New York benefits program, which provides coverage for 3 categories of employees—civilian nonpedagogical, uniformed, and the Department of Education. Enrollment data for the Department of Education employees, however, were unavailable. The analyzed enrollment data reflect all the employees covered by the City of New York's health insurance policy. Rates and benefits are the same for all 3 categories of employees, and therefore are included in the survey.

For CCSD, the analysis includes rates, benefits, and enrollment for the Clark County Teachers Health Trust. This is a self-funded health trust that provides benefits to all licensed employees (ie, teachers) of the CCSD.13 The welfare trust is funded by the CCSD, and therefore is included in this analysis.

Premium Rates The survey captured the monthly premium rates charged by insurers for each benefit plan and rate tier. If the benefit plan was self-funded, the survey requested the equivalent fully insured monthly rates. Rates are inclusive of medical, pharmacy, and behavioral health benefits.

The survey requested the cost of health insurance charged to employees, by benefit plan and rate tier, net of any employer subsidy. Employee costs are referred to as employee premiums. CPS employee premiums vary depending on employees' salaries. Employee premiums are determined as a percentage of the employee's salary. To estimate employee cost, the analysis calculated the average salary for all district employees using financial records from CPS.14 Aggregate salary data for all school district personnel were divided by the total number of positions as reported in the financial records.

The employer's share of premium was determined by calculating the net difference between employee premiums and insurance premiums. This calculation provides the implicit school district employer contribution toward employee health insurance, because some school districts provide additional financial contribution (ie, "flex" dollars) in excess of the premium rates charged.

LAUSD, CCSD, and MDCPS policy years coincide with a calendar-year period. MDCPS was primarily on a calendar year policy, except for 3 months in 2006 during which there was a midyear premium change. CPS changed to a calendar-year policy beginning in 2005; only calendar year 2004 was calculated using 2 distinct policy periods. NYSD is on a July through June policyyear basis for the study period.

All data were reviewed for reasonableness and consistency, and it was determined that these data were sufficiently reliable. 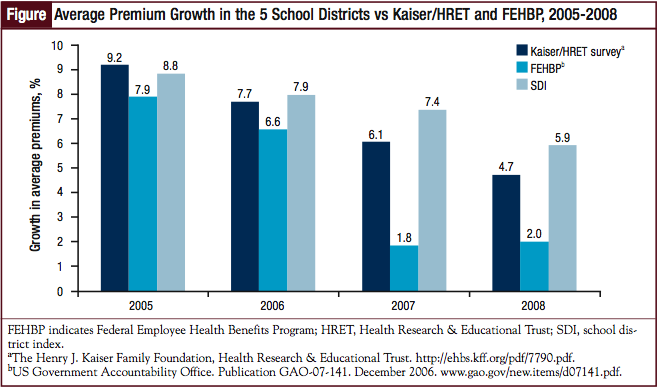 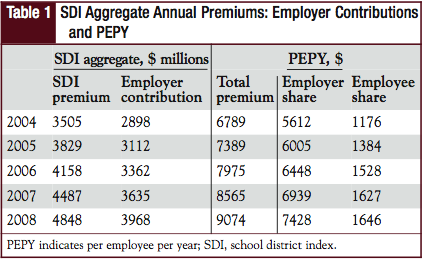 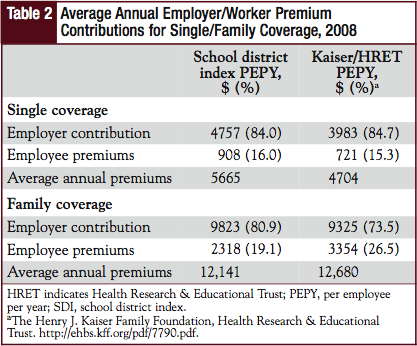 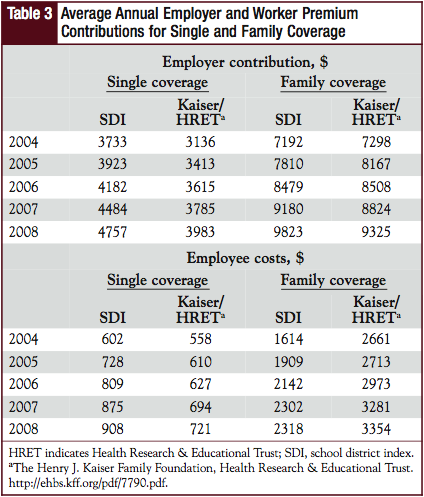 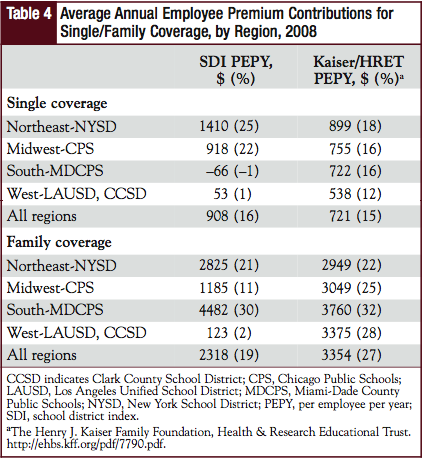 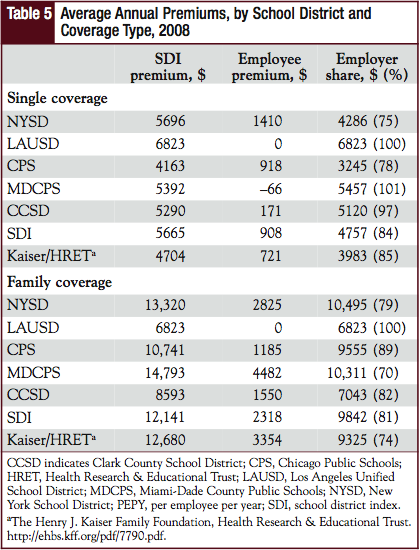 There are notable variances in employee premiums and employer contributions within the 5 school districts, as demonstrated in Table 5. LAUSD provides the most generous subsidy, paying 100% for either single or family coverage. MDCPS contributes slightly more than 100% for single coverage by providing an additional financial incentive for certain benefit plans. MDCPS provides "flex" dollars, ranging from $10 to $50 per employee per month if employees select an HMO plan. However, MDCPS contributes the least of the school districts surveyed, in terms of employer share, toward family coverage.

Although MDCPS's employer share as a percentage of family coverage premium was low in terms of total contribution (70%), MDCPS's commitment was the second highest of the evaluated school districts ($10,311 PEPY), with only NYSD having a higher total employer contribution ($10,495 PEPY) toward family coverage.

The average annual employee cost in MDCPS for family coverage—$4482 PEPY—is the highest of the analyzed school districts, and 19.2% higher than other purchasers in the region.

The Kaiser/HRET survey reports that 36% of the workforce is enrolled in family coverage. Only 8.4% of MDCPS employees elected family coverage in 2008. Compared with the other school districts surveyed, MDCPS supports the highest annual premium cost ($14,793 PEPY) for family coverage (Table 5). The drivers responsible for these high costs could not be determined from the data provided by the schools and are beyond the objectives and scope of this article.

On average, the school district's share of health insurance premium for family coverage is more generous than other purchasers, with the notable exception of MDCPS. An opportunity exists to increase take-up rates for family coverage in this South Florida school district, which is the largest employer in a community with the highest uninsured rate (28.7%) in the state.16 Two school districts, LAUSD and CPS, reflect progressive approaches toward maximizing coverage and affordability. LAUSD's decision to subsidize 100% of the insurance premium is the most generous contribution method of any of the school districts reviewed.

Stakeholder Perspective
Health Insurance Premium Increases for Large Employers
F. Randy Vogenberg, PhD, FASHP
When it comes to employers, although most attention is placed on Fortune 500 companies, large local employers are key players in healthcare policy and benefits. As Mr Cantillo points out in his article, school districts are among the largest employers in the country, but little has been published about their experience with healthcare benefits and premium costs.

Results from the just-released 15th Annual National Business Group on Health/Towers Watson Survey on Purchasing Value in Health Care1 provide a comparative context for the study results reported by Mr Cantillo. The 507 employers surveyed in the Business Group on Health/Towers Watson study reported healthcare cost increases of 7% in 2009 and an expected 6.5% in 2010. Comparing these percentages with those of the school districts, schools had slightly higher cost increases in 2009, but they share some of the same concerns with other employers regarding employees' poor health habits, employee resistance to change, and lack of employee engagement related to health.

School districts, like most companies, continue to invest in the health of their employees and are seeking to engage them in healthier behaviors through the use of various incentives, including financial. Schools, like municipalities and healthcare systems or hospitals, are encouraged today to look more closely at other purchasers of the healthcare benefits as a result of recessionary impacts on local fiscal budgets. As many employers had shifted health benefit costsharing to employees in the past, it is becoming increasingly more important to better engage employees and their families in healthier behaviors if cost trends are to be tamed in the future.

Health plan strategies by these large self-insured employers are beginning to drive changes by traditional health insurance plans that serve the majority of insured lives in the United States. As more objective information and insight become available about health cost trends, as well as premium increases in all sectors, employers and employees will have a greater opportunity to strive toward, then achieve, their shared goal of a healthier, happier work environment.