Increases in Drug Utilization and Patent Expirations: A Recipe for Growth of Generics' Market Share, despite Stalling on Biosimilars

As 2009 is coming to a close, the future of generics appears brighter than ever, with many brand-name medications pending patent expiration by 2011, accounting for about $34 billion in total sales in 2008.1 The drug patent expiration outlook overshadows the recent Senate vote to extend the patent exclusivity period for biologics to 12 years, as requested by the biotechnology industry, thereby significantly delaying the introduction of potential biosimilars to the market. A biosimilars pathway now seems likely to become a reality by 2010 or 2011.

Nevertheless, with drug costs doubling in the decade between 1996 and 2006, as was recently shown in a new report from the Agency for Healthcare Research and Quality (AHRQ),2 and the continuing trend of growing utilization of generics in the United States, the growth in first-time generics will likely continue to rise (even if at a lower rate than before), further increasing the competition with brand-name products and possibly contributing to their price inflation, especially after 2011.1

Similarly, Medco projects an increase in health plan drug utilization between 2009 and 2011 (from 0%-1% to 1%-2%, respectively) and in drug price (from 3%-4% to 4%-5%, respectively) per member per year,1 all pointing to the continuing trend of greater generics utilization in the coming years. 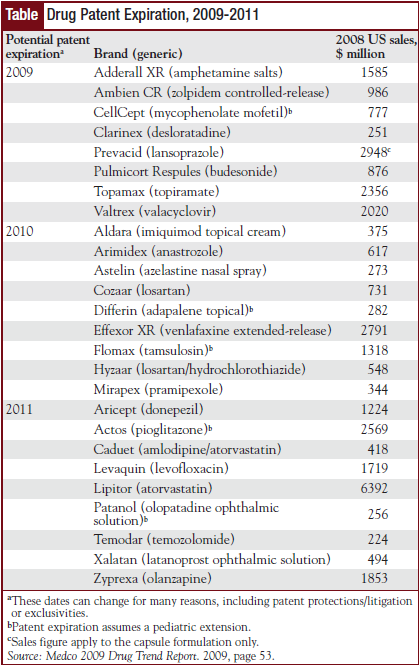 A select list of brand-name drugs expected to lose their patent by 2011, as well as their US retail sales in 2008, is listed in the Table. Many of these drugs will likely appear as generics by 2011. If by then a biosimilar pathway becomes available, as is widely anticipated in the industry, the total utilization rate of generics/biosimilars and their share of the total market are likely to increase even further.