The total number of generic prescriptions continues to grow at a rapid pace (Table), and the US Food and Drug Administration (FDA) is having difficulties keeping up with the rate of new applications.1 In July 2008, Medco reported a record genericdispensing rate of 63.7%, which reflects a 4.8% increase compared with the second quarter in 2007.2 Keeping with this trend, on July 29, 2008, the FDA approved a generic version of yet another antiepileptic drug (AED)—Depakote—making it the 10th FDAapproved generic AED on the market. 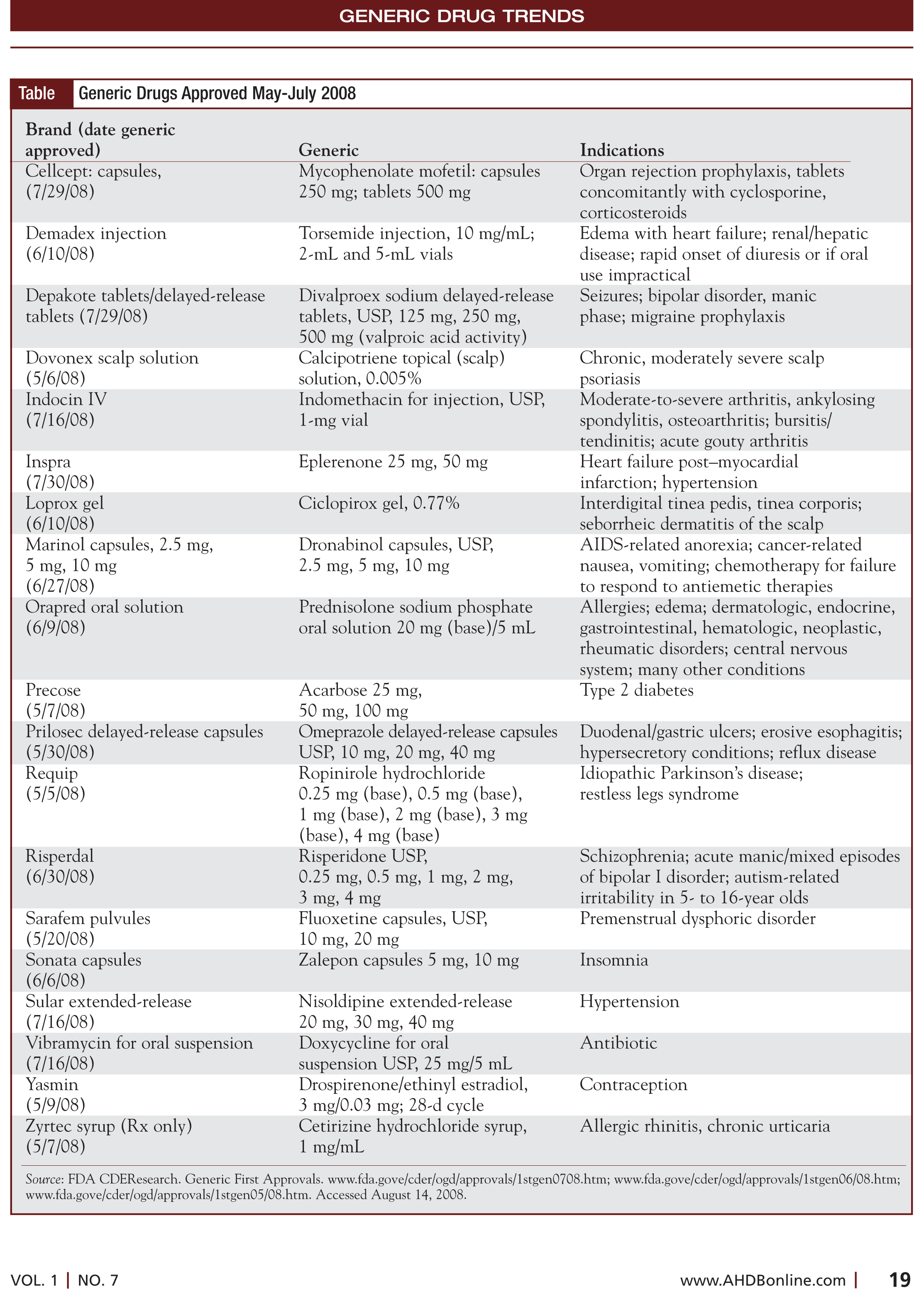 Despite this abundance of generic AEDs, increasing reports pose questions about the therapeutic equivalence of these generics, raising concerns among physicians and patients. A new survey of 550 adults with epilepsy and 660 physicians who treat such patients reported that 88% of the physicians were concerned with an increasing number of breakthrough seizures in switching patients to generic AEDs, and about 50% of them were very likely to request that a branded AED be used instead of a generic.3 In addition, a growing number of reports are relating adverse events associated with switching from brand-name to generic AEDs.

A recent Canadian study compared the rates of patients switching from a branded drug to a generic formulation and vice versa. The rates of patients switching back from generics to brand-name drugs because of adverse events were 7.7% to 9.1% for non-AEDs, compared with 20.8% to 44.1% for those taking AEDs.4 In a previous analysis of the economic impact of generic versus branded formulations of the AED lamotrigine involving 671 patients, the authors found that overall healthcare costs with generic substitution were greater than without generic AEDs, despite the lower cost of the generic products.5 Healthcare utilization was significantly greater in those using generic AEDs, with more outpatient visits and greater mean hospital stay. The authors conclude that substituting with a generic does not always reduce costs when it comes to AEDs.5

In yet another study just published in Neurology, which included 50 patients who were well controlled with different brand-name AEDs, breakthrough seizures occurred after switching to a generic AED (and without any other provoking factors).6

These and similar studies raise concerns about generic AEDs that have not been consistently documented in other therapeutic classes. Drs Shaw and Krauss, of Johns Hopkins School of Medicine, offer one explanation, noting that although generic AEDs "generally provide safe, effective, lower-cost alternatives to brand-name drugs," the bioequivalence for AEDs "has not been evaluated in patients with epilepsy or in other special populations such as elderly patients or patients taking multiple AEDs."7 Drs Shaw and Krauss suggest that most patients can initiate generic AED therapy and switch from brand to generic AEDs. However, the FDA "has not shown safety in generic-to-generic switches, which could potentially cause drug concentration changes of up to 40%."7 All of this suggests that the current "bioequivalence standards may not be sufficient for certain patient populations and for certain drugs,"7 they conclude.

So although many patients are enjoying therapeutic success at reduced costs by switching to different classes of generics, it is prudent to exercise extra caution when prescribing generic AEDs. Physicians, pharmacists, and policymakers should be aware of such reports and address these concerns.