In early September, the US Food and Drug Administration (FDA) sent out a press release posting the first quarterly report titled "Potential Signals of Serious Risks/New Safety Information Identified by the Adverse Event Reporting System (AERS)," listing the potential safety issues of drugs currently on the market. This action is in conformance with direction provided by Congress in accordance with Title IX, Section 921, of the Food and Drug Administration Amendments Act of 20071 (see Sidebar). It is long in direction and attempts to promote transparency in the pursuit of public health safety, but the impacts and effects are entirely unclear for drug manufacturers and prescribers, as are the benefits to patients.

Dr Janet Woodcock, Director of the FDA's Center for Drug Evaluation and Research, said, "My message to patients is this: Don't stop taking your medicine. If your doctor has prescribed a drug that appears on this list, you should continue taking it unless your doctor advises you differently."2

For drug companies, this presents one more milestone for which to plan in addition to those already in existence, such as:

In addition, the existence of periodic unexpected crises (such as the discovery that an investigator is not in fact a doctor or an investigation by an irascible member of Congress) is interwoven throughout all phases of drug production. With the publication of this new list, yet one more crisis has been added.

The ramifications of the publication of this list are unclear, but it does raise many questions. The FDA published the first report of 20 drugs on Friday, September 5,3 which put it into the news cycle on Saturday.4 The first list did earn prominence in the media, but what will be the impact when the list is posted regularly? Will the media publish it—either mainstream or trade publications? Will lawyers collect them for use as evidence in malpractice suits? Will disease-specific medical societies gather those that pertain to their membership and reprint them? Will the potential concerns affect the outlook of analysts? Will the reports have an impact on stocks (hence, the Friday afternoon posting)? It is too early to tell; however, the answer to at least some of these questions is quite probably affirmative.

How does a marketed drug end up on this new list? The FDA makes the process clear on its website, in the section that houses the report:

"FDA staff in the Center for Drug Evaluation and Research (CDER) and Center for Biologics Evaluation and Research (CBER) regularly examine the AERS database as part of routine safety monitoring. When a potential signal of a serious risk is identified from AERS data, it is entered as a safety issue into CDER's Document Archiving, Reporting, and Regulatory Tracking System (DARRTS) or into CBER's Therapeutics and Blood Safety Branch Safety Signal Tracking (SST) system. Potential signals of serious risks are normally based upon groups of AERS reports, although a single AERS report could lead to further evaluation of a potential safety issue."1 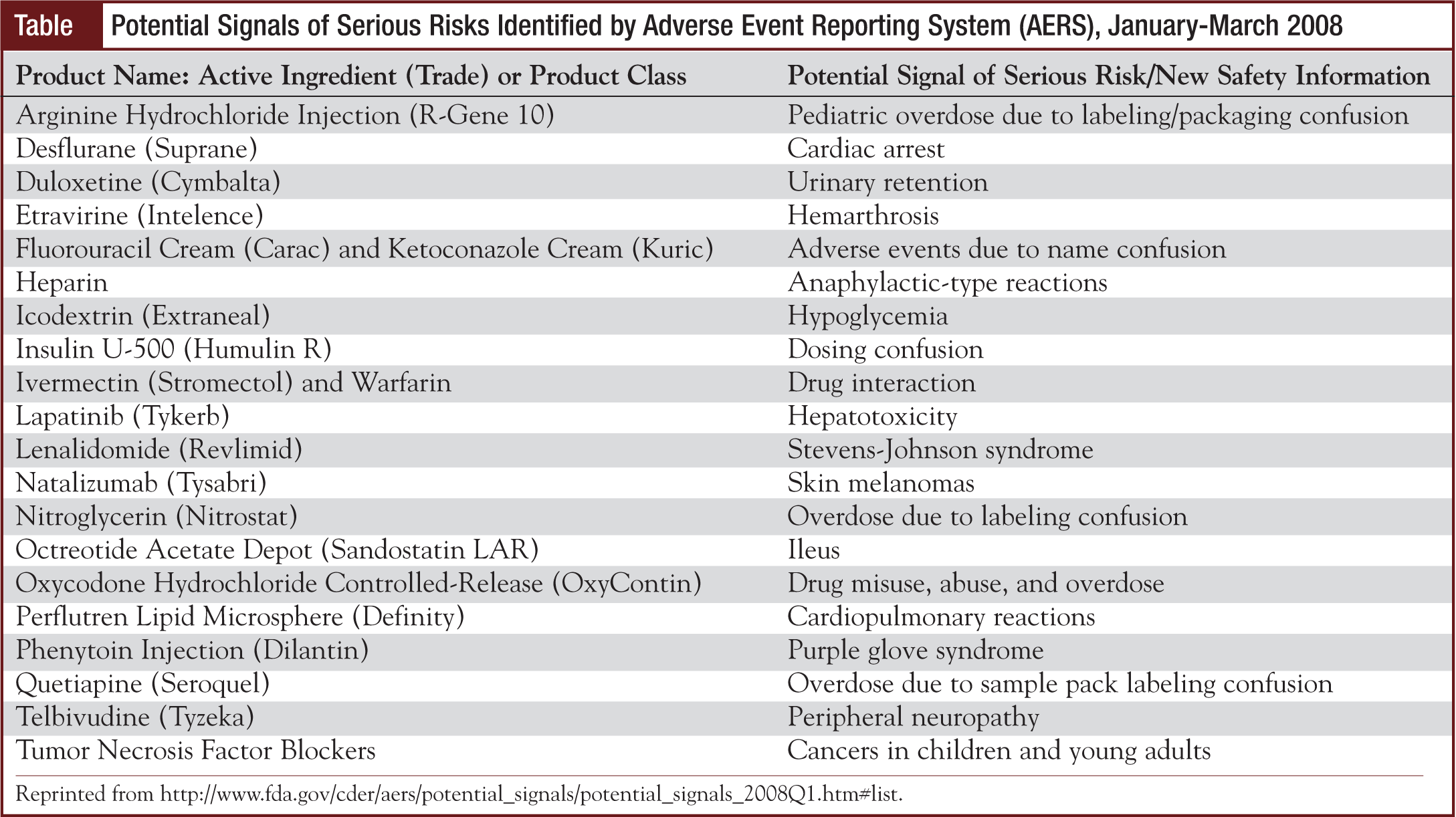 But in fact, the actual list provides very little informationor insight for patients, and does not direct patients to resources that could provide detailed information. The drugs are listed first by generic and then by brand name (Table). What follows is a very brief description of the potential signal, which may be a classic example of where a little information could potentially become a dangerous thing. How many instances were there, what other drugs were the people taking, what percentage have been affected, what does the drug treat? Answers to these questions may be found only with further research on the part of the patient and may even involve the filing of a Freedom of Information Act request.

There is no mention of any procedure to vindicate a drug once the safety issue is found to be unrelated to the compound. Maybe this is yet another manifestation of the current environment that emphasizes risk over benefit. There is no vindication, only condemnation.