Trends in Pharmaceutical Expenditures: The Impact on Drug Benefit Design

Annual national spending for pharmaceutical agents was increasing at a rapid pace during the late 1990s and early part of the 21st century, outpacing increases in spending on hospital care and on physician services, which had dominated the industry in the 1970s. In the past few years, however, this trend has shifted, resulting in a lower growth rate in 2005. The reasons for these trends of increases and subsequent declines are explained in this article, including the slower pace of increase in generics and the increasing role of biologic agents in the rate of pharmaceutical price inflation. The sharp increases in drug spending led to changes in prescription drug benefit designs that have not been fully tested. The recent decline creates an opportunity for health plans to evaluate the value of current and new strategies and implement value-based benefit designs in accordance with the shifting focus in healthcare toward value-based patient care. [AHDB, 2008;1(4):29-34.]

In the latter part of the 1990s, the annual increase rate in national spending for pharmaceutical medications ranged from 11% to 17%, overtaking the growth rates for hospital care (3%-6%) and physician services (4%-7%), which had dominated the healthcare industry in the 1970s.1 At the turn of the 21st century, this rate was expected to continue to climb but instead had reached a peak by 2001-2002. And by 2005, the increased spending rate fell to 6%—the lowest it had been since the 1970s.2 For the first 9 months of 2007, the increase rate was only 4.7%—slightly lower than the expected range between 5% and 7%.3

Current projections of increased prescription drug spending rate for 2008 are3:

The high rates of growth in the late 1990s are attributed to 3 main factors—(1) increased overall utilization, (2) increased prescription drug prices, and (3) increased use of new and expensive drugs. The first factor, increased overall utilization, reflects both an increase in the total US population and an increase in the per-capita number of prescriptions consumed on an annual basis. From 1993 to 2000, the US population increased from 256 million to 276 million.1 This population expansion has continued and, according to the most recent Census estimates, has just crossed the 300-million mark.6

During the same period, the average number of prescriptions per person also rose—from 7.3 to 10.4.1 This increase in utilization per capita is the result of several factors, including an average annual increase of 14% in promotional spending by pharmaceutical manufacturers between 1996 and 2000, as well as an increase in the proportion of all consumers who are older than age 65 years.1 The elderly are by far the largest consumers of prescription drugs, spending 2.7% of their income on prescriptions, compared to only 1% for the general population.1 This may also be partly explained by a lower overall income for the elderly. Nonetheless, for the period from 1993 to 2000, utilization changes accounted for about one half of the overall increase in pharmaceutical spending.1 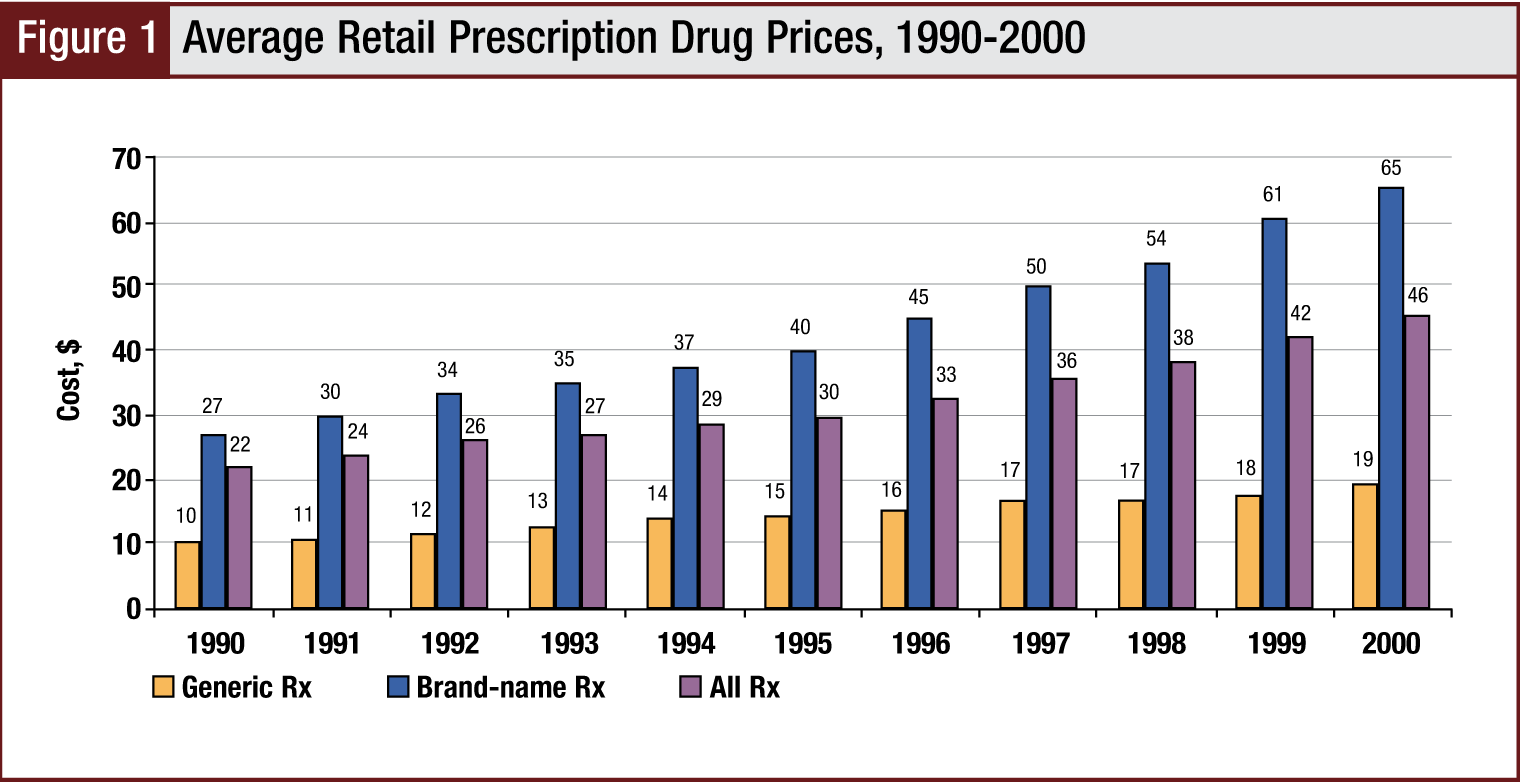 A second contributor to the high rates of increase in pharmaceutical spending has been the increase in prices for prescription drugs, which was clearly evident throughout the 1990s (Figure 1) and continued into the new century. In 1990, the average price for a prescription drug at a retail pharmacy was $22; by 2000 it had increased to $46.1 Hidden in this number is a striking increase in retail prices for brand-name drugs. The average retail price for generic drugs increased from $10 in 1990 to $19 in 1999, roughly a 90% increase, compared with the average increase in the retail price for brand-name drugs from $27 in 1990 to $65 in 1999—an increase of 140%.1

From 1994 to 2005, prices in creased by an average of 8.3% annually—more than triple the average annual inflation rate of 2.5% during that period.1 Over the past several years, the increased availability and use of biologic drugs has been one cause of pharmaceutical price inflation; biologics are used by only 0.2% of patients in the United States but account for 8% of total medical costs in an insured population.4 More recently, since the introduction of Medicare Part D, the cost of medications used by the Medicare population has increased faster than inflation and cost-of-living adjustment for social security—by 9.2%, which is nearly 4 times higher than the average inflation rate over past years.7

Between April 2006 and April 2007, the cost increases for some of the most frequently prescribed Part D drugs were1:

Although price increases within a 1-year time frame may only represent a snapshot in time, the more relevant issue is that price increases are rarely associated with the incremental benefit of the drug therapy from previous years, and disproportionate price increases to any specific population, such as the elderly, are rarely justified or accommodated through pharmacy benefit design. For the period between 1993 and 2000, price inflation for prescription drugs accounted for 19% to 24% of the overall in creases in expenditures for prescription drugs.8 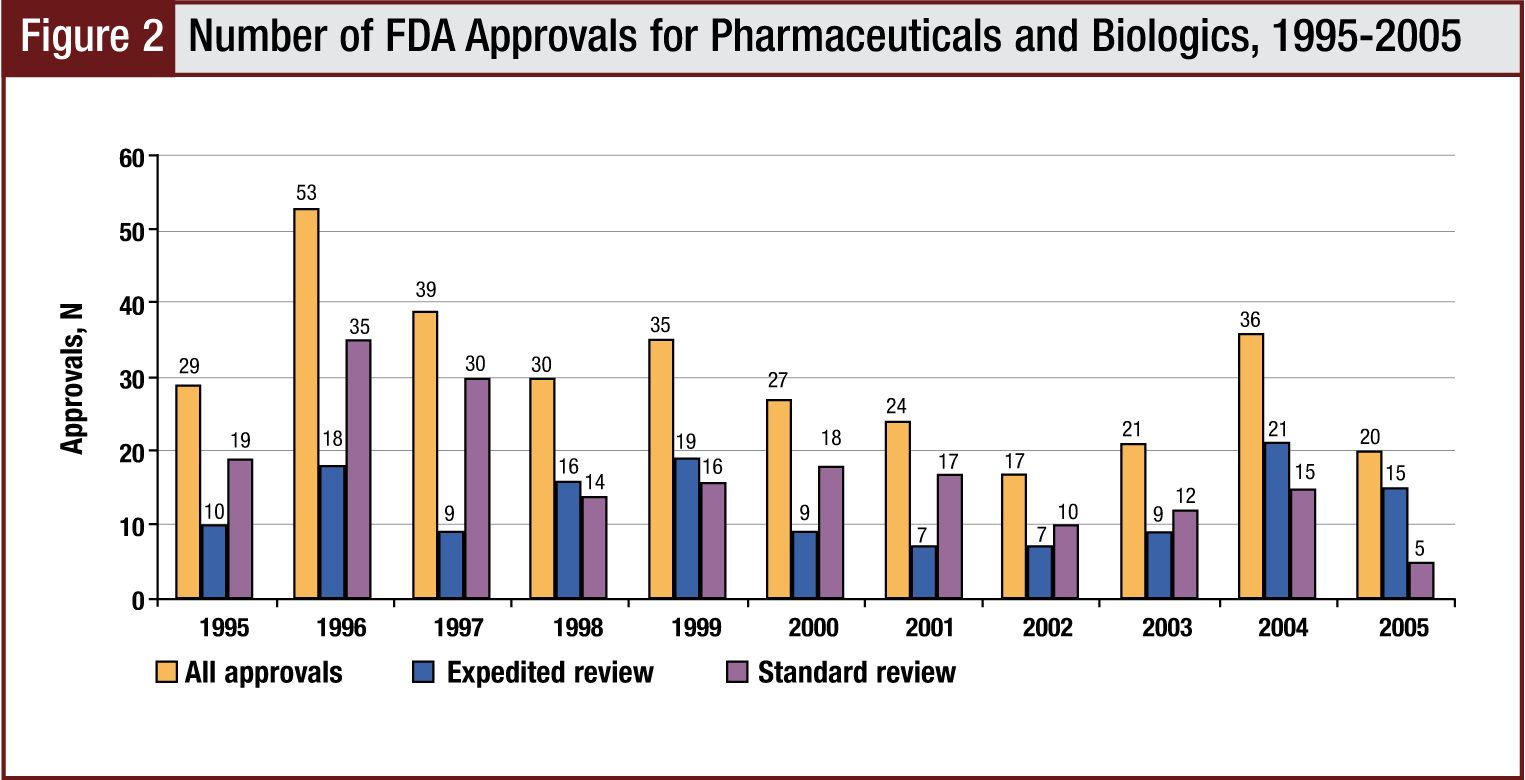 A third contributor to the high rates of increase in drug spending during that period was an increase in the use of newer and more expensive agents in general (Figure 2). The approval of new drugs and biologics by the US Food and Drug Administration (FDA) fluctuates from year to year, but in the late 1990s, when annual increases in expenditures were high, the number of drugs and biologics approved annually averaged 37.5 Between 2001 and 2005, when annual increases in spending began to decline, the number of new FDA approvals also fell to an annual average of 24.5

A number of variables can affect how new drugs increase overall spending. First, new drugs may be used in place of older, and less costly, drugs. For example, with the introduction of oral antidiabetic agents, the use of relatively inexpensive insulin in the mid-1990s was reduced.9 More recently, Brixner and colleagues showed that the market share of angiotensin receptor blockers continues to grow,10 despite the publication of the Antihypertensive and Lipid-Lowering Treatment to Prevent Heart Attack Trial (ALLHAT) in 2007,11 which indicated that older antihypertensive medications were the preferred first-line agents for the reduction of cardiovascular mortality in patients with hypertension.

Second, new drugs increase overall spending because new drugs are often used as add-on therapy rather than a replacement for existing treatments, as in the case of new treatments for Alzheimer's disease or diabetes. Finally, new drugs increase spending because they may treat a condition not previously treated with drug therapy, such as for the treatment of obesity, erectile dysfunction, or irritable bowel syndrome. Therefore, between 1993 and 2000, the increased use of new agents contributed to about one third of the overall increase in spending on prescription drugs.1

In a recent review, the Kaiser Family Foundation identified nearly 30 strategies used by health plans to decrease spending on pharmaceuticals, including efforts to directly limit the availability of drugs, to increase cost-sharing for patients, or to decrease prescribing of drugs through educational efforts targeted toward providers.12

Methods used to increase cost-sharing include copayments, particularly when associated with a tiered formulary. A formulary is a list of preferred drugs developed by healthcare systems to identify the most useful drugs.13 Tiered benefit designs are a mechanism used to allow open formularies, while simultaneously limiting the utilization of nonpreferred agents with increased cost-shifting to the patient.

The tiered benefit design has become prevalent in health plans. By 2004, 90% of covered workers had tiered benefit designs—65% with 3 tiers, 20% with 2 tiers, and 3% with 4 tiers.12 Studies of these benefit designs generally show a decrease in short-term spending on pharmaceuticals.14-18 However, the overall value of these designs in terms of their impact on patient outcomes and long-term costs has not yet been evaluated.12 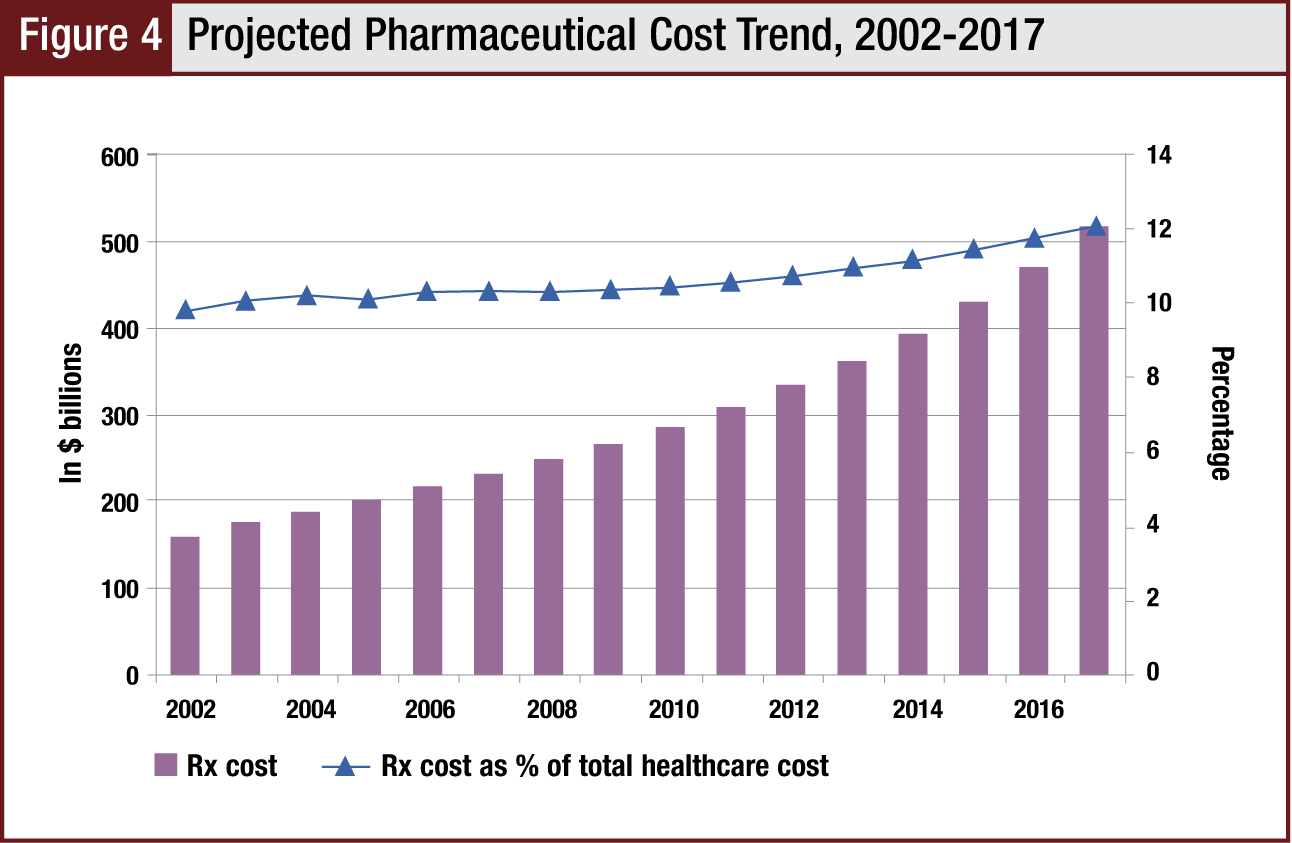 Projections for Drug Expenditures
Prescription drug spending is expected to continue to increase for the next 4 years, although at a lower rate than was seen a decade ago.19 Projections for prescription drug expenditures in the coming years are outlined in Figure 4. The increase is expected to accompany a decreasing proportion of overall healthcare spending in other healthcare markets.19 The reason for this is that pharmaceuticals tend to be a very cost-effective option compared with other types of healthcare spending. A heuristic frequently cited in the popular press states that every dollar spent on prescription drugs saves $3.50 in other healthcare expenditures.20

With decreased rates of inflation for prescription drugs, the resultant decreased pressure on health plans to contain costs should be viewed as an opportunity to evaluate the impact of cost-saving strategies on patient outcomes and long-term costs, which has not heretofore been done.

As healthcare costs continue to rise and pharmaceutical expenditures continue to show value in the treatment and prevention of disease, drug benefit design should be expected to transition from a cost-management approach to a value-based approach. Patients should be expected to pay more when preference drives their decision. However, when legitimate health concerns, such as lack of efficacy or adverse events, can be documented, that evidence should support access to alternative medication choice, without financial burden to the patient. If access to drugs is determined by the drugs' value to defined populations, then valuebased drug benefit design should lead to overall costefficiencies, by defining patient-target populations for drug access and not by defining this access by cost.

HEALTH PLANS: Commercially sponsored health plans remain focused on aggressive costmanagement strategies for healthcare services that make sense to all stakeholders. As a premise for facilitating change, the authors may be na√Øve about the window of opportunity to introduce new solutions for healthcare expenditures, including pharmaceuticals. Although there may some respite in cost escalation as a result of brand blockbusters going generic, overall costs have not truly flattened from a health plan sponsor's perspective.

Current drug trends remain a concern, and alternatives, such as value-based strategies, are increasing from an interest perspective but not from the perspective of adoption across the greater marketplace. Some of the many issues associated with the concept of value-based benefit design is a lack of consensus on what constitutes such value, as well as what works for both the employee and the employer; how to implement a value-based plan; and what program design is the best for optimal economic outcomes for any specific plan sponsor.

Employers and other plan sponsors are facing a recessionlike economy in the United States, along with a multivariate set of factors that affect healthcare costs, including the presidential election cycle. Furthermore, the impact of biologic drugs followed by nanotechnology will likely exert greater pressure on an existing pharmacy benefit system that does not appear to work for drug products, with cost of product expenditures 10- to 100-fold greater than the traditional oral or topical pharmaceuticals used in the market today.

BENEFIT MANAGERS: It is important for all stakeholders to address fundamental issues in the healthcare market. A review of value-based drug benefit design is reasonable and needs to be replicated beyond a few success stories. Furthermore, the basic premise of increased cost-efficiency through efforts such as value-based plans or patient-segment targeting needs to be better understood. For example, some believe that patient segmentation through medical/scientific means, such as personalized healthcare, could increase health spending and exacerbate drug trends for the short-term, which can threaten business survival. Another question is how can we achieve appropriate patient segmentation through existing benefit programs or designs to provide the needed cost-efficiencies in health plans that will include the value of pharmaceuticals?

Commenting or reporting on current trends and benefit design can be a challenge for academic researchers, as well as for healthcare benefit managers. Being aware of all the information and perspectives available about medical or pharmacy program benefit performance, however, can only help all decision makers in making better informed health benefit plan decisions.