Managed Care and Medicare Use of Generics: Seizing the Opportunity, Part 2

Last month I discussed the unprecedented share of generic drugs in the total prescriptions that were dispensed in the United States in the past year. In 2004 and 2005, managed care organizations began to recognize the potential value of the very robust pipeline of generic products that were to be launched over the next 5 years. They recognized the significant impact this could have on their pharmacy cost and, ultimately, on the premium structure of the benefit. Therefore, managed care organizations have embraced the concept of generic drugs openly. They have long recognized the value that these lower-cost versions of pharmaceuticals can bring to their members.

Strategic initiatives—such as waiving copayments, moving drugs with generic equivalents to higher formulary tiers, or in some cases off the formulary altogether—have since been implemented. Genericbefore-brand step-edits are commonplace in today's benefit plans and have successfully improved generic utilization in key therapeutic classes.1

The payoff for promoting increased utilization of generic drugs is rapid, according to health plan standards. The savings include a one-time savings in the year of the generic launch, followed by ongoing savings each year thereafter. Because of the significant upside potential, health plans and pharmacy benefit management (PBM) organizations often actively promote the use of generics by such things as:

These efforts, coupled with generic substitution legislation in many states, often result in rapid conversion of the branded product to the generic. It is now commonplace to see a generic achieve as much as 85% to 95% of the market share within 30 days of its launch.2 At some mail order fulfillment facilities, the generic market share can exceed 95% within the first month.2 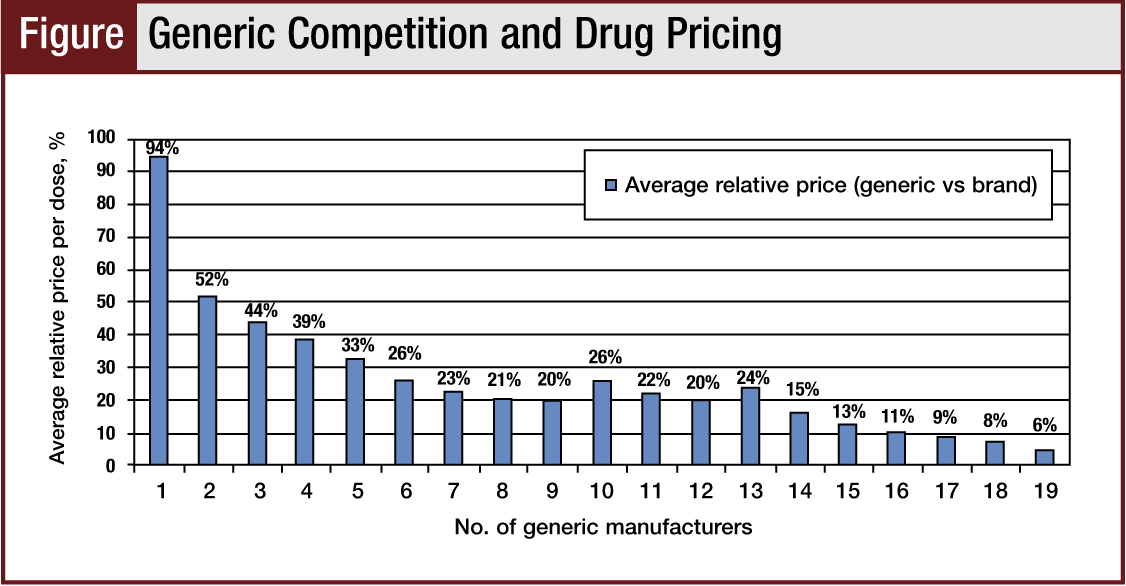 For health plans, employers, and PBMs, the economic power of generics is based on several factors. First, generics often cost 30% to 80% less than their branded counterparts. As seen in the Figure, this level of savings is directly related to market competitive forces, with the price dropping rapidly, as more manufacturers enter the market. Second, generic drugs are generally not subject to the same price inflation as branded products. In its 2007 Drug Trend Report, Medco reported that in 2006, the price inflation for generics was 0.2% compared with 6.9% for branded drugs.2

For Medicare members who are in Medicare Advantage plans or prescription drug plans (PDPs), the opportunities are also significant. Medicare members immediately benefit from generic drugs by the lower out-of-pocket cost, since these agents are typically on the lowest formulary copayment tier, or the copayment that is based on the percentage of drug cost is lower.

The second benefit to Medicare beneficiaries comes from the lower acquisition cost of a generic. Since generics cost less, the total spending on behalf of the beneficiary is lower and, therefore, reaching the spending level to put them in what is known as Medicare's "donut hole" takes longer.

The third benefit is in the period of coverage gap, when the member pays the cost of the drug. The lower cost of a generic, coupled with deeper discounts, result in lower spending by the beneficiary in the period of self-coverage. Many Medicare drug plans also offer enhanced coverage of generics through the socalled donut hole, thereby creating another benefit for the beneficiaries.

In testimony to the Senate Special Committee on Aging on September 21, 2006, then-Centers for Medicare & Medicaid Administrator, Mark B. McClellan, MD, PhD, testified that, "There are early indications that Medicare beneficiaries enrolled in Part D are relying on generics to a greater extent than the U.S. population as a whole. We would expect this utilization trend to continue, as more and more beneficiaries realize the significant savings available by switching to generic drugs."3 Dr McClellan added, "The Consumers Union found that beneficiaries with common chronic conditions who switch to generic or other therapeutically equivalent medications can save between $2300 and $5300 a year."3

Less than 25 years ago the use of generic drugs was relatively uncommon, with fewer than 20% of all prescriptions being filled with a generic product.4 Barriers to entry of the generic market were significantly altered in 1984, with the passage of the Hatch-Waxman Act (see AHDB, April 2008, pages 52-55). The past 10 years have seen significant realization of the benefits of this legislation, as billions of dollars in sales of branded drugs have been converted to generics. The public has benefited from more availability of these low-cost alternatives to branded drugs by seeing a significant decrease in the rate of pharmaceutical-spending increase. In addition, Medicare beneficiaries who are enrolled in Medicare Advantage plans or PDPs have taken full advantage of the savings that generics have to offer. One potential consequence of this, however, may have been the demise of the blockbuster small-molecule model in the pharmaceutical industry.

The consequences of this development are still unclear, but 2007 did witness the fewest US Food and Drug Administration approvals of new drugs since 1983. In contrast, consumers in both commercial and Medicare plans have seen significant savings accrue to them by switching to lower-cost generics. As noted last month, in 2007 generic drugs accounted for 63% of all prescriptions written in this country.4 But this represents only about 20% of the total pharmacy spending on drugs5; therefore, there are still many opportunities for savings using generic medications.

One large, untapped area of generic potential is the biologic and specialty pharmacy area. The debate over this issue will certainly intensify in the future. In the meantime, we can expect continued emphasis by health plans, PBMs, and benefit managers on the value of generic medications in the pharmacy benefit.

Disclosure Statement
Dr Owens is a consultant to Amgen, Genzyme, Novartis, and Wyeth, and received an honorarium from Encysive.