Looking Down the Pharmaceutical Pipeline

Based on a presentation titled "Scanning the Pharmaceutical Pipeline: What's on the Horizon?" by Brian W. Kolling, PharmD, at the Academy of Managed Care Pharmacy Annual Meeting, April 17, 2008, San Francisco, CA.

Approximately 1450 products are currently in the pharmaceutical pipeline, with treatments for cancer and central nervous system disorders dominating the research. Although the number of drugs being developed is at an all time high, the overall quality of the pipeline is unclear, considering the unpredictability of the US Food and Drug Administration (FDA), increased attention to benefit design, and the potential end of the traditional blockbuster drug model.

Only 4 of the 20 new drug applications were approved in 2007. Furthermore, patents on 7 major drugs—Lipitor, Plavix, Lexapro, Singular, Diovan, Actos, Zyprexa—will expire in 2011 and 2012, which will create a vertical effect in the market, because there are not 6 or 7 agents that can potentially replace them. Meanwhile, there are some important drugs to watch for during the balance of 2008.

A total of 6 new agents have either recently been approved or are awaiting approval this year that are expected to have significant impact.

Effient: A June priority review is scheduled for Effient (prasugrel; Daichii Sankyo/Eli Lilly), a platelet inhibitor for the prevention of cardiovascular events in patients with acute coronary syndrome, and if approved, this agent will be the only true competitor to clopidogrel (Plavix). In clinical trials, prasugrel prevented more events than clopidogrel but was associated with more bleeding events.

Dexlansoprazole: The proton pump inhibitor (PPI) dexlansoprazole (Takeda) would be a follow-on to lansoprazole for gastroesophageal reflux disease and erosive esophagitis. This could be the final PPI and may offer true 24-hour protection. However, the long-term prospects for this medication are unclear, and generic pressures in 2009 will require an aggressive launch and switch marketing campaign.

DPP-4: Several companies will be competing in the dipeptidyl peptidase-4 (DPP-4) inhibitor market given the failure of inhaled insulin (Exubera; Pfizer) and vidagliptan (Galvus; Novartis), decreased rosiglitazone (Avandia; GlaxoSmithKline) use, and an upcoming pioglitazone patent expiration. Alogliptin (Takeda) is scheduled to be reviewed in November and could be joined by saxagliptin (Bristol-Myers Squibb/AstraZeneca) next year.

Promacta/Nplate: Two new agents seek to expand available thrombocytopenia treatment. Promacta (eltrombopag; GlaxoSmithKline) is an oral platelet growth factor for chemotherapy and chronic liver disease–related thrombocytopenia and idiopathic thrombocytopenic purpura. If approved, it will be the first in its class. Nplate (romiplostin; Amgen) is a thrombopoesis-stimulating peptibody protein for idiopathic thrombocytopenic purpura treatment. Both Promacta and Nplate are expected to be reviewed this summer. Generic launches in 2008 will not be as extensive as those expected after 2010. Key generics expected to be approved in 2008 are listed in the Table. 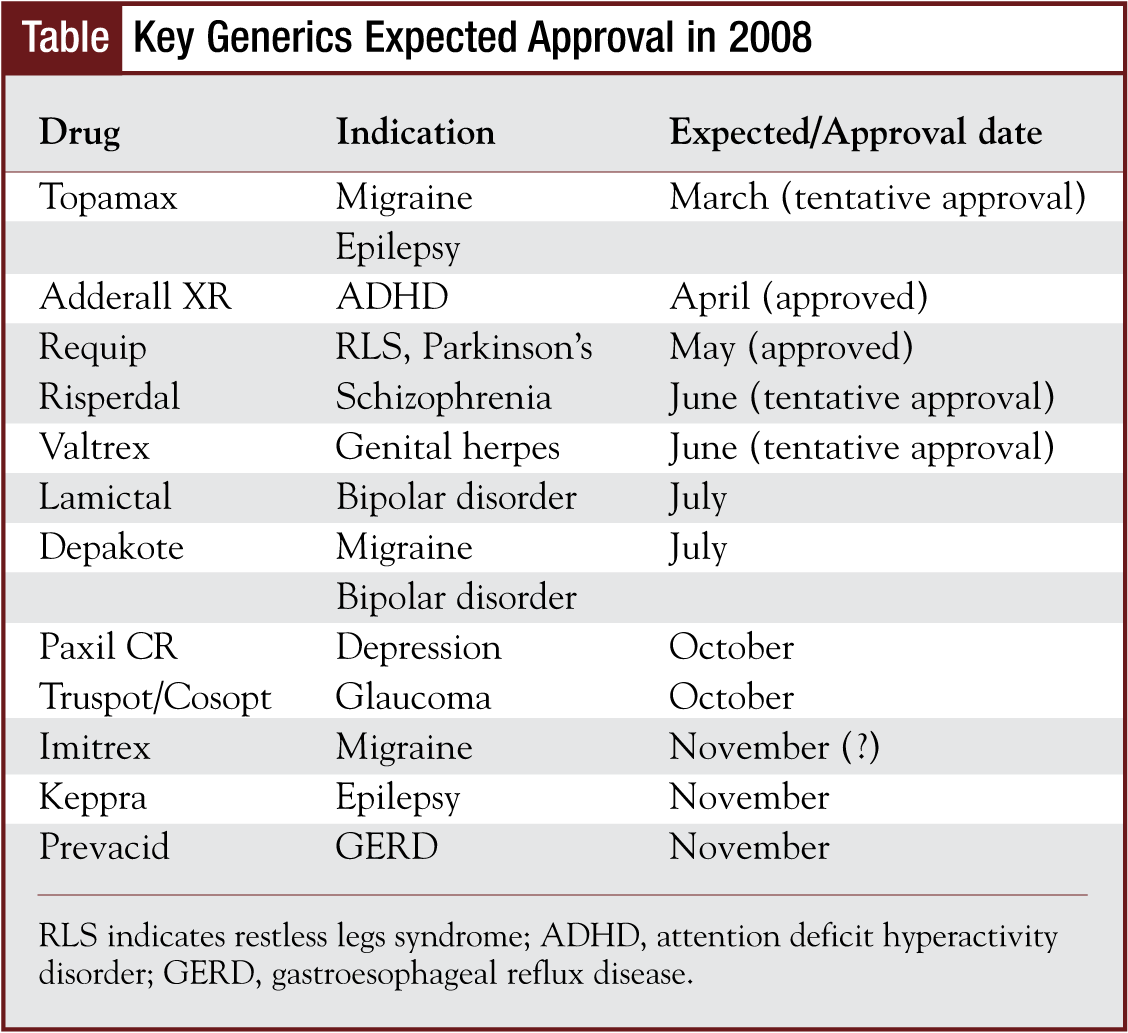 Venous thromboembolism. The pipeline has numerous products under development for venous thromboembolism that may replace older, inexpensive drugs. There is potential for combination therapy products and market growth as a result of the ease of administration, lack of monitoring needed, and fewer side effects that may be associated with drugs in the pipeline. In addition, pharmaceutical companies are licensing or sharing key products, including factor Xa inhibitors, which block the clotting factor required to produce thrombin. These agents include rivaroxaban (Johnson & Johnson/Bayer), apixaban (Bristol-Myers Squibb/Pfizer), LY517717 (Eli Lilly), and at least 5 others that are in early stages of development. In addition, the direct thrombin inhibitor dabigatran and the thrombin receptor antagonist SCH530348 are promising treatments.

Fibromyalgia. Pharmaceutical companies are increasingly recognizing the need to treat fibromyalgia, which is estimated to affect up to 4% of the US population and is one of the most common causes of chronic, widespread pain. Fibromyalgia is associated with significant comorbid insomnia and depression, and the only currently approved treatment for this is pregabalin (Lyrica). Two antidepressants are being reviewed for fibromyalgia treatment, including duloxetine (Eli Lilly) and a selective norepinephrine reuptake inhibitor, milnacipran (Forest), which is approved as an antidepressant in Europe.

Alzheimer's disease. A large amount of drug development activity surrounds Alzheimer's disease (AD) because the patient population is growing rapidly and current treatments have limited efficacy. Potential vaccines and disease-modifying agents are in the pipeline, with beta-amyloid targeted as a key peptide. Prophylactic treatments to prevent AD are also being researched.

The AD pipeline includes bapineuzumab (Wyeth/Elan), a beta-amyloid–specific monoclonal antibody that targets the N terminus of beta-amyloid. It is believed to prevent beta-amyloid aggregation and help clear plaques in the brain. A phase 3 trial in mild-tomoderate AD was started in 2007, and a drug launch is targeted for 2011. The current version of bapineuzumab is for intravenous (IV) infusion every 3 months, but a subcutaneous formula is under development.

Tarenflurbil (Myriad), the R-enantiomer of flurbiprofen, exhibits beta-amyloid effects without effects on cyclooxygenase 1 and 2. Phase 2 trial results in mild AD patients had disappointing results, but longer-term phase 3 trials are scheduled to start in June 2008, with a possible new drug application by the end of 2008 and a launch in 2010.

Gammagard is IV immune globulin (Baxter) that contains natural antibodies specific for beta-amyloid. Phase 3 trials are underway but are based on limited phase 2 data. Research with this AD treatment is interesting, but the therapy is likely to be cost-prohibitive.

The most interesting natural and long-term AD treatment under development is ELND-005 (Elan/Transition Therapeutics), which is derived from a naturally occurring form of sugar alcohol, scyllo-inositol. The substance is secreted by the brain, crosses the blood-brain barrier, and is orally active. The product is currently in phase 2 trials for mild-to-moderate AD and is fast-tracked by the FDA.

Hepatitis C. With an estimated 170 million people affected worldwide, there is a continued need for new hepatitis C virus (HCV) treatments. Current HCV treatments are associated with high rates of nonresponders and treatment discontinuations. The pipeline has generated renewed interest in HCV, led by protease inhibitors (PIs) representing a new mechanism of action. There are at least 13 PIs in development for HCV.

Telaprevir (Vertex) is a PI for HCV that is now beginning phase 3 trials, with an estimated 2010 approval date. According to phase 1 and 2 trial results, the product requires a shorter treatment course than currently available HCV treatments and may have response rates higher than those seen with current standard of care.