Where Generics and Biologics Meet

As was discussed in the first articles in this series (see AHDB, April, May 2008), generic medications are positively affecting trends in pharmacy spending and, ultimately, overall healthcare spending. Generic manufacturing and utilization have been increasing at a rapid pace.

Biologic medications have yet to be truly affected by the introduction of generic competition in the United States. Despite various blockbuster biologics going off patent and increasing pressure for cost-containment, no regulatory process or safety control has so far been established that will allow a generic biologic to reach the market.

We are all familiar with the word biopharmaceutical—a medication made by or derived from living organisms by the use of biotechnology. New terms flooding the market lately are follow-on biologic and biosimilar. These terms refer to agents that are similar but not identical to the originator biologic reference product.1 The US Food and Drug Administration (FDA) prefers the term follow-on biologic, but the rest of the world, and particularly European authorities, prefer the term biosimilar.2 Because these molecules are not identical to their reference products the way small-molecule generics are identical to theirs, it is vital that neither term be used interchangeably with generic or biogeneric.

To understand why follow-on biologics cannot be compared with traditional generics, we must examine the differences between these 2 types of pharmaceuticals (Table 1). For small-molecule generics, the development and manufacturing processes are straightforward. Generic manufacturers need only demonstrate that the product contains the identical chemical composition of the innovator product and a bioavailability study demonstrating similar pharmacokinetic properties.1 But as noted, follow-on biologics cannot meet even the most basic of these specifications—being identical to the innovator product—because of the very nature of biopharmaceuticals, and how complex the manufacturing process and end product are.

Most notably, biopharmaceuticals are large, complex proteins that are very closely tied to their manufacturing process. This process is composed of dozens of steps, including cloning sequences, expression in host-cell systems, fermentation, purification, and formulation. A change in any step can have drastic outcomes on the final product. The case of Eprex (epoetin alpha) is a good example. In the final product formulation, the manufacturing plant switched from human serum albumin stabilizer to polysorbate 80 and glycine, which resulted in an increased incidence of antibody-mediated pure red-cell aplasia.1 This serious side effect was unexpected, resulting from a seemingly innocuous change in the process. To complicate the issue further for follow-on biologics, the manufacturing process of the innovator product is protected by patent, thus making it nearly impossible to replicate any product.

The European Union has also developed a general legal pathway governing the approval of follow-on biologics. To date, 5 medications have been approved in Europe according to these guidelines.

As demonstrated by the Eprex example, biopharmaceuticals can provoke significant immunogenic responses. To account for this, the EMEA has specifically required 12-month immunogenicity comparisons and full pharmacovigilance plans for all follow-on biologics.3

Regulation in the United States While Europe has taken the lead in developing regulatory guidelines to bring follow-on biologics to market, the FDA has yet to approve and implement a process of its own. As noted in earlier articles in this series, the 1984 Hatch-Waxman Act amended the Federal Food, Drug, and Cosmetics Act to expedite getting generics to market.4 The 2 abbreviated pathways that the Hatch-Waxman Act added were 505(j) for traditional, identical generics and 505(b)(2) for drugs that are significantly different but comparable with an innovator product.5

In 1997, the Public Health Services (PHS) Act was enacted specifically to regulate biologic products. However, biologic products were first established nearly 15 years earlier, with the introduction of recombinant human insulin (by Genentech and Eli Lilly) in 1982.4 This has complicated the issue of launching follow-on biologics, because the early biologics and their follow-on imitators have been grandfathered in by Hatch-Waxman.

To date, a handful of follow-on biologics have been approved using the 505(b)(2) pathway—primarily versions of insulin and HGH.6 Although this has worked for older products, more recent biologics, regulated by the PHS Act, have been losing patent, and no process has been established for licensing and regulating any generic, or otherwise similar, product. 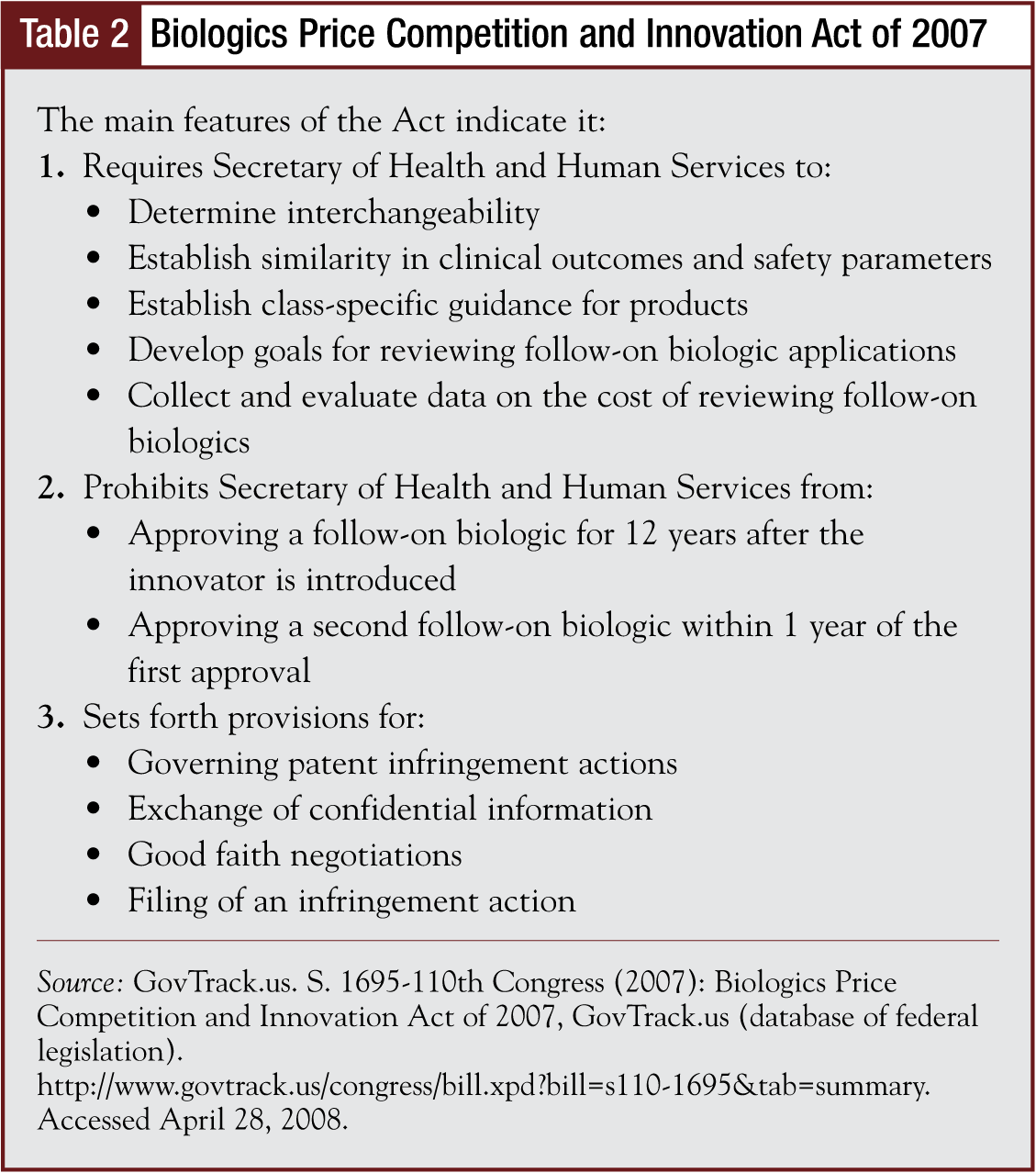 This apparent hole in the pharmaceutical regulatory system has sparked much debate and legislative proposals in the past few years. In 2007, 3 bills regarding follow-on biologics were introduced: the Access to Life Savings Medicine Act, the Patient Protection and Innovative Biologic Medicines Act, and the Biologics Price Competition and Innovation Act. The first 2 were quickly rejected. The latter, and most recently proposed bill, was introduced but has since stalled. It has proved to be the most promising legislation and includes several key features (Table 2). Most notably, it calls for demonstrating comparability, 12-year exclusivity for innovators, and 1-year exclusivity for the first follow-on biologic. This legislation is expected to be reconsidered after the 2008 presidential election.4

Likely US Targets for Follow-on Biologics

Biologics represent an exponentially growing share of prescription pharmaceutical spending. Sales in the United States have grown at least 17% annually for the past few years.4 Hundreds of biologics are in the pipeline, and by 2010 nearly half of drug approvals are expected to involve biotechnology.4 Several originator biologics are most likely to be targeted in the United States. In a study conducted by Citigroup Investment Research, 13 biologics were identified as the most likely to face follow-on competition by the year 2015 (Table 3).7 The selection was influenced by 3 key factors: market share, ease of manufacturing, and patent timing. Many of the identified targets are blockbuster medications. Epogen alone posted earnings of more than $2 billion in 2006. The researchers noted that monoclonal antibodies are generally deemed to present more challenges during the manufacturing process, so they are less likely to face competition.7 Patent timing will be a key factor for targeting agents in the United States. Some primary players in certain classes have lost or will shortly be losing patent, including granulocyte colony–stimulating factors, erythropoietins, interferons, and HGHs.1

Another challenge is how to pay for such a complex process. Cost estimates range from $10 million to $40 million for developing a follow-on biologic.8 Compare this with just $1 million to $2 million for a traditional, small-molecule generic. Estimates for the cost of constructing the manufacturing facility alone range from $250 million to $450 million—before a product is even made.8 In addition, biologic proteins can take a considerable amount of time to develop, with projections ranging from 5 to 8 years.8 These challenges have the potential to influence the projected cost savings associated with these products. 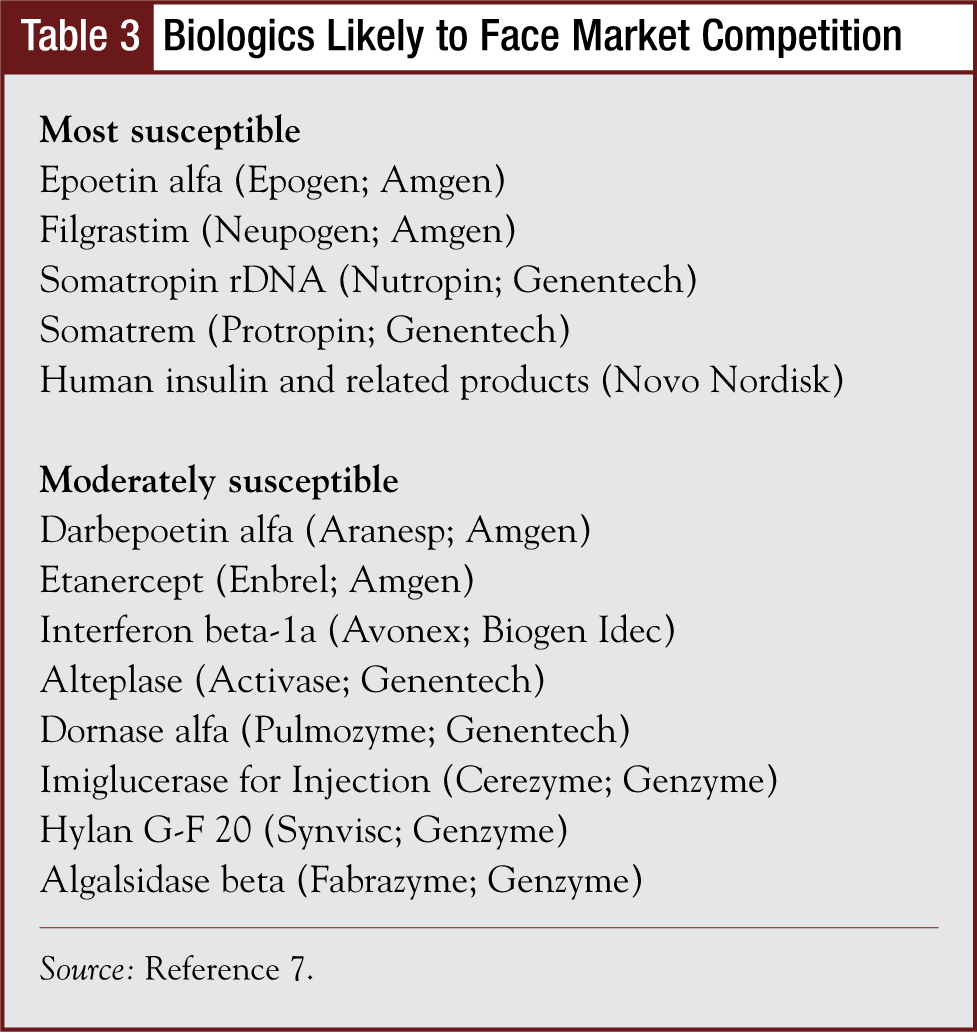 Cost Savings of Follow-on Biologic Despite these challenges, the financial incentive for many manufacturers is significant. In 2006, biologics accounted for roughly $54 billion, or about 20% of total pharmaceutical spending.5 And by 2010 they are expected to account for nearly double that, at $99 billion. This rate of increase is second only to diagnostic imaging in all healthcare spending.5 The reason for this is the increased cost of the product compared with traditional medications. On average, biologics cost $45/day or $16,425/year compared with $2/day or $730/year for traditional, small-molecule drugs.6 Such high costs could mean significant savings for consumers when follow-on biologics become available.

In 2007, Avalere Health calculated the potential federal cost savings from follow-on biologics at $3.6 billion in the first 10 years after the introduction of follow-on biologics.9 Other studies according to Avalere reported a 10-year saving for Medicare of $14 billion, and total savings in US spending of $71 billion.9 Many variables have to be considered in calculating potential cost savings from follow-on biologics. First, is the number of follow-on entrants a biologic can expect to draw. The Avalere study predicted that products with annual revenue of more than $1 billion could expect 3 follow-on biologics to compete for market share,9 a much smaller number than for small-molecule drugs, because of the high cost and time requirements in developing a biologic.

Second is the penetration rate for follow-on biologics. The Avalere study predicted a penetration rate ranging between 33% and 75%.9 The penetration for biologics will be less than for traditional agents because of the uncertainty surrounding their performance, safety, and immunogenicity. Finally, the Avalere study suggests the savings to consumers with follow-on biologics will likely be much lower than that from traditional generics, ranging from 10% to 30% compared with up to 90%, respectively.9

Although the cost savings are predicted to be substantial for the US economy, many pieces must fall into place before such benefits can be realized. The regulatory process for getting a follow-on biologic to market is unclear and is not likely to be determined before the end of 2008. If approved legislation is in keeping with the EMEA guidelines and proposed regulations, the approval process will not only be substantially longer but also more costly for manufacturers to conduct further clinical trials and surveillance. Also, increased upfront manufacturing costs will substantially reduce the number of manufacturers that could compete in this market. These initial costs will likely lead to smaller cost savings for consumers; however, given the high costs of biologics, savings should still be significant.

Obstacles to follow-on biologics include heavy opposition from innovators, absence of a follow-on biologic approval process, heavy costs and complexity in development, and new and uncharted territory, but despite these resistors, the future for follow-on biologics appears inevitable. With a large market share and rapidly growing market segment adding economic incentive for manufacturers, and patents using biologics running out, the future has already begun. Advances in analytic techniques and the unending pressure for cost-containment by third parties and the American economy add to the bright outlook. Followon biologics will likely forge ahead and become a reality in the near future.