The 2007 Pharmaceutical and Biotech Pipeline Year-End Summary: What it Says About the State of the Art of Discovery & Development

The BioPharm Insight 2007 pipeline data summary (see Tables) accentuates a theme that has been repetitively voiced within the research and clinical development community for a number of years: 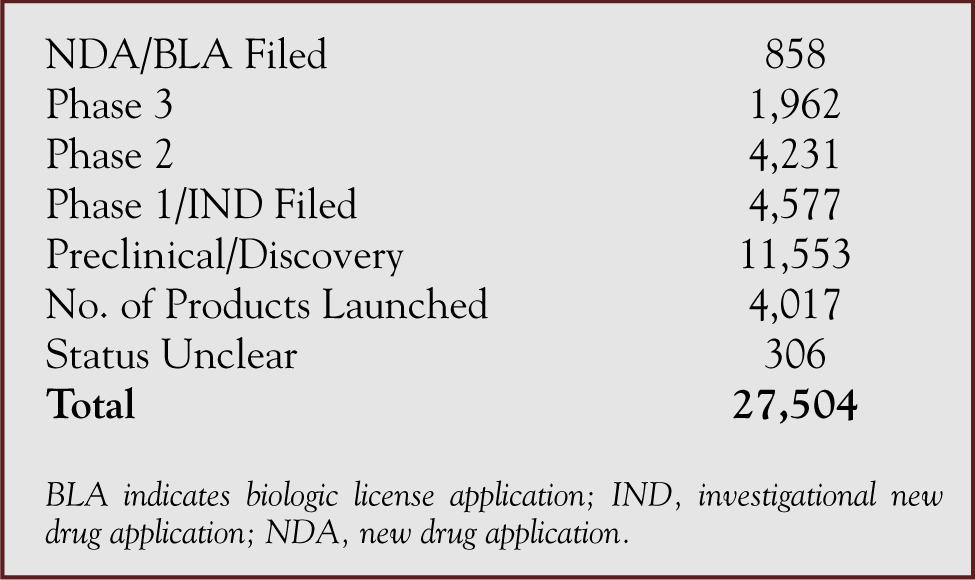 There is no economy of scale regarding innovation. Novel therapeutics may be derived from academic institutions, and small and medium-sized pharmaceutical companies, as often as from the larger research organizations. Given an increasingly prolific process, competitive drug discovery demands an ability to eliminate compounds as early in discovery as possible, in a fashion that does not stifle creativity. Across the industry, "potential hits" are triaged using virtual and actual biodisposition and toxicity paradigms with criteria consistent with potential as a drug candidate. Additionally, enhanced screening is introduced earlier in the discovery/development algorithm, ie, more upstream (closer) to the primary and secondary biological assays leading to candidate selection for clinical testing. In an entirely analogous fashion, integration of early phase clinical research into the drug discovery process requires an ability to efficiently evaluate different compounds simultaneously, rather than sequentially. The objective of this integrated stratagem is to maximize the value of the early phase portfolio considered in aggregate, rather than the value of individual projects contained within the portfolio, minimizing resource utilization and expenditures until program risk is significantly reduced.

A comparison of the attrition pattern for compounds from preclinical/discovery to registration programs (phase 3) is illustrative. Innovative science permits identification of an increasingly large array of novel new molecular entities. Given the uncertain homology that may exist in some therapeutic areas between animal models and biological effects in man even for basic attributes such as pharmacokinetics and safety, the need to render an early decision about a compound's potential utility in man, as opposed to extensive testing in animals, is increasingly recognized as key. Therefore, there is an impetus to begin limited human experimental evaluation as expeditiously as possible in phase 1 (including first in man studies) then phase 2 studies (dose ranging, proof of concept trials) placing considerable emphasis upon decision-making paradigms with an efficient allocation of resources. The more compounds within the discovery portfolio (see cancer for example), the more innovative the clinical and biostatistical methodology employed. This process is accelerating. 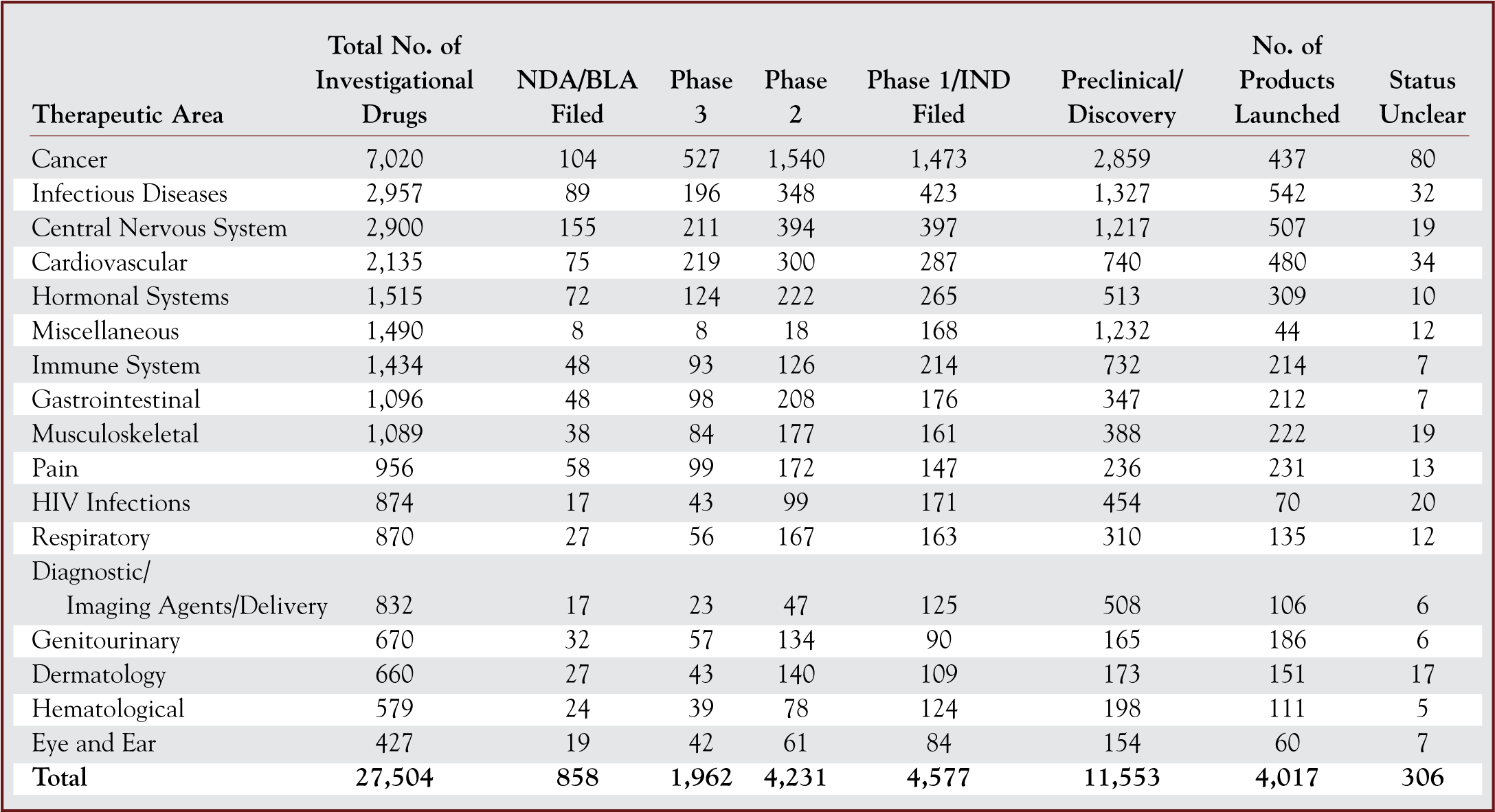 For example, no therapeutic area has contributed more to the development of clinical trial methodology, broadly defined, than has oncology. This phenomenon is in part due to an explosion in basic science that has facilitated the identification of very innovative therapeutics for which traditional trial methodology in a "proof of concept" study might be inappropriate. In oncology, and increasingly in other therapeutic areas, an ability to update and modify trial design as new clinical data are accrued, can allow a trialist to "prune" uninformative dosage groups from multi-arm dose-ranging trials prior to trial conclusion, terminate research on a clinical candidate as "futile" within constraints defined at study inception, and continuously update the information supporting the rationale for a study (ie, the hypothesis) as data accumulates. Utilization of biomarkers including imaging technology rather than clinical endpoints, and enrolling a highly "leveraged" patient sample (patients with characteristics likely to enhance signal detection based upon genotypic or phenotypic information) additionally maximizes sensitivity in a proof of concept motif. All of these complementary approaches provide a conduit for early phase translational research supporting an active drug discovery process.

Indeed, innovative trial design methodology is facilitated by the existence of relatively new regulatory guidance both in the United States and Europe that will permit compound evaluation in man, with certain restrictions, following submission of a comparatively limited portfolio of preclinical studies. Limited "exploratory IND investigations" in humans can be initiated with less, or different preclinical support than would be required for a traditional application as these studies present fewer potential risks to subjects or patients than traditional trials that specifically look for dose limiting toxicities. An exploratory IND program may permit an understanding of a compound's mechanism of action relevant to a particular disease state, characterize the pharmacokinetic or biodisposition profile of a candidate drug, or enable the selection of promising lead products from a group of candidates that interact with a therapeutic target in humans. Should a compound prove "interesting" in small elegant clinical trials, traditional safety and toxicological studies in animals that enable large-scale clinical trial testing are completed. This concept is closely related to a "fail fast" thematic that places considerable valence on the elimination of compounds early in development, prior to the allocation of the resources required to obtain regulatory approval. Parenthetically, this strategy is far more appropriately utilized in those pharmaceutical companies with a robust pipeline as opposed to organizations with limited resources and potential therapeutic agents.

The implications for the healthcare environment are considerable.

Data are provided by BioPharm Insight (www.biopharminsight.com); reproduced with permission from Infinata, Inc. All rights reserved.

The NCCN, an alliance of 21 of the nation's leading cancer centers, is an authoritative source of information to help patients and health professionals make informed decisions about cancer care. The NCCN's compendium recommends drugs and biologics for the major types of FDA-approved disease indications and specific NCCN panel recommendations.

The development of NCCN information is based on the independent evaluation of available scientific evidence integrated with the expert judgment of leading clinicians. Compendium recommendations are derived from the NCCN GuidelinesTM, a widely-used source of information recognized as the standard of care for oncology in the United States.

Bill McGivney, PhD, NCCN CEO, said: "We are pleased that United HealthCare is the first company to choose the NCCN's compendium as the basis for its guidelines in reimbursing for chemotherapy drugs administered in an outpatient setting. The compendium is developed based on the explicit evaluation of available scientific evidence integrated with the expert judgment of multidisciplinary panels of expert physicians from NCCN member institutions. The breadth and scope of this collaborative effort represents a significant advance beyond any previously developed guidelines. As a result, the NCCN guidelines have become the most widely used in oncology practice."

Previously, United HealthCare based its chemotherapy-drug policies on a range of medical literature resources, which, according to Lee Newcomer, MD, United HealthCare's senior vice president, oncology, has been standard in the industry.

The NCCN Drugs & Biologics Compendium guidelines recommend the most appropriate therapy based on clinical evidence and the consensus of leading academic cancer centers. They suggest the correct diagnostic evaluation, such as scans, x-rays and lab tests, optimal therapy—drug, x-ray or surgery—as well as appropriate follow-up tests.

"This new policy provides clinicians, patients and our customers with a respected, independent reference source for use in making chemotherapy coverage decisions," Dr. Newcomer added. "It is one of several programs launched after United HealthCare established a dedicated oncology team in 2005 to improve the quality of oncology care for our members. NCCN guidelines are a trusted source of treatment recommendations, and we value the fact that they are publicly available for both physicians and patients."
United HealthCare will update its chemotherapy-drug policies in conjunction with monthly updates made by the NCCN to its compendium. United HealthCare is currently communicating this change in drug policy regarding use of the compendium to its network of physicians. Complete information is available on the company's physician portal at www.unitedhealthcareonline.com

The Kaiser Health Security Watch reports that more Americans are personally worried about healthcare costs than about paying their rent or mortgage, being a victim of a terrorist attack or a violent crime, losing their job, or losing money in the stock market.

Healthcare worries rank ahead of other nonhealth concerns for the public, including not being able to pay their rent or mortgage (27%), losing a job (23% of those who are employed), being the victim of a terrorist attack (22%) or a violent crime (21%), or losing money in the stock market (21%).

This December 2007 tracking poll finds that Iraq continues to top the list of issues that the public wants to hear presidential candidates talk about, with more than a third (35%) naming the war as one of the top 2 issues in an open-ended question. Healthcare (30%) ranks second, followed by the economy (21%) and immigration (17%).

Healthcare ranks second behind Iraq for Repub licans, Democrats, and Independents alike; however, although health ranks clearly ahead of the economy and immigration for Democrats, it is more tightly packed with these issues for Republicans.

When asked about the issues that will affect their vote for president in 2008, the list of issues is similar to those the public wants to hear candidates discuss—Iraq (29%), followed by healthcare and the economy (tied at 21%), with immigration (12%) somewhat further behind. Iraq is the top voting issue for Republicans, Democrats, and Independents alike. 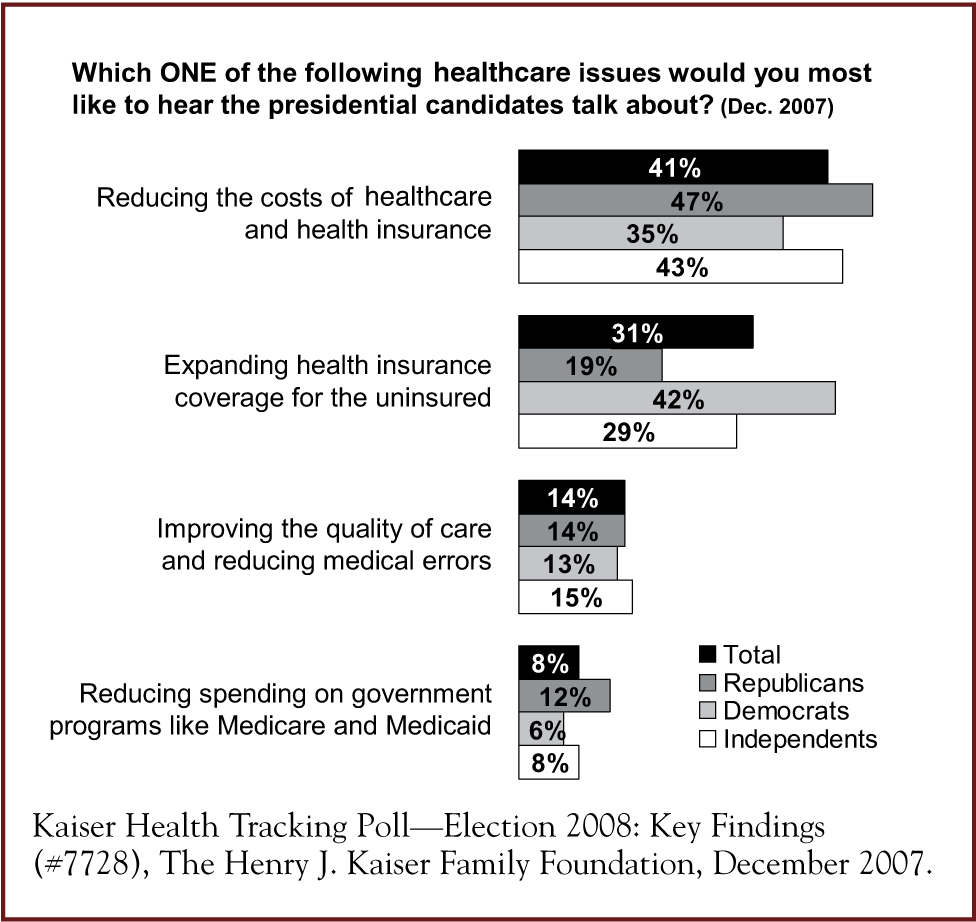 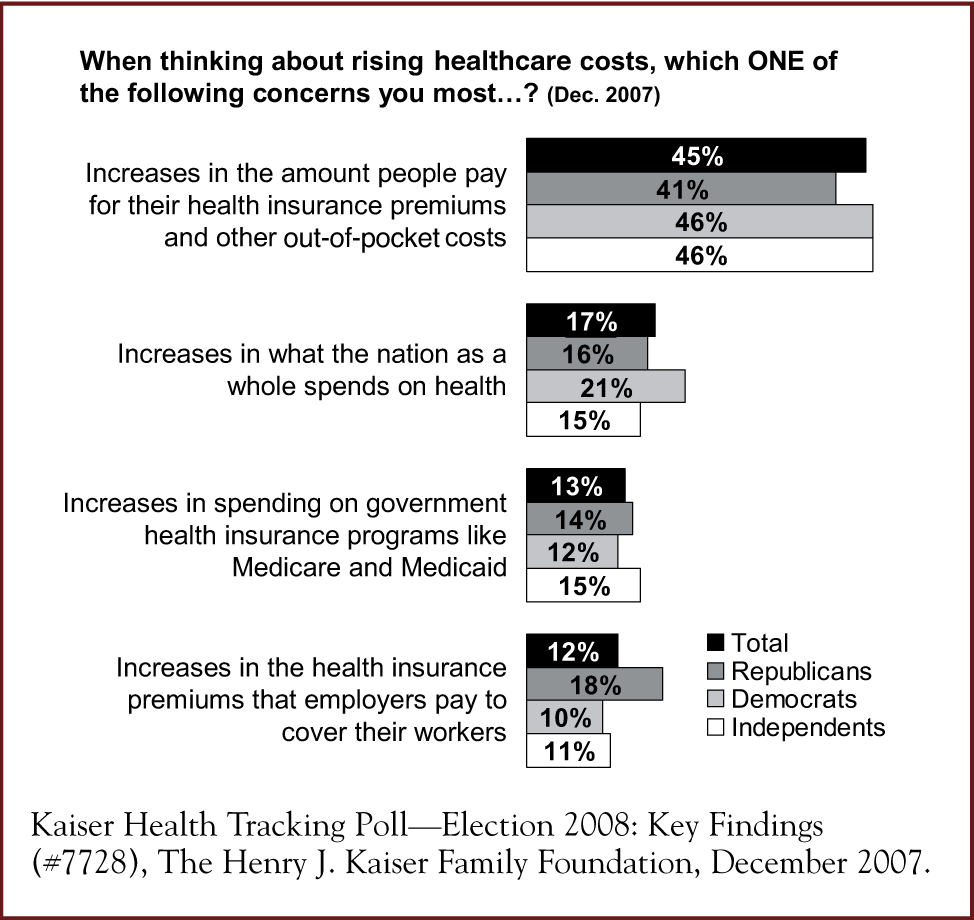 The poll also examines the specific aspects of healthcare that the public wants candidates to address, as well as their perceptions of the presidential candidates on health issues.

This latest Kaiser Health Tracking Poll: Election 2008, the fifth in a series, was designed and analyzed by public opinion researchers at the Kaiser Family Foundation. A nationally representative random sample of 1,221 adults was interviewed by telephone between November 28 and December 9, 2007. The margin of sampling error for the survey is plus or minus 3 percentage points; for results based on subgroups, the sampling error is higher.

We asked people what concerns them most when thinking about rising healthcare costs. For nearly half the public, their biggest healthcare cost–related concern has to do with increases in the amount people pay out of their own pockets for healthcare and insurance (45%, up from 38% in June, the last time the question was asked). This is true for Republicans, Democrats, and Independents alike. Behind out-of-pocket costs, smaller shares say they are most concerned about increases in what the nation as a whole spends on health (17%), increased spending on government health insurance programs (13%), and increases in insurance premiums paid by employers (12%).

This information was reprinted with permission from the Henry J. Kaiser Family Foundation. The Kaiser Family Foundation, based in Menlo Park, CA, is a nonprofit, private operating foundation focusing on the major healthcare issues facing the nation and is not associated with Kaiser Permanente or Kaiser Industries. http://www.kff.org/healthpollreport/CurrentEdition/security/upload/HSW1207.pdf.