In 2007, generic drugs accounted for an unprecedented 63% of all prescriptions dispensed in the United States.1 This level of generic prescribing is significantly changed from less than a decade ago, when the generic drugs accounted for less than 40% of all prescriptions.2 What has caused this shift in generic utilization, and what are the ongoing and future opportunities and issues of concern for the various stakeholders—health plans, pharmacy benefit plan managers, pharmaceutical manufacturers, and consumers? Will consumers continue to benefit from this trend going forward? Are there unforeseen consequences of this trend, and what might some of those consequences be? These are some of the issues explored in this article. In the first part of this series, the author traces the history of generic drugs in the United States from 1984 to 2006 and outlines the causes for the dramatic increase in generic drug prescriptions in the past few years. The next articles will continue this discussion, focusing on costs and current and future trends.

The History of Generic Drugs

To better understand the increase in growth spending on generic drugs, it is important to understand the history of generic drug use in the United States. In 1984, only about 18.6% of all prescriptions in the United States were filled with generic medications.1 Before 1984, generic drug makers were obligated to conduct the same safety and efficacy tests that had been required of the original manufacturer (of the brand-name drug) to receive US Food and Drug Administration (FDA) approval. This requirement created steep financial barriers to the development of generic drugs.

In 1984, the Hatch-Waxman Act, also known as the Drug Price Competition and Patent Restoration Act of 1984, was enacted, which significantly changed the landscape of generic drug prescription practices. This act attempted to balance the need for the developers of generic pharmaceuticals to compete with brand-name products with the need to protect legitimate intellectual property rights. The act contained 3 features that essentially changed the competitive landscape for generic products. The act:

Fast forward now more than 20 years, to 2006. In that year alone, pharmaceuticals that had $17 billion in sales lost patent protection, opening the way to the introduction of less expensive generic alternative medications. Specifically, in 2006 some of the drugs that lost patent protection were in major therapeutic categories. The branded drugs Flonase (fluticasone), Pravachol (pravastatin), Zocor (simvastatin), Zoloft (sertraline), Toprol-XL, 25 mg (metoprolol), and Ditropan XL (oxybutinin) were among the group of products that saw the emergence of generic equivalents in 2006. 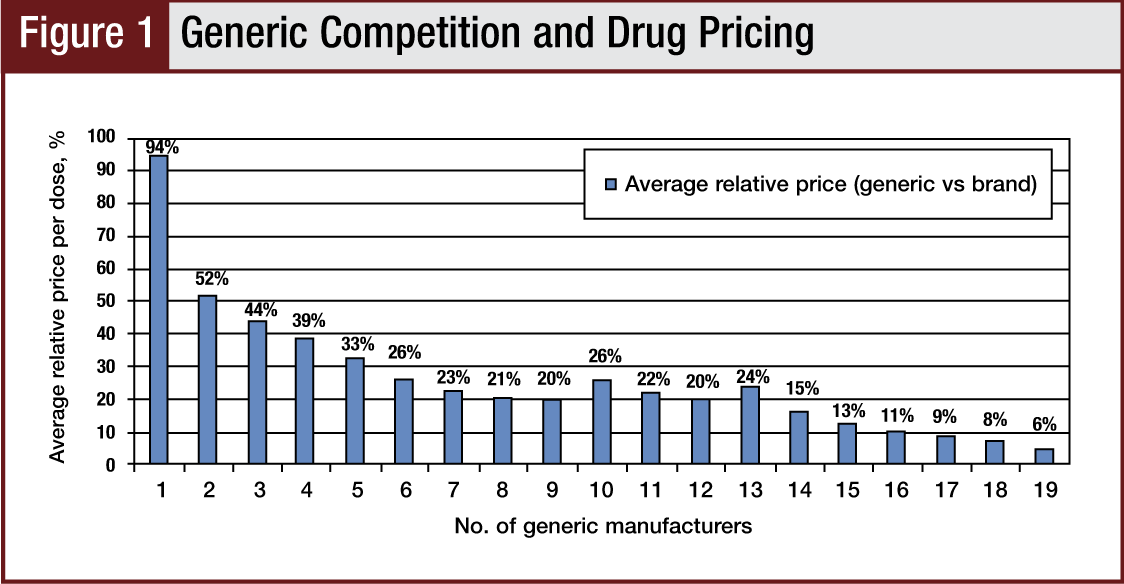 Initially, because of the period of exclusivity on some of these products, the overall price did not fall rapidly but the cumulative changes of these and other first-time generic introductions had a profound impact on the market. Generics generally cost 30% to 80% less than their branded equivalents. The level of market competition is often the determinant of the cost of a generic product. According to the FDA's Center for Drug Evaluation and Research, the cost of a generic drug is directly related to the number of unique generic manufacturers for the product.3 Figure 1 shows the relationship between generic drug competition and generic drug prices. The generic price per dose is expressed as a percentage of the brand drug price per dose (Y axis) and the number of generic manufacturers making the product (X axis).

Rising Cost of Healthcare and of Drugs

According to CMS, 2006 saw the US healthcare reach a new cost milestone of more than $2.0 trillion in direct health-related spending—virtually doubling in the past decade.4 That translates to an average spending of $7000 per person for every resident of the United States. This level of spending represents 16% of the gross domestic product, a larger portion of the economy than any other industrialized nation in the world spends on healthcare. With the launch of the prescription drug benefit in 2006, Medicare spending grew at its fastest pace since 1981. During the same period, private health insurance spending increased at its slowest rate since 1997, in part as a result of "deceleration in employer payments for private health insurance," according to Health & Human Services economist Aaron C. Catlin.5

In 2006, retail spending on prescription drugs rose by 8.7%, to $216.7 billion, in part driven by Medicare beneficiaries filling more prescriptions under the Part D benefit.5 Other factors that drove up drug spending were (1) the expanding use of existing drugs for new indications, and (2) the relatively rapid growth of high-cost biotechnology drugs. At the same time, Medco, one of the nation's largest pharmacy benefit management (PBM) companies, reported that the average cost of drug benefits to their clients increased by only 2.8%, continuing a pattern of moderating growth that has characterized the past few years.6 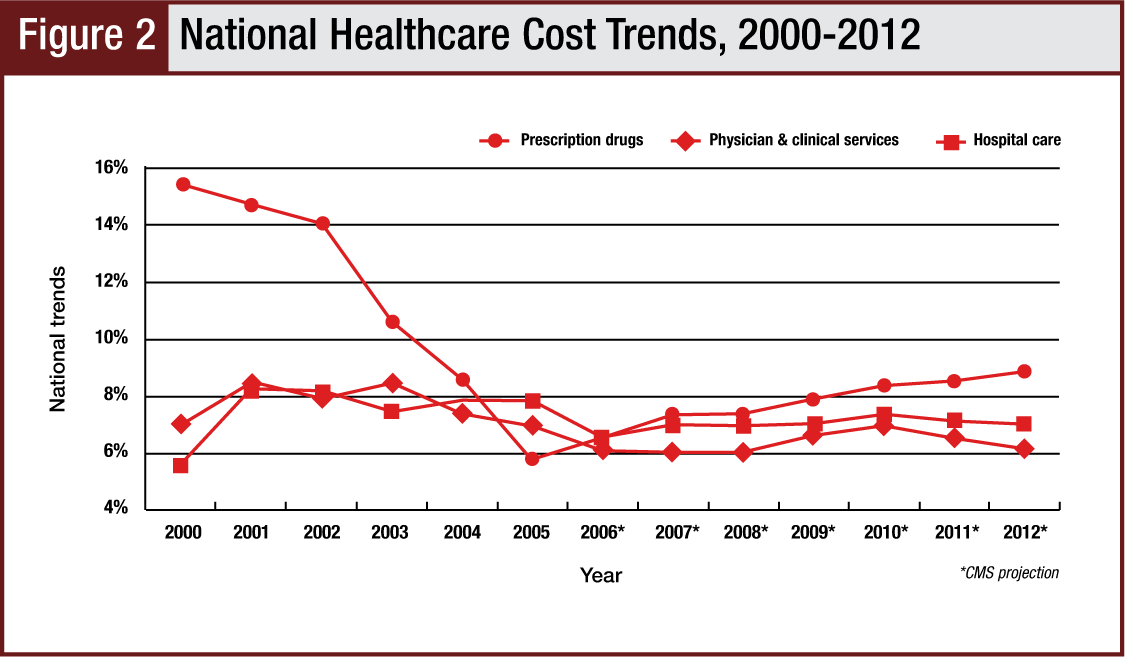 In the new decade, before 2004, double-digit rates of pharmacy inflation were present. Figure 2 shows actual cost trends for prescription drugs, physician services, and hospital care from 2000 to 2005, with CMS projections for spending from 2006 to 2012. Note that in 2000, prescription drug annual trend was nearly 16%; however, by 2005 the actual rate of growth had moderated to less than 6% annually, and although the 2006 CMS projection of a 6.5% growth rate was surpassed, the increase in prescription drug spending was below double digits.

For 2007 and beyond, CMS projects drug spending trends to remain under 9%. Latest data actually show that for 2007, the prescription drug rate of spending grew only 3.8%—the slowest rate of growth since 1961—and significantly less than the CMS projection of 7.8%.3

A number of factors have affected this decreasing rate of growth in prescription drug spending, including increased management activities by health plans and PBMs and increased patient cost-sharing for prescriptions, but no factor has had more impact in the past 3 years than the dramatic change in the utilization of generic drugs. As noted earlier, 63% of all prescriptions filled in the United States in 2007 were for generic drugs. Between 2007 and 2010, another 110 brand-name drugs will lose patent protection, representing another $50 billion in sales.8 In 2007 alone, the antihypertensive drug Norvasc (amlodipine) saw $4.9 billion in sales eroded by the introduction of a generic. The total of $67 billion in branded-drug sales potentially converting to a generic market between 2006 and 2010 can be hailed as a health policy success for the Hatch-Waxman Act.

There may be several unintended consequences of the Hatch-Waxman legislation. First, the development of new small-molecule products appears to have dramatically slowed in recent years. In part, this may be caused by the potential of decreasing profitability of branded drugs and the erosion of the blockbuster model. According to Diana Conmy, director of IMS Markets Division, "The blockbuster model is slowing."3 In fact, in 2007 only 19 new products were approved by the FDA, the smallest number of approvals since 1983. Moreover, of drugs that have been recently approved, many are considered to be of little additional therapeutic value. According to Helene Sherman, PharmD, chief pharmacy officer at Regence, "There are fewer and fewer products adding value, and there are a number of drivers toward that."9

Among the drivers of fewer products are such things as:

By creating different formulations of an existing product, often with a different delivery system, a longer-running patent can be created with lower developmental cost as compared with the development of a completely new molecular entity. Examples of this strategy include long-acting reformulations of an existing drug and reformulations into nonpill forms. The strategy here is to induce some users and the doctors who prescribe their medications to switch to the version that has the longerrunning patent before the generic version of the original compound is introduced into the market.

Another strategy is for the branded manufacturer to enter into a contractual arrangement with the generic manufacturer to delay the launch of the generic version. As one may expect, these contracts have been fiercely contested by managed care organizations, consumer groups, and the Federal Trade Commission as anticompetitive. However, a recent appeals court did rule that such agreements are legal, so this practice is likely to continue in the future.

It is evident that both branded and generic manufacturers have attempted to manage the provisions of the Hatch-Waxman Act to maximize their profits under the construct of the regulations. Some of the consequences, including drug reformulations to extend patent life, authorized generics, and contractual delays of drug launches, need to be balanced with the overall societal benefit of greater availability of generic drugs now.

Disclosure Statement
Dr Owens is a consultant to Amgen, Genzyme, Novartis, and Wyeth and receives honorarium from Encysive.