Iron-deficiency anemia is the most common form of anemia.1 Iron plays a key role in producing hemoglobin (Hb) in red blood cells, which enables red blood cells to carry oxygen effectively to the body’s tissues.1,2 Anemia resulting from iron deficiency can cause tiredness, weakness, and shortness of breath.2 If left untreated, iron-deficiency anemia can become severe and can lead to heart problems, including a rapid or irregular heartbeat, which can subsequently lead to an enlarged heart or heart failure.2

Iron-deficiency anemia is most common in women with heavy menstrual cycles; women who are pregnant, breastfeeding, or those who recently gave birth; people who have undergone surgery or physical trauma; people with peptic ulcers or gastrointestinal diseases, including celiac disease, ulcerative colitis, or Crohn’s disease; and vegetarians and other individuals whose diets exclude iron-rich foods.3 Patients who are receiving blood thinners and those who have kidney failure, particularly those on dialysis, have an increased risk of iron-deficiency anemia.4

Even if the cause of iron deficiency can be identified and treated, it is generally necessary to treat the patient with medicinal iron until the deficiency is corrected and the body’s iron levels are restored.3 Therapies include oral iron therapy and intravenous (IV) iron therapy. IV iron therapy may be required to treat iron-deficiency anemia in patients who have severe iron deficiency or chronic blood loss, those who cannot tolerate oral iron, those who do not absorb iron well, patients who have kidney failure (particularly those on dialysis), or those who are receiving supplemental erythropoietin.3,4

In the United States, more than 26 million people have chronic kidney disease (CKD).5 Anemia is common in patients with CKD, and iron deficiency is the most common cause of anemia in these patients.6 In patients with CKD, anemia is associated with increased morbidity and mortality,7 diminished health-related quality of life, and considerable healthcare costs8 (Table 1). 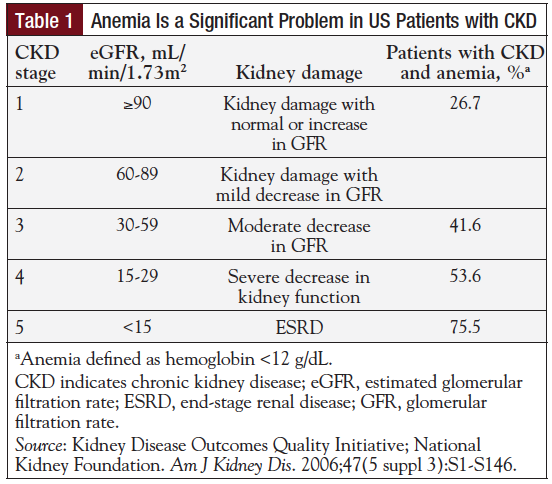 IV iron is available in a number of preparations, including iron dextran (high-molecular-weight and low-molecular-weight formulations), iron sucrose, ferric gluconate, ferumoxytol, and ferric carboxymaltose.9,10 IV iron therapy has been shown to raise Hb levels and replenish iron stores.11 As an adjunct to erythropoiesis-stimulating agent (ESA) therapy, IV iron therapy has become the cornerstone for optimizing Hb status and reducing ESA dosing needs.9 In fact, IV iron supplementation has been shown to reduce ESA use by 19% to 70%.12

An economic analysis of Medicare beneficiaries with stage 3 or 4 CKD and anemia showed that the patients who were not treated with IV iron or with ESAs had significantly higher rates of hospitalization, skilled nursing facility admissions, and mortality than patients who received treatment with IV iron or an ESA.8 Moreover, the total healthcare costs were higher for the patients who did not receive IV iron or ESAs.8 In the year subsequent to the index quarter, patients with CKD and anemia who did not receive IV iron or an ESA in the index quarter incurred significantly higher all-cause healthcare costs.

Injectafer a New, Nondextran IV Iron Therapy
In July 2013, Injectafer (ferric carboxymaltose injection; American Regent, Inc, a division of Luitpold Pharmaceuticals) was approved by the US Food and Drug Administration (FDA) for the treatment of iron-deficiency anemia in adult patients with an unsatisfactory response to oral iron or who are intolerant of oral iron and in adult patients who have non–dialysis-dependent CKD.10,13

Injectafer is the first nondextran IV iron therapy to receive FDA approval for the treatment of iron-deficiency anemia in a diverse group of patients with this condition, regardless of the underlying cause.14

Mechanism of Action
Ferric carboxymaltose is a colloidal iron (III) hydroxide in complex with carboxymaltose, a carbohydrate polymer that releases iron.13

Treatment with ferric carboxymaltose may be repeated if iron-deficiency anemia recurs.13

Clinical Studies
The safety and efficacy of ferric carboxymaltose injection were evaluated in 1775 patients with iron-deficiency anemia in 2 randomized, open-label, controlled clinical trials (trial 1 and trial 2). In both studies, ferric carboxymaltose was administered at a dose of 15 mg per kilogram of body weight, up to a maximum single dose of 750 mg of iron on 2 occasions, separated by at least 7 days, up to a cumulative dose of 1500 mg of iron.13

In this study, the mean age of the patients was 43 years (range, 18-94 years). The primary etiologies of iron-deficiency anemia were heavy uterine bleeding (47%) and gastrointestinal disorders (17%).

The baseline and the change in Hb from baseline to the highest value between baseline and day 56 or the time of intervention are shown in Table 3. At day 56, patients treated with ferric carboxymaltose showed increases from baseline in mean ferritin (734.7 ± 337.8 ng/mL), and transferrin saturation (30% ± 17%).13 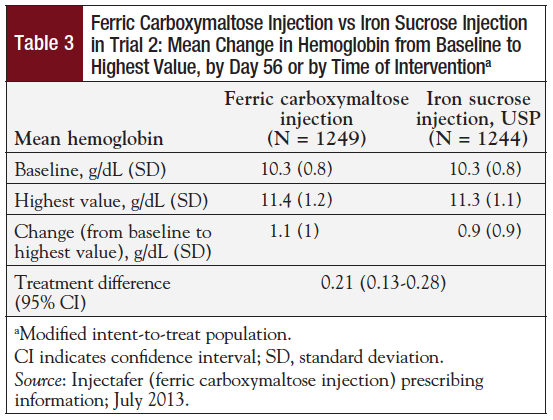 Adverse Reactions
In the 2 randomized clinical studies, a total of 1775 patients were exposed to ferric carboxymaltose injection, at a dose of 15 mg/kg of body weight, and up to a maximum single dose of 750 mg of iron on 2 occasions, separated by at least 7 days, for a cumulative dose of 1500 mg of iron.

The adverse reactions reported by ≥1% of patients are shown in Table 4. 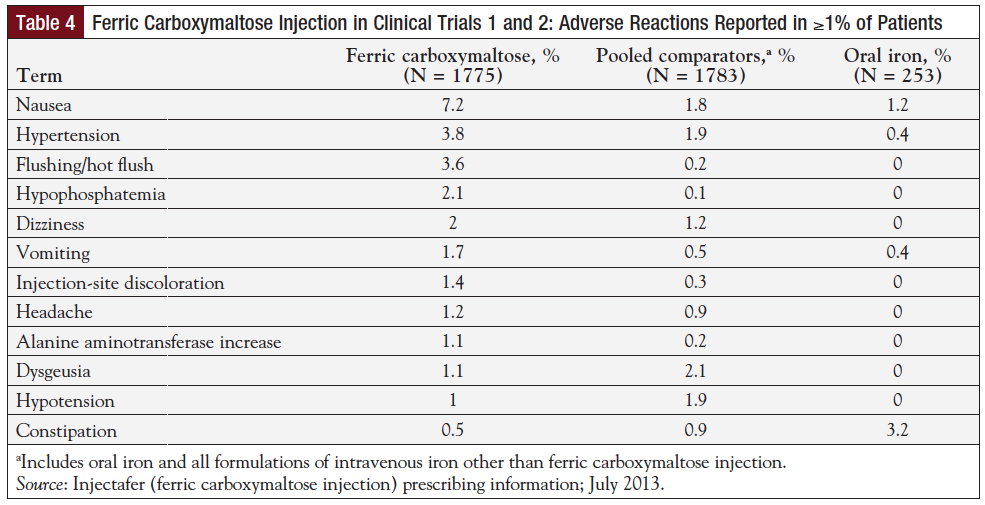 The most common adverse reactions (≥2%) associated with ferric carboxymaltose are nausea, hypertension, flushing, hypophosphatemia, and dizziness.13

Warning and Precautions
Formal drug interaction studies have not been performed with ferric carboxymaltose.13

Hypertension. Hypertension was reported in 3.8% of patients in 2 clinical trials. Transient elevations in systolic blood pressure, sometimes occurring with facial flushing, dizziness, or nausea, were observed in 6% of patients in these 2 studies. These elevations generally occurred immediately after dosing and resolved within 30 minutes. Patients should be monitored for signs and symptoms of hypertension after each ferric carboxymaltose injection.13

Nursing mothers. Caution should be used when administering ferric carboxymaltose to a nursing woman.13

Pregnancy. Adequate and well-controlled studies in pregnant women have not been conducted. Ferric carboxymaltose should be used during pregnancy only if its potential benefit justifies the potential risk to the fetus.

Pediatric use. The safety and effectiveness of ferric carboxymaltose have not been established in pediatric patients.13

Conclusion
The FDA approval of Injectafer, a non–dextran-containing iron therapy, provides a new IV treatment option for patients with iron-deficiency anemia who cannot use oral iron, those who have an unsatisfactory response to it, or those who have non–dialysis-dependent CKD.