Major depressive disorder (MDD) is a common, chronic medical illness that affects 5% to 8% of adults in the United States annually, which amounts to approximately 25 million people.1 Although MDD is treatable in most people, only 50% of patients with MDD ever receive treatment.1,2

Overall, MDD occurs 70% more frequently in women than in men.1 In people with chronic diseases (eg, heart disease, diabetes, or cancer), the prevalence of MDD ranges from 10% to 65%.4 MDD can also negatively affect the course of these chronic illnesses.4 Moreover, it is estimated that as many as 30% of drug and alcohol users may have undetected MDD.4

Without appropriate treatment, the severity and frequency of MDD symptoms generally increase over time.1 In fact, without treatment, an MDD episode can last from several months to years.2 Untreated MDD also increases the risk of suicide—the eleventh leading cause of death in the United States.4 More than 15% of Americans with depression take their own lives.4

The average annual cost of MDD in the United States is an estimated $83.0 billion, which includes $26.1 billion in direct medical costs, $5.4 billion in suicide-related mortality costs, and $51.5 billion in workplace-related costs.5 MDD is associated with more employee sick days and more rates of short-term disability than other chronic diseases.4

For most adult patients with MDD, a combination of medication and psychotherapy is the most effective management approach. Early detection, diagnosis, and treatment are crucial to improving outcomes for people with MDD.2

A New Treatment Option for MDD
In September 2013, the US Food and Drug Administration (FDA) approved Brintellix (vortioxetine) for the treatment of adult patients with MDD.6 Vortioxetine is an immediate-release tablet for oral administration that contains the beta-polymorph of vortioxetine hydrobromide, an antidepressant. This novel agent is thought to act multimodally via several mechanisms of action, including the serotonin (5-hydroxytryptamine [5-HT]) reuptake inhibition, as well as via 5-HT3 receptor antagonism and 5-HT1A receptor agonism.7

According to Mitchell Mathis, MD, Acting Director of the Division of Psychiatry Products in the FDA’s Center for Drug Evaluation and Research, “Major depressive disorder can be disabling and can keep a person from functioning normally.” Commenting on the FDA approval of vortioxetine, Dr Mathis added, “Since medications affect everyone differently, it is important to have a variety of treatment options available for patients who suffer from depression.”6

Dosing
Vortioxetine is available as 5-mg, 10-mg, 15-mg, and 20-mg immediate-release tablets. The recommended starting dose of vortioxetine is 10 mg administered orally once daily without regard to meals. The dose should then be increased to 20 mg daily, as tolerated. A 5-mg daily dose should be considered for patients who do not tolerate higher doses.

Vortioxetine can be discontinued abruptly; however, it is recommended that doses of 15 mg daily or 20 mg daily be reduced to 10 mg daily for 1 week before full discontinuation, if possible.

For patients known to be poor metabolizers of the cytochrome (CY) P2D6 enzyme, the maximum recommended dose of vortioxetine is 10 mg daily.

Mechanism of Action
Although the mechanism of action of vortioxetine is not fully understood, it is thought to be related to its enhancement of serotonergic activity in the central nervous system through the inhibition of the reuptake of 5-HT. Vortioxetine has several other activities, including 5-HT3 receptor antagonism and 5-HT1A receptor agonism. The contribution of these activities to vortioxetine’s antidepressant effect has not been established.7

Clinical Studies of Vortioxetine
The efficacy of vortioxetine was established in 6 randomized, double-blind, placebo-controlled, 6- to 8-week fixed-dose clinical trials, including a study in the elderly and a maintenance study in adult inpatients and outpatients who met the Diagnostic and Statistical Manual of Mental Disorders, Fourth Edition, Text Revision (DSM-IV-TR) criteria for MDD.7 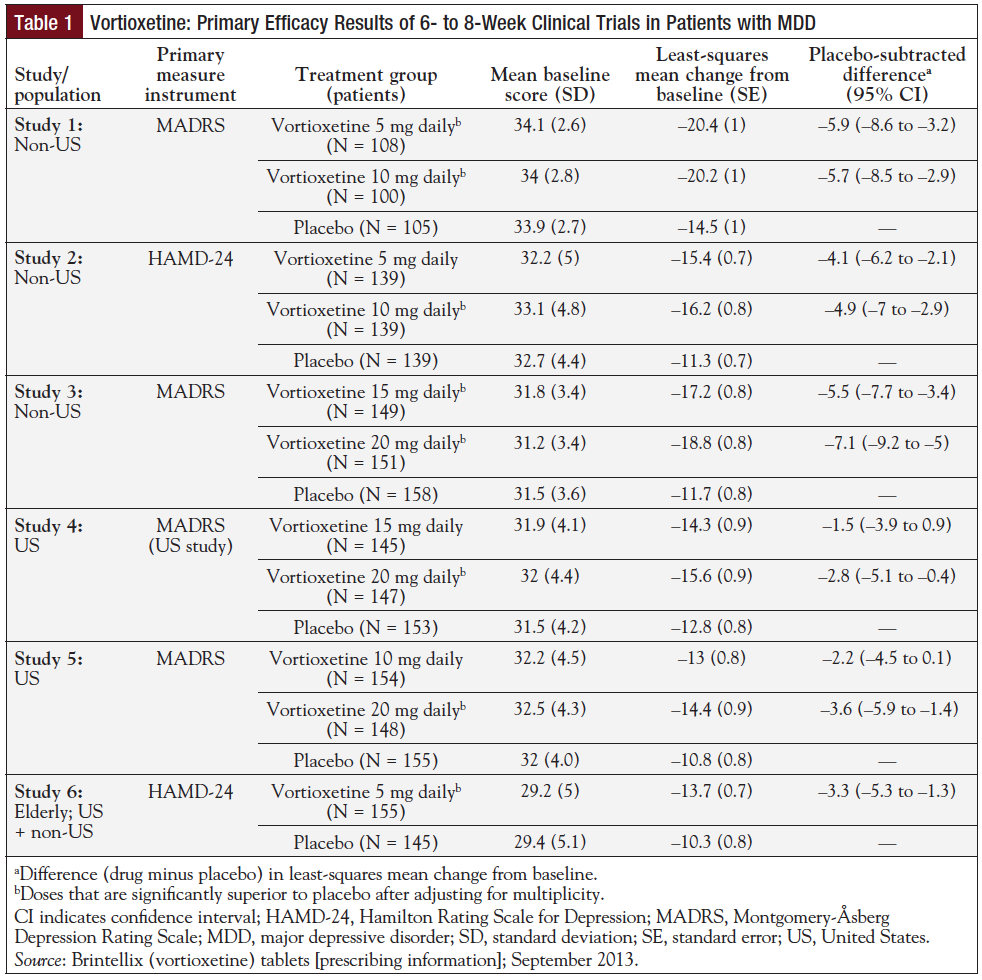 In each of these studies, at least 1 dose cohort of vortioxetine was superior to placebo in the improvement of depressive symptoms as measured by mean change from baseline to end point visit on the primary efficacy measurement. Moreover, a subgroup analysis by age, sex, or race did not suggest any clear evidence of differential responsiveness. However, 2 studies conducted in the United States with the 5-mg dose (not shown in Table 1) failed to show effectiveness.7

Study 6: Elderly Study
The efficacy of vortioxetine for the treatment of patients with MDD was also demonstrated in a randomized, double-blind, placebo-controlled, fixed-dose trial of older patients with MDD aged 64 to 88 years. The patients who met the criteria for recurrent MDD, and with at least 1 previous major depressive episode before the age of 60 years and without comorbid cognitive impairment (based on a Mini-Mental State Examination score of <24), received vortioxetine 5 mg or placebo. The results of study 6 are shown in Table 1.7

Maintenance Study
In a non-US maintenance study, 639 patients who met the DSM-IV-TR criteria for MDD received flexible doses of vortioxetine (5 mg or 10 mg) once daily during an initial 12-week, open-label treatment phase. During weeks 8 to 12, the dose of vortioxetine was fixed. In addition, 396 patients, who were in remission after the open-label treatment, were randomly assigned to continuation of a fixed dose of vortioxetine at the final dose they had responded to (approximately 75% of the patients were receiving 10 mg daily) during the open-label phase or to placebo for 24 to 64 weeks.

Approximately 61% of randomized patients satisfied the remission criterion (MADRS total score ≤10) for at least 4 weeks (since week 8), and 15% satisfied the remission criterion for at least 8 weeks (since week 4). Patients receiving vortioxetine experienced a significantly longer time to recurrence of depressive episodes than patients receiving placebo. The recurrence of depressive episode was defined as a MADRS total score of ≥22 or a lack of efficacy as judged by the investigator.7 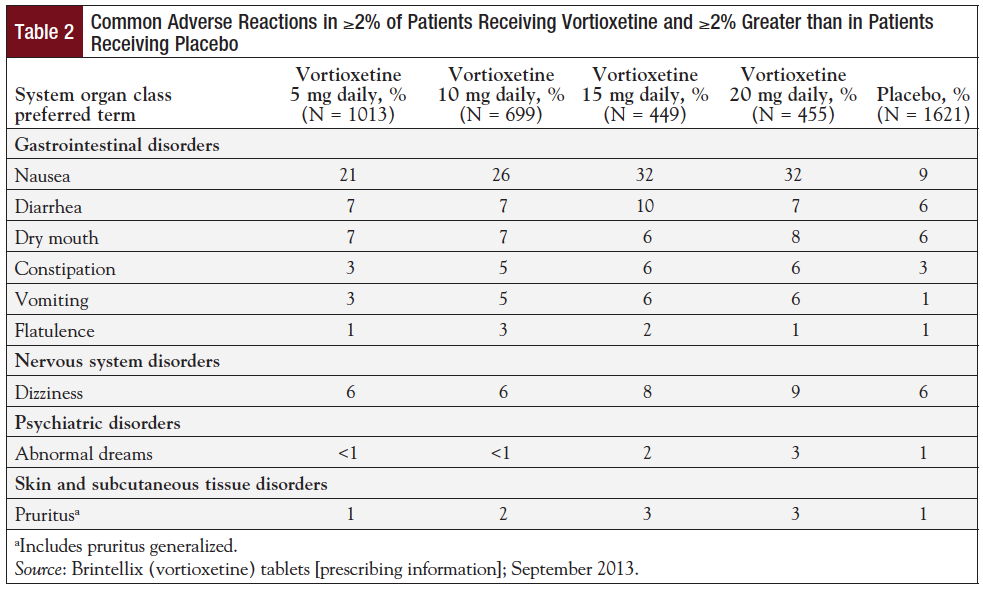 Contraindication. Vortioxetine is contraindicated in patients who are hypersensitive to vortioxetine or any components of the formulation.

Discontinuation. At least 14 days should elapse between the discontinuation of an MAOI intended to treat psychiatric disorders and the initiation of therapy with vortioxetine to avoid the risk of serotonin syndrome. Conversely, at least 21 days should be allowed after stopping vortioxetine before starting an MAOI intended to treat psychiatric disorders. Vortioxetine treatment should not be initiated in patients who are being treated with linezo­lid or intravenous methylene blue.7

Serotonin syndrome. Serotonin syndrome has been reported with serotonergic antidepressants (eg, SSRIs, SNRIs), including with vortioxetine, when taken alone, and especially when coadministered with other serotonergic agents (including triptans, tricyclic antidepressants, fentanyl, lithium, tramadol, tryptophan, buspirone, and St John’s wort). If such symptoms occur, vortioxetine should be discontinued and supportive treatment should be initiated. If concomitant use of vortioxetine is clinically warranted, patients should be made aware of a potential increased risk for serotonin syndrome, particularly during treatment initiation and dose increases.7

Abnormal bleeding. Treatment with serotonergic antidepressants (eg, SSRIs, SNRIs) may increase the risk of abnormal bleeding. Patients should be cautioned about the increased risk of bleeding when vortioxetine is coadministered with nonsteroidal anti-inflammatory drugs, including aspirin, or other drugs that affect coagulation.

Hyponatremia. This condition can occur in association with the syndrome of inappropriate antidiuretic hormone secretion.7

Drug Interactions
The concomitant administration of vortioxetine and strong CYP2D6 inhibitors (eg, bupropion, fluoxetine, paroxetine, or quinidine) may require a 50% reduction in the vortioxetine dose.7

When vortioxetine is coadministered with a strong CYP inducer (eg, rifampin, carbamazepine, or phenytoin) for more than 14 days, an increased vortioxetine dose can be considered. The maximum recommended dose should not exceed 3 times the original dose.7

Use in Specific Populations
Pregnancy. No adequate and well-controlled studies of vortioxetine have been conducted in pregnant women. Vortioxetine should be used during pregnancy only if the potential benefit justifies the potential risk to the fetus.7

Nursing mothers. It is not known whether vortioxetine is present in human milk. Because many drugs are present in human milk, and because of the potential for serious adverse reactions in nursing infants from vortioxetine, a decision should be made whether to discontinue nursing or to discontinue the drug, taking into account the importance of the drug to the mother.

Pediatric use. The safety and effectiveness of vortioxetine in the pediatric population have not been established.7

Conclusion
MDD is a common and chronic condition with a considerable clinical and economic burden. Although many antidepressants are available, patients respond to each medication differently. The approval of Brintellix by the FDA for the treatment of patients with MDD adds a new therapeutic option that is thought to act through multiple mechanisms of action that may benefit patients who do not respond well to current therapies. The efficacy of vortioxetine was demonstrated in 6 randomized, double-blind, placebo-controlled fixed-dose studies, including a study in the elderly and a maintenance study in adults with MDD.

The most common adverse reactions (incidence ≥5% and at least twice the rate of placebo) associated with vortioxetine were nausea, constipation, and vomiting.