Simponi Aria: A New Intravenous TNF Inhibitor for the Treatment of Patients with Moderate-to-Severe Rheumatoid Arthritis

Rheumatoid arthritis (RA), a chronic inflammatory autoimmune disorder that affects the lining, or synovium, of the joints, affects 1.3 million people in the United States.1,2 In addition to causing painful swelling that may eventually lead to bone erosion and joint deformity, RA can also affect other organs of the body, including the skin, eyes, lungs, and blood vessels.1,2

Although RA can occur in people in their 20s and 30s, it usually begins after age 40, affecting more than twice as many women as men.1,2 The average age of patients with RA is 66.8 years.2 In its early stage, RA may first affect smaller joints (ie, those that attach the fingers and toes), and as the disease progresses, it spreads to the knees, ankles, elbows, hips, and shoulders.1

An estimated 22% of all deaths from arthritis and other rheumatic conditions are attributed to RA.3 Aside from being associated with a high risk of disability and mortality, people with RA are twice as likely to die as persons of the same age without RA.3 Approximately 40% of all deaths associated with RA are attributed to cardiovascular causes, including ischemic heart disease and stroke.3

RA also has a substantial impact on a patient’s functional status and quality of life. One study showed that people with RA were 40% more likely to report fair or poor general health and twice as likely to have a health-related physical activity limitation.3,4

The management of patients with RA is aimed at reducing joint pain and swelling, alleviating stiffness, and preventing joint damage.2 According to the 2012 American College of Rheumatology (ACR) recommendations for the use of disease-modifying antirheumatic drugs (DMARDs) and biologic agents, including tumor necrosis factor (TNF) blockers, in the treatment of RA.6 “The goal for each RA patient should be low disease activity or remission. In ideal circumstances, RA remission should be the target of therapy, but in others, low disease activity may be an acceptable target,” the authors of the updated guidelines state.6

The ACR recommendations also state that decisions about treating to target are left to the clinician who is caring for the individual patient, based on the patient’s preferences, comorbid conditions, and other relevant factors. Moreover, treatment plans involve patient-tailored risk-­benefit analysis based on the clinician’s assessment and collaboration with the patient.6

The nonpharmacologic treatment of RA generally includes a combination of joint protection, the use of heat or cold to reduce pain, and physical or occupational therapy.2 Other self-management approaches include maintaining a healthy body weight and performing physical activity as appropriate, depending on the patient’s level of physical mobility.2

Because joint damage caused by RA occurs early, generally within the first 2 years of disease onset, it is vital that RA be diagnosed and treated early.1,2 The ACR panel recommended more aggressive treatment in early RA in the 2012 update than in the previous 2008 recommendations, most likely based on the potential for better outcomes, prevention of irreversible joint damage, preservation of physical function and health-related quality of life, and reduced work-related disability.6

Simponi Aria: A New Intravenous Option for RA
In July 2013, the US Food and Drug Administration (FDA) approved Simponi Aria (golimumab intravenous [IV]), a TNF inhibitor, for the treatment of moderate-to-severe RA in combination with methotrexate.7 Golimumab (Simponi) injection for subcutaneous use was previously approved by the FDA in 2009 for moderately to severely active RA in combination with methotrexate.7,8 In May 2013, golimumab for subcutaneous use received a new indication from the FDA for the treatment of ulcerative colitis that is resistant to previous treatment or requires continuous steroid therapy.9

According to John Hardin, MD, Director of Osteoarthritis at the Arthritis Foundation in Atlanta, and Professor of Medicine at Albert Einstein College of Medicine in the Bronx, NY, the availability of golimumab IV allows for its administration at an infusion center, which ensures that the patient is receiving the appropriate dose, because patient self-injection techniques may vary.7 Dr Hardin commented, “Logistically, it’s easier in some cases with IV infusions.”7

Elevated TNF-alpha levels in the blood, synovia, and joints have been implicated in the pathophysiology of RA. TNF-alpha is an important mediator of the articular inflammation that is characteristic of RA.10

Dosing
The recommended dose of golimumab IV for patients with moderate-to-severe RA is 2 mg/kg as an IV infusion over 30 minutes at weeks 0 and 4, and then every 8 weeks. The dilution of supplied golimumab IV solution with 0.9% weight/volume sodium chloride is required before administration. Golimumab IV should be given in combination with methotrexate. Other nonbiologic DMARDs, corticosteroids, nonsteroidal anti-inflammatory drugs (NSAIDs), and/or analgesics may be continued during treatment with golimumab IV.10

Phase 3 Clinical Trial: GO-FURTHER
The FDA approval of the new indication for golimumab IV was based on the randomized, double-blind, phase 3, placebo-controlled trial known as GO-FURTHER, which included 592 patients (aged ≥18 years) with moderately to severely active RA despite concurrent treatment with methotrexate who had not previously received a biologic TNF blocker. Patients were randomized to either go­limumab IV 2 mg/kg (N = 395) or to placebo (N = 197) over a 30-minute IV infusion at weeks 0, 4, and every 8 weeks thereafter in addition to their weekly maintenance dose of methotrexate (15-25 mg/kg).10,11

All patients who were initially receiving placebo plus methotrexate in the trial received golimumab IV plus methotrexate after week 24; however, the trial remained blinded until all patients had completed 52 weeks of treatment. Efficacy data were collected and analyzed through week 52. Patients were allowed to continue receiving stable doses of concomitant low-dose corticosteroids (equal to ≤10 mg of prednisone daily) and/or NSAIDs, and patients might have received oral methotrexate during the trial. The use of other DMARDs, including cytotoxic agents or other biologics, was prohibited.10 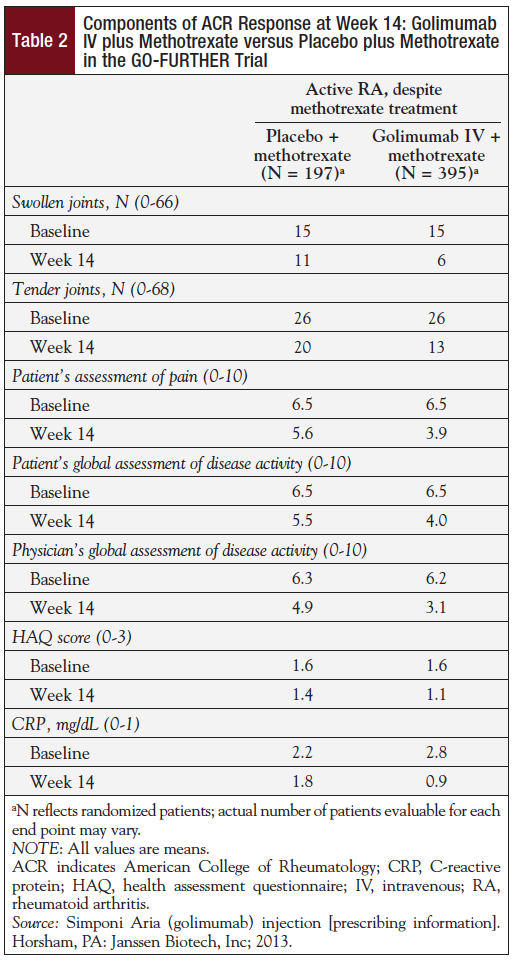 Golimumab contains a boxed warning about serious infections and malignancy. Serious infections that can lead to hospitalization or to death, including tuberculosis, bacterial sepsis, and invasive fungal (ie, histoplasmosis) and other opportunistic infections have occurred in patients receiving golimumab. Therapy with golimumab should not be started during an active infection. If an infection develops, the patient should be monitored carefully and golimumab treatment should be stopped if the infection becomes serious.

Lymphoma and other malignancies, some fatal, have been reported in children and in adolescent patients who were treated with TNF blockers, of which golimumab is a member.10

Warnings and Precautions
Invasive fungal infections. For patients who develop a systemic illness while taking golimumab IV, empiric antifungal therapy should be considered for those who live in or travel to regions where mycoses are endemic.10

Hepatitis B reactivation. Hepatitis B virus carriers should be monitored during and several months after therapy. If reactivation occurs, golimu­mab should be discontinued and antiviral therapy should be initiated.10

Heart failure. The worsening or new onset of heart failure may occur with golimumab. If worsening symptoms occur, the use of golimumab should be stopped.10

Switching between DMARDs. Care should be taken when switching from one biologic agent to another biologic agent, because overlapping biologic activity may further increase the risk of infection.10

Hematologic cytopenias. In postmarketing reports, pancytopenia, leukopenia, neutropenia, aplastic anemia, and thrombocytopenia have occurred in patients receiving TNF blockers. In clinical studies, cases of pancytopenia, leukopenia, neutropenia, and thrombocytopenia have occurred in patients treated with golimu­mab IV. Caution should be exercised when using TNF blockers, including golimumab IV, in patients who have or have had significant cytopenias.10

Anakinra. The concurrent administration of anakinra, an interleukin-1 antagonist, and another TNF blocker, was associated with a greater portion of serious infections and neutropenia but with no additional benefit compared with the TNF blocker alone. The combination of anakinra with TNF blockers, including golimumab IV, is therefore not recommended.10

Use in Specific Populations
Pregnancy. There are no adequate and well-controlled trials of golimu­mab in pregnant women. Golimumab should be used during pregnancy only if clearly needed.10

Nursing mothers. It is unknown whether golimumab is excreted in human milk or is absorbed systemically after ingestion. Because many drugs are excreted in human milk and there is a potential for adverse reactions in nursing infants from golimumab, consideration should be given as to whether to discontinue nursing or to discontinue golimumab, taking into account the importance of the drug to the mother.10

Pediatric use. The safety and effectiveness of golimumab in pediatric patients aged <18 years have not been established.10

Geriatric use. With respect to RA, there were no overall differences in serious adverse events, serious infections, and adverse events in golimumab-treated patients aged ≥65 years (N = 155) compared with younger golimumab-treated patients. Because there is usually a higher incidence of infections in the geriatric population in general, caution should be used in treating geriatric patients with golimumab.10

Conclusion
The approval of Simponi Aria (go­limumab IV) by the FDA in July 2013 for the treatment of moderate-to-­severe RA in combination with methotrexate adds a new TNF inhibitor to the treatment options of patients with this chronic and debilitating disease. An earlier, subcutaneous version of Simponi (golimumab subcutaneous) injection had been approved by the FDA in 2009 for moderately to severely active RA in combination with methotrexate. The IV route means in-office administration of the medication, which can be an advantage in cases where patient adherence is problematic, which can greatly affect outcomes.