Major depressive disorder (MDD), also known as clinical depression, is a chronic medical illness characterized by persistent sadness, loss of interest in normal activities, and in some cases, by physical symptoms.1 MDD is associated with serious emotional and biological manifestations that affect a person’s thoughts, feelings, behavior, mood, and physical health.1

An estimated 25 million people in the United States are affected by MDD annually; however, only 50% of patients with MDD receive treatment.2 Moreover, a national household survey revealed that 6.7% of US adults experienced a major depressive episode within a 12-month period.3

MDD has the potential to disrupt life by causing changes in sleep or appetite, poor concentration, loss of energy, low self-esteem, hopelessness, or guilt.2 Some people experience 1 episode of MDD in the course of a lifetime, whereas many people have recurrent episodes. Without treatment, an episode can last from several months to years.2

Most concerning is the fact that more than 15% of people with MDD take their own lives.4 Untreated MDD increases the risk of suicide—a leading cause of mortality in the United States that is responsible for 30,000 deaths annually.4 In addition, untreated MDD can also lead to a number of emotional, physical, and other health-related complications, including alcohol or substance abuse, anxiety, family conflicts, relationship difficulties, social isolation, and premature death from other medical conditions.1 As many as 30% of drug and alcohol users are estimated to have undetected MDD.4

Individuals who have had a stroke, or those with heart disease, diabetes, cancer, Parkinson’s disease, or HIV/AIDS are at an increased risk for depression.4 In older adults, MDD may go undiagnosed and untreated, because symptoms such as fatigue, loss of appetite, and sleep problems are also caused by other medical conditions.1

According to one study, the average annual cost of MDD in the United States is an estimated $83.1 billion, which includes $26.1 billion in direct medical costs, $5.4 billion in suicide-related mortality costs, and $51.5 billion in workplace costs.5 These totals would be considerably higher if they captured the costs of coexisting psychiatric and medical conditions or the role of related painful conditions.5

Treatments for MDD include pharmacologic therapy, psychotherapy, and electroconvulsive therapy (for some severe episodes or severe depression with psychosis).1,2 Other treatments may include transcranial magnetic stimulation, vagus nerve stimulation, aerobic exercise, and complementary and alternative medicines.1,2

The antidepressant drug classes are associated with class-specific side effects.1 Currently, SSRIs and serotonin–norepinephrine reuptake inhibitors are the cornerstones of managing patients with MDD.7

For the majority of adults with MDD, a combination of medication and psychotherapy is the most effective management approach.1 Finding the appropriate medication for a patient with MDD can be challenging, however, often requiring trial and error based on the individual patient’s response.

Genotyping tests, including cytochrome (CY) P450 and other specific genes, can help clinicians predict how well a patient can metabolize a medication and can identify which antidepressant may be a prudent option.1 Early diagnosis and management are crucial to improving the outcomes for patients with this serious and debilitating illness.

A New Serotonin–Norepinephrine Reuptake Inhibitor for the Treatment of MDD
On July 26, 2013, Fetzima (levomilnacipran; Forest Laboratories), a serotonin–norepinephrine reuptake inhibitor, was approved by the US Food and Drug Administration (FDA) for the treatment of MDD in adults.8 The approval of Fetzima was based on three 8-week, double-blind, placebo-controlled studies.9 Levomilnaci­pran is an active enantiomer of milnacipran, a drug that was approved by the FDA in 2009 for the treatment of fibromyalgia in adults.7,9 However, levomilnacipran is not approved for the management of fibromyalgia.9

According to Michael R. Liebowitz, MD, Professor of Clinical Psychiatry, Columbia University, New York, “As many people with MDD struggle to find a treatment that works for them, Fetzima provides patients and physicians with an additional option for treating this serious disease.”8

A dose adjustment is recommended when levomilnacipran is coadministered with strong inhibitors of CYP3A4 (eg, ketoconazole).9

Clinical Trials
The efficacy of levomilnacipran for the treatment of MDD was evaluated in three 8-week, randomized, double-blind, placebo-controlled studies (at doses of 40-120 mg once daily) in adult outpatients (aged 18-78 years) who met the Diagnostic and Statistical Manual of Mental Disorders, Fourth Edition, Text Revision criteria for the diagnosis of MDD.

Studies 1 and 2 were fixed-dose trials, and study 3 was a flexible-dose trial.9

Levomilnacipran was shown to be superior to placebo in all 3 studies, based on the improvement of depressive symptoms as measured by the Montgomery-Åsberg Depression Rating Scale total score (Table 1). 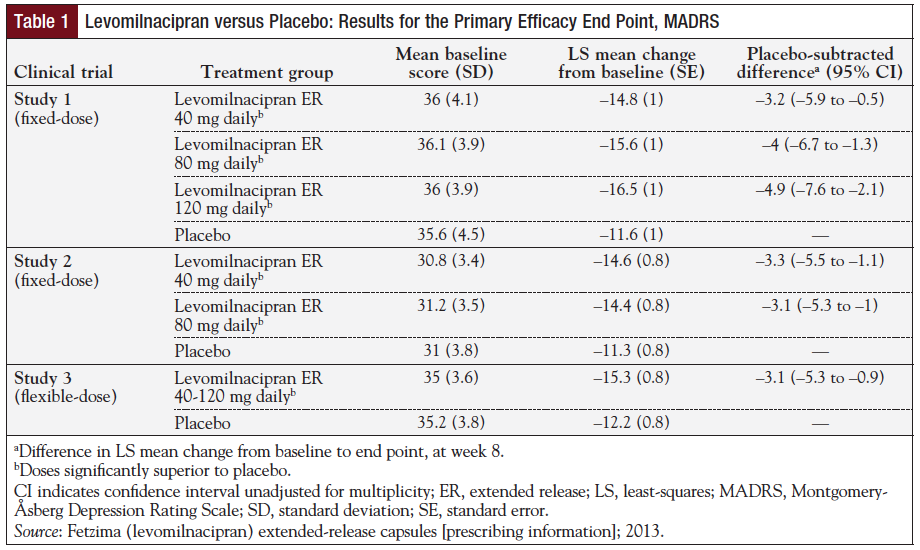 In addition, levomilnacipran demonstrated superiority versus placebo, as measured by improvement on the Sheehan Disability Scale functional impairment total score.9

Post-hoc analyses of the relationships between treatment outcome and age, sex, and race were not suggestive of any differential responsiveness on the basis of these patient characteristics.9

Adverse Events
The most common adverse reactions (≥5% incidence and at least twice the rate of placebo) associated with levomilnacipran are nausea, constipation, hyperhidrosis, heart rate increase, erectile dysfunction, tachycardia, vomiting, and palpitations. The occurrence rates of these adverse reactions compared with placebo are shown in Table 2.9 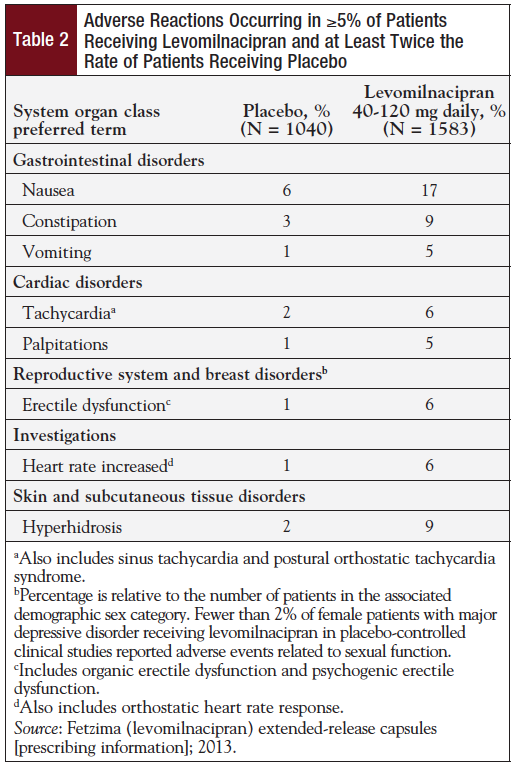 Based on pooled data from the short-term, placebo-controlled, fixed-dose studies, there were no dose-­related adverse reactions (>2% overall incidence) in patients treated with levomilnacipran across the dose range of 40 mg to 120 mg once daily, with the exception of urinary hesitation and erectile dysfunction (Table 3).9 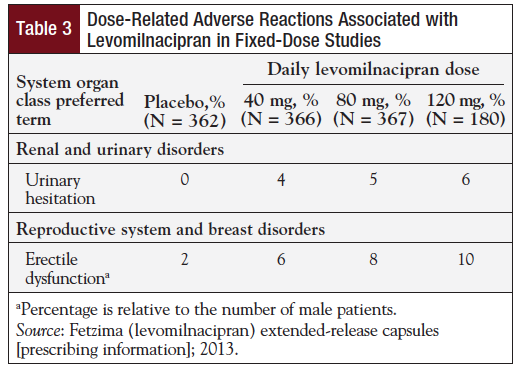 Warnings and Precautions
Boxed warning. The prescribing information for levomilnacipran includes a boxed warning about the increased risk of suicidal thinking and behavior in children, adolescents, and young adults who are taking antidepressants; patients should be monitored for worsening and emergence of suicidal thoughts and behaviors. It also states that levomilnacipran is not approved for use in pediatric patients.9

Suicidal thoughts and behaviors in adolescents and young adults. Patients should be monitored for clinical worsening and suicidal thinking or behavior.9

Serotonin syndrome. Serotonin syndrome has been reported with SSRIs and serotonin–norepinephrine reuptake inhibitors, both when taken as monotherapy, but especially when taken in combination with other sero­tonergic agents (including triptans, tricyclics, fentanyl, lithium, tramadol, tryptophan, buspirone, and St John’s wort). If such symptoms occur, levomilnacipran should be discontinued and supportive treatment should be initiated. If the concomitant use of levomilnacipran with other serotonergic drugs is clinically warranted, patients should be made aware of a potential increased risk for serotonin syndrome, particularly during treatment initiation and dose increases.9

Seizures. Seizures can occur with levomilnacipran, which should be used with caution in patients with a seizure disorder.

Hyponatremia. Hyponatremia can occur in association with the syndrome of inappropriate antidiuretic hormone secretion.9

Conclusion
The treatment of MDD can often be challenging. Having a novel therapeutic alternative to choose from offers a new and potentially improved option for patients whose symptoms do not improve with current therapies. A new treatment option for adults with MDD became available in July 2013 with the FDA approval of Fetzima (levomilnacipran), an oral, extended-release serotonin–norepinephrine reuptake inhibitor. In three 8-week, randomized, double-blind, placebo-controlled clinical studies, levomilnacipran extended release (at doses of 40-120 mg daily) demonstrated significant superiority over placebo in improving depressive symptoms in adult patients with MDD.

The most common adverse reactions (≥5% incidence and at least twice the rate of placebo) associated with levomilnacipran are nausea, constipation, hyperhidrosis, heart rate increase, erectile dysfunction, tachycardia, vomiting, and palpitations.