Approximately 25% of women who are diagnosed with breast cancer have HER2-positive tumors. The HER2 gene, which resides on chromosome 17, directs tumor cells to manufacture HER2 protein. This protein is a cell-surface receptor that compels the tumor cell to grow and to divide more frequently than normal, making HER2-positive breast cancer an aggressive phenotype.

Before the advent of HER2-directed therapies, patients diagnosed with HER2-positive disease had significantly shorter disease-free survival compared with patients with other breast cancer subtypes.1

Unmet Need in Trastuzumab-Resistant Breast Cancer
The American Cancer Society estimates that approximately 232,340 women will be diagnosed with invasive breast cancer, and approximately 39,620 deaths will occur from the disease in 2013.2 Since 1989, death rates from breast cancer have declined, with relatively larger decreases in women aged <50 years, in part as a result of earlier detection and increasingly improved treatments.2

Much of the increased survival for patients with HER2-positive breast cancer is attributed to the development of HER2-targeted therapies, including trastuzumab (Herceptin), pertuzumab (Perjeta), and lapatinib (Tykerb).3 The first phase 3 clinical trial that compared trastuzumab plus chemotherapy versus chemotherapy alone in patients with HER2-positive metastatic breast cancer demonstrated robust improvements in response rate (50% vs 32%, respectively), median time to progression (7.4 months vs 4.6 months, respectively), and median overall survival ([OS] 25.1 months vs 20.3 months, respectively) with the addition of trastuzumab.4 In addition, 2 meta-analyses have confirmed the OS benefit of adding HER2-targeted therapy to standard treatment in patients with early-stage or metastatic HER2-positive breast cancer.5,6

However, primary and secondary resistance to trastuzumab occurs in the advanced breast cancer setting: none of these patients is cured. In 2013, approximately 13,000 patients with HER2-positive metastatic breast cancer will have disease recurrence after trastuzumab treatment.7 Concerted efforts are under way to identify the mechanisms of trastuzumab resistance, as well as novel “druggable” targets for this patient population.8

Currently, treatment strategies for patients with trastuzumab-resistant HER2-positive breast cancer are selected on the basis of patient-specific factors (ie, age, comorbidities), disease- related factors, and cost.9 Therapy alternatives include the combination of pertuzumab, trastuzumab, and a taxane; lapatinib plus trastuzumab; lapatinib plus capecitabine; and the continued use of trastuzumab plus chemotherapy.10

FDA Approval of Ado-Trastuzumab Emtansine Fills an Unmet Need
In February 2013, the US Food and Drug Administration (FDA) granted accelerated approval for ado-trastuzumab emtansine (Kadcyla; Genentech, Inc), also known as T-DM1, for the treatment of patients with HER2-positive metastatic breast cancer who were previously treated with trastuzumab and with taxanes.11 The approval was based on the result of a single, open-label trial of patients with HER2-positive metastatic breast cancer: T-DM1 demonstrated a significant 5.8-month improvement in median OS and a 3.2-month improvement in median progression-free survival (PFS) compared with the combination of lapatinib plus capecitabine.12

In an interview regarding T-DM1, Hope S. Rugo, MD, Director, Breast Oncology Clinical Trials Program, University of California, San Francisco, stated, “Use of the immunoconjugate—trastuzumab linked to a microtubule inhibitor [DM1]—was shown in trials to be better in every way: response, progression-free survival, overall survival, and tolerability.”9

According to the drug manufacturer, 1 cycle (once in 21 days) of T-DM1 costs $9800. For comparison, the combination of lapatinib and capecitabine costs approximately $10,460 monthly.13

Dosing and Administration
T-DM1 is administered intravenously at 3.6 mg/kg on day 1 of a 21-day cycle. No loading dose or premedications are required. Treatment with T-DM1 should be continued until disease progression or until unacceptable toxicity occurs.

Dose Modifications Based on Toxicity
The dose of T-DM1 may be modified if hematologic or nonhematologic toxicities occur, including grade 3 or 4 cytopenias; cardiac, hepatic, or renal toxicities; pulmonary complications; neurotoxicity; or other toxicities. In general, T-DM1 is withheld until resolution, followed by restarting therapy at the same dose or at a reduced dose, depending on the type of toxicity and whether it was attributable to T-DM1.12

Mechanism of Action
T-DM1 is a HER2-targeted antibody drug conjugate. The antibody is the humanized anti-HER2 immunoglobulin G1, ado-trastuzumab. The small-molecule drug DM1 is a microtubule inhibitor. On binding to subdomain IV of the HER2 receptor, T-DM1 undergoes receptor-mediated internalization and lysosomal degradation, resulting in intracellular release of DM1-containing cytotoxic catabolites. Binding of DM1 to tubulin disrupts microtubule networks in the cell, resulting in cell-cycle arrest and cell death. In vitro studies have shown that similar to trastuzumab, T-DM1 inhibits HER2 receptor signaling, mediates antibody-dependent cell-mediated cytotoxicity, and inhibits shedding of the HER2 extracellular domain in human breast cancer cells that overexpress the HER2 gene.12

The availability of an antibody drug conjugate for selected patients with breast cancer offers an exciting and novel approach, particularly for women who wish to avoid the side effects of chemotherapy. According to Julie R. Gralow, MD, Director, Breast Medical Oncology, Seattle Cancer Care Alliance, WA, T-DM1 “is a true magic bullet. For the 20% to 25% of breast cancer patients that have HER2-positive breast cancer (HER2-expressing breast cancer), this is an antibody that can take chemotherapy directly to the tumor cell and deliver
it inside the cell. Then the bulk of the body does not get exposed to the chemotherapy.”14

EMILIA: A Phase 3 Clinical Trial
T-DM1 was approved by the FDA based on the results of the EMILIA trial, a randomized, multicenter, open-label trial of 991 patients with HER2-positive, unresectable, locally advanced or metastatic breast cancer.15 Previous taxane- and trastuzumab- based therapies were required before trial enrollment. Patients who had only received previous adjuvant therapy were required to have disease recurrence during or within 6 months of completing adjuvant therapy. Tumor samples were required to show evidence of HER2 overexpression, defined as 3+ immunohistochemistry by Dako’s HercepTest, or evidence of HER2 overexpression defined as a fluo­rescence in situ hybridization (FISH) amplification ratio of ≥2.0 by Dako’s HER2 FISH pharmDx test kit.12,15

Trial Design and Patient Popu­lation. Patients in the EMILIA trial were randomized to T-DM1 or to lapatinib plus capecitabine.12 Ran­domization was stratified by world region (ie, United States, Western Europe, or other), the number of previous chemotherapy regimens used for unresectable locally advanced or metastatic disease, and by visceral versus nonvisceral disease as determined by the investigators.

Patients were treated with T-DM1 or with lapatinib plus capecitabine until disease progression, consent withdrawal, or until reaching an unacceptable toxicity level.12

The patient demographics and baseline tumor characteristics were balanced between treatment arms in the EMILIA trial.12 All patients had metastatic disease at study entry. The median age was approximately 53 years (range, 24-84 years); 74% of patients were white, 18% were Asian, and 5% were black. All but 5 patients were women. Tumor prognostic characteristics, including hormone receptor status (positive, 55%; negative, 43%), presence of visceral disease (68%) and nonvisceral disease only (33%), and the number of metastatic sites (<3, 61%; ≥3, 37%), were similar in the study arms.12 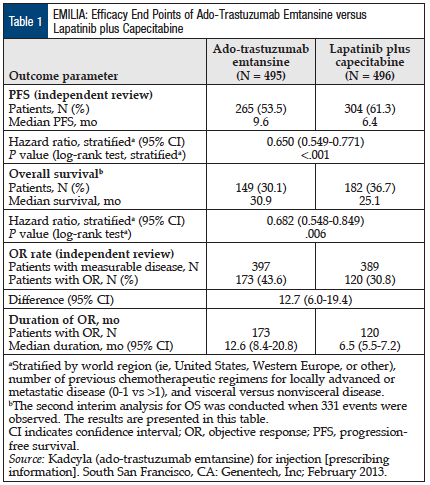 Dose reduction was necessary for 16.3% of patients in the T-DM1 arm; capecitabine doses and lapatinib doses were reduced for 53.4% and 27.3% of the patients, respectively.16
At the time of the primary efficacy analysis, median time with therapy was 5.7 months for T-DM1, 4.9 months for lapatinib, and 4.8 months for capecitabine.12 The coprimary efficacy end points were PFS based on tumor response assessments by an independent review committee and on OS.

Subgroup analyses using baseline patient characteristics indicated that the use of single-agent T-DM1 was superior to lapatinib plus capecitabine for all patient subsets except those aged ≥65 years.15 A subsequent biomarker analysis demonstrated that patients in EMILIA whose tumors expressed high HER2 messenger RNA levels derived more benefit from T-DM1 than patients with lower levels of expression. In high HER2 express­ors, the median PFS was 34.1 months with T-DM1 versus 24.8 months with lapatinib plus capecitabine.17 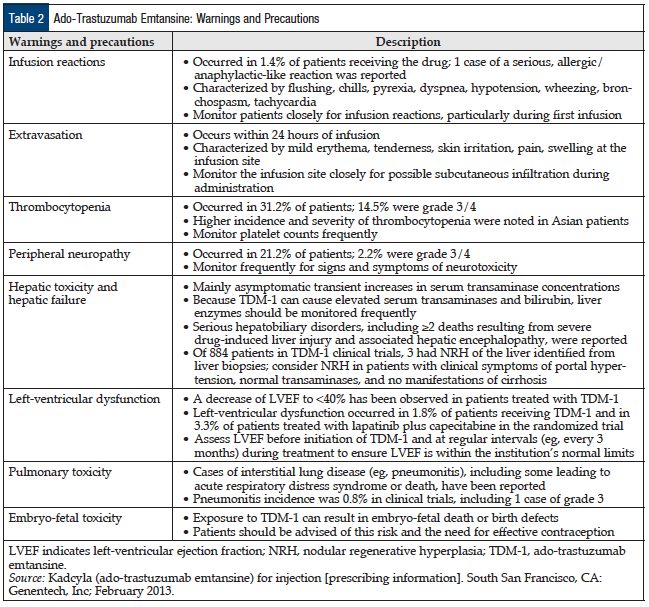 The FDA has issued a warning to prescribers advising that they should add “ado-” to the nonproprietary name “trastuzumab” when discussing T-DM1 to avoid confusion between Herceptin and Kadcyla, which was reported in clinical trials.18

Conclusion
T-DM1, which several experts have called a “magic bullet,” combines trastuzumab and DM1 without causing traditional chemotherapy side effects, such as alopecia, neutropenia, or vomiting. For patients with HER2-positive metastatic breast cancer who are resistant to trastuzumab and to taxanes, single-agent T-DM1 offers clinically and statistically significant OS and PFS benefits, with a favorable tolerability profile on a convenient, once-every-3-week dosing schedule.