Prostate cancer places a significant burden on the US healthcare system. Using Surveillance, Epidemiology and End Results (SEER) data, Stokes and colleagues estimated the survival of men aged ≥65 years who were diagnosed with prostate cancer between the calendar years of 1991 and 2002.4

The medical cost data were obtained from the SEER-Medicare database and were estimated during specific phases of cancer care. These cost estimates were then combined with survival data to determine the total lifetime costs and the prostate cancer–related lifetime costs. The model estimated total lifetime medical costs of approximately $110,500 per patient (in 2004 US dollars).4 The prostate cancer–related costs made up approximately 31% of the total costs, or more than $34,000 per patient.4

Patients with prostate cancer and bone metastases utilize an inordinate amount of healthcare resources. A retrospective, observational study using health insurance claims data for episodes of care from September 2002 to June 2011 demonstrated that, among patients with prostate cancer, the cost of a skeletal-related event ranged from approximately $11,700 for an outpatient episode to more than $54,000 for an inpatient episode.5

The 2 radiopharmaceuticals, strontium-89 and samarium-153 EDTMP, are beta-particle emitters. Both were approved by the US Food and Drug Administration (FDA) on the basis of randomized phase 3 clinical trials that demonstrated an improvement in pain in patients with metastatic prostate cancer.7,8

By contrast, sipuleucel-T (Provenge), abiraterone (Zytiga), and enzalutamide (Xtandi) have demonstrated advantages in OS in patients with metastatic prostate cancer, but these agents do not target disease that has spread to bone and are not indicated specifically for patients with prostate cancer plus bone metastases.9-11

FDA Approves Xofigo for Metastatic CRPC with Bone Metastasis
In May 2013, the FDA approved radium Ra 223 dichloride (Xofigo Injection [formerly known as Alpharadin]; Bayer HealthCare Pharmaceuticals) for the treatment of patients with castration-resistant prostate cancer (CRPC) plus symptomatic bone metastases and no known visceral metastatic disease.12 In a prespecified interim analysis, radium Ra 223 dichloride (radium-223) combined with best standard of care demonstrated a significant 3.2-month (hazard ratio, 0.70; 95% confidence interval, 0.55-0.88; P = .00185) improvement in median OS compared with placebo plus best standard of care.13 The improvement in OS was supported by a delay in time to the first symptomatic skeletal-related event favoring the radium-223 arm.13

In an interview regarding this new radiopharmaceutical, Daniel P. Petrylak, MD, Director of the Genitourinary Oncology Program at the Yale Cancer Center, New Haven, CT, noted that radium-223 “is the first isotope to show a survival benefit [in advanced prostate cancer]….Now we need to do the studies to know how to best sequence these drugs.”14

The availability of radium-223 offers a novel therapeutic alternative for patients with CRPC and bone metastasis, particularly for those who wish to avoid the side effects of chemotherapy. According to Nicholas J. Vogel­zang, MD, a genitourinary oncologist at Comprehensive Cancer Centers of Nevada, Las Vegas, “In general, about half of [patients with advanced prostate cancer] say they will not take chemotherapy. For them, [radium-223] is a wonderful option because it suppresses the cancer, controls the pain, and extends their life.”15

Mechanism of Action and Pharmacodynamics
The active component in Xofigo is the alpha particle–emitting isotope radium-223, which mimics calcium and forms complexes with the bone mineral hydroxyapatite at areas of increased bone turnover, such as bone metastases. The high energy transfer of alpha emitters increases the breaking frequency of double-strand DNA in adjacent cells, leading to an antitumor effect on bone metastases. The alpha particle range from radium-223 dichloride localizes the impact of the drug and limits damage to the surrounding normal tissue.18

In a phase 2 randomized trial that compared radium-223 and placebo, a significant difference was seen in favor of radium-223 in all 5 biomarkers for bone turnover.18

Dosing and Administration
The recommended dose and schedule for radium-223 is 50 kBq/kg body weight, which is administered by slow intravenous injection over 1 minute every 4 weeks for a total of 6 injections. The safety and efficacy of radium-223 beyond 6 injections have not been studied.18

ALYMPCA: A Pivotal Phase 3 Clinical Trial
Radium-223 was approved by the FDA based on the results of a single, phase 3 clinical trial—the Alpharadin in Patients with Symptomatic Hormone Refractory Prostate Cancer with Skeletal Metastases (ALSYMPCA) trial—a randomized, multicenter, double-blind study of more than 800 patients with CRPC and symptomatic bone metastases. Patients were stratified by baseline alkaline phosphatase, bisphosphonate use, and previous docetaxel exposure.18

Therapy was continued until unacceptable toxicity or until initiation of cytotoxic chemotherapy, other systemic radioisotope, hemibody EBRT, or other investigational drugs.

The primary efficacy end point was OS. A key secondary efficacy end point was time to first symptomatic skeletal event, which was defined as EBRT to relieve skeletal symptoms, new symptomatic pathologic bone fracture, occurrence of spinal cord compression, or tumor-related orthopedic surgical intervention. There were no scheduled radiographic assessments performed during the study. All patients were to continue androgen-deprivation therapy.18

Patient Population
Patient demographics and baseline disease characteristics were balanced between the 2 arms. The patients’ median age was 71 years (range, 44-94 years), with a racial distribution of 94% white, 4% Asian, 2% black, and <1% other. The Eastern Cooperative Oncology Group performance status was 0 to 1 in 86% of patients.18

During the study period, 83% of the patients in the radium-223 arm and 82% of the patients in the placebo arm were also using gonadotropin-releasing hormone agonists; 21% and 34% of patients, respectively, were using concomitant antiandrogens. The use of systemic corticosteroids (41%) and
bisphosphonates (40%) was equal between the 2 arms.18 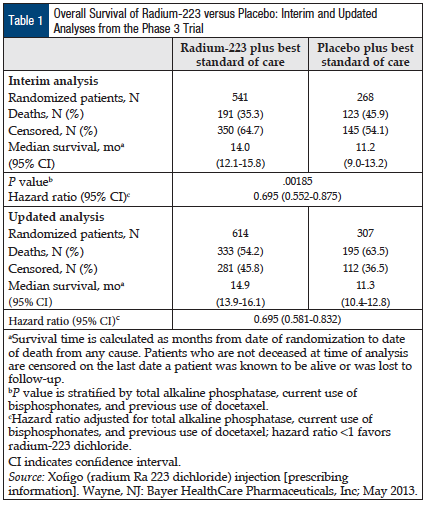 Efficacy
The prespecified interim analysis of ALSYMPCA revealed a significant improvement in OS in patients receiving radium-223 plus best standard of care compared with patients receiving placebo plus best standard of care (Figure), with a median OS of 14.0 months with radium-223 versus 11.2 months with placebo, for a difference of 3.2 months (Table 1).13,18 The median duration of treatment was 20 weeks (6 cycles) with radium-223 and 18 weeks (5 cycles) with placebo.18

The survival results were supported by a delay in the time to first symptomatic skeletal event favoring the radium-223 arm. The majority of events consisted of treatment with EBRT to bone metastases.18 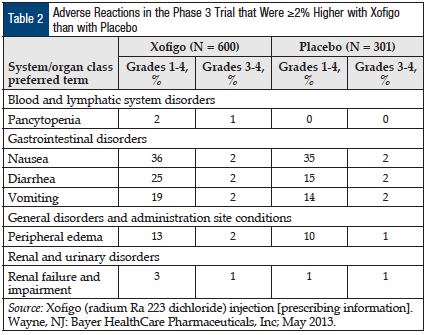 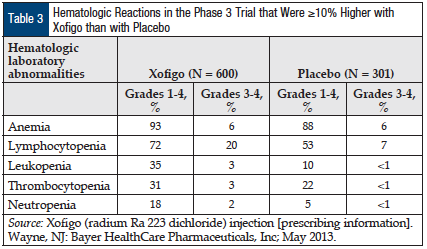 Warnings and Precautions
Fluid status. Radium-223 can result in adverse reactions such as diarrhea, nausea, and vomiting, which may result in dehydration. Patients’ oral intake and fluid status should be care­fully monitored, and patients who display signs or symptoms of dehydration or hypovolemia should be promptly treated.18

Secondary malignant neoplasms. Radium-223 contributes to a patient’s overall long-term cumulative radiation exposure, which may be associated with increased risk of cancer and hereditary defects. Because of its mechanism of action and neoplastic changes, including osteosarcomas in rats after receiving radium-223, radium-223 may increase the risk of osteosarcoma or other secondary malignant neoplasms.

However, the overall incidence of new malignancies in the randomized ALSYMPCA trial was lower in the radium-223 arm compared with in the placebo arm (<1% vs 2%, respectively). The expected latency period for the development of secondary malignancies exceeds the duration of follow-up for patients in the trial.18

Contraception. Because of the potential effects on spermatogenesis that is associated with radiation treatment, men who are sexually active and their female partners of reproductive potential should be advised to use highly effective contraceptives during and for 6 months after completing treatment with radium-223.18 This new therapy is not to be used in women.

Myelosuppression (ie, thrombocytopenia, neutropenia, pancytopenia, and leukopenia) has been reported in patients treated with radium-223. Complete blood counts were obtained every 4 weeks before each dose. Nadir complete blood counts and bone marrow recovery times were not well characterized in ALSYMPCA.18 In a single-dose phase 1 study of radium-223, neutrophil and platelet count nadirs occurred 2 to 3 weeks after the administration of radium-223 at doses of 1 to 5 times that of the recommended dose. Most patients recovered 6 to 8 weeks after administration.18

Monitoring. Hematologic evaluation of patients must be performed at baseline and before every dose of radium-223. Absolute neutrophil counts, platelet counts, and hemoglobin levels must meet minimum requirements as specified in the product’s labeling information. If these values do not recover within 6 to 8 weeks after the last administration of radium-223, despite supportive care, treatment should be discontinued.18

Patients with evidence of compromised bone marrow reserve should be monitored closely and should be provided with supportive-care measures when clinically indicated. Radium-223 should be discontinued in patients who experience life-threatening complications despite supportive care for bone marrow failure.18

The safety and efficacy of concomitant chemotherapy with radium-223 have not been established. Outside of a clinical trial, the concomitant use of radium-223 with chemotherapy is not recommended because of the potential for additive myelosuppression. If chemotherapy, other systemic radioisotopes, or hemibody external radiotherapy are administered during the treatment period, radium-223 should be discontinued.18

Conclusion
For patients with advanced prostate cancer and bone metastasis, single-­agent radium-223 offers clinically and statistically significant efficacy benefits, with a favorable tolerability profile and a convenient dosing schedule. Experts suggest that this bone-targeting radiopharmaceutical is a viable treatment option for men with CRPC who have received, or who are ineligible for, or who prefer to delay or to avoid cytotoxic chemotherapy. Combination studies with radium-223  and hormonal agents, immunomodulatory agents, and doce­taxel are pending or are under way to further elucidate the role of radium-223 as a part of the armamentarium for patients with prostate cancer.19