Tafinlar and Mekinist: Two Oral Targeted Kinase Inhibitors for the Treatment of Patients with Metastatic Melanoma and BRAF Mutations

Cutaneous melanoma, although not the most common skin cancer, is the most deadly.1 Based on data collected between 2003 and 2009, the 5-year survival rate for Americans with metastatic melanoma remains very low—only 16%—for all disease stages and for both sexes.2 The National Cancer Institute has estimated that approximately 1 in 49 people will be diagnosed with melanoma in the United States, and more than 9450 people will die of this disease in 2013.2

The incidence of melanoma is increasing in the United States, particularly among children and adolescents.2 An analysis of first-time melanoma diagnosis in patients aged 18 to 39 years that occurred between 1970 and 2009 showed that the incidence of melanoma increased 8-fold among young women and 4-fold among young men.3 A study using data from 1973 to 2009 documented an average 2% annual increase in melanoma for children under age 19 years, particularly for girls and adolescents between 15 and 19 years.4

These trends in melanoma diagnosis rates are concerning because of the severity of the disease and the potential impact on healthcare resource utilization. An analysis of Medicare claims data from 1991 to 2005 demonstrated that patients with melanoma, particularly those with metastatic disease, utilize substantial healthcare resources.5

In this study, patients with metastatic melanoma had a monthly average of more than $11,000 in total healthcare costs, the majority of which was related to inpatient hospital services.5 Of note, this cost analysis was conducted before the availability of novel therapies recently approved for metastatic melanoma, including ipilimumab (Yervoy) and vemurafenib (Zelboraf)

FDA Approves 2 New Options for Melanoma
In May 2013, the US Food and Drug Administration (FDA) approved 2 BRAF-mutation targeted agents—da­brafenib (Tafinlar; GlaxoSmithKline), a BRAF mutation inhibitor, and trametinib (Mekinist; GlaxoSmithKline), a MEK inhibitor—for the treatment of patients with metastatic melanoma.6,7

Dabrafenib is indicated for the treatment of patients with unresectable or metastatic melanoma and the BRAF V600E mutation as detected by a test that was approved by the FDA together with this agent. Dabrafenib is not indicated for the treatment of patients with the wild-type BRAF melanoma because of the potential risk of tumor promotion in those patients.8 Dabraf­enib’s approval was based on a progression-free survival (PFS) benefit, as demonstrated in a multicenter, international, open-label, randomized, active-controlled trial.8

Trametinib is indicated for the treatment of patients with unresectable or metastatic melanoma with BRAF V600E or BRAF V600K mutation as detected by the FDA-approved test. Trametinib is not indicated for the treatment of patients who have received previous therapy with a BRAF inhibitor.9 The approval of trametinib was based on the demonstration of improved PFS in a multicenter, international, open-label, randomized, active-controlled trial.9

Approximately 50% of patients with cutaneous melanoma have a BRAF gene mutation.10,11 Concurrent with the approvals of dabrafenib and trametinib, the FDA approved the THxID BRAF assay (bioMérieux, Inc; Hazlewood, MO) for the detection of BRAF V600E and BRAF V600K mutations.6,7

In an interview regarding the recent advances in treatments for patients with metastatic melanoma, Lynn M. Schuchter, MD, Chief of Hematology/Oncology at the University of Pennsyl­vania, stated, “Now we have this wealth of options to consider. It is amazing that, in 2013, chemotherapy is not the first or second choice for patients with melanoma. It is now targeted therapies, if appropriate, or immunotherapy.”12

Dosing and Administration
The recommended dabrafenib dose is 150 mg taken orally twice daily, approximately 12 hours apart, until disease progression or until unacceptable toxicity occurs.8 Patients should take dabrafenib at least 1 hour before a meal or at least 2 hours after a meal. A missed dose of dabrafenib can be taken up to 6 hours before the next dose. Dabrafenib capsules should not be opened, crushed, or broken.8 No dose adjustment is recommended for patients with new primary cutaneous malignancies.8

The recommended trametinib dose is 2 mg taken orally once daily until disease progression or until unacceptable toxicity.9 Patients should take trametinib at least 1 hour before a meal or 2 hours after a meal. A missed trametinib dose should not be taken within 12 hours of the next dose.9

Phase 3 Clinical Trial: Dabrafenib
In a pivotal phase 3 clinical trial of dabrafenib, 250 patients with unresectable stage III or stage IV melanoma and a documented BRAF V600E mutation were randomly assigned to oral da­brafenib twice daily (N = 187) or to intravenous dacarbazine 1000 mg/m2 every 3 weeks (N = 63), respectively, in a 3:1 ratio.8,15 Patients who had received previous treatment with a BRAF inhibitor or a MEK inhibitor were excluded.15 Randomi­zation was stratified by disease stage at baseline.15

The primary end point of this study was PFS, as determined by investigators.8,15 An independent radiology review committee assessed the additional efficacy outcome measures of PFS, confirmed objective response rate (ORR), and duration of response in prespecified supportive analyses.8,15 The patients in the study were allowed to cross over to the alternative treatment when their disease progressed.

The median age of the patients was 52 years. Most patients were male (60%), white (99%), with an Eastern Cooperative Oncology Group (ECOG) performance status of 0 (67%), and had M1c disease (66%) and normal lactate dehydrogenase (62%). All patients had BRAF V600E mutations as determined by a clinical trial assay at a centralized testing site.8,15

Table 1 summarizes the PFS, the confirmed ORR, and the duration of response in the phase 3 study of da­brafenib in patients with BRAF mutation–positive advanced melanoma.8 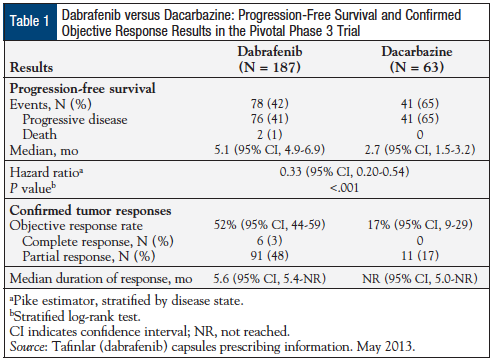 Updated overall survival (OS) data from the phase 3 study of dabrafenib versus dacarbazine were presented during the June 2013 American Society of Clinical Oncology annual meeting.17 With median follow-up times of 15 months and 13 months for the dabrafenib and dacarbazine cohorts, respectively, OS was 18.2 months in patients who received dabrafenib compared with 15.6 months for those receiving dacarbazine (HR, 0.76; 95% CI, 0.48-1.21), but this difference was not statistically significant.17 Because 57% of the patients who had originally received dacarbazine crossed over to dabrafenib, the OS benefit from the initial dabrafenib therapy was likely obscured.17 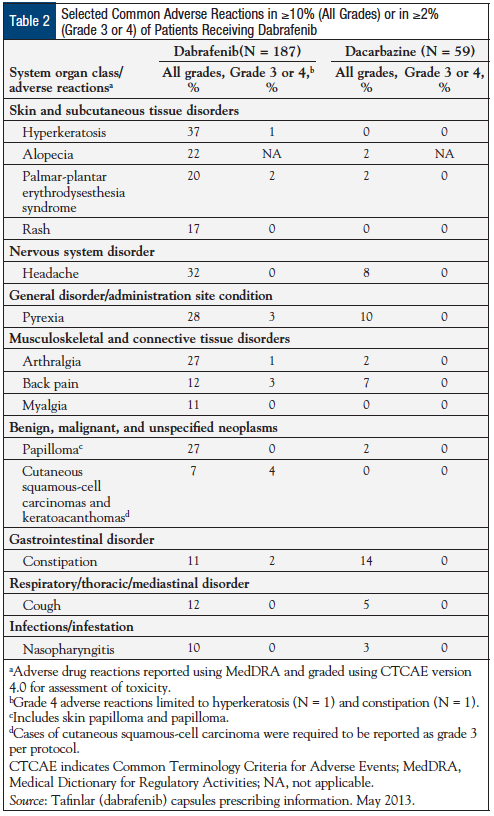 The incidence of adverse events resulting in the permanent discontinuation of the study medication in this trial was 3% with dabrafenib and with dacarbazine.8,15

Warnings and Precautions
New Cutaneous Malignancies
Dabrafenib is associated with an increased incidence of cutaneous squamous-cell carcinoma, keratoacanthoma, and melanoma.8 In the phase 3 clinical trial, cutaneous squamous-cell carcinomas (cuSCC) and keratoacanthomas occurred in 7% (14:187) of patients who received dabrafenib and in none of the patients receiving dacarbazine.8,15 The incidence of cuSCC was 11% across the clinical trials of dabraf­enib that included 586 patients, with a median time to first cuSCC of 9 weeks (range, 1-53 weeks).8

Dermatologic evaluations are recommended before the initiation of dabraf­enib, every 2 months while receiving dabrafenib, and for up to 6 months after the discontinuation of dabrafenib.8

Serious Febrile Drug Reactions
In the phase 3 study, 3.7% (7:187) of patients receiving dabrafenib and none of the patients treated with dacarbazine had serious febrile drug reactions (ie, serious fever or fever of any severity accompanied by hypotension, rigors or chills, dehydration, or renal failure in the absence of another identifiable cause such as infection).8,15 Fever (serious and nonserious) occurred in 28% of patients who received dabrafenib and in 10% of patients receiving dacarbazine.8,15

Other Adverse Events, Precautions
Dabrafenib has also been associated with hyperglycemia, uveitis and iritis, and glucose-6-phosphate dehydrogenase deficiency.8
Patients receiving dabrafenib should be routinely monitored for visual symptoms, as well as for hemolytic anemia.8 Serum glucose levels should be monitored in patients who have preexisting diabetes or hyperglycemia.8

Because dabrafenib can cause fetal harm, women of reproductive potential should be warned of the potential risk to a fetus. Dabrafenib may also render hormonal contraceptives less effective, such that an alternative method of contraception should be used.8 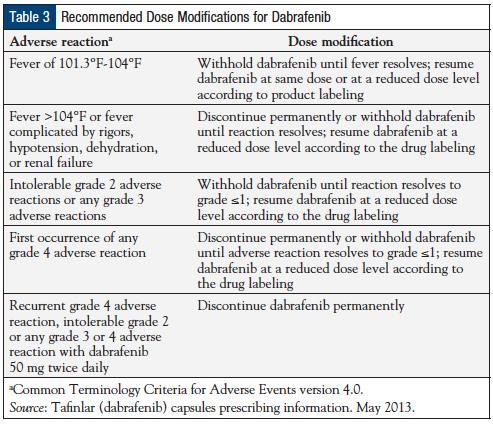 Phase 3 Clinical Trial: Trametinib
The FDA approval of trametinib was based on the demonstration of improved PFS in a phase 3, international, open-label, randomized, active-­controlled trial that enrolled 322 patients with histologically confirmed stage IIIc or stage IV melanoma.9,18 Patients were determined to be BRAF V600E or V600K mutation–­positive based on centralized testing.9 No more than 1 previous chemotherapy regimen was permitted, and patients with previous exposure to BRAF inhibitors or to MEK inhibitors were ineligible for the trial.9,18 Patients with abnormal left-ventricular ejection fraction (LVEF), a history of acute coronary syndrome within the past 6 months, or with current evidence of New York Heart Association Class II or greater congestive heart failure were excluded from the trial.9

Almost half (47%) of the patients crossed over to the trametinib arm at the time of disease progression with chemotherapy.9,18

Efficacy
PFS, the study’s primary end point, and OS, a secondary end point, were significantly improved with trametinib. The investigators reported a statistically significant increase in PFS in the patients who were treated with trametinib compared with the patients who received chemotherapy (HR, 0.45; 95% CI, 0.33-0.63; P <.001).9,18 The median PFS was 4.8 months for patients taking trametinib (95% CI, 4.3-4.9) compared with 1.5 months for patients receiving chemotherapy (95% CI, 1.4-2.7).9,18

The significant improvement in PFS was observed in all patient subgroups, with the exception of the subgroups with the V600K mutation and in patients aged ≥65 years.18 The 6-month OS rate was 81% in the trametinib group compared with 67% in the chemotherapy group, a significant difference despite crossover (HR, 0.54; 95% CI, 0.32-0.92; P = .01).18

Table 4 summarizes the PFS, confirmed ORR, and the duration of response findings in the phase 3 study of trametinib in patients with BRAF mutation–positive advanced melanoma.9 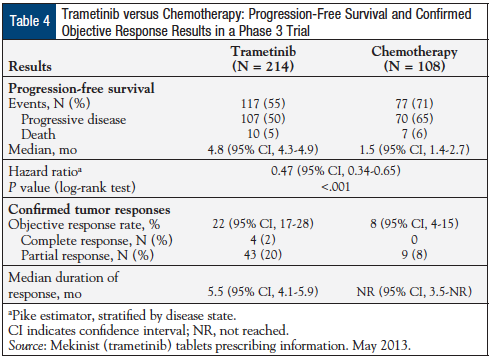 Safety
Rash, diarrhea, and peripheral edema were the most common adverse effects in patients who received trametinib in the phase 3 clinical trial.18 No secondary skin neoplasms were observed.18

Table 5 summarizes the adverse reactions that occurred in ≥10% of patients who were treated with trametinib and at a higher incidence than in the control arm.9 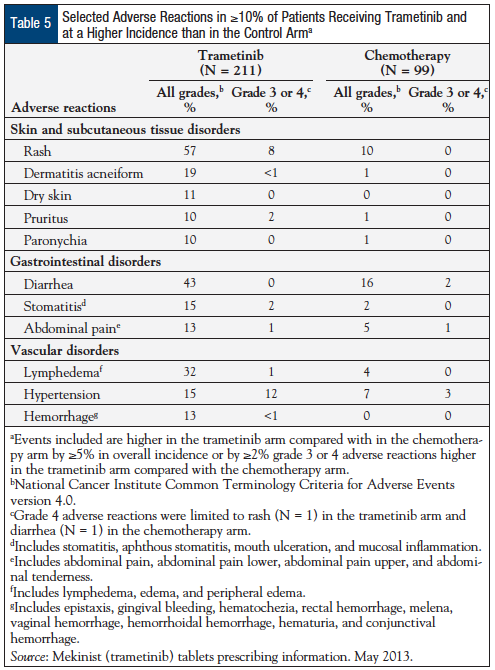 Cardiomyopathy
In the phase 3 trial, cardiomyopathy (including cardiac failure, left-ventricular dysfunction, or decreased LVEF) occurred in 7% (14:211) of patients who received trametinib and in none of those receiving chemotherapy.9,17 Cardiomyopathy resolved in 10 of these 14 patients.9 Trametinib therapy should be discontinued if the absolute LVEF value decreases by 10% from pretreatment values and is less than the lower limit of normal.9 If symptomatic cardiomyopathy or persistent, asymptomatic LVEF dysfunction does not resolve within 4 weeks, trametinib should be permanently discontinued.9

Skin Toxicity
The overall incidence of skin toxicity—including rash, dermatitis, acneiform rash, palmar-plantar erythrodys­esthesia syndrome, erythema—was 87% in patients who received trametinib compared with 13% in chemotherapy-receiving patients in the phase 3 study.9 Severe skin toxicity occurred in 12% of the patients in the trametinib arm.9 Overall, 6% of patients who received trametinib were hospitalized, most often for secondary skin infections requiring intravenous antibiotics or severe skin adverse events without secondary infection.9 Patients receiving trametinib should be carefully monitored for skin-related adverse events and for secondary infections.9

Retinal Detachment
Ophthalmologic examinations, including retinal evaluations, were performed before treatment and at regular intervals during the phase 3 study. One patient receiving trametinib developed RPED, and no cases of RPED were identified in patients receiving chemotherapy.9 The reduction in visual acuity secondary to RPED resolved after a median of 11.5 days (range, 3-71 days) after interruption of trametinib dosing.9 Ophthalmologic evaluations should be performed any time a patient reports visual disturbances while using trametinib. If available, these results should be compared with baseline.9 Withhold trametinib therapy for up to 3 weeks if RPED is diagnosed.9

Table 6 summarizes these warnings and precautions associated with the use of trametinib, as well as recommendations for monitoring and appropriate drug use. 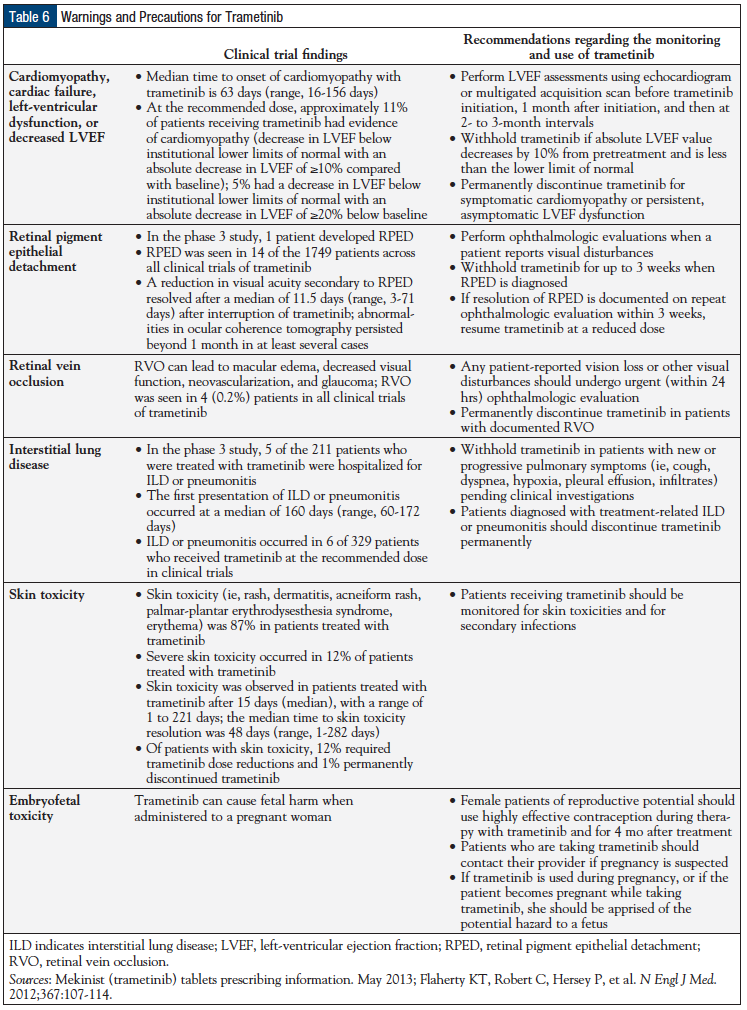 Although dabrafenib and trametinib are currently approved as single agents, clinicians have expressed interest in their potential value when used in combination for the treatment of advanced melanoma.19

Based on data from a phase 1/2 study comparing dabrafenib monotherapy with the combination, in July 2013, GlaxoSmithKline submitted a supplemental New Drug Application to the FDA for the use of dabrafenib in combination with trametinib for the treatment of adults with unresectable or metastatic melanoma with a BRAF V600E or BRAF V600K mutation.20

The addition of these 2 oral agents to the armamentarium of immunotherapies, targeted agents, and chemotherapy for the treatment of advanced melanoma offers hope for improved outcomes.