Chicago, IL—When added to traditional antiplatelet therapy, vorapaxar, an investigational thrombin receptor antagonist, reduced the risk of myocardial infarction (MI), stroke, or cardiovascular (CV) death in patients with established ischemic heart disease or atherothrombotic vascular disease. The results of the secondary prevention Thrombin-Receptor Antagonist in Secondary Prevention of Atherothrombotic Ischemic Events (TRA 2°P TIMI-50) trial were presented by lead investigator David A. Morrow, MD, MPH Associate Professor of Medicine at Harvard Medical School, and Director of the Samuel A. Levine Cardiac Unit in the Division of Cardiovascular Medicine at Brigham and Women’s Hospital, at the 2012 American College of Cardiology meeting.

The patients who took vor apaxar had significantly more bleeding events at 3 years (Table 1). Notably, vorapaxar was stopped after 2 years in patients with a history of stroke, because a higher risk of intracranial hemorrhaging (ICH) was found in patients with a history of stroke in the Thrombin Receptor Antagonist for Clinical Event Reduction in Acute Coronary Syndrome (TRACER) trial. The primary end points of CV death, MI, stroke, hospitalization for ischemia, and urgent revascularization in TRACER were not significantly reduced, but its secondary end point was significantly reduced, and it became the primary end point of TRA 2°P, a maneuver the US Food and Drug Administration calls reactive revision to a protocol.

TRA 2°P TIMI-50, a randomized, double-blind, placebo-controlled, multinational study, followed 26,449 patients for a mean of 2.5 years. Enrollees had previous MI (67%), stroke (19%), or to peripheral arterial disease (PAD; 14%). The patients were randomized to vorapaxar (2.5 mg once daily) or to placebo in addition to standard antiplatelet therapy of aspirin and a thienopyridine in a large proportion of patients.

The risk of bleeding with vorapaxar was greater in patients with a history of stroke or transischemic attack or those who weighed <60 kg. Patients with a prior MI had a significant 20% reduction in CV death, MI, or stroke. In patients with PAD, there was a small trend for a benefit, with a 6% reduction.

A Closer Look at Bleeding, by Subgroups 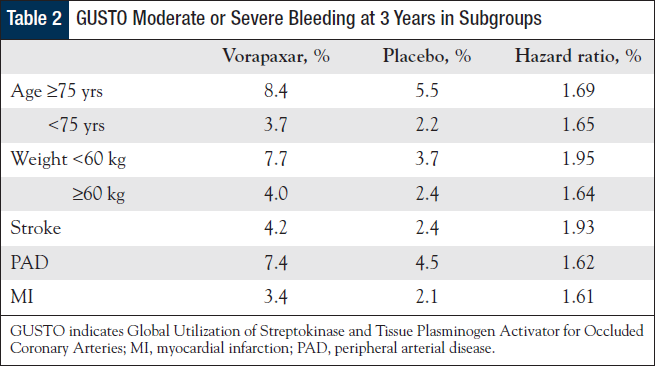 The moderate or severe bleeding rates in the Global Utilization of Streptokinase and Tissue Plasminogen Activator for Occluded Coronary Arteries (GUSTO) trial at 3 years were higher with vorapaxar compared with placebo in patients >75 years, in those with lower weight, and in those with stroke or PAD at baseline (Table 2).

Vorapaxar is the first in a new class of investigational protease-activated receptor-1 antagonists. “This is the first study to show definitively that blocking pathways reduces the risk of suffering another cardiovascular event,” said Dr Morrow. The decrease in MI, stroke, or CV death was offset by the increase in moderate and severe bleeding, including ICH.

Careful patient selection will be necessary to balance the antithrombotic benefit of reduced events against this increased bleeding risk. The optimal patient cohort appears to be patients who were aged <75 years, those who weighed >60 kg, and those who have not had a prior stroke.