Asthma, a condition characterized by the narrowing and inflammation of airways and excess mucus, affects 1 in 12 individuals in the United States—approximately 25 million people, or 8% of the US population.1 Overall, 53% of patients with asthma experience an asthma attack (ie, exacerbation) annually.1

Although asthma therapy, when used according to the current management guidelines, controls the disease in the majority of patients, an estimated 10% of patients have severe asthma, characterized by reduced responsiveness to standard therapy, as well as increased morbidity and reduced quality of life.2,3 Severe asthma exacerbations often lead to hospitalization and can be life-threatening.4 Overall, asthma exacerbations can result in substantial morbidity, mortality, and healthcare utilization and associated costs.5 According to the Centers for Disease Control and Prevention, asthma accounts for an estimated 3630 deaths annually in the United States, and 1.8 million emergency department visits with asthma as the primary diagnosis.6 In addition, there are 439,000 asthma-related hospitalizations annually, with an average length of stay of 3.6 days.6

In the United States, asthma costs accounted for $56 billion annually in 2007, representing a 6% increase from $53 billion in 2002.1 Between 2002 and 2007, the annual per-person cost for patients with asthma was $3300 in medical expenses, missed school or work days, and early mortality.1

The diagnostic tests for asthma may include spirometry or a peak flow meter to measure lung function.7 Other diagnostic tools may include imaging; allergy tests; a nitric oxide test; methacholine response; provocative tests (postphysical activity); or a sputum eosinophils test, which measures the presence of eosinophils in the saliva and sputum.7

The management of asthma includes the recognition and avoidance of disease triggers, ongoing control of symptoms, and, in the event of a flare-up, the use of a quick-relief (rescue) inhaler, such as albuterol.11 Long-term control medications include inhaled corticosteroids, leukotriene modifiers, long-acting beta agonists, combination inhalers, and theophylline.11 Rescue medications include the short-acting beta agonists, the anticholinergic bronchodilator ipratropium, and oral and intravenous (IV) corticosteroids.

For asthma that is worsened by allergies, pharmacotherapy options include immunotherapy (ie, allergy shots) or omalizumab.11 There is a need for additional treatment options for patients with severe asthma and the eosinophilic phenotype.4,11

On November 4, 2015, mepolizumab (Nucala; GlaxoSmithKline), a humanized, interleukin-5 (IL-5) antagonist monoclonal antibody, was approved by the US Food and Drug Administration (FDA) as an add-on subcutaneous maintenance treatment for patients aged ≥12 years with an eosinophilic phenotype who have severe asthma.4,8 Mepolizumab is not indicated for the treatment of other eosinophilic conditions, or for the relief of acute bronchospasm or status asthmaticus.8 Mepolizumab is the first FDA-approved biologic agent that targets IL-5, which regulates the function of eosinophils.12

According to Professor Ian Pavord, University of Oxford, an investigator for a phase 3 clinical trial with mepolizumab, "Severe asthma is a debilitating condition in which patients are at high risk of frequent and serious asthma attacks. Half of all severe asthma patients have at least one urgent care visit per year. As a clinician, the prospect of a treatment that can specifically target the underlying cause of the disease for patients whose condition is driven by eosinophilic inflammation is exciting."11

Mepolizumab controls severe asthma exacerbations by reducing the levels of blood eosinophils that contribute to the pathogenesis of asthma.4 Mepolizumab binds to IL-5 and inhibits IL-5 signaling, thereby reducing the production and survival of eosinophils; however, the exact mechanism of action of mepolizumab in asthma has not been firmly established.8

Mepolizumab injection is available as 100 mg of lyophilized powder in a single-dose glass vial for reconstitution. Mepolizumab 100 mg is administered via subcutaneous injection once every 4 weeks by a healthcare professional into the upper arm, thigh, or abdomen.8

In all 3 studies, mepolizumab was administered every 4 weeks as an add-on treatment to background treatment, with patients continuing their background asthma therapy throughout the duration of the study.8 To be included in the 2 confirmatory clinical trials, patients had to have blood eosinophils levels ≥150 cells/mcL at screening (within 6 weeks of dosing) or blood eosinophils levels ≥300 cells/mcL within 12 months of enrollment (Table 1). 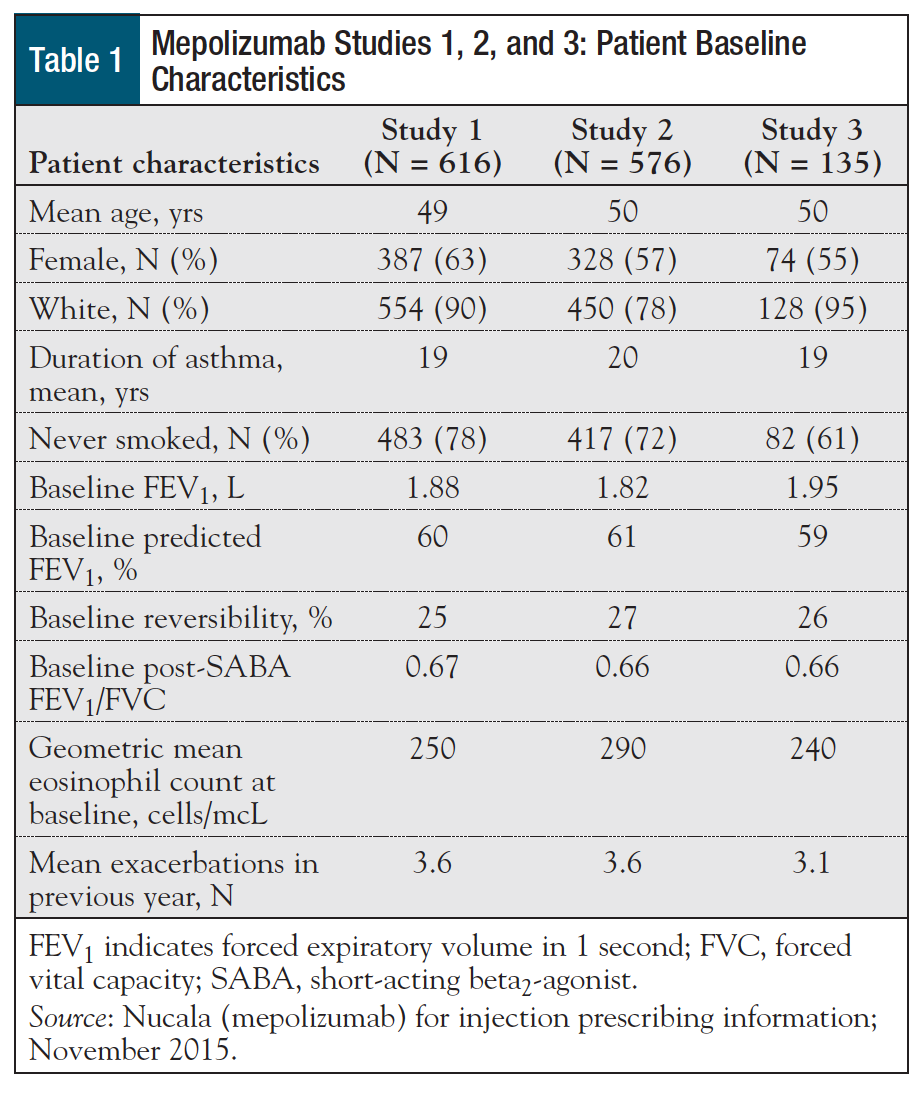 The MENSA study, a 32-week clinical trial, included patients with asthma who had a history of ≥2 exacerbations in the previous year, despite regular treatment with high-dose inhaled corticosteroids plus an additional controller, with or without oral corticosteroids.8,9

Results from Study 1 and 2

The primary end point for Study 1 and 2 was the frequency of exacerbation, defined as the worsening of asthma necessitating the use of an oral or systemic corticosteroid and/or hospitalization and/or emergency department visits.8 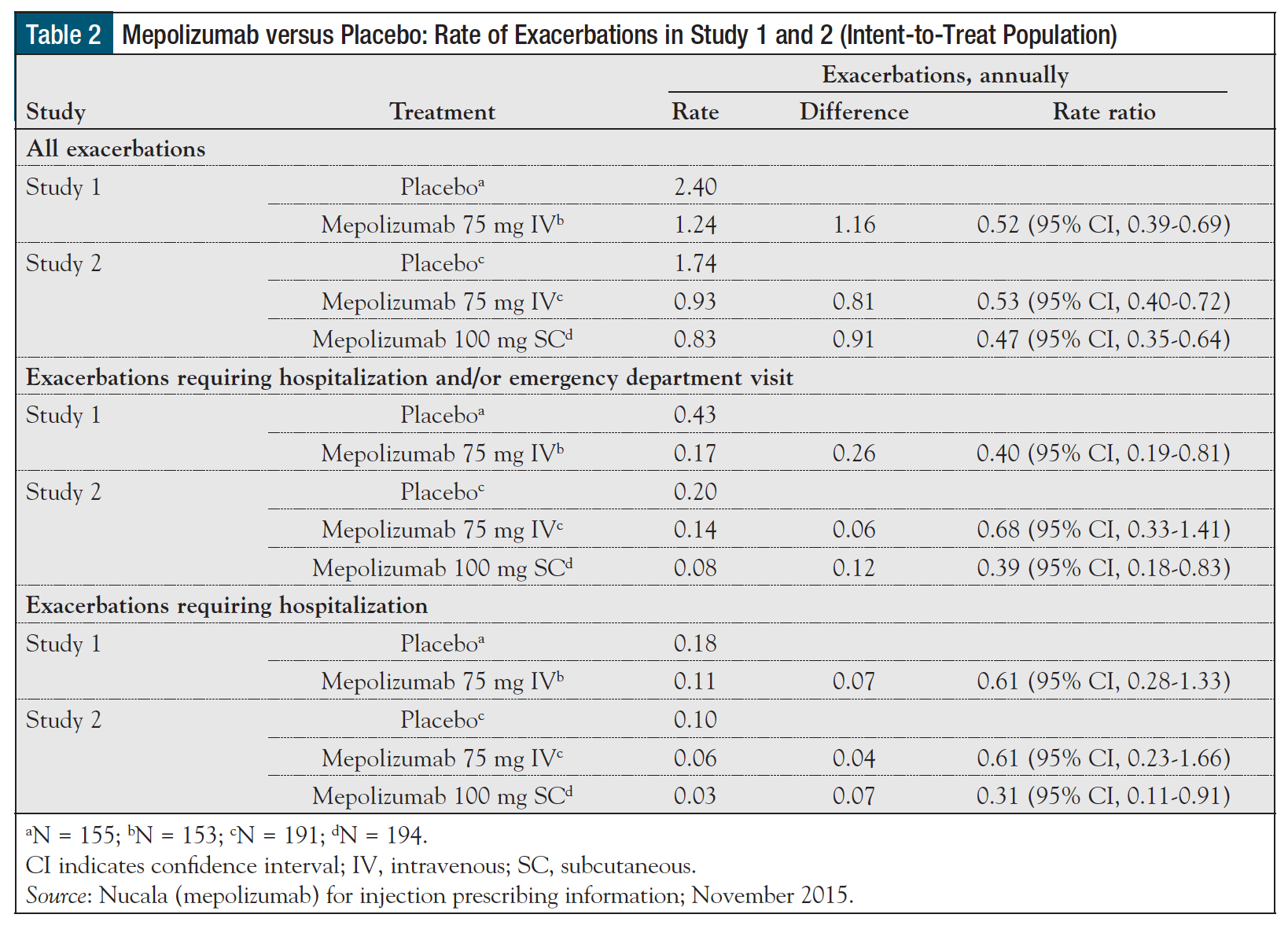 SIRIUS, a 24-week clinical trial, evaluated the effect of mepolizumab on reducing the use of maintenance oral corticosteroids; the primary efficacy outcome was the percent reduction of the oral corticosteroid dose in weeks 20 to 24 compared with the baseline dose, while maintaining asthma control.8

In Study 1, 2, and 3, treatment with mepolizumab did not show consistent improvements in the mean change from baseline in the forced expiratory volume in 1 second (Table 4).8

Mepolizumab is contraindicated in patients with a history of hypersensitivity to mepolizumab or its excipients in the formulation.8

Pediatric use. The safety and efficacy of mepolizumab in patients aged ≤12 years have not been determined.8

Geriatric use. There were insufficient numbers of patients aged ≥65 years in the mepolizumab clinical trials to determine whether their treatment response was different from that of younger patients. The dose selection for elderly patients should start at the low end of the dosing range. Available data suggest that no dosage adjustment is required in geriatric patients, but the potential for increased sensitivity should be considered.8

The FDA approval of mepolizumab marks the availability of the first biologic agent to target IL-5, a cytokine that regulates the growth, activity, and survival of eosinophils—the inflammatory cells that play a key role in the pathogenesis of asthma. Mepolizumab, an IL-5 antagonist monoclonal antibody administered subcutaneously once monthly, is indicated as an add-on maintenance treatment for patients aged ≥12 years with severe asthma, and with an eosinophilic phenotype.