Multiple myeloma, also referred to as myeloma, is a cancer of plasma cells in the bone marrow that often leads to bone destruction and bone marrow failure.1,2 According to the American Cancer Society, more than 26,800 new cases of multiple myeloma will be diagnosed in 2015, and 11,240 deaths will be attributed to this disease.3

Multiple myeloma is the second most common hematologic malignancy after non-Hodgkin lymphoma, representing approximately 1% of all cancer cases.4 Although the overall incidence of myeloma in the United States has increased nearly 1% annually since 1975, the mortality rates associated with this disease have declined during the past 2 decades.1

The treatment of patients with multiple myeloma has evolved substantially in recent years. The introduction of novel drugs with new mechanisms of action, including immune modulators and proteasome inhibitors, as well as a better understanding of the bone marrow microenvironment, have led to new combination therapies and new anticancer drugs.7 In fact, the use of novel agents for first-line treatment of myeloma has improved outcomes, including overall responses, for patients with relapsed or refractory myeloma.7 Nevertheless, despite strides in the treatment of patients with multiple myeloma, there remains a marked need for additional therapeutic options and approaches for this patient population.8

Because patients with multiple myeloma will experience disease relapse after initial treatment, multiple lines of therapy may be required. The therapeutic considerations include the duration of response to previous treatment, as well as the toxicity profiles of specific treatments and patient-specific factors.

On February 23, 2015, the US Food and Drug Administration (FDA) approved panobinostat (Farydak; Novartis Pharmaceuticals), an orally administered inhibitor of histone deacetylase (HDAC), for the treatment of patients with multiple myeloma who have received at least 2 previous regimens, including bortezomib and an immunomodulatory agent.9,10

Panobinostat was approved under the FDA's accelerated approval program, which allows approval of a drug to treat a serious or life-threatening disease based on clinical data showing the drug has an effect on a surrogate end point likely to predict clinical benefit. The FDA approval was based on progression-free survival data. An improvement in survival or in disease-related symptoms has not yet been demonstrated for panobinostat, and confirmatory clinical trials must be conducted to verify and describe the drug's clinical benefit.9

According to Richard Pazdur, MD, Director of the Office of Hematology and Oncology Products in the FDA's Center for Drug Evaluation and Research, "Farydak has a new mechanism of action that distinguishes it from prior drugs approved to treat multiple myeloma, making it a potentially attractive candidate agent. Farydak's approval is particularly important because it has been shown to slow the progression of multiple myeloma."9

Panobinostat's labeling includes a boxed warning to alert patients and healthcare professionals about the risk for severe diarrhea and severe and fatal cardiac events, including cardiac ischemic events, arrhythmias, and electrocardiogram changes associated with the use of panobinostat.10 Consequently, panobinostat was approved with a Risk Evaluation and Mitigation Strategy program, which includes a communication plan to inform and educate healthcare professionals about these risks.9,10

Panobinostat blocks the enzymatic activity of HDACs at nanomolar concentrations. HDACs are responsible for removing acetyl groups from the lysine residues of histones and some nonhistone proteins. HDAC inhibition increases the acetylation of histone proteins, which causes the relaxation of chromatin and leads to transcriptional activation. In vitro, panobinostat-mediated accumulation of acetylated histones and other proteins results in cell-cycle arrest and/or apoptosis of some transformed cells. Overall, panobinostat is more cytotoxic in tumor cells than in normal cells.10

Panobinostat is available as an oral capsule and is administered in combination with bortezomib and dexamethasone. The recommended starting dose of panobinostat is 20 mg once every other day for 3 doses weekly in weeks 1 and 2 of each 21-day cycle for up to 8 cycles. Continued treatment with panobinostat for an additional 8 cycles can be considered for patients with clinical benefit who do not experience unresolved severe or medically significant toxicity. The total treatment duration with panobinostat should not exceed 16 cycles (ie, 48 weeks).10

Panobinostat capsules should be swallowed whole with a cup of water, and can be administered with or without food.10

The efficacy and safety of panobinostat combined with bortezomib and dexamethasone were evaluated in the PANORAMA-1 study, a double-blind, placebo-controlled, phase 3 multicenter clinical trial that enrolled 768 patients with relapsed multiple myeloma who had received 1 to 3 previous lines of therapy.10,11

Patients in PANORAMA-1 were randomized to receive panobinostat in combination with bortezomib and dexamethasone (N = 387; panobinostat arm) or placebo in combination with bortezomib and dexamethasone (N = 381; control arm).10,11 Patients were stratified by previous bortezomib use and by the number of previous lines of therapy. The clinical trial's primary end point was progression-free survival. The secondary end points included overall survival, overall response rate, time to response, and safety.11 The median duration of patient follow-up was 29 months in both study arms.10

The median age of patients with relapsed multiple myeloma who participated in the PANORAMA-1 clinical trial was 63 years (range, 28-84 years).10 The majority of patients were male (53%) and Caucasian (65%) with Eastern Cooperative Oncology Group performance status of 0 to 1 (93%).10 Overall, 57% of patients had undergone stem-cell transplantation.10 Although the median number of previous therapies was 1, 48% of patients received 2 or 3 previous lines of therapy, which included corticosteroids (90%), melphalan (80%), thalidomide (53%), cyclophosphamide (47%), bortezomib (44%), and lenalidomide (19%).10

The FDA approval of panobinostat was based on its efficacy and safety in a prespecified subgroup of 193 patients who received previous treatment with bortezomib and an immunomodulatory agent; overall, 76% of patients in this subgroup received 2 or more previous lines of therapy.10 The benefit-risk ratio associated with the panobinostat-containing regimen was greater in this more heavily pretreated patient subset of patients relative to the overall clinical trial population. 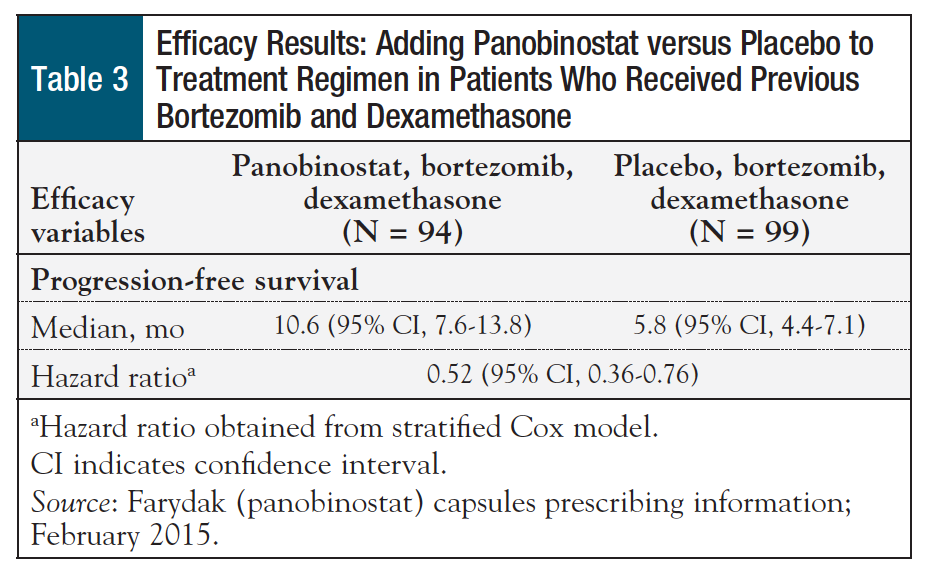 The safety data for the combination of panobinostat with bortezomib and dexamethasone are derived from the PANORAMA-1 clinical trial.10 In this study, the median duration of exposure to panobinostat was 5 months.10 Overall, 60% of patients who received the panobinostat-containing regimen experienced a serious adverse event compared with 42% of patients in the control arm.10

Panobinostat has no contraindications.10

The panobinostat dose should be reduced when coadministered with strong cytochrome (CY) P3A4 inhibitors (eg, ketoconazole).10

The concomitant use of panobinostat with strong CYP3A4 inducers (eg, rifampin), sensitive CYP2D6 substrates (eg, metoprolol, venlafaxine), or antiarrhythmic/QT-prolonging drugs should be avoided.10

Boxed warning. Panobinostat includes a boxed warning regarding severe diarrhea and cardiac events. Panobinostat therapy should be interrupted and restarted at a reduced dose or discontinued if diarrhea is reported. Severe and fatal cardiac ischemic events, severe arrhythmias, and echocardiogram changes have occurred in patients taking panobinostat. An echocardiogram and electrolyte levels should be obtained at baseline and during treatment as clinically indicated.10

Diarrhea. Because diarrhea can occur at any time, hydration status and electrolyte levels should be assessed at baseline and at least weekly during therapy with panobinostat. Treatment should be interrupted if patients report 4 to 6 stools daily.10

Cardiac toxicities. Panobinostat should not be prescribed to patients with a history of recent myocardial infarction or unstable angina. Electrocardiographic abnormalities, including ST-segment depression and T-wave abnormalities, were observed more often in patients receiving panobinostat compared with control patients. An electrocardiogram should be conducted at baseline and periodically during treatment. If QT prolongation occurs and does not resolve, panobinostat therapy should be discontinued.10

Hemorrhage. Serious and fatal hemorrhage have been observed in patients receiving panobinostat. In PANORAMA-1, 5 patients with relapsed multiple myeloma who received panobinostat and 1 patient in the control arm died as a result of a bleeding event.10

Infections. Severe and fatal infections occurred in patients who received panobinostat.10 Panobinostat treatment should not be given to patients with active infections.10

Pregnancy. Women who are pregnant while taking panobinostat should be informed of potential hazards to the fetus.10

Nursing mothers. It is not known whether panobinostat is excreted in human milk.10

Pediatric use. The safety and efficacy of panobinostat in children have not been established.10