Psoriasis, the most prevalent autoimmune disease in the United States, affects approximately 7.5 million people.1 A chronic, relapsing disease, psoriasis is characterized by thick patches of inflamed scaly skin resulting from excessive proliferation of skin cells.1,2 Psoriasis is designated as "moderate" if it involves 3% to 10% of the body surface and "severe" if it involves more than 10% of the body.3 An estimated 25% of psoriasis cases are moderate or severe.4

Plaque psoriasis is the most common form of psoriasis, appearing as raised, red patches covered with a silver or white scaly accumulation of dead skin cells. These patches, which appear most often on the knees, elbows, scalp, and lower back, can be itchy and painful.5

Psoriasis, often misperceived as simply a cosmetic problem, is a major health problem for nearly 60% of those affected.4 Aside from having a profound impact on patients' quality of life and self-esteem, psoriasis can lead to depression, social isolation, and diminished work function and productivity.2

Furthermore, psoriasis is associated with considerable financial burden for patients and for the healthcare system. Results of a systematic review indicate that the total annual US costs attributed to psoriasis were $35.2 billion in 2013, reflecting $12.2 billion in incremental medical costs, $11.8 billion in diminished health-related quality of life, and $11.2 billion in lost productivity.6

Effective management of psoriasis demands ongoing monitoring and treatment. The therapeutic goals for psoriasis include slowing skin growth (to reduce inflammation and plaque formation) and smoothing the skin.2

Psoriasis treatments are used alone or in combination with other therapies.5 Topical treatments for psoriasis include topical corticosteroids, vitamin D analogs, anthralin, topical retinoids, calcineurin inhibitors, salicylic acid, and coal tar.2 Phototherapy with artificial ultraviolet A or B light is sometimes used alone or in combination with medications.

On January 21, 2015, secukinumab (Cosentyx; Novartis), a human IL-17A antagonist, was approved by the US Food and Drug Administration (FDA) for the treatment of adults with moderate-to-severe plaque psoriasis.7 Secukinumab, a biologic immunomodulator drug administered by subcutaneous injection, is indicated for patients who are candidates for systemic therapy or photother­apy or a combination of both therapies.7,8 Secukinumab is the first IL-17A to receive FDA approval for the treatment of patients with moderate-to-severe plaque psoriasis.9

As part of its approval, the FDA required the manufacturer to include a medication guide to inform patients that because secukinumab affects the immune system, it may increase the risk for infection.7

Commenting on this approval, Amy Egan, MD, MPH, the FDA's Deputy Director of the Office of Drug Evaluation III, said, "Plaque psoriasis can cause significant skin irritation and discomfort for patients, so it is important to have a variety of treatment options available to patients."7

Secukinumab for injection is administered via the Sensoready pen or a prefilled syringe. The recommended dose of secukinumab is 300 mg by subcutaneous injection at weeks 0, 1, 2, 3, and 4, followed by 300 mg every 4 weeks. For some patients, a dose of 150 mg may be acceptable.8

Directions for preparing the Sensoready pen and prefilled syringe are included in the drug's prescribing information. The secukinumab lyophilized powder is reconstituted in a vial with sterile water for injection. Reconstitution should be performed by a healthcare provider.8

Elevated levels of IL-17A are found in psoriatic plaques. IL-17A is a naturally occurring cytokine involved in normal inflammatory and immune responses. Secukinumab is a human immunoglobulin G1 monoclonal antibody that selectively binds to the IL-17A cytokine and inhibits its interaction with the IL-17 receptor. Secukinumab in­hibits the release of pro­inflammatory cytokines and chemokines.8

Treatment with secukinumab may reduce epidermal neutrophils and IL-17A levels in psoriatic plaques.8

The safety and effectiveness of secukinumab were evaluated in 4 multicenter, randomized, double-blind, placebo-controlled, phase 3 clinical trials comprising 2403 patients with plaque psoriasis who were candidates for phototherapy or systemic therapy.7,8 Enrolled patients were aged ≥18 years, had plaque psoriasis involving at least 10% of body surface area, and a Psoriasis Area and Severity Index (PASI) score ≥12.8

In the 4 trials, the end points were (1) the proportion of patients whose PASI score was reduced by at least 75% (PASI 75) from baseline to week 12 and (2) treatment success (clear or almost clear) according to the 2011 modified version of the Investigator's Global Assessment.8

Trials 1 and 2: The ERASURE and FIXTURE Studies

The ERASURE study (Trial 1) was a 52-week, randomized, placebo-controlled trial that included 738 patients who received subcutaneous therapy at weeks 0, 1, 2, 3, and 4, followed by dosing every 4 weeks. Patients were randomized to secukin­umab 300-mg or 150-mg doses for the first 4 weeks, followed by the same dose every 4 weeks, or to placebo.8,11

The results of Trials 1 and 2 are shown in Table 1. In both studies, a greater proportion of patients who received secukinumab than those who received placebo or a biologic control met the PASI 75 criterion at week 12.11 At week 12 of Trial 1, a PASI 90 response was achieved in 59% of the secukinumab 300-mg group, 39% of the 150-mg group, and only 1% of the placebo group.8 At the same point in Trial 2, a PASI 90 response was achieved in 54% and 42% of the secukinumab groups versus 2% of the placebo group.8 The investigators concluded that the effectiveness of secukinumab in these trials validated IL-17A as a therapeutic target.11

At week 12 in both trials, improvements (vs placebo) in the signs and symptoms of itching, pain, and scaling were reported in the 39% of patients who participated in self-reported assessments.8

Trials 3 and 4: The FEATURE and JUNCTURE Studies

The FEATURE study (Trial 3) included 177 patients randomized in a 1:1:1 manner to secukinumab 300 mg, secukinumab 150 mg, or to placebo. In this study, treatment was self-administered via a prefilled syringe once weekly to week 4, followed by the same dose every 4 weeks for up to 12 weeks.8,12

In the JUNCTURE study (Trial 4), 182 patients were randomized to receive secukinumab 300 mg, secukinumab 150 mg, or placebo. Treatment was self-administered via the Sensoready pen once weekly to week 4, followed by the same dose every 4 weeks for up to 12 weeks.8,13

The results of Trials 3 and 4 are shown in Table 2. In both studies, secukinumab 300 mg and 150 mg were superior to placebo at week 12.8,12,13 The PASI 90 responses at week 12 were similar to those in Trials 1 and 2.8 Moreover, the secukinumab prefilled syringe (Trial 1) and Sensoready/autoinjector pen (Trial 2) were associated with high usability.12,13

The rates of adverse reactions reported by >1% of patients with plaque psoriasis through week 12 in the 4 primary clinical trials are shown in Table 3.8 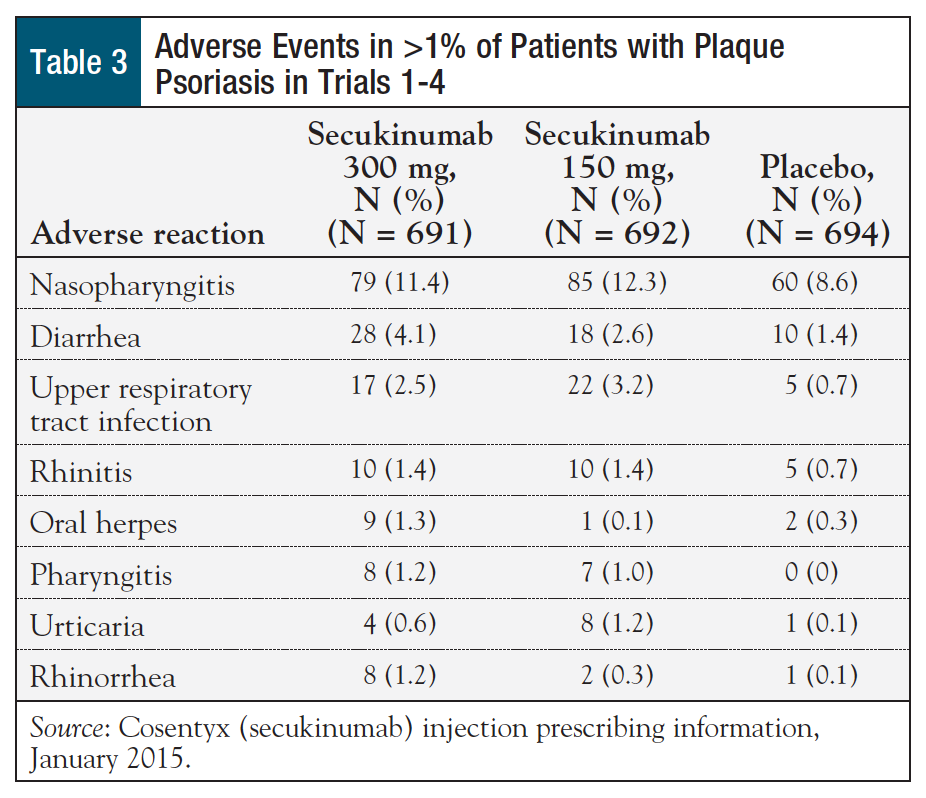 Secukinumab treatment is contraindicated in individuals who have had a serious hypersensitivity reaction to secukinumab or to any of its excipients.8

Nonlive vaccines. Patients using secukinumab may receive nonlive vaccinations. The clinical effectiveness of meningococcal and influenza vaccines has not been assessed with secukinumab.8

Hypersensitivity reactions. If an anaphylactic reaction or other serious allergic reaction occurs, secukinumab should be discontinued immediately and appropriate therapy initiated.8

Pregnancy. There are no adequate well-controlled trials of secukinumab in pregnant women. Secukinumab should only be used during pregnancy if the potential benefit justifies the potential risk to the fetus.8

Nursing mothers. It is not known whether secukinumab is excreted in human milk or absorbed systemically after ingestion. Caution should be exercised when secukinumab is administered to a nursing woman.8

Pediatric use. Secukinumab has not been evaluated in pediatric patients.8

Geriatric use. Although no response differences were seen between older and younger patients who received secukinumab, the number of patients aged ≥65 years was not sufficient to determine potential differences.8