Heart failure occurs when the heart cannot pump sufficient blood and oxygen.2 Many patients with heart failure have a reduced left-ventricular ejection fraction (LVEF), also referred to as systolic heart failure.3 A reduced LVEF indicates that the heart muscle does not contract effectively, and less oxygen-rich blood is pumped out to the body.4 An elevated heart rate is associated with an increased mortality risk, cardiovascular (CV) mortality, and hospital admissions, particularly in patients with coronary artery disease (CAD) and left-ventricular dysfunction. Conversely, a reduced heart rate is associated with improved outcomes.5

The symptoms of heart failure include dyspnea, fatigue, edema, congestion and/or persistent cough, and a rapid or irregular heartbeat.2,3 The majority of patients with heart failure have symptoms caused by impaired left-ventricular myocardial function.3 The New York Heart Association (NYHA) Functional Classification system categorizes heart failure into 4 classes (I through IV) based on the severity of symptoms, ranging from mild (class I) to severe (class IV).6

Associated with a high rate of morbidity and mortality, heart failure caused 1 in 9 deaths in 2009.7 Approximately 50% of patients with heart failure die within 5 years of diagnosis.7 In addition to its poor prognosis and comorbid conditions, heart failure is associated with serious complications, including kidney damage or failure, arrhythmia, heart valve problems, and liver damage.2 Overall, heart failure imposes a profound clinical and economic burden.8

On April 15, 2015, the US Food and Drug Administration (FDA) approved ivabradine (Corlanor; Amgen) to reduce the risk for hospitalization for worsening heart failure in patients with stable, symptomatic chronic heart failure with LVEF ≤35%, who are in sinus rhythm with a resting heart rate of ≥70 beats per minute (bpm) and are taking maximally tolerated doses of beta-blockers or have a contraindication to beta-blockers.12,13 Ivabradine, an oral agent, is a hyperpolarization-activated cyclic nucleotide-gated (HCN) channel blocker.12 Ivabradine is a first-in-class HCN channel blocker, and the first chronic heart failure medication to be approved by the FDA in nearly a decade.13,14

Ivabradine was granted a priority review and a fast-track review by the FDA, based on its potential to treat a life-threatening condition and fill an unmet medical need.13

Norman Stockbridge, MD, PhD, Director of the FDA's Division of Cardiovascular and Renal Products, said, "Heart failure is a leading cause of death and disability in adults. Corlanor is thought to work by decreasing heart rate and represents the first approved product in this drug class."13

Jeffrey S. Borer, MD, Professor of Medicine, Cell Biology, Radiology and Surgery, and chief of Cardiovascular Medicine at State University of New York, Downstate Medical Center, commented, "The approval of Corlanor is an important step forward for the treatment of patients with chronic heart failure in the U.S. Because its mechanism of action is unique, it will complement the use of standard heart failure therapies, including beta-blockers."14

Ivabradine blocks the HCN channel that is responsible for the cardiac pacemaker, which regulates the heart rate.12 Ivabradine reduces the spontaneous pacemaker activity of the sinoatrial (cardiac sinus) node by selectively inhibiting the If current to slow the heart rate, with no effect on ventricular repolarization and no effect on myocardial contractility.12

Ivabradine is prescribed with a patient medication guide about its use and safety information.13

The SHIFT study was a randomized, double-blind clinical trial comparing ivabradine versus placebo in 6558 adults (mean age, 61 years) with stable NYHA class II to IV heart failure, LVEF ≤35%, and a resting heart rate ≥70 bpm.5,12 The primary end point was a composite of the first hospitalization for worsening heart failure or for CV death. The median follow-up was 22.9 months.5,12

The results demonstrated that ivabradine reduced the risk for the combined end point of hospitalization for worsening heart failure and CV death based on a time-to-event analysis (Table).12 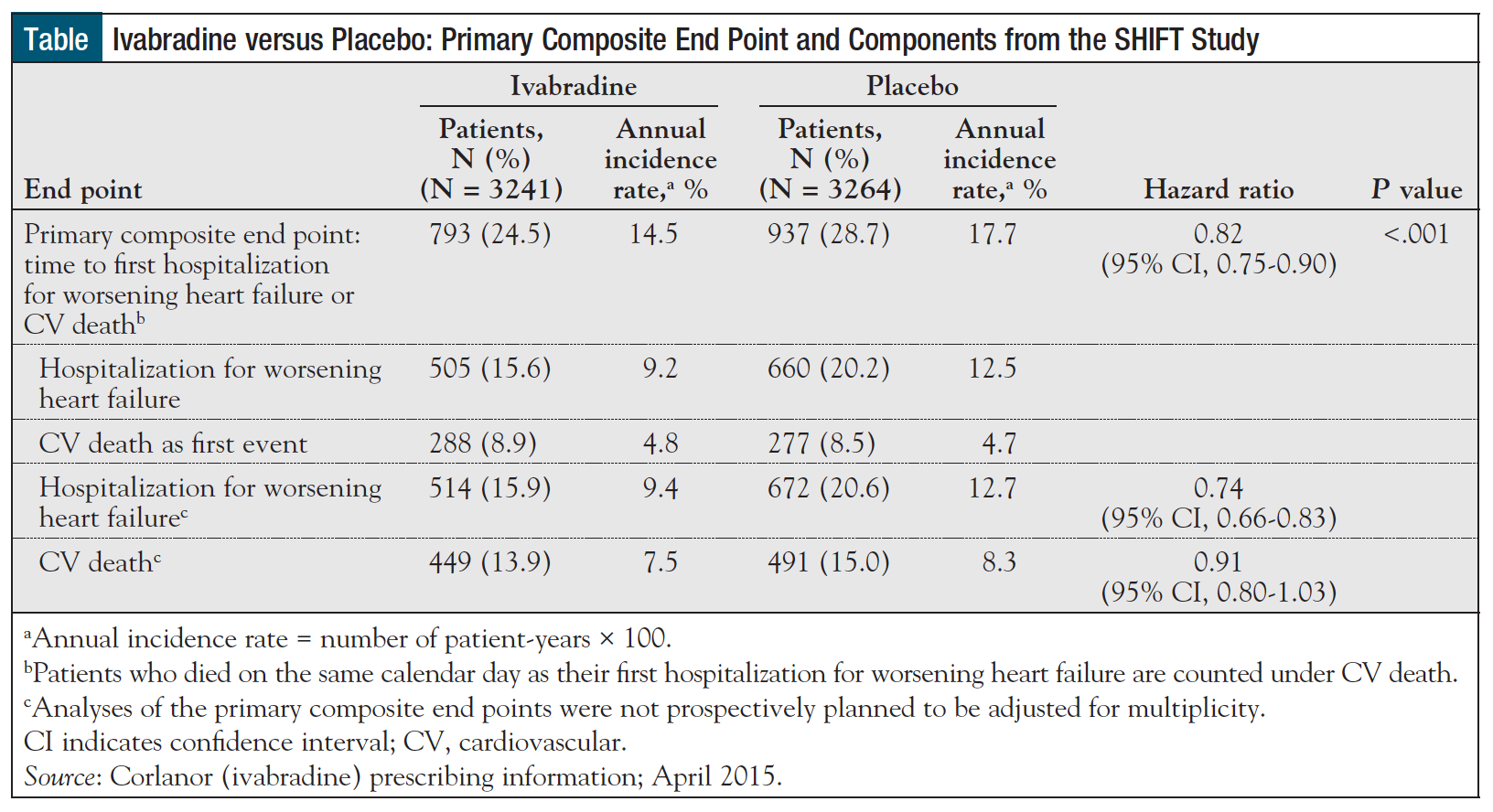 The treatment effect reflected only a reduction in the risk for hospitalization for worsening heart failure but did not reduce the mortality rate: ivabradine did not have significant benefit on CV death.12 Patients who received ivabradine had an average reduction of 15 bpm in heart rate from a baseline value of 80 bpm.5

The SHIFT study investigators concluded that the findings "support the importance of heart-rate reduction with ivabradine for improvement of clinical outcomes in heart failure and confirm the important role of heart rate in the pathophysiology of heart failure."5

The BEAUTIFUL study was a randomized, double-blind, placebo-controlled clinical trial of 10,917 patients with CAD, impaired left-ventricular systolic function (ejection fraction <40%), and a resting heart rate ≥60 bpm.12,15 Patients had stable symptoms of heart failure and/or angina for at least 3 months, and they received conventional CV medications at stable doses for at least 1 month.12 Patients were randomized in a 1:1 ratio to receive ivabradine or placebo at an initial dose of 5 mg twice daily with the dose increased to 7.5 mg twice daily, depending on the patient's resting heart rate and tolerability.12,15

The SIGNIFY study was a randomized, double-blind clinical trial of 19,102 adults with stable CAD, but without clinically evident heart failure (NYHA class I).12,16 Beta-blocker therapy was not required. The initial dose of ivabradine was 7.5 mg twice daily, and the dose could be increased up to 10 mg twice daily or downtitrated to 5.0 mg twice daily to achieve a target heart rate of 55 bpm to 60 bpm.12

The primary end point of this study was a composite of the first occurrence of CV death or myocardial infarction. At a median follow-up of 24.1 months, ivabradine did not significantly affect the primary composite end point (HR, 1.08; 95% CI, 0.96-1.20).12,16

The most common adverse reactions occurring in ≥1% of patients who received ivabradine included bradycardia (10%), hypertension (8.9%), atrial fibrillation (8.3%), and luminous phenomena (2.8%).5,12 The most common adverse events leading to the discontinuation of ivabradine treatment in the SHIFT clinical trial included atrial fibrillation (4%) and heart failure (2%).5

Pacemakers. Ivabradine dosing is based on heart rate reduction, targeting a heart rate of 50 bpm to 60 bpm. Ivabradine is not recommended in patients with demand pacemakers set to rates ≥60 bpm.12

Fetal toxicity. Ivabradine may cause fetal toxicity when administered to a pregnant woman, based on findings in animal studies.12

Bradycardia and conduction disturbances. Bradycardia, sinus arrest, and heart block have occurred with ivabradine therapy.12 The concurrent use of verapamil or diltiazem will increase ivabradine exposure, may contribute to heart-rate lowering, and should be avoided. Ivabradine should not be used in patients with second-degree atrioventricular block, unless a functioning demand pacemaker is present.12

Pregnancy. Ivabradine may cause fetal harm when administered to a pregnant woman.12

Lactation. Because of the potential risk to breast-fed infants from exposure to ivabradine, breast-feeding is not recommended in patients receiving ivabradine.12

Pediatric use. The safety and effectiveness of ivabradine in pediatric patients have not been established.12