In light of its pervasive effects on all areas of personal functioning, the World Health Organization considers schizophrenia one of the most disabling and economically catastrophic medical disorders.2 The mortality rate among patients with schizophrenia is high; suicide, violent deaths, and a wide range of health problems (eg, cigarette smoking, obesity, diabetes) contribute to the increased mortality rate.3 Based on health insurance claims data in 2002, the cost of schizophrenia in the United States was estimated at a staggering $63 billion; this included $23 billion in direct healthcare costs (eg, medications, hospitalization), $32 billion in indirect costs (eg, unemployment, reduced work productivity), and nearly $8 million in total direct nonhealthcare costs (eg, law enforcement, homeless shelters).4

Because the etiology of schizophrenia is unknown, the goals of treatment are to eliminate disease-related symptoms and to enhance functioning.1 The cornerstone of current treatment for schizophrenia is antipsychotic medications, which are available in several forms, including a pill, a liquid, a short-acting injection, or a long-acting injection.1 After patients have found an effective medication, psychosocial treatment focuses on education and coping skills to prevent relapses and hospitalization.1

Given the challenges with patient adherence to oral regimens and that relapse leads to serious medical and psychosocial consequences, the future of schizophrenia pharmacotherapy is likely to include improved long-term delivery systems, including intranasal formulations, transdermal patches, subcutaneous implants, and pumps.10

The approval of aripiprazole lauroxil was based on the results of an international, placebo-controlled, phase 3 clinical trial, with >600 patients with schizophrenia. This study demonstrated that aripiprazole lauroxil offers superior symptom palliation compared with placebo.11,12,14 According to Mitchell Mathis, MD, Director of the FDA's Division of Psychiatry Products, "Long-acting medications to treat schizophrenia can improve the lives of patients. Having a variety of treatment options and dosage forms available for patients with mental illness is important so that a treatment plan can be tailored to meet the patient's needs."11

After the patient is stabilized with oral aripiprazole, a dosing conversation is recommended (Table 1). Oral ari-piprazole should be given in conjunction with the first injection of aripiprazole lauroxil for 21 consecutive days.12

The efficacy of aripiprazole lauroxil was assessed using the Positive and Negative Syndrome Scale (PANSS) and the Clinical Global Impression (CGI) improvement scale.12 PANSS is a 30-item scale that measures the positive and negative symptoms of schizophrenia (14 items) and general psychopathology (16 items). Each item is rated on a scale of 1 (absent) to 7 (extreme), such that the PANSS scores range from 30 to 210.12,14 The CGI improvement scale rates improvement in mental illness on a scale of 1 (very much improved) to 7 (very much worse).12,14

Patients ranged in age from 18 to 70 years, and their PANSS total scores ranged from 70 to 120.12 The patients' PANSS scores were ≥4 for 2 or more of the selected positive scale items. Patients also had to have a CGI severity scale score of ≥4 at baseline.12

The primary efficacy variable was the change from baseline to day 85 in the PANSS total score.12 Significant changes in the PANSS total score were seen with the 2 doses of aripiprazole lauroxil compared with placebo (Table 2).12,14 At day 85, both aripiprazole lauroxil treatment groups also demonstrated superior CGI improvement scores compared with placebo.12 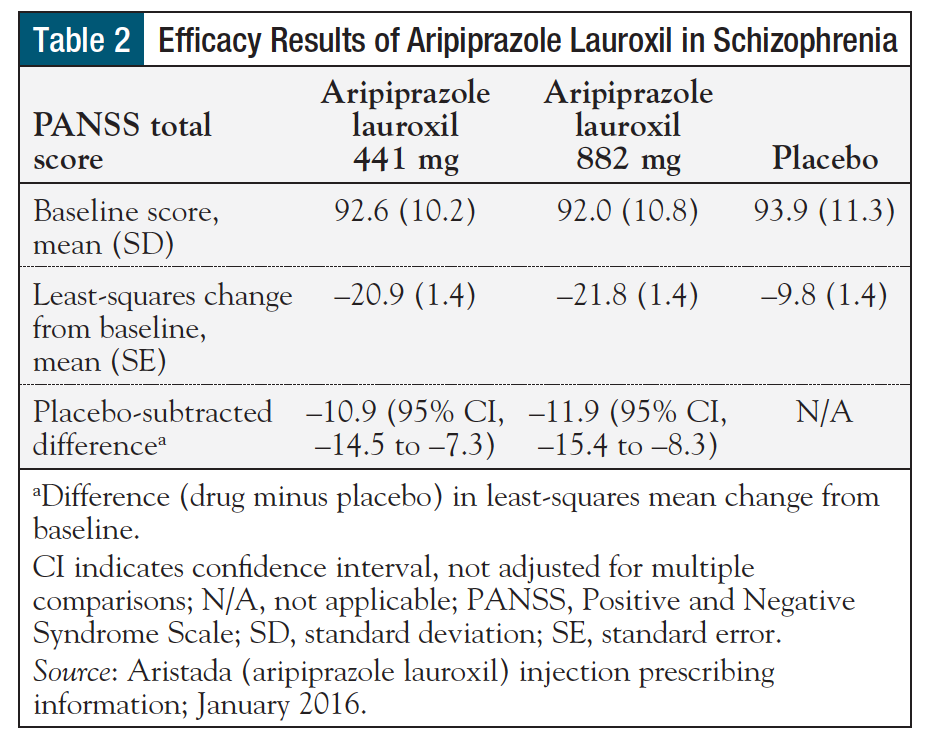 Boxed warning. Aripiprazole lauroxil was approved with a boxed warning stating that elderly patients with dementia-related psychosis who receive antipsychotic drugs are at an increased risk for death, and that aripiprazole lauroxil is not approved for the treatment of patients with dementia-related psychosis.12

Neuroleptic malignant syndrome (NMS). NMS is a potentially fatal symptom complex that is associated with antipsychotic drugs, including aripiprazole lauroxil. The management of NMS includes immediate discontinuation of antipsychotic drugs and other drugs that are not essential to concurrent therapy, as well as intensive treatment and medical monitoring. Patients who require antipsychotic agents after recovering from NMS should be closely monitored.12

Metabolic changes. Atypical antipsychotic drugs are associated with metabolic changes, including hyperglycemia, diabetes mellitus, dyslipidemia, and weight gain. In a long-term, open-label study of aripiprazole lauroxil in patients with schizophrenia, 14% of patients with normal glycated hemoglobin (Hb) A1c levels at baseline developed elevated HbA1c levels during the study period. Shifts in the baseline fasting total cholesterol levels from normal to high (≥240 mg/dL) were reported in 1% of patients.12 In the pivotal 12-week clinical trial, 10% of patients taking aripiprazole lauroxil 441 mg had a weight gain ≥7% of body weight, as well as 9% of those taking aripiprazole lauroxil 882 mg.12

Leukopenia, neutropenia, agranulocytosis. Patients with a history of leukopenia or neutropenia should have frequent complete blood counts for the first few months of therapy. Aripiprazole lauroxil should be discontinued if severe neutropenia occurs.12

Seizures. Aripiprazole lauroxil should be used with caution in patients with a history of seizures, or with conditions that lower the seizure threshold.12

Potential for cognitive and motor impairment. Similar to other antipsychotics, the use of aripiprazole lauroxil can impair judgment, thinking, and motor skills.12

Body temperature regulation. Appropriate monitoring is recommended when aripiprazole lauroxil is prescribed to patients with conditions that can contribute to an elevation in the core body temperature.12

Dysphagia. Aripiprazole lauroxil should be used with caution in patients at risk for aspiration pneumonia.12

Pregnancy. Published data regarding the use of aripiprazole in pregnant women are not sufficient to determine the risk for birth defects or for miscarriage.12 Extrapyramidal symptoms and withdrawal symptoms have been observed in neonates who were exposed to antipsychotic drugs during the third trimester of pregnancy.12

Pediatric use. There are no data to establish the safety of aripiprazole lauroxil in pediatric patients.12

Geriatric use. There are no data to establish the safety of aripiprazole lauroxil in patients aged >65 years.12