Glyxambi (Empagliflozin/Linagliptin): A Dual- Acting Oral Medication Approved for the Treatment of Patients with Type 2 Diabetes

Type 2 diabetes, which accounts for the large majority of new diagnoses of diabetes, is a leading cause of morbidity, including cardiovascular disease, blindness, renal failure, amputations, and hospitalizations.1,2 Type 2 diabetes is also associated with an increased risk for cancer, psychiatric illness, cognitive decline, chronic liver disease, arthritis, and other disabling conditions.2

Type 2 diabetes is a disorder in which the cells in the muscles, liver, and fat tissue are unable to use insulin effectively.1 As the body’s need for insulin increases, the beta cells in the pancreas lose their ability to produce sufficient quantities of the hormone. The relative role of insulin resistance compared with beta-cell dysfunction varies; some individuals are primarily insulin resistant, and others use insulin effectively but have low insulin secretion.1 The risk for type 2 diabetes increases with older age, obesity, family history of diabetes, history of gestational diabetes, impaired glucose metabolism, and physical inactivity.1

The prevalence and the incidence of type 2 diabetes continue to escalate worldwide, resulting in a significant economic burden for healthcare systems.2 The American Diabetes Association (ADA) estimates that the total (direct and indirect) cost of diabetes in the United States was $245 billion in 2012; the direct medical costs were $176 billion, and the indirect costs, including disability, work loss, and premature death, totaled approximately $69 billion.3

The treatment goals for patients with type 2 diabetes include the elimination of symptoms and the prevention of complications. Dietary and exercise modifications, as well as patient education, remain the cornerstones of initial treatment of patients with type 2 diabetes.2 Antidiabetic medications are considered when these interventions are insufficient to maintain near-normal blood glucose levels and the patient’s target hemoglobin (Hb) A1c level.2

In recent years, glycemic management of patients with type 2 diabetes has become increasingly complex and even controversial.2 New pharmacologic agents for type 2 diabetes have been introduced at a rapid rate, each with potential adverse effects. In addition, the benefits of intensive glucose control in preventing macrovascular complications remain uncertain. According to a joint position statement issued by the ADA and the European Association for the Study of Diabetes, metformin monotherapy represents the standard treatment for patients with diabetes at diagnosis, unless explicitly contraindicated.2 If a patient’s HbA1c target level is not reached after approximately 3 months, one of several drugs can be combined with metformin.2

Typically, the choice of treatment should be made on the basis of patient and medication characteristics, with the primary goal of improving glycemic control and minimizing the side effects.2

On February 2, 2015, the US Food and Drug Administration (FDA) approved empagliflozin plus linagliptin (Glyxambi; Boehringer Ingelheim/Eli Lilly) tablets as an adjunct to diet and exercise to improve glycemic control in adults with type 2 diabetes when treatment with empagliflozin and linagliptin is appropriate.4 This fixed-dose combination contains 10 mg or 25 mg of empagliflozin and 5 mg of linagliptin, combining the properties of an SGLT2 and a DPP-4 in a single tablet.5

“Both of these classes of medications are safe and effective to lower the blood glucose, each through a different mechanism of action,” said J. Michael Gonzalez-­Campoy, MD, PhD, FACE, Medical Director and Chief Executive Officer of the Minnesota Center for Obesity, Metabolism and Endocrinology. “Any time combination therapy is used, it is superior to monotherapy. Whenever two medications are combined into 1 pill, adherence improves, and usually the cost decreases.”6

Empagliflozin plus linagliptin therapy combines 2 medications with complementary mechanisms of action; empagliflozin is an SGLT2 inhibitor, and linagliptin is a DPP-4 inhibitor.5 SGLT2 is a protein that facilitates the reabsorption of glucose from the kidney into the blood. By inhibiting SGLT2, empagliflozin lowers blood glucose levels and increases glucose excretion.5 DPP-4 is an enzyme that cleaves GLP-1 and glucose-dependent insulinotropic polypeptide, 2 intestinal hormones that regulate the postprandial production of insulin and glucagon by the pancreas.5

As an inhibitor of DPP-4, linagliptin increases the concentrations of these incretin hormones, which stimulates the release of insulin in a glucose-dependent manner and decreases glucagon levels in the blood. GLP-1 also reduces glucagon secretion from the pancreas, which results in lowered glucose production by the liver.5 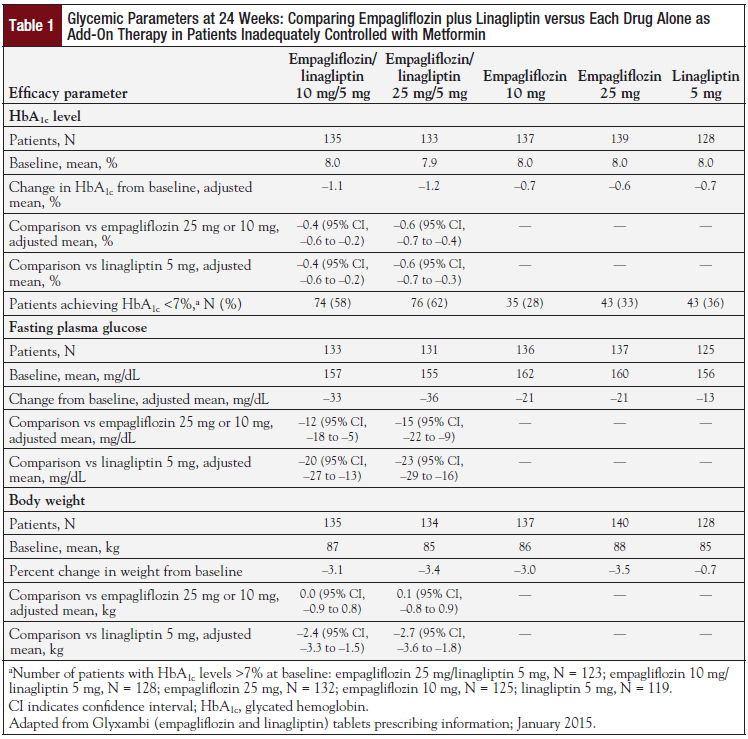 The safety of empagliflozin plus linagliptin (empagliflozin 10 or 25 mg/linagliptin 5 mg) was evaluated in 1363 patients with type 2 diabetes who received treatment for a maximum of 52 weeks in active-controlled clinical trials.5 Based on pooled analyses of these studies, the most common adverse reactions associated with empagliflozin plus linagliptin therapy included urinary tract infection (a predefined adverse event grouping that also includes asymptomatic bacteriuria and cystitis), nasopharyngitis, and upper respiratory tract infection.5 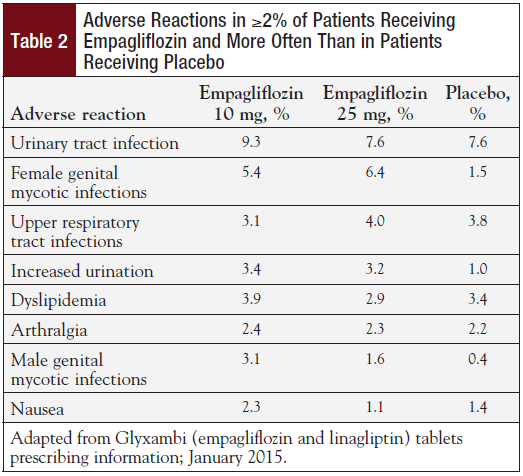 Hypoglycemia was reported among patients taking empagliflozin plus linagliptin during a period of 52 weeks (Table 4).5 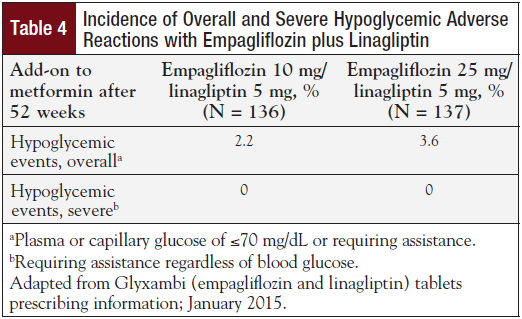 Hypotension. Because empagliflozin causes intravascular volume contraction, symptomatic hypotension can occur, particularly in patients with renal impairment, with low systolic blood pressure, in elderly patients, and in patients taking diuretic agents. Before starting empagliflozin plus linagliptin therapy, the volume status should be assessed and corrected as needed. Patients should be monitored for the signs and symptoms of hypotension, particularly in clinical situations in which volume contraction is expected.5

If a serious hypersensitivity reaction is suspected, empagliflozin plus linagliptin therapy should be discontinued and alternative treatment for diabetes should be started.5 Because angioedema has been reported with other DPP-4 inhibitors, caution should be taken when considering empagliflozin plus linagliptin for patients who have experienced angioedema after taking another DPP-4 inhibitor.5

Increased low-density lipoprotein cholesterol (LDL-C) levels.Increases in LDL-C levels can occur with empagliflozin. Lipid levels should be monitored and treated as needed.5

Macrovascular outcomes. No clinical studies have demonstrated conclusive evidence of the reduction in macrovascular risk with empagliflozin plus linagliptin therapy or with any other antidiabetic drug.5

Pregnancy. Empagliflozin plus linagliptin combination has been assigned pregnancy category C; there are no adequate and well-controlled studies with this drug in pregnant women. This combination should only be used during pregnancy if the potential benefit outweighs the potential risk to the fetus.5

Pediatric use.The safety and efficacy of empagliflozin plus linagliptin have not been established in pediatric patients aged <18 years.5

Control of glucose and HbA1c levels is key to preventing complications of diabetes. Some experts have suggested that reaching and maintaining glucose control early in patients with type 2 diabetes may result in benefits that persist beyond the treatment period.10 Empagliflozin plus linagliptin, a dual-acting oral tablet, has demonstrated superior efficacy and acceptable safety in a large phase 3 clinical trial of patients with poorly controlled type 2 diabetes compared with patients who received empagliflozin or linagliptin monotherapy. For patients whose type 2 diabetes is inadequately controlled with high-dose metformin, this novel combination drug, with a combined mechanism of action, may enhance drug adherence and glycemic control.