Chronic lymphocytic leukemia (CLL), a cancer of B-cell lymphocytes, is the most common type of leukemia in Western adult patients.1 According to the Leukemia and Lymphoma Society, more than 15,600 Americans were diagnosed with CLL in 2013.2

CLL is a disease of the elderly.3 The incidence of CLL increases significantly among individuals aged ≥50 years, with only a small fraction of patients diagnosed in their 30s and 40s.2 The majority of patients with CLL are diagnosed without symptoms, and typically learn that they have CLL after routine blood work.4 As it advances, CLL can cause severe fatigue, swollen lymph nodes, enlarged spleen, shortness of breath, ­and infections.4

The cost burden associated with CLL is significant. Based on a recent cost analysis conducted in Germany, the total per-patient costs for patients with CLL is €9753 (approximately $12,202) annually compared with €4807 (approximately $6014) annually for individuals in a control group of the same age and sex.6 In this study, the economic burden of CLL was primarily driven by inpatient costs and by drug costs. From a societal perspective, productivity loss was the highest cost associated with a CLL diagnosis.6

According to the World Health Organization, CLL and small lymphocytic lymphoma (SLL) are different clinical manifestations of the same disease.7 The term CLL is used when there is a leukemic component in peripheral blood, whereas SLL is used when lymph nodes or other tissues are infiltrated by CLL cells that appear to be without the leukemic component.2,7 Only 5% of patients present with clinical features of SLL.2. CLL and SLL affect people of the same age-groups, have common signs and symptoms, and are generally slow-growing conditions.8 The treatment for both malignancies is also similar.8

Follicular lymphoma is the second most common subtype of non-Hodgkin lymphoma (NHL), comprising approximately 20% of all NHL cases.8 Follicular lymphoma is characterized by a translocation between chromosome 14 and chromosome 18, which causes the overexpression of BCL-2 and increased resistance to treatment.8 Although an indolent NHL, follicular lymphoma can transform into an aggressive phenotype, at which point it should be managed using therapies that are appropriate for aggressive forms of NHL, including combinations of chemotherapy and anti-CD20 monoclonal antibodies.9

In the past several years, major advances have been made in understanding the pathophysiology of CLL, including biologic factors that influence its clinical course. As a result, treatment approaches have evolved to target the underlying disease pathology.3

Medications that can be used for the treatment of patients with relapsed and/or refractory CLL include alemtuzumab, bendamustine, chlorambucil, fludarabine, ibrutinib, lenalidomide, obinutuzumab (in combination with chlorambucil), ofatumumab, and rituximab.12 Several of these are new therapies that were approved in 2013 and 2014 for use in patients with previously untreated CLL and in relapsed or refractory CLL; these include ibrutinib, obinutuzumab, and ofatumumab.13-15

On July 23, 2014, the US Food and Drug Ad­­ministration (FDA) approved idelalisib (Zydelig; Gilead Sciences), an oral phosphatidylinositol 3-kinase delta (PI3Kδ) inhibitor, for the treatment of 3 types of hematologic malignancies, including patients with relapsed CLL, to be used in combination with rituximab when rituximab can be used alone because of the presence of comorbidities, as well as patients with relapsed follicular lymphoma or patients with relapsed SLL after 2 previous systemic therapies.16

The FDA approved idelalisib for the treatment of CLL under the prescheduled review process, and used its accelerated approval program to approve the indications for the treatment of patients with relapsed follicular lymphoma and for patients with relapsed SLL, based on the surrogate end points of tumor response rate and duration of response. An improvement in survival or disease-related symptoms has not been established for idelalisib in these 2 malignancies.16

Idelalisib was approved with a Risk Evaluation and Mitigation Strategy program to ensure that healthcare providers who prescribe idelalisib are informed of the risk for fatal and serious toxicities associated with idelalisib.16

Idelalisib is a potent and selective inhibitor of the PI3Kδ, an enzyme that is expressed in normal and malignant B-cells.17,18 Idelalisib inhibits several cell-signaling pathways, including B-cell receptor signaling and CXCR4 and CXCR5 signaling, which are involved in trafficking and homing of B-cells to the lymph nodes and to the bone marrow.18

In cell lines derived from malignant B-cells and in primary tumor cells, idelalisib induced apoptosis and inhibited proliferation. Inhibition of chemotaxis and adhesion, and reduced cell viability have been observed in lymphoma cells that were treated with idelalisib.18

The recommended dosage of idela­lisib for all 3 indications is 150 mg administered orally twice daily. Idelalisib tablets can be taken with or without food and should be swallowed whole.18

Treatment with idelalisib should be continued until disease progression or unacceptable toxicity. The optimal and safe dosing regimen for patients who take idelalisib for more than several months is unknown.18

The approval of idelalisib in combination with rituximab for the treatment of patients with relapsed CLL was based on Study 116, a randomized, double-blind, placebo-controlled phase 3 clinical trial.17 This clinical trial enrolled 220 patients with relapsed CLL who required treatment and were unable to tolerate standard chemoimmunotherapy as a result of coexisting medical conditions, reduced renal function, or significant neutropenia or thrombocytopenia resulting from previous therapy with cytotoxic agents.17,18

Patients received idelalisib plus rituximab or placebo plus rituximab until disease progression or unacceptable toxicity. Idelalisib was administered orally at 150 mg twice daily.17,18 Patients in both arms received 8 doses of rituximab (first dose, 375 mg/m2; subsequent doses, 500 mg/m2 every 2 weeks for 4 infusions, and every 4 weeks for 4 infusions). The median duration of exposure to idelalisib was 5 months.17,18

The primary end point was progression-free survival (PFS), which was defined as the interval from randomization to disease progression or death from any cause (whichever came first), using the Kaplan-Meier method.17 The primary end point was assessed by an Independent Review Committee. The secondary end points included overall response rate (ORR) and complete response rates, lymph-node response, and OS. Study 116 was stopped for efficacy following the first prespecified interim analysis.17,18

Patients in both arms had received a median of 3 previous therapies, including regimens containing rituximab, fludarabine, cyclophosphamide, and bendamustine.17,18 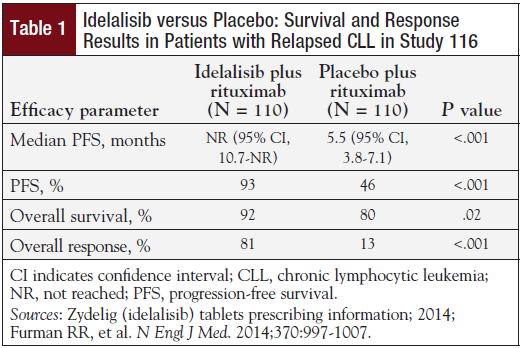 Patient population. The patients’ median age was 62 years.18,19 The majority of the patients were male (54%), Caucasian (90%), and had a baseline Eastern Cooperative Oncology Group (ECOG) performance status of 0 or 1 (92%). The patients’ median time since diagnosis was 4.7 years. The patients had received at least 2 previous treatments and experienced disease relapse within 6 months after treatment with rituximab and an alkylating agent. The median number of previous treatments was 4 (range, 2-12) and included rituximab plus cyclophosphamide, doxorubicin, vincristine, and prednisone (R-CHOP); bendamustine and rituximab; and rituximab plus cyclophosphamide, vincristine, and prednisone. At baseline, 33% of patients had extra­nodal disease, and 26% of patients had bone marrow involvement.18,19 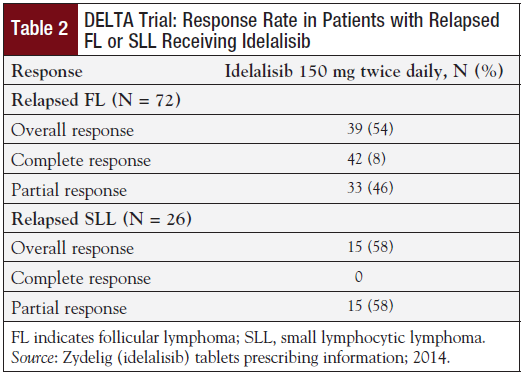 The safety and efficacy of idelalisib in patients with relapsed SLL were also evaluated in the DELTA clinical trial.18,19 Overall, 26 patients with relapsed SLL received 150 mg of idelalisib orally twice daily until evidence of disease progression or unacceptable toxicity. The primary end point was Independent Review Committee–assessed ORR. Tumor response was assessed using revised response criteria for malignant lymphoma, as recommended by the International Working Group.18,19

Patient population. The patients’ median age was 65 years.18 The majority of patients were male (73%), Caucasian (81%), and had a baseline ECOG performance status of 0 or 1 (96%). The patients had received at least 2 previous treatments, and their disease had relapsed within 6 months after treatment with rituximab and an alkylating agent. The patients’ median time since SLL diagnosis was 6.7 years. The median number of previous treatments was 4 (range, 2-9) and included bendamustine plus rituximab; fludarabine, cyclophosphamide, and rituximab; and R-CHOP. At baseline, 27% of patients had extranodal disease.18,19

An improvement in survival or disease-related symptoms has not been established for idelalisib in relapsed SLL. The continued approval of idelalisib for the treatment of patients with relapsed SLL may be contingent on the verification of clinical benefit in confirmatory clinical trials.16,19

The majority of adverse events among patients receiving idelalisib plus rituximab were consistent with those expected for patients with relapsed CLL who had received extensive previous therapy.17

In Study 116, serious adverse events were reported in 49% of the patients who received idelalisib plus rituximab.17,18 The most frequent serious adverse events included pneumonia, pyrexia, sepsis, febrile neutropenia, and diarrhea (Table 3). Adverse reactions leading to the discontinuation of idelalisib therapy occurred in 10% of the patients; the most common of these reactions included hepatotoxicity and diarrhea or colitis.17,18 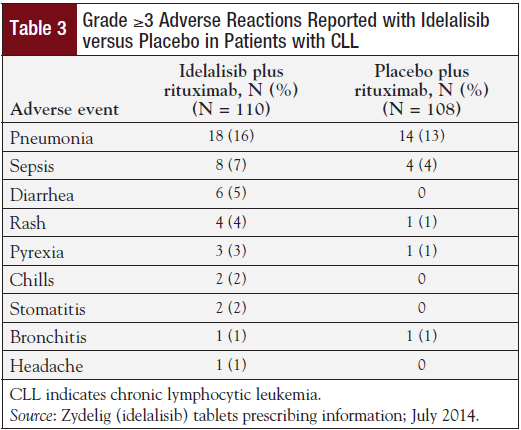 Dose interruption of idelalisib was required in 35% of patients with relapsed CLL.18 Overall, 15% of the patients needed dose reductions as a result of adverse events or laboratory abnormalities; the most common reasons for dose reductions included elevated transaminase levels, diarrhea or colitis, and rash.18

Idelalisib is contraindicated in patients with a history of serious allergic reactions, including anaphylaxis and toxic epidermal necrolysis.18

Hepatotoxicity. In clinical trials, 14% of patients who received idelalisib experienced fatal and/or serious hepatotoxicity. In addition, elevations in transaminase levels greater than 5 times the upper limit of normal have been observed. These findings were typically noted within the first 12 weeks of treatment with idel­alisib and were reversible with dose interruption.18

The use of idelalisib concurrently with other drugs that may cause liver toxicity is not recommended.18

After interruption of idelalisib therapy and, in some instances, the use of corticosteroids, the median time to resolution of diarrhea ranged from 1 week to 4 weeks.18

Pneumonitis. Patients taking idela­lisib have experienced fatal and serious pneumonitis. Pneumonitis should be suspected in patients who are taking idelalisib and present with pulmonary symptoms, including cough, dyspnea, hypoxia, interstitial infiltrates on a radiologic examination, or a decline of >5% in oxygen saturation.18

For patients with possible pneumonitis, idelalisib should be interrupted until an etiology for lung symptoms has been determined. Patients with pneumonitis that is believed to be caused by idelalisib have discontinued idelalisib therapy and received corticosteroids.18

Anaphylaxis. Serious allergic reactions, including anaphylaxis, have been reported in patients taking idel­alisib. Idelalisib should be permanently discontinued if this occurs, and appropriate supportive measures should be instituted.18

Neutropenia. Across clinical trials, 31% of patients receiving idelalisib experienced treatment-emergent grade 3 or 4 neutropenia. Blood counts should be monitored a minimum of every 2 weeks for the first 3 months of therapy and at least weekly in patients whose neutrophil counts are <1.0 Gi/L.18

Embryofetal toxicity. Idelalisib may cause fetal harm when administered to a pregnant woman.18 If idela­lisib is used during pregnancy, or if a patient becomes pregnant while taking this drug, she should be made aware of the potential hazard to the fetus. While taking idelalisib, women of reproductive potential should avoid becoming pregnant. Effective contraception can be used during idelalisib treatment and for at least 1 month after the last dose.18

Pregnancy. Idelalisib is a pregnancy category D teratogen and may cause teratogenicity and/or embryofetal lethality. Women should avoid becoming pregnant while taking idelalisib.18

Nursing mothers. Because many drugs are excreted in human milk and because of the potential for idelalisib-related adverse events in nursing infants from idelalisib, nursing or idelalisib should be discontinued based on the importance of the drug to the mother.18

Pediatric use. The safety and effi­cacy of idelalisib in pediatric patients have not been established.18

Geriatric use. In clinical trials of idel­alisib for relapsed CLL, relapsed follicular lymphoma, and relapsed SLL, 63% of patients receiving the agent (131 of 208) were aged ≥65 years. No meaningful differences in efficacy were observed among age cohorts.18

Idelalisib, the first FDA-approved PI3Kδ inhibitor, is an effective and safe treatment option for patients with relapsed CLL, relapsed follicular lymphoma, or relapsed SLL. Based on a significant PFS benefit, idela­lisib joins ibrutinib as an FDA-approved oral agent for use in patients with relapsed CLL. In relapsed follicular lymphoma and relapsed SLL, idelalisib was approved under the accelerated approval program based on ORR data. Clinical trials to collect data verifying the clinical benefit of idelalisib in these 2 indolent lymphomas are under way.20