Multiple myeloma, also referred to as myeloma, is a malignant neoplasm of plasma cells in the bone marrow that leads to bone destruction and bone marrow failure.1,2 According to the American Cancer Society, an estimated 26,850 new cases of myeloma will be diagnosed in 2015, and 11,240 deaths will be attributed to myeloma.3

Relatively uncommon, myeloma represents approximately 1% of all cancers. Nevertheless, myeloma is the second most common hematologic malignancy after non-Hodgkin lymphoma (NHL).4 Although the overall incidence of myeloma has increased nearly 1% annually since 1975, the mortality rates associated with myeloma have declined during the past 2 decades.1

Myeloma is more common in men than in women. Middle-aged or older individuals, those with a family history of myeloma, or with a personal history of monoclonal gammopathy of undetermined significance are at an increased risk for myeloma.1

The treatment of patients with myeloma has evolved substantially in recent years. The introduction of novel drugs, including thalidomide, lenalidomide, and bortezomib, as well as a better understanding of the bone marrow microenvironment, have led to new combination therapies and new anticancer drugs.7 In fact, the use of novel agents for first-line treatment of myeloma has improved outcomes, including overall responses, for patients with relapsed or refractory myeloma.7 Nevertheless, despite strides in the treatment of myeloma, there remains a marked need for additional therapeutic options and approaches for this patient population.8

Because patients with myeloma will experience disease relapse after initial treatment, multiple lines of therapy may be required. The therapeutic considerations for patients with relapsed myeloma include the duration of response to previous treatment, as well as the toxicity profile of a specific treatment and patient-specific factors.7

Mantle-cell lymphoma (MCL) is a rare malignancy, comprising approximately 5% of all NHL cases.9 MCL, which can be an aggressive cancer, most often affects men aged >60 years.9,10 The median overall survival is approximately 5 to 7 years, making MCL one of the poorest prognosis B-cell lymphomas.11

The survival outcomes are poor in part because MCL is typically diagnosed in later stages, such that the gastrointestinal tract and bone marrow are involved.9 Although data suggest a possible increase in the incidence of MCL during the past 20 years, this may be the result of improved diagnostic methods.11

In clinical practice, combinations of chemotherapy agents with anti-CD20 monoclonal antibody therapy, high-dose chemotherapy followed by autologous stem-cell transplantation, and radioimmunotherapy are relevant options for treatment-naïve patients with MCL.9 MCL typically responds to initial treatment, but the disease relapses within a few years or becomes refractory to therapy, requiring subsequent lines of therapy.10

There is no consensus regarding the management of patients with relapsed or refractory MCL. Treatment decisions are based on several factors, including timing of disease relapse, disease extent, patient age, overall health, and previous therapies.10

There are few assessments of the cost burden associated with MCL. A 2012 cost-effectiveness study based on US payer data showed that the total per-patient costs for patients with MCL exceeded $100,000.16 In this study, which compared the combination of bendamustine plus rituximab with rituximab plus cyclophosphamide, doxorubicin, vincristine, and prednisone (R-CHOP) in treatment-naïve patients with MCL, the calculated average per-patient costs exceeded $115,000 and $100,200 for bendamustine plus rituximab and R-CHOP, respectively.16

The new indication for retreatment with bortezomib was based on findings from the phase 2 clinical trial known as RETRIEVE, as well as other supportive data.17,18 The revised drug labeling now includes dosing guidelines and safety and efficacy data on bortezomib therapy as a single agent or in combination with dexamethasone in patients who had previously received treatment with bortezomib.19

According to Michael Vasconcelles, MD, Global Head, Oncology Therapeutic Area Unit, Takeda Pharmaceuticals, “For the past 11 years, Velcade has played an impor­tant role as the only therapy proven to extend overall survival for patients with newly diagnosed and relapsed multiple myeloma.” Dr Vasconcelles added, “With these newly approved dosing guidelines, physicians will be able to provide their patients, who have previously received Velcade, with an effective treatment extending Velcade use across the continuum of care of multiple myeloma.”18

On October 9, 2014, the FDA approved bortezomib for the treatment of treatment-naïve patients with MCL, making it the first US treatment to receive FDA approval for this setting.20 This approval extends the use of bortezomib beyond relapsed or refractory MCL, for which it has been indicated since 2006. The approval for treatment-naïve patients with MCL was based on the results of a phase 3 clinical trial comparing the regimen of bortezomib plus rituximab, cyclophosphamide, doxorubicin, and prednisone (VcR-CAP) with the R-CHOP regimen.19,20

According to Andrew Evens, DO, MSc, Director, Tufts Cancer Center; Chief, Division of Hematology/Oncology; and Director, Lymphoma Program, Tufts School of Medicine, “There are several new targeted drugs approved by the FDA for patients with relapsed or refractory, but up to this point, there had been none approved for the treatment of patients with previously untreated disease. Velcade, when used in the VcR-CAP regimen, has demonstrated improved outcomes for patients, making it an important advance for the treatment of newly diagnosed patients with MCL.”20

Bortezomib is a reversible inhibitor of the chymo­trypsin-­like activity of the 26S proteasome in mammalian cells. The 26S proteasome is a large protein complex ­that degrades ubiquitinated proteins. The ubiquitin-­proteasome pathway plays an essential role in regulating the intracellular concentration of specific proteins, thereby maintaining homeostasis within cells. Inhibition of the 26S proteasome prevents this targeted proteolysis, which can affect multiple signaling cascades within the cell. The disruption of the normal homeostatic mechanisms on the cellular level can lead to cell death.19 In vitro experiments have demonstrated that bortezomib is cytotoxic to a variety of cancer cell types. In nonclinical tumor models, bortezomib therapy causes a delay in tumor growth in vivo.19

The updated labeling for bortezomib is consistent with the National Comprehensive Cancer Network Clinical Practice Guidelines for the treatment of patients with relapsed myeloma, which state that if disease relapse occurs more than 6 months after the completion of the initial primary therapy, patients may be retreated with the same primary regimen.2

Six 3-week treatment cycles of VcR-CAP are recommended for patients with MCL.19 Two additional VcR-CAP cycles should be administered to patients whose first documented response occurs at the end of 6 cycles.19

Pivotal Phase 2 Clinical Trial: Bortezomib Retreatment in Relapsed Myeloma
The efficacy and safety of bortezomib retreatment of patients with relapsed myeloma were evaluated in the RETRIEVE study, an international, single-arm, open-label, phase 2 clinical trial.7 In this study, 130 patients (aged ≥18 years) with myeloma who previously had at least a partial response after receiving a bortezomib-based regimen (median of 2 previous lines of therapy) were retreated with intravenous bortezomib at disease progression.7 Patients were excluded from this trial if they had peripheral neuropathy or neuropathic pain of grade ≥2.7 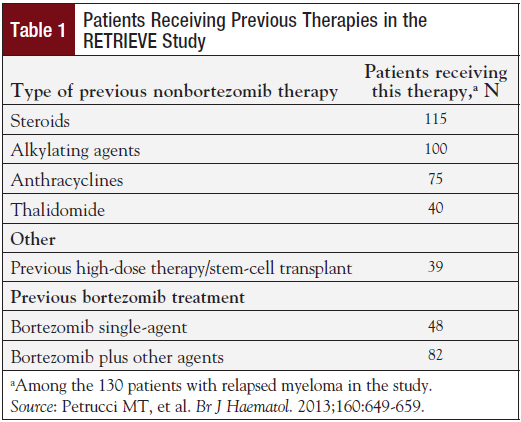 The primary end point of this clinical trial was the best confirmed response to bortezomib retreatment as assessed by the European Group for Blood and Marrow Transplantation criteria. Retreatment with bortezomib demonstrated a 38.5% overall response rate (Table 2), with a median duration of response of 6.5 months (range, 0.6-19.3 months).19 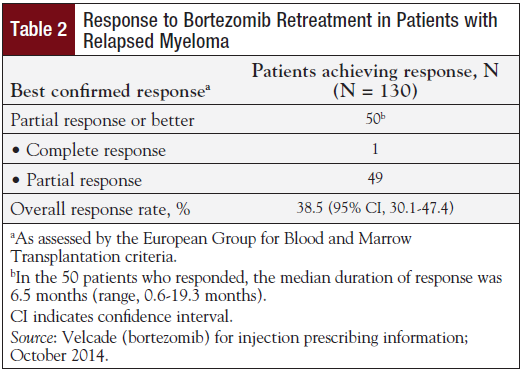 The approval of bortezomib in patients with previously untreated MCL was based on an open-label phase 3 clinical trial.19,20 In this trial, 487 adults with stage II to IV MCL who were ineligible or not considered for bone marrow transplantation received VcR-CAP (N = 243) or R-CHOP (N = 244).19

The primary end point of this trial was median progression-free survival, which was based on independent radiographic assessment. The progression-free survival results demonstrated a significant advantage of the VcR-CAP regimen over the R-CHOP regimen—25 months with the VcR-CAP regimen versus 14 months with the R-CHOP regimen (Table 3).19 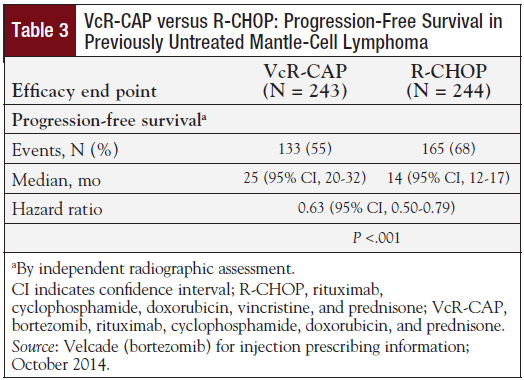 Peripheral neuropathy. Patients should be monitored for symptoms of neuropathy, such as a burning sensation, hyperesthesia, hypoesthesia, paresthesia, discomfort, neuropathic pain, or weakness. Patients experiencing new or worsening peripheral neuropathy during bortezomib therapy may require a decrease in dose and/or a less dose intense schedule, or a discontinuation of bortezomib. Patients with preexisting severe neuropathy should receive bortezomib only after a careful risk–benefit assessment.19

Hypotension. Caution should be exercised when treating patients with a history of syncope, patients receiving antihypertensive agents, or patients experiencing dehydration.19

Cardiac toxicity. The worsening and development of cardiac failure have occurred during bortezomib therapy. Patients with existing heart disease or with risk factors for heart disease should be closely monitored.19

Gastrointestinal toxicity. Nausea, diarrhea, constipation, and vomiting may require the use of antiemetic and antidiarrheal medications or fluid replacement.19

Thrombocytopenia or neutropenia. The cyclical pattern of platelet and neutrophil decreases and recovery that is associated with bortezomib use were also observed in studies of retreatment for myeloma and in untreated MCL, with no evidence of cumulative thrombocytopenia or neutropenia. Complete blood counts should be monitored regularly during treatment with bortezomib.19

Embryofetal risk. Women of reproductive potential should avoid becoming pregnant while receiving bor­tezomib therapy. Pregnant women should be advised of the potential for embryofetal harm.19

Pregnancy. No adequate studies were conducted with bortezomib in pregnant women. Women who are pregnant while receiving bortezomib should be informed of the potential hazards to the fetus.19

Pediatric use. The safety and efficacy of bortezomib in children have not been established.19

Geriatric use. No overall differences in the safety or efficacy of bortezomib were observed between patients aged ≥65 years and younger patients; however, greater sensitivity of some older individuals cannot be ruled out.19

Renal impairment. Dosing adjustments are not necessary for patients with renal insufficiency. Because dialysis may reduce bortezomib concentrations, bortezomib should be administered after the dialysis procedure.19

Bortezomib is the first treatment to be approved in the United States for use in patients with previously untreated MCL. A large randomized clinical trial demonstrated improved progression-free survival and superior response rates with the VcR-CAP regimen compared with the R-CHOP regimen, a frequently used first-line regimen in this setting. Clinical studies are under way to evaluate the use of bortezomib in combination with other regimens that are used in previously untreated and relapsed MCL.21