An acute bacterial skin and skin-structure infection (ABSSSI) is a bacterial infection of the skin with a lesion size of ≥75 cm2, which is measured by the area of redness, edema, or induration.1 The types of infections that comprise ABSSSIs include cellulitis or erysipelas, major cutaneous abscesses, and wound infections1; these infections can be life-threatening and may require hospitalization and surgery.2

Streptococcus pyogenes and Staphylococcus aureus, including methicillin-resistant S aureus (MRSA), are the most common bacterial pathogens responsible for ABSSSIs. The less common ABSSSI-causing pathogens include other Streptococcus species, Enterococcus faecalis, and gram-negative bacteria.1 In the United States, more than 2 million individuals are infected with antibiotic-resistant bacteria annually, and at least 23,000 die annually as a direct result of these infections.3

Cellulitis, a skin infection that is primarily attributed to streptococci, is most often caused by Streptococcus and Staphylococcus; however, the incidence of MRSA as the cause of cellulitis is increasing.4 The prevalence rate of leg erysipelas or cellulitis, which can occur anywhere on the body but usually affects the lower leg, is estimated to be more than 1 per 1000 persons annually.5

S aureus, particularly MRSA, is associated with major health complications and mortality. Furthermore, S aureus infections are particularly challenging to treat because of their potential for resistance to antimicrobial drugs.6 In addition, S aureus imposes a substantial economic burden on patients and on hospitals. In intensive care units, an estimated 59.5% to 64.4% of S aureus strains are methicillin-resistant.6 A study sponsored by the Centers for Disease Control and Prevention (CDC) showed that S aureus–related hospitalizations increased 62% between 1999 and 2005, and MRSA-related hospitalizations more than doubled during this period.6 Furthermore, S aureus–related deaths averaged 10,800 and MRSA-related deaths averaged 5500 annually.6

Recent evidence indicates that community-acquired MRSA strains are spreading into healthcare institutions.9 Consequently, there is an urgent need to reduce the inappropriate use of antimicrobial agents and to increase awareness about MRSA in the community setting, including in daycare centers, schools, and environments with at-risk individuals (eg, the elderly, immunodeficient persons).6,9

More expensive to treat than susceptible infections, antimicrobial drug-resistant infections are associated with a 30% to 100% increase in mortality, illness, and direct costs.10 In a study that assessed 1,472,965 hospitalization episodes, of which 23,026 had skin and skin-structure infections as a secondary diagnosis, patients with skin and skin-structure infections had significantly (5 days) longer hospital stays, a higher mortality rate (5.4% vs 3.5%, respectively), and higher (excess of >$21,000) hospital costs compared with matched controls.11

The management of ABSSSIs presents several challenges. For example, aside from its link to drug-resistant gram-positive pathogens, an ABSSSI often requires antimicrobial or antibiotic therapy. Antibiotic resistance and adverse effects may limit the use of some antibiotic agents—factors that underscore the need for novel therapies to help combat drug-resistant pathogens.2,7

On June 20, 2014, the US Food and Drug Administration (FDA) approved tedizolid phosphate (Sivextro; Cubist Pharmaceuticals) for the treatment of adults with an ABSSSI that is caused by designated susceptible bacteria.12 To reduce the development of drug-resistant bacteria and maintain the effectiveness of tedizolid phosphate and other antibacterial drugs, tedizolid phosphate should only be used to treat or to prevent infections that are proved or strongly suspected to be caused by bacteria.12,13

According to Edward Cox, MD, MPH, Director of the Office of Antimicrobial Products in the FDA’s Center for Drug Evaluation and Research, “Today’s approval provides physicians and patients with a new treatment option for serious skin infections.”12

Barbara Murray, MD, Professor and Director of the Division of Infectious Diseases, University of Texas Health Science Center Medical School, Houston, and President of the Infectious Diseases Society of America, commented that this news is “encouraging.” She added, “We still have a great deal more work to do to combat antibiotic resistance and ensure we have the tools necessary to help the patients who need it the most.”14

Tedizolid phosphate is available in 2 dosage forms—as a 200-mg, sterile, lyophilized powder in a single-use vial for reconstitution for intravenous (IV) infusion, and as a 200-mg tablet.13

Tedizolid phosphate is the prodrug of tedizolid, which is a member of the oxazolidinone class of antibacterial agents.13 Tedizolid’s antibacterial activity is mediated by binding to the 50S subunit of the bacterial ribosome, resulting in the inhibition of protein synthesis. Tedizolid inhibits bacterial protein synthesis through a mechanism of action different from that of other nonoxazolidinone classes of antibac­terial drugs; therefore, cross-resistance between tedizolid and other classes of antibacterial drugs is unlikely. The results of in vitro time-kill studies show that tedizolid is bacteriostatic against enterococci, staphylococci, and streptococci.13

The safety and efficacy of tedizolid phosphate were evaluated in 2 multicenter, multinational, double-blind, noninferiority clinical trials that involved 1315 adults with ABSSSIs.2,15 In both studies, tedizolid 200 mg once daily for 6 days was compared with linezolid 600 mg every 12 hours for 10 days. Patients with cellulitis or erysipelas, major cutaneous abscess, or wound infection were enrolled in the clinical trials. Patients with wound infections could have received aztreonam and/or metronidazole as adjunctive therapy for gram-negative bacterial coverage, if needed. The intent-to-treat (ITT) patient population included all randomized patients.2,15

The ESTABLISH-1 clinical trial (Trial 1) showed that tedizolid phosphate 200 mg once daily for 6 days was noninferior to linezolid 600 mg every 12 hours for 10 days in early clinical response (ie, 48-72 hours after initial treatment for an ABSSSI), indicating that tedizolid phosphate may be a useful alternative to linezolid for appropriate patients.2,13

The primary end point of the study was early clinical response, defined as no increase from the baseline lesion area at 48 to 72 hours after the first dose of tedizo­lid phosphate and an oral temperature of ≤37.6°C, to be confirmed by a second temperature measurement within 24 hours in the ITT population.2,13

The key findings from Trial 1 are shown in Table 1. 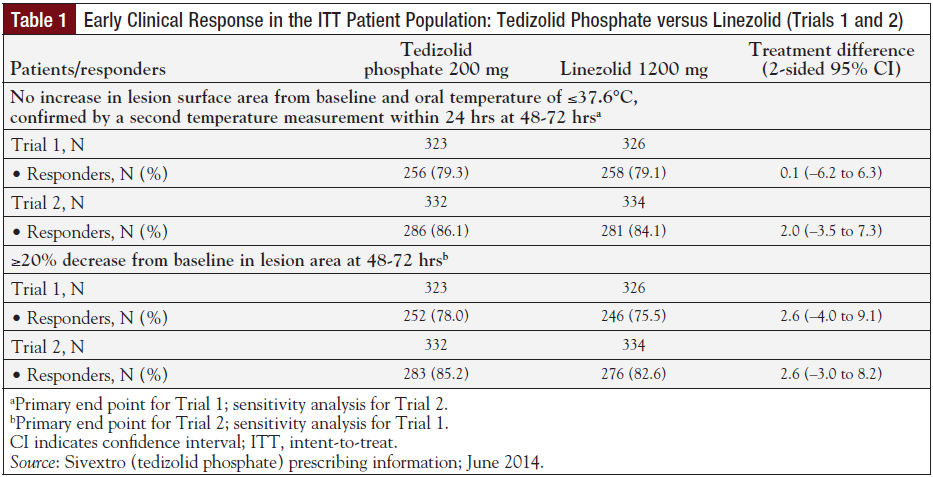 In the ESTABLISH-2 clinical trial (Trial 2), tedizolid phosphate 200 mg for 6 days was shown to be noninferior to twice-daily linezolid 600 mg for 10 days, demonstrating that tedizolid phosphate may be a useful therapeutic option for the treatment of an ABSSSI in the hospital and the outpatient settings.13,15

The primary end point of this study was early clinical response, which was defined as a ≥20% decrease from the baseline lesion area at 48 to 72 hours after the first dose in the ITT population.13,15

The key findings from Trial 2 are also shown in Table 1.

An investigator assessment of clinical response was conducted at the posttherapy evaluation (ie, 7-14 days after the end of therapy) in the ITT population and in the clinically evaluable population. Clinical success was defined as the resolution or near resolution of most disease-specific signs and symptoms; the absence or near resolution of systemic signs of infection if present at baseline (eg, lymphadenopathy, fever, >10% immature neutrophils, abnormal neutrophils, abnormal WBC count); and no new signs, symptoms, or complications attributable to an ABSSSI that would require further treatment of the primary lesion (Table 2).2,13,15

Early clinical response by baseline pathogens from the primary infection site or blood cultures for the microbiologic ITT patient population in Trials 1 and 2 are shown in Table 3.2,13,15 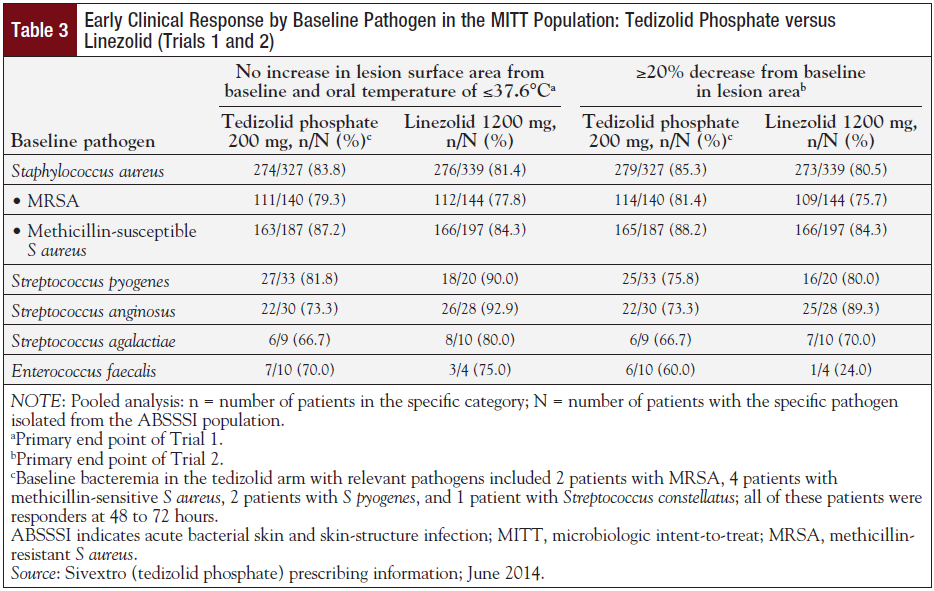 The most common (≥2%) adverse reactions associated with tedizolid phosphate are nausea, headache, diarrhea, vomiting, and dizziness.13

Tedizolid phosphate has no contraindications.

Clostridium difficile–associated diarrhea. Treatment with antibacterial agents can alter the normal flora of the colon and may permit overgrowth of C difficile, which contributes to the development of C difficile–­associated diarrhea (CDAD). Patients who present with diarrhea after taking antibiotics should be evaluated for CDAD. If CDAD is suspected or confirmed, antibacterial medications not directed against C difficile should be discontinued, if possible. Appropriate measures should be instituted as clinically indicated.13

Pediatric use. The safety and effectiveness of tedizo­lid phosphate in pediatric patients aged <18 years have not been established.13

Geriatric use. Clinical studies of tedizolid phosphate did not include sufficient numbers of patients aged ≥65 years to determine whether they respond different from younger patients. No overall differences in pharmacokinetics were observed between elderly patients and younger patients.13