Idiopathic pulmonary fibrosis, a debilitating lung disease, affects approximately 128,100 patients in the United States, with 48,000 new cases diagnosed annually.1 Idiopathic pulmonary fibrosis is defined as a specific form of chronic, progressive fibrosing interstitial pneumonia of unknown cause that occurs primarily in older adults (ie, aged 50-75 years).2 The disease is characterized by progressive worsening of dyspnea (shortness of breath) and lung function, as well as a poor prognosis.2 In fact, the median survival for patients with idiopathic pulmonary fibrosis in the United States is 2.5 to 3.5 years after diagnosis, with the disease claiming an estimated 40,000 lives annually.3

According to a retrospective 2001-2008 claims database analysis, the total direct medical costs for people with idiopathic pulmonary fibrosis were $26,378 per person annually; furthermore, these costs were $12,124 higher than the costs incurred by age- and sex-­matched control patients.7 During this same period, the all-cause hospital admission rates and the all-cause outpatient visits for patients with idiopathic pulmonary fibrosis were twice that of the control group.7

Patients with idiopathic pulmonary fibrosis may receive oxygen therapy and/or pulmonary rehabilitation. For some patients with severe disease, a lung transplantation may be a last-resort option if other treatment options fail.4

In the past, conventional medications for patients with idiopathic pulmonary fibrosis included glucocorticosteroids (ie, prednisone) or immunosuppressants.8 A 2-drug combination regimen of prednisone and azathioprine or a 3-drug regimen of prednisone, azathioprine, and N-acetylcysteine were used to treat the disease.8 However, based on the findings from the PANTHER-IPF study that was funded by the National Heart, Lung, and Blood Institute and published in 2012, treatment with the triple combination of prednisone, azathioprine, and N-acetylcysteine was shown to increase the rate of mortality and hospitalization compared with placebo.8

Until October 2014, no medications were approved by the US Food and Drug Administration (FDA) for the treatment of patients with idiopathic pulmonary fibrosis.9 Approaches that reduce the decline in forced vital capacity may slow the progression of this devastating disease and improve outcomes for affected patients.10

Also on October 15, 2014, the FDA approved pirfenidone (Esbriet; InterMune), a pyridone, for the treatment of patients with idiopathic pulmonary fibrosis.11 Together, nintedanib and pirfenidone are the first 2 therapies to receive FDA approval for this life-threatening disease.

Nintedanib binds competitively to the adenosine triphosphate-binding pocket of these receptors and blocks the intracellular signaling, which is crucial for the proliferation, migration, and transformation of fibroblasts, representing essential mechanisms of the idiopathic pulmonary fibrosis pathology.12

Nintedanib is available in 150-mg and 100-mg capsules. The recommended dosage of nintedanib is 150 mg twice daily administered approximately 12 hours apart. Nintedanib capsules should be taken with food and swallowed whole with liquid. Liver function tests should be conducted before starting treatment with nintedanib.12

Nintedanib capsules should not be chewed or crushed because of a bitter taste. The effect of chewing or crushing the drug capsule on the pharmacokinetics of nintedanib is not known.12

A temporary dose reduction to 100 mg, treatment interruption, or treatment discontinuation may be required to manage the adverse reactions of nintedanib therapy.12

The clinical efficacy of nintedanib has been evaluated in 1231 patients in 3 studies, including 1 phase 2 clinical trial and 2 phase 3 trials.6,10,12 All 3 clinical trials were randomized, double-blind, placebo-controlled studies that compared the treatment of nintedanib 150 mg twice daily with placebo for 52 weeks. In all 3 studies, patients had to have a diagnosis of idiopathic pulmonary fibrosis for <5 years. Patients were aged ≥40 years and had a forced vital capacity ≥50% of predicted value and a carbon monoxide diffusing capacity of the lung for carbon monoxide (corrected for hemoglobin) that was 30% to 79% of the predicted value.12

In the TOMORROW clinical trial, patients (mean age, 65 years) were randomized in a 1:1 ratio to receive nintedanib 150 mg or placebo twice daily for 52 weeks.6 The primary end point was the annual rate of decline in forced vital capacity.6 This study also evaluated several other doses of nintedanib, including 50 mg and 100 mg.6,12

Table 1 shows the primary end point results from the TOMORROW clinical trial. The adjusted annual rate of change in forced vital capacity was –60 mL in the nintedanib group versus –191 mL in the placebo group, representing a difference of 131 mL annually6,12; patients who received nintedanib had a significant reduction (68%) in the annual rate of decline of forced vital capacity compared with patients who received placebo, based on the random coefficient regression model that was adjusted for gender, height, and age.6,12 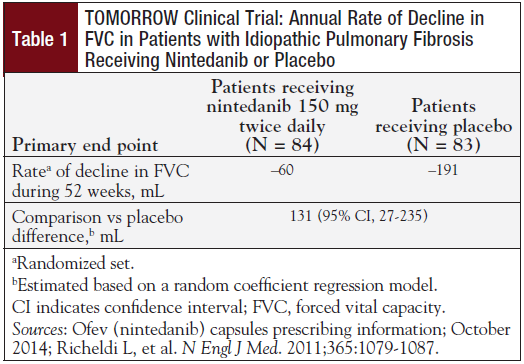 INPULSIS-1 and INPULSIS-2 were 52-week, randomized, double-blind, phase 3 clinical trials in 1066 patients (mean age, 67 years) who were randomized in a 3:2 ratio to receive nintedanib or placebo.10 These 2 studies were identical in design. The primary end point in both studies was the annual rate of decline in forced vital capacity.10,12

The safety of nintedanib was evaluated in more than 1000 patients with idiopathic pulmonary fibrosis; more than 200 patients were exposed to nintedanib for more than 2 years in the clinical studies. The most common adverse reactions (≥5%) with nintedanib therapy included diarrhea (62%), nausea (24%), abdominal pain (15%), vomiting (12%), liver enzyme elevation (14%), decreased appetite (11%), headache (8%), weight loss (10%), and hypertension (5%).12

Nintedanib has no known contraindications.12

The coadministration of P-glycoproteins and cytochrome P3A4 inhibitors, including ketoconazole, may increase the exposure to nintedanib. Patients should be monitored closely for tolerability of nintedanib.12

Elevated liver enzymes. Nintedanib therapy is associated with elevated levels of liver enzymes, including alanine transaminase (ALT), aspartate transaminase (AST), and bilirubin. Liver function tests should be conducted before starting treatment with nintedanib. ALT, AST, and bilirubin levels should be monitored before and during treatment; temporary dosage reductions or discontinuation of nintedanib therapy may be required.12

Gastrointestinal disorders. Diarrhea, nausea, and vomiting have occurred with nintedanib. At first signs of these gastrointestinal symptoms, patients should receive adequate hydration and antidiarrheal medicine (eg, loperamide) or antiemetics. Nintedanib therapy should be discontinued if severe diarrhea, nausea, or vomiting persists despite symptomatic treatment.12

Embryofetal toxicity. Nintedanib can cause fetal harm when administered to a pregnant woman. Women of childbearing potential should be advised of the potential hazard of nintedanib to the fetus; they should also be advised to avoid becoming pregnant while receiving nintedanib, and to use adequate contraception during treatment and at least 3 months after the last dose of nintedanib.12

Bleeding risk. Bleeding events have been reported with nintedanib. In patients with known bleeding risk, nintedanib should only be used if the anticipated benefit outweighs the potential risk.12

Pregnancy. Nintedanib is listed as pregnancy category D. Because nintedanib can cause harm to the fetus, women of childbearing potential should be advised to avoid becoming pregnant while receiving treatment with nintedanib.

Nursing mothers. The excretion of nintedanib and/or its metabolites into human milk is probable. Because of the potential for serious adverse reactions in nursing infants from nintedanib, a decision should be made whether to discontinue nursing or to discontinue nintedanib, taking into account the importance of the drug to the mother.12

Pediatric use. The safety and efficacy of nintedanib in pediatric patients have not been established.12

Renal impairment. The safety and efficacy of nintedanib have not been studied in patients with severe renal impairment and with end-stage renal disease.12

Treatment with nintedanib, a tyrosine kinase inhibitor that blocks pathways thought to be involved in the scarring of lung tissue, demonstrated a significant reduction in the adjusted annual rate of decline of forced vital capacity in patients with idiopathic pulmonary fibrosis compared with placebo. This beneficial treatment effect of nintedanib on forced vital capacity was consistent across 3 clinical trials.