Invokamet (Canagliflozin plus Metformin HCl): First Fixed-Dose Combination with an SGLT2 Inhibitor Approved for the Treatment of Patients with Type 2 Diabetes

Diabetes is a chronic disease that affects an estimated 29.1 million individuals in the United States—approximately 9.3% of the US population.1 In addition, a staggering 37% of US adults have prediabetes, placing them at a high risk for diabetes.1 Coinciding with the aging of the US population, the prevalence of diabetes is projected to increase dramatically over the next few decades, from approximately 1 in 10 adults today to approximately 1 in 3 adults by 2050.2 Approximately 90% to 95% of all cases of diabetes are type 2 diabetes mellitus, a disease that is characterized by insulin resistance and a gradual decline in the ability of the pancreas to produce insulin.1

Diabetes is associated with multiple comorbidities, as well as microvascular, macrovascular, and neuropathic complications that impact the quality of life.1 The seventh leading cause of mortality in the United States, diabetes is a major cause of stroke and heart disease and is the leading cause of kidney failure, new cases of blindness, and nontraumatic lower-limb amputations. Furthermore, individuals with diabetes are at an increased risk for nerve disease, nonalcoholic fatty liver disease, periodontal disease, erectile dysfunction, hearing loss, depression, and pregnancy complications compared with individuals without diabetes.1

Improvements in glycemic control have been shown to reduce the morbidity and mortality associated with type 2 diabetes mellitus by decreasing chronic complications. Lowering hemoglobin (Hb) A1c levels to ≤7% is associated with a reduction in diabetes-related microvascular complications (ie, diabetic neuropathy, nephropathy, and retinopathy).4 In its 2013 position statement, the American Diabetes Association (ADA) recommends a general HbA1c target goal of <7% for adult patients with diabetes, acknowledging that more stringent or less stringent goals may be appropriate for individual patients.4 According to the ADA, the target goal should be individualized based on the patient’s duration of diabetes, age, comorbidities, known cardiovascular or advanced microvascular complications, and other patient factors.4

The American Association of Clinical Endocrinologists recommends an HbA1c target goal of <6.5% for the majority of patients with type 2 diabetes mellitus, acknowledging that this goal may be too aggressive for some patients and not aggressive enough for other patients (ie, younger patients for whom a lower target may prevent subsequent complications).5

Although the number of individuals in the United States who achieve the target HbA1c levels of <7% has been increasing in recent years, further strategies are needed to improve the achievement of glycemic-control targets and overall outcomes for individuals with diabetes or those at risk for diabetes.4

The kidney plays a key role in maintaining glucose homeostasis. Evidence suggests that in patients with type 2 diabetes mellitus, there is an increase in the amount of renal glucose that is released, thereby implicating the kidneys’ contribution to hyperglycemia.6 In hyperglycemia, excess glucose is reabsorbed by the kidneys—a process that increases the renal glucose threshold and ­creates a cycle of chronic hyperglycemia, along with associated microvascular complications.6 The sodium-­glucose cotransporter 2 (SGLT2), a cotransporter that is expressed in the proximal renal tubules, mediates the active transport of glucose against a concentration ­gradient via cotransport with sodium. SGLT2 is responsible for reabsorbing 90% of the glucose that is filtered at the glomerulus.6 SGLT2 inhibitors represent a novel class of drugs that lower the renal threshold for glucose, thereby increasing urinary glucose excretion.6,7 Combined with diet and exercise, these agents have a promising role in improving glycemic control in patients with type 2 diabetes mellitus.

Richard B. Aguilar, MD, Medical Director of Diabetes Nation, said, “InvokametTM combines, in one tablet, two complementary therapeutic approaches proven effective for managing type 2 diabetes. Canagliflozin works with the kidney to promote the loss of glucose in the urine, whereas metformin decreases the production of glucose in the liver and improves the body’s response to insulin.”8

Canagliflozin plus metformin combines 2 oral antihyperglycemic agents with complementary mechanisms of action to improve glycemic control in patients with type 2 diabetes mellitus—canagliflozin, an SGLT2 inhibitor, and metformin, a member of the biguanide class.10

SGLT2, expressed in the proximal renal tubules, is responsible for the majority of the reabsorption of filtered glucose from the tubular lumen. By inhibiting SGLT2, canagliflozin reduces reabsorption of filtered glucose and lowers the renal threshold for glucose, thereby increasing urinary glucose excretion.10 Metformin is an antihyperglycemic agent that improves glucose tolerance in patients with type 2 diabetes by lowering basal and postprandial plasma glucose. Metformin decreases hepatic glucose production, decreases intestinal absorption of glucose, and improves insulin sensitivity by increasing peripheral glucose uptake and utilization.10

Treatment with canagliflozin plus metformin demonstrated clinically significant improvements in HbA1c levels compared with placebo in patients with type 2 diabetes. These reductions were observed across subgroups, including age, sex, race, and baseline body mass index.7,10,11

Studies have been conducted on canagliflozin in combination with metformin alone, metformin and sulfonylurea, metformin and a thiazolidinedione (ie, pioglitazone), and metformin and insulin (with or without other antihyperglycemic agents).10 In addition, the efficacy of canagliflozin was compared with a dipeptidyl peptidase-4 inhibitor (sitagliptin) and with a sulfonyl­urea (glimepiride).7,10,11

Canagliflozin as Add-On to Metformin

A 26-week, double-blind, placebo-controlled phase 3 clinical trial evaluated the efficacy and safety of canagliflozin in combination with metformin.7 This study included 1284 patients with type 2 diabetes mellitus that was inadequately controlled with metformin monotherapy (≥2000 mg daily or ≥1500 mg daily if a higher dose was not tolerated). The patients’ mean age was 55 years; 47% were men, and the mean baseline eGFR was 89 mL/min/1.73 m2.10

In a 52-week, double-blind, active-controlled study, the efficacy and safety of canagliflozin plus metformin versus glimepiride plus metformin were evaluated in 1450 patients with type 2 diabetes that was inadequately controlled with metformin monotherapy (≥2000 mg daily or ≥1500 mg daily if a higher dose was not tolerated).11 The patients’ mean age was 56 years; 56% were men, and the mean baseline eGFR was 90 mL/min/1.73 m2.10

The primary end point was the change from baseline in HbA1c levels at 52 weeks (0.3% noninferiority margin for comparing each of the canagliflozin doses vs glimepiride).11 The secondary end point was changes in percent body weight at week 52.11 A total of 928 patients who tolerated the maximally required metformin dose were randomized after completing a 2-week, single-blind, placebo run-in period. In addition, 522 patients were switched to metformin monotherapy for at least 10 weeks, and then completed a 2-week single-blind run-in period. After the 2-week run-in period, all the patients were randomized to receive canagliflozin 100 mg, canagliflozin 300 mg, or glimepiride (6 mg or 8 mg, allowed throughout the 52-week study period), administered once daily as add-on therapy to metformin.10 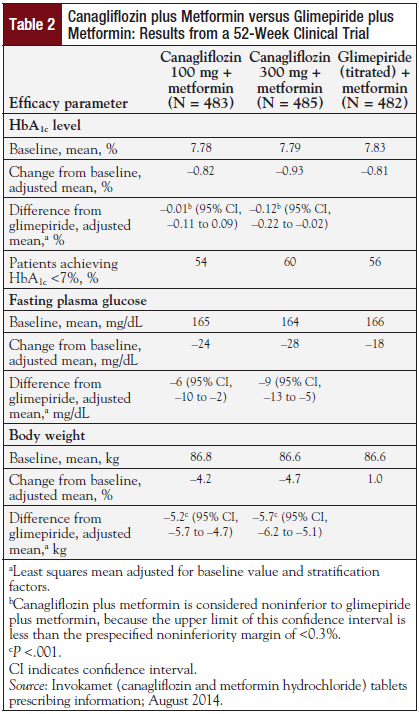 The combination of canagliflozin plus metformin is contraindicated in patients with renal impairment (eg, serum creatinine levels ≥1.5 mg/dL for males or 1.4 mg/dL for females, or eGFR <45 mL/min/1.73 m2), which may also result from conditions such as cardiovascular collapse, acute myocardial infarction, or septicemia; end-stage renal disease; or patients on dialysis.10

Uridine 5’-diphospho-glucoronosyltransferase (UGT) enzyme inducers. The concomitant use of a UGT inducer (eg, rifampin, phenytoin, phenobarbital, ritonavir) with canagliflozin plus metformin may reduce the exposure of canagliflozin; consider increasing the canagliflo­zin dose from 50 mg to 150 mg twice daily.10

Digoxin. Canagliflozin increases digoxin exposure. Patients who take canagliflozin plus metformin with concomitant digoxin should be monitored for a need to adjust the dose of either drug.10

The symptoms associated with lactic acidosis include malaise, myalgias, respiratory distress, increasing somnolence, and nonspecific abdominal distress. Laboratory abnormalities include low pH levels, increased anion gap, and elevated blood lactate levels. If lactic acidosis is suspected, the combination of canagliflozin plus metformin should be discontinued, and the patient should be hospitalized immediately.

Lactic acidosis. Patients should be cautioned against excessive alcohol use. The use of canagliflozin plus metformin is not recommended in patients with hepatic impairment or with hypoxic states. Patients should be checked for normal renal function before treatment is initiated and at least annually thereafter.10

Hypotension. Before the combination of canagliflozin plus metformin combination treatment is initiated, the volume status and correct hypovolemia should be assessed in patients with renal impairment; the elderly; patients with low systolic blood pressure; or those receiving diuretics, angiotensin-converting enzyme inhibitors, or angiotensin receptor blockers. Patients should be monitored for signs and symptoms of hypotension during therapy.10

Renal function. Potential impairment in renal function should be monitored during therapy.10

Hypoglycemia. When used in combination with canagliflozin plus metformin, a lower dose of insulin or the insulin secretagogue should be considered to reduce the risk of developing hypoglycemia.10

Vitamin B12 deficiency. Metformin may lower vitamin B12 levels; hematologic parameters should be measured annually.10

Increased low-density lipoprotein cholesterol (LDL-C) levels. Dose-related increases in LDL-C levels may occur with canagliflozin. LDL-C levels should be monitored and treated per standard of care after the combination of canagliflozin plus metformin is initiated.10

Pregnancy. Canagliflozin plus metformin should be used during pregnancy only if the potential benefit justifies the potential risk to the fetus.10

Nursing mothers. A decision should be made whether to discontinue nursing or to suspend the use of canagliflozin plus metformin, taking into account the importance of the drug to the mother.10

The recent FDA approval of the combination of canagliflozin plus metformin marks the availability of a novel SGLT2 and biguanide combination therapy in a single tablet for the treatment of patients with type 2 diabetes. Phase 3 studies demonstrated that this new combination improved HbA1c levels in patients with type 2 diabetes. In addition, canagliflozin plus metformin resulted in greater reductions in body weight and systolic blood pressure compared with metformin alone.