Castration-resistant prostate cancer (CRPC) is cancer that is resistant to medical or surgical interventions that lower testosterone levels. Metastatic CRPC is disease that has metastasized to other areas of the body.

Prostate cancer accounts for a total cost of $9.8 billion annually in the United States.2 Earlier diagnosis and management of prostate cancer may improve outcomes and reduce healthcare costs. Despite advances in care and earlier detection and intervention, many patients  with prostate cancer progress to advanced disease and will require a patient-tailored treatment plan.3

Zytiga: Expanded Indication for Use Before Chemotherapy
In December 2012, the US Food and Drug Administration (FDA) approved an expanded indication for Zytiga (abiraterone acetate), an oral cytochrome (CY)P17 inhibitor, for the treatment of men with metastatic CRPC before the use of chemotherapy. Zytiga was initially approved by the FDA in April 2011 for the treatment of patients whose prostate cancer progressed after chemotherapy with docetaxel.4

The application of abiraterone acetate for this expanded indication prechemotherapy was expedited under the FDA’s priority review program. According to Richard Pazdur, MD, Director of the Office of Oncology Drug Products in the FDA’s Center for Drug Evaluation and Research, this approval “demonstrates the benefit of further evaluating a drug in an earlier disease setting and provides patients and healthcare providers the option of using Zytiga earlier in the course of treatment.”4

Clinical Pharmacology
Abiraterone acetate is a 17 alpha-hydroxylase/C17,20-­lyase (CYP17) inhibitor indicated in combination with prednisone fot the treatment of patients with metastatic CRPC.7 Abiraterone acetate is converted in vivo to abiraterone, an androgen biosynthesis inhibitor that inhibits CYP17, an enzyme that is expressed in testicular, adrenal, and prostatic tumor tissues and is required for androgen biosynthesis.

Abiraterone acetate was shown to decrease serum testosterone and other androgens in patients in a placebo-controlled phase 3 clinical trial.8 It is not necessary to monitor the effect of abiraterone acetate on serum testosterone levels. Changes in serum prostate-specific antigen levels may be observed but have not been shown to correlate with clinical benefit in individual patients.7

Clinical Study Leading to the New Indication
The FDA approval of the expanded indication for abir­aterone acetate was based on a double-blind, placebo-­controlled, phase 3 clinical trial that included 1088 men (median age, 70 years) with late-stage CRPC who had not received previous cytotoxic chemotherapy. Patients were randomized in a 1:1 ratio to abiraterone acetate 1000 mg once daily or to placebo once daily. Both groups received concomitant prednisone 5 mg twice daily. Patients were receiving a gonadotropin-releasing hormone agonist or were previously treated with orchiectomy.8

Treatment was continued until evidence of radiographic or clinical disease progression—including cytotoxic chemotherapy, radiation, or surgical cancer treatment, pain requiring chronic opioids, or Eastern Cooperative Oncology Group (ECOG) performance status decline to ≥3—or until unacceptable toxicity occurred or withdrawal from the trial. Patients with moderate or severe pain, opiate use for cancer pain, or visceral organ metastases were excluded from this study.8

The primary end points in this study were overall survival and radiographic progression-free survival. The ECOG performance status score was 0 for 76% of the patients and 1 for 24% of the patients. The baseline pain assessment (worst pain over the past 24 hours) was 0 to 1 (ie, asymptomatic) in 66% of the patients and 2 to 3 (ie, mildly symptomatic) in 26% of the patients. Radiographic progression-free survival was assessed using sequential imaging studies and was defined by a bone scan identification of ≥2 new bone lesions with confirmation (Prostate Cancer Working Group 2 criteria) and/or modified Response Evaluation Criteria in Solid Tumors criteria for progression of soft-tissue lesions.8 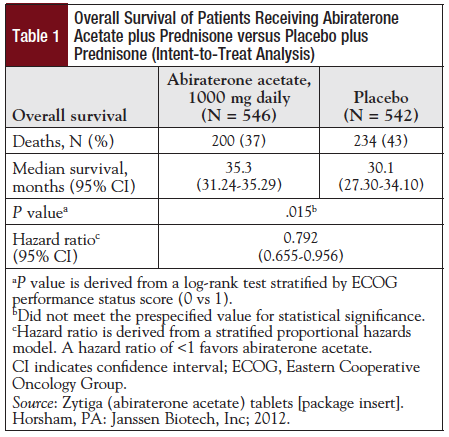 The overall survival results of the study are shown in Table 1.7 The median overall survival was 5.2 months longer in the abiraterone acetate arm than in the placebo arm (P = .015), which did not meet the prespecified value for statistical significance.8 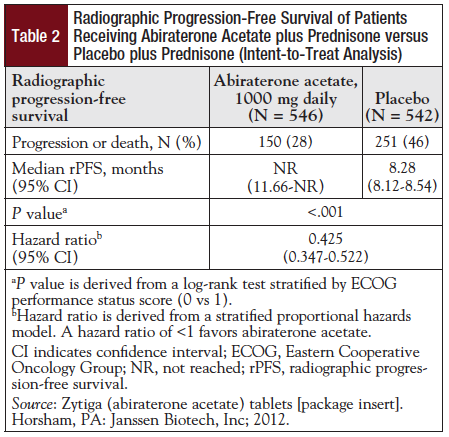 At the prespecified radiographic progression-free survival analysis (Table 2), a significant difference was found in the number of patients who showed radiographic evidence of disease progression in the abiraterone acetate group (28%) compared with the placebo group (46%; P <.001).7,8

Moreover, abiraterone plus prednisone significantly increased the median time to opiate use compared with placebo plus prednisone (median time not reached vs 23.7 months, respectively; HR, 0.686; 95% CI, 0.566-0.833; P = .001). The time to opiate use was supported by a delay in patient-reported pain progression favoring the abiraterone acetate arm.7

Contraindications and Precautions
Abiraterone acetate is contraindicated in women who are or may become pregnant. It should not be used in patients with severe hepatic impairment (Child-Pugh Class C).

Abiraterone acetate should be used with caution in patients with a history of cardiovascular disease. Hypertension should be controlled and hypokalemia should be corrected before and during treatment with this agent. In addition, blood pressure, serum potassium, and fluid retention symptoms should be monitored at least monthly while taking abiraterone.

When abiraterone acetate is used in combination with prednisone, use caution and monitor for symptoms and signs of adrenocortical insufficiency if prednisone is stopped or withdrawn, if the dose of prednisone is reduced, or if the patient experiences unusual stress. An increased dosage of corticosteroids may be indicated before, during, and after stressful situations.

Increases in liver enzymes while using abiraterone have led to drug interruption, dose modification, and/or discontinuation of the medication. Monitor liver function and modify, interrupt, or discontinue abiraterone acetate dosing as recommended in the prescribing information.7

Because abiraterone acetate is an inhibitor of the hepatic drug-metabolizing enzyme CYP2D6, coadministration with CYP2D6 substrates that have a narrow therapeutic index should be avoided. If an alternative cannot be used, exercise caution and consider a dose reduction of the CYP2D6 substrate.

Conclusion
The expanded indication of abiraterone acetate for use in combination with prednisone for the treatment of men with metastatic CRPC before chemotherapy provides a new treatment option for men with advanced CRPC for use early in the treatment paradigm before the initiation of chemotherapy. Abiraterone acetate has demonstrated improved overall survival, as well as improved radiographic progression-free survival, when used in this patient population before the administration of chemotherapy.

Abiraterone acetate in combination with prednisone is now available as a treatment option either before chemotherapy or after chemotherapy containing docetaxel for appropriate patients with metastatic CRPC whose disease has progressed while receiving androgen-deprivation therapy.