Triglycerides are important biomarkers of risk for heart disease and stroke, particularly when a patient has low high-density lipoprotein (HDL) cholesterol, elevated levels of low-density lipoprotein (LDL) cholesterol, or type 2 diabetes.1 Non-HDL cholesterol and apolipoprotein B are also predictors of coronary heart disease.2 Furthermore, triglyceride levels that exceed 1000 mg/dL are associated with acute pancreatitis, accounting for approximately 10% of all cases.1

The AHA statement includes several triglyceride-lowering strategies, including losing 5% to 10% of body weight, eating a Mediterranean-style diet versus a low-fat diet, adding a marine-derived polyunsaturated fatty acid (ie, eicosapentaenoic acid [EPA] and docosahexaenoic acid [DHA]), reducing carbohydrate intake, eliminating trans fats, and implementing an exercise regimen.1 A 50% reduction in triglyceride levels can be attained when all of these strategies are combined. For patients with very high triglyceride levels or with a history of triglyceride-induced pancreatitis, the AHA statement recommends following the previously mentioned strategies, additional dietary changes (including abstinence from alcohol consumption), and the possible use of medium-chain triglycerides and pharmacologic therapies.1

The continuation of a lipid-lowering diet and exercise regimen is important for patients treated for hypertriglyceridemia. The medical conditions associated with lipid abnormalities, including diabetes, metabolic syndrome, hypothyroidism, and renal disease, as well as alcohol intake, should be managed appropriately.1,4 In addition, medications that may contribute to hypertriglyceridemia, including beta-blockers, thiazides, and estrogens, should be ruled out as potential causes of an elevated triglyceride level; these medications may need to be adjusted, changed, or discontinued.1,4

Despite clinical evidence demonstrating the impor­tant role of lipid-lowering therapy in cardiovascular health, medication adherence persists as a major challenge in the treatment of hyperlipidemia. A retrospective data analysis of 88,635 patients who received a new lipid-lowering therapy from 2007 to 2008 showed that 65% of patients were nonadherent to their prescribed medication (percentage of days covered, 0.33).7

Hypertriglyceridemia-Related Costs
Hypertriglyceridemia is associated with substantial medical costs. An analysis of the medical records of 108,324 health plan members aged ≥18 years from 2008 was conducted to assess the impact of hypertriglyceridemia on healthcare costs.8 Costs were adjusted for age, sex, blood pressure, body mass index, smoking history, LDL and HDL cholesterol levels, and conditions such as cardiovascular disease, diabetes, and kidney disease.

Overall, the costs associated with severe hypertriglyceridemia in this analysis were 33% to 38% higher annually, independent of diabetes, cardiovascular disease, heart failure, and hypertension. Outpatient and pharmaceutical costs accounted heavily for the differences in costs.8

A New Treatment Option for Severe Hypertriglyceridemia
In July 2012, Vascepa (icosapent ethyl; Amarin Pharma), an ethyl ester of EPA, was approved by the US Food and Drug Administration (FDA) as an adjunct to diet to reduce triglyceride levels in adult patients with severe (≥500 mg/dL) hypertriglyceridemia.9 Icosapent ethyl is a pure omega-3 fatty acid and the first EPA-only omega-3 agent to be approved by the FDA for this indication.10

Patients should be placed on an appropriate lipid-­lowering diet and exercise regimen before receiving icosapent ethyl and should continue the regimen while receiving icosapent ethyl. Attempts should be made to control any medical problems, such as diabetes mellitus and hypothyroidism, and to limit alcohol consumption, which may contribute to lipid abnormalities. Lipid levels should be consistently abnormal before initiating ico­sapent ethyl. Medications known to exacerbate hypertriglyceridemia (ie, beta-blockers, thiazides, and estrogens) should be discontinued or changed, if possible, before the consideration of triglyceride-lowering drug therapy.4

Dosing
Icosapent ethyl is available as a 1-g soft-gelatin capsule for oral use. The daily dose of icosapent ethyl is 4 g taken as 2 capsules twice daily with food. Icosapent capsules should be swallowed whole and should not be broken open, crushed, dissolved, or chewed.

The patient’s lipid levels should be assessed before initiating therapy, and other causes of high triglyceride levels should be identified and managed as appropriate. Patients should engage in appropriate nutritional intake and physical activity before receiving icosapent ethyl, which should continue during treatment with icosapent.4

Peak plasma concentrations of EPA were reached approximately 5 hours after oral administration of ico­sapent ethyl. EPA is mainly metabolized by the liver via beta oxidation similar to dietary fatty acids. The total plasma clearance of EPA at steady state is 684 mL per hour. The plasma elimination half-life of EPA is approximately 89 hours. Icosapent ethyl does not undergo renal excretion. In clinical trials, plasma total EPA concentrations did not differ significantly between men and women.4

Based on studies of a 4-g daily dose of icosapent ethyl, no drug–drug interactions were observed in patients taking medications that are typical substrates of cytochrome P450 enzymes, including omeprazole, rosiglitazone, warfarin, and atorvastatin.4 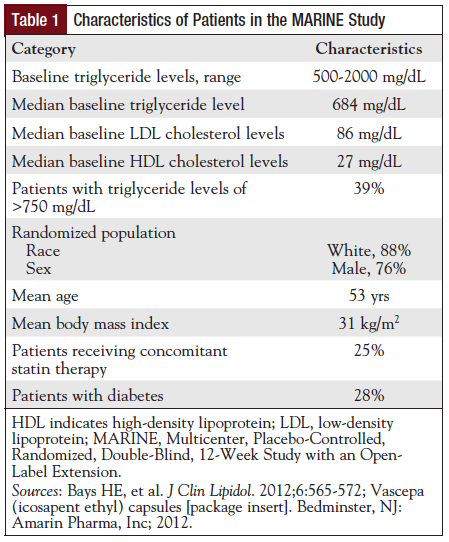 Clinical Trials
The FDA approval of icosapent ethyl was based on the Multicenter, Placebo-Controlled, Randomized, Double-Blind, 12-Week Study with an Open-Label Extension (MARINE)—a randomized, placebo-controlled, double-blind, phase 3 study of adult patients (N = 151) with severe hypertriglyceridemia (>500 mg/dL).2,4 The primary end point of the 12-week MARINE study was the percentage change in triglycerides from baseline to week 12. The baseline characteristics of patients in this study are outlined in Table 1.2,4

In the MARINE study, icosapent ethyl 4 g daily demonstrated a significant reduction in placebo-adjusted median triglyceride level (33%; P <.001), apolipoprotein B level (9%; P <.05), and in VLDL cholesterol (29%; P <.05). Moreover, the reduction in triglyceride levels observed with icosapent ethyl was not associated with elevations in LDL cholesterol levels relative to placebo.4 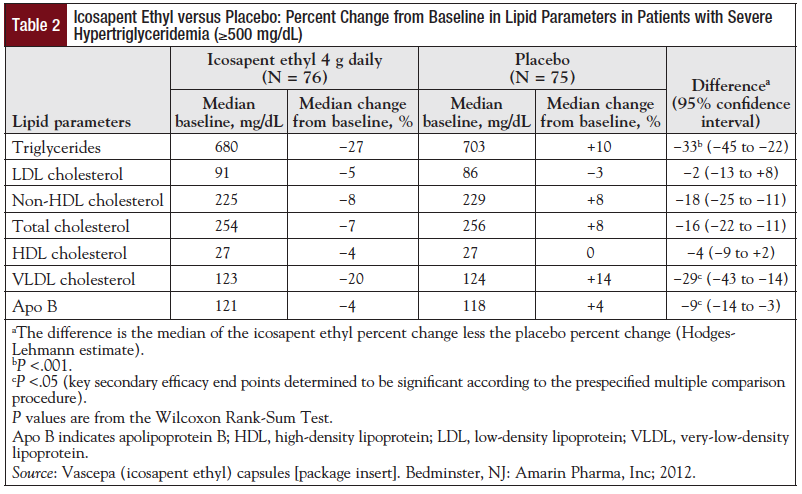 Safety Profile
In clinical studies, icosapent ethyl was generally well tolerated, with a safety profile similar to that of placebo. The most common adverse reaction (incidence, >2%, and greater than placebo) was arthralgia (2.3% for icosapent vs 1.0% for placebo).2,4

Conclusion
With the FDA approval of icosapent ethyl in 2012, a new treatment option became available for patients with severe hypertriglyceridemia, a condition that is associated with an increased risk of cardiovascular disease, particularly in the presence of low HDL cholesterol levels and/or elevated LDL cholesterol levels. Icosa­pent ethyl is the first EPA-only omega-3 agent indicated to reduce triglyceride levels in adults with elevated levels to be used as an adjunct to a lipid-lowering diet and exercise regimen.

In patients with severe hypertriglyceridemia, the daily use of icosapent ethyl for 12 weeks demonstrated a significant reduction in triglycerides, without an increase in LDL cholesterol levels. Moreover, this new medication has shown significant reductions from baseline in non-HDL cholesterol, total cholesterol, VLDL cholesterol, and apolipoprotein B levels. Icosapent ethyl has been shown to be generally well tolerated for severe hypertriglyceridemia, offering patients a safe and effective treatment option, with a new mechanism of action that may be particularly helpful in some patients.