Chronic obstructive pulmonary disease (COPD) is a life-threatening disease characterized by a persistent blockage of airflow from the lungs.1 COPD is not a single disease but an umbrella term that includes chronic bronchitis and emphysema.1 It is estimated that 14.8 million people in the United States were diagnosed with COPD in 2010.2 In addition, according to the National Health and Nutrition Examination Survey data from 1988 to 1994, another 12 million people may have COPD that has not been diagnosed.2 COPD remains underdiagnosed and subsequently undertreated—factors that may impact beneficial intervention in the early phases of the disease.3,4

COPD Overview
COPD is a major cause of disability and the third leading cause of death in the United States, claiming the lives of more than 124,000 people annually.3,5 In 2008, COPD accounted for 56.7% of the 242,350 deaths from lung disease.2 COPD-related deaths are projected to rise by more than 30% globally within the next decade, unless urgent steps are taken to reduce its risk factors—especially tobacco use and tobacco smoke exposure, the primary causes of COPD—as well as other environmental factors.1

Although there is no known cure for COPD, effective management can control its symptoms, reduce the risk of exacerbations and complications, slow the progression of the disease in some cases, and improve patients’ ability to lead active lives.6 Early diagnosis and appropriate management of COPD are crucial, because COPD may worsen over time. Aside from its chronic, progressive nature, COPD exacerbations with acute episodes of worsened symptoms may become more frequent as the disease progresses, leading to emergency department visits and hospitalization.

Although COPD can occur in younger individuals, it has a substantial impact on the elderly population. According to recent data from the Centers for Disease Control and Prevention, the prevalence of COPD has increased from 3.2% in people aged 18 to 44 years to more than 11.6% in people aged ≥65 years.7

In a Medicare claims study of hospital readmission rates during a 12-month period, COPD accounted for a 30-day readmission rate of nearly 23%, which ranked it third behind heart failure (27%) and psychoses (25%), and slightly ahead of pneumonia (20%).8,9 In another study, a Medicare cohort with COPD had total healthcare costs that were $20,500 higher than the comparison group (P <.001), with comorbid conditions accounting for 46% of the excess costs.10

Treatment adherence is particularly problematic, given the chronic nature of COPD, the presence of comorbid conditions, the use of multiple medications, and the periods of symptom remission.12 Patients with COPD have an increased risk for comorbid conditions, such as hypertension, diabetes, cardiovascular disease, lung cancer, and depression.12,13 Polypharmacy presents particular adherence challenges for elderly patients with COPD.14

In 2011, the practice guidelines for the diagnosis and management of stable COPD were updated and released as a collaborative initiative by the American College of Physicians, the American College of Chest Physicians, the American Thoracic Society, and the European Respiratory Society.15 More recently, in early 2013, the Global Initiative for Chronic Obstructive Lung Disease (GOLD) published updated guidelines for the diagnosis, management, and prevention of COPD.16

The treatment goals for patients with COPD include preventing and treating exacerbations, reducing hospitalizations and mortality, relieving dyspnea that restricts activity, and increasing exercise tolerance and health-related quality of life.17 For smokers with COPD, smoking cessation is the most essential step in any treatment plan.6 Pharmacologic treatments include short-acting and long-acting bronchodilators, inhaled steroids, combination inhalers, oral steroids, phosphodiesterase-4 inhibitors, theophylline, and antibiotics. Additional lung therapies, including oxygen therapy, pulmonary rehabilitation, and lifestyle changes, may be recommended. Surgery may also be an option for some patients with severe disease who do not respond to pharmacologic therapy.6

FDA Approves Tudorza Pressair
In July 2012, Tudorza Pressair (aclidinium bromide inhalation powder; Almirall), a long-acting, anticholinergic agent, was approved by the US Food and Drug Administration (FDA) for the long-term maintenance treatment of bronchospasms associated with COPD, including bronchitis and emphysema.18,19 Aclidinium bromide is not indicated for the initial treatment (ie, rescue therapy) of acute episodes of bronchospasms.

In a QT study, aclidinium bromide (200 mcg and 800 mcg) was administered to healthy volunteers once daily for 3 days. No effects on the prolongation of the QT interval were observed.19

Clinical pharmacokinetics studies show that the major route of the metabolism of aclidinium bromide is hydrolysis, which occurs chemically and enzymatically by esterases. Aclidinium bromide is rapidly and extensively hydrolyzed to its alcohol and dithienylglycolic acid derivatives, neither of which bind to muscarinic receptors and both of which are devoid of pharmacologic activity.

Because of the low plasma levels achieved at the clinically relevant doses, aclidinium bromide and its metabolites are not expected to alter the disposition of drugs metabolized by the human cytochrome P450 enzymes.19

Clinical Studies Data Leading to FDA Approval
The FDA approval of aclidinium bromide was based on 4 clinical trials, including a dose-ranging study for nominal dose selection and 3 confirmatory studies. 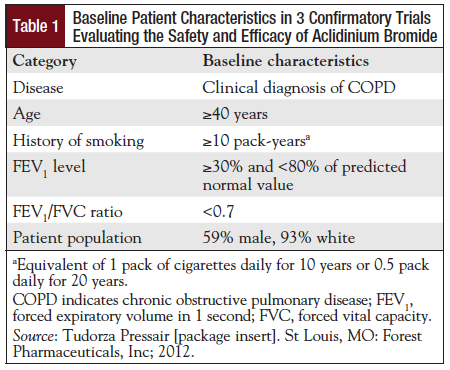 Confirmatory Trials
The efficacy and safety of aclidinium bromide were evaluated in 3 randomized, double-blind, placebo-controlled trials that included a total of 1276 patients with COPD.19,21-23 Baseline characteristics of these patients are shown in Table 1. 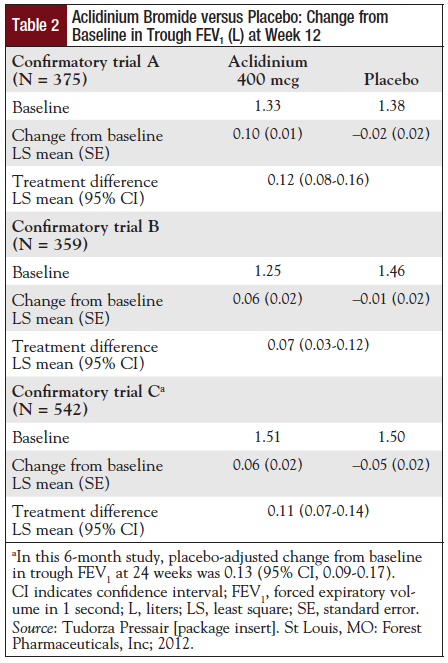 Serial spirometry measurements were conducted throughout daytime hours in a subset of patients in the 3 confirmatory trials. Improvement in lung function was maintained for 12 hours after a single dose of aclidinium bromide and remained consistent over the 3- or 6-month treatment periods. Moreover, the mean peak FEV1 improvements with respect to baseline on day 1 were similar at week 12 in all 3 trials. In 2 of the 3 studies, patients receiving aclidinium bromide used less daily rescue albuterol compared with patients who received placebo.19 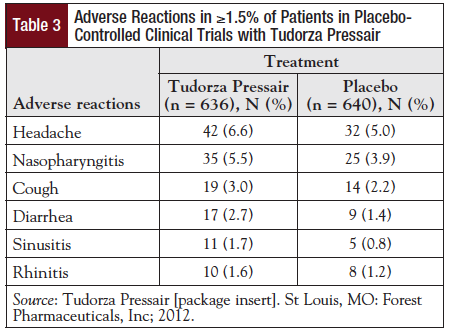 In 3 long-term (40-52 weeks) safety studies of aclidinium bromide 400 mcg administered twice daily, with a total of 891 patients with moderate-to-severe COPD, the adverse events were similar to those reported in the placebo-controlled trials of 3 to 6 months; no new safety findings were reported.19

Precautions and Drug Interactions
There are no contraindications associated with the use of aclidinium bromide. This oral inhaler should be used with caution in patients with narrow-angle glaucoma or urinary retention. Patients who develop any signs or symptoms of narrow-angle glaucoma, prostatic hyperplasia, or bladder-neck obstruction should be referred to a physician. Patients with a history of hypersensitivity reactions should be closely monitored for hypersensitivity reactions to aclidinium bromide. In addition, this orally inhaled medication should be used with caution in patients with severe hypersensitivities to milk proteins.

Conclusion
The FDA approval of aclidinium bromide adds a new therapeutic option for the long-term maintenance treatment of patients with COPD, including chronic bronchitis and emphysema. Aclidinium bromide, a long-acting anticholinergic with specificity for muscarinic receptors, is a dry powder formulation for oral inhalation.