Early type 2 diabetes is characterized by impaired insulin action known as insulin resistance, which is manifested by overproduction of glucose as the ability of insulin to suppress hepatic glucose production is reduced. As the need for insulin increases, insulin production by the pancreas is impaired, and pancreatic beta-cell mass and function decline and worsen progressively. When combined with an excessive rate of hepatic glucose production and a decrease in glucose uptake in the muscle, the progressive decline in insulin secretion leads to hyperglycemia.

The gastrointestinal tract has recently been implicated in the pathogenesis of type 2 diabetes, with the recognition that the insulin secretory response is greater to oral glucose than it is to intravenously administered glucose (called the “incretin effect”). Incretins are gut hormones that promote glucose homeostasis through the glucose-dependent regulation of insulin and glucagon. The gut hormone glucagon-like peptide-1 (GLP-1) is released in response to an ingested meal and glucose load, which stimulates insulin secretion. The release of GLP-1 is deficient in type 2 diabetes, which contributes to the development of impaired insulin secretion. The incretin effect is therefore reduced in patients with type 2 diabetes.

The Burden of Type 2 Diabetes
The prevalence of type 2 diabetes continues to increase. Approximately 26 million Americans have type 1 and type 2 diabetes, with type 2 diabetes accounting for 90% to 95% of the cases.1 In the pooled 2003-2006 National Health and Nutrition Examination Surveys, the national prevalence of diabetes among US adults aged ≥30 years was 13.7% for men and 11.7% for women.2

Premature mortality, which is frequently caused by cardiovascular disease (CVD), is a consequence of type 2 diabetes, especially when the disease is poorly controlled. Cardiovascular (CV) mortality increases as levels of hemoglobin (Hb)A1c rise.5 In addition to increasing the risk for macrovascular complications, poor glucose control is also a major risk factor for microvascular disease.6 Microvascular complications of type 2 diabetes and of hyperglycemia include retinal, renal, and neuropathic diseases.

HbA1c Target Levels
A 2012 position statement issued jointly by the American Diabetes Association (ADA) and the European Association for the Study of Diabetes (EASD) recommends an HbA1c target of <7% when instituting antihyperglycemic therapy, but individualization of treatment targets is deemed important.7 The HbA1c target levels are lower for younger, healthier patients (target, 6.0%-6.5%) than they are for older patients, who have comorbidities and may be prone to hypoglycemia (target, 7.5%-≥8.0%).7 Therapy should be selected and titrated to avoid hypoglycemia.

Pharmacologic Treatment Options for Type 2 Diabetes
Metformin
Metformin (Glucophage) is the first-line oral antihyperglycemic agent for most patients with type 2 diabetes who cannot achieve glycemic control through diet and lifestyle interventions. Metformin is a biguanide that reduces hepatic glucose production; its predominant mechanism of action is to achieve glycemic control. The drug is weight-neutral and does not increase the risk of hypoglycemia.

The 2012 ADA/EASD position statement supports the recommendation of metformin as the preferred initial antihyperglycemic therapy.7 Type 2 diabetes is a progressive disease; therefore, metformin alone often eventually fails to provide adequate glycemic control. However, there are few data to guide therapy after treatment with metformin. Advancing to combination therapy with 1 or 2 additional oral or injectable agents is reasonable if a 3-month trial of monotherapy does not maintain an HbA1c target level. Initial dual-combination therapy can be considered when HbA1c levels are ≥9%.7

DPP-4 Inhibitors
DPP-4 inhibitors increase the levels of endogenous GLP-1 by 3- to 4-fold within 5 minutes of oral administration, improve glucose tolerance, and enhance pancreatic insulin secretion. These agents are weight-neutral and have a low propensity for severe hypoglycemia, which makes them an attractive add-on therapy to metformin for patients with type 2 diabetes.

Because patients with type 2 diabetes are at a high risk for CVD, the therapeutic choice should take CV risk potential into consideration. Preliminary reports show an improvement in CV risk with DPP-4 inhibitors, although clinical outcomes data are few. The results of a recent meta-analysis showed a relative risk of 0.48 for any adverse CV event and a relative risk of 0.40 for nonfatal myocardial infarction or acute coronary syndrome when managing type 2 diabetes with a DPP-4 inhibitor compared with other oral antidiabetes drugs.8 The analysis included 18 trials with 4998 patients who received DPP-4 inhibitors and 3546 patients who received comparative oral antidiabetes drugs. The risk for adverse CV events was not significantly different with DPP-4 inhibitors compared with placebo; however, when compared with metformin and other oral agents (ie, sulfonylureas and thiazolidinediones), the risk was lower by a significant 58% with DPP-4 inhibitor therapy.8

Dosing and Schedule
Linagliptin plus metformin hydrochloride combination is available in the following strengths:

Clinical Pharmacology of Linagliptin plus Metformin
Mechanism of Action
Linagliptin inhibits the enzyme DPP-4 to prevent the inactivation of the incretin hormones GLP-1 and glucose-dependent insulinotropic peptide (GIP). By doing so, linagliptin increases the concentrations of GLP-1 and GIP, which are involved in the physiologic regulation of glucose homeostasis. Preventing the inactivation of GLP-1 through selective inhibition of DPP-4 increases plasma insulin in response to meals.9

In healthy individuals, peak plasma concentrations occurred at approximately 1.5 hours after the administration of a 5-mg dose of linagliptin; the mean plasma area under the curve (AUC) was 139 nmol*h/L, and the maximum concentration (Cmax) was 8.9 nmol/L. The effective half-life for the accumulation of oral linagliptin, as determined from the administration of multiple 5-mg doses, is approximately 12 hours. After once-daily dosing, steady-state plasma concentrations of linagliptin were reached by the third dose, and the Cmax and the plasma AUC increased by a factor of 1.3 at steady state compared with the first dose. Plasma AUC of linagliptin increased in a less-than-dose-proportional manner in the dose range of 1 to 10 mg. The pharmacokinetics of linagliptin is similar in patients with type 2 diabetes.9 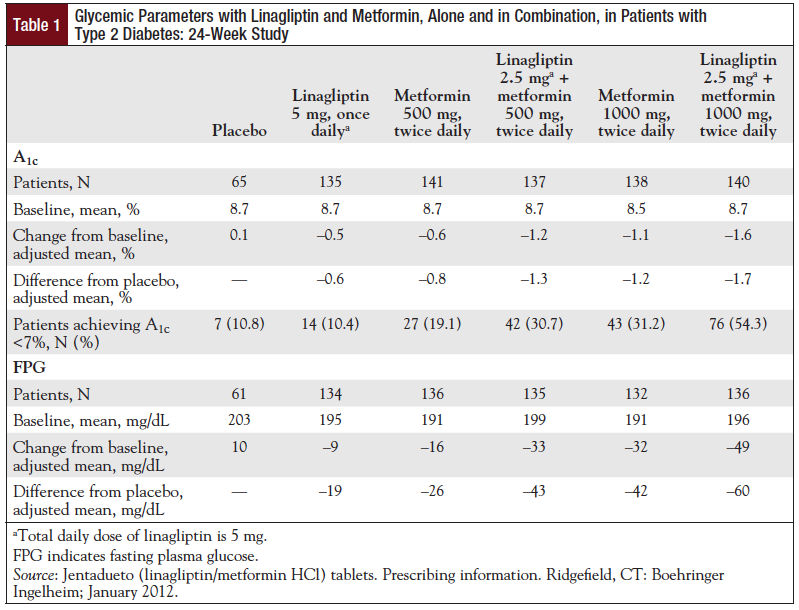 Active Controlled Study versus Glimepiride in Combination with Metformin Study
Linagliptin plus metformin was compared with glimep­iride plus metformin in a 104-week, double-blind noninferiority study in 1552 patients with type 2 diabetes who had inadequate glycemic control despite metformin therapy.12 Patients who received metformin monotherapy entered a 2-week run-in period; those who had previously received metformin and 1 additional antihyperglycemic agent entered a 6-week run-in treatment period with metformin monotherapy 1500 mg daily and washout of the other agent. After an additional 2-week placebo run-in period, patients with inadequate glycemic control were randomized in a 1:1 ratio to the addition of linagliptin 5 mg once daily or to glimepiride 1 mg daily titrated to a maximum of 4 mg daily to optimize glycemic control.12 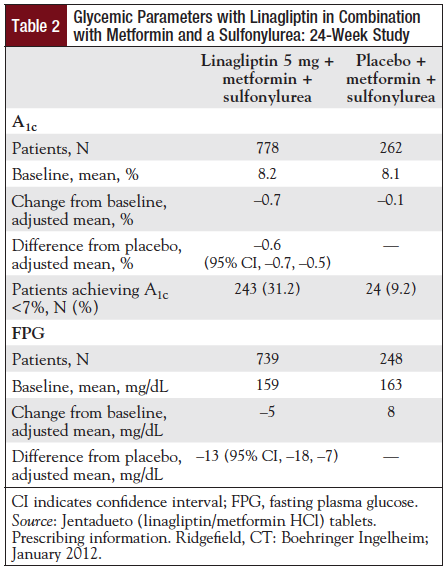 Add-On Combination Therapy with Metformin and a Sulfonylurea Study
In a randomized, double-blind, placebo-controlled study, 1058 patients with type 2 diabetes who received a sulfonylurea and metformin were randomized to receive linagliptin 5 mg once daily or placebo for 24 weeks (Table 2).13 The most common sulfonylureas used in the study were glimepiride, glibenclamide, and gliclazide (not available in the United States). Patients who failed to meet specific glycemic goals during the study received pioglitazone rescue. The primary glycemic end points were levels of HbA1c and fasting plasma glucose (FPG) levels.

Linagliptin as Add-On to Metformin
At the end of this placebo-controlled study of linagliptin as add-on therapy to metformin, the reduction in HbA1c was –0.49% with linagliptin versus an increase of 0.15% with placebo, for a treatment difference of –0.64% (P <.001).11 A significantly higher percentage of patients in the linagliptin group achieved HbA1c <7% compared with the placebo group (26% vs 9%, respectively; P = .001). Rescue glycemic therapy was used in 7.8% of the patients who received linagliptin versus 18.9% of the placebo recipients.11

Active Controlled Study versus Glimepiride in Combination with Metformin
In this study, reductions in adjusted mean HbA1c levels were similar in the linagliptin (–0.16%) and glimepiride (–0.36%) groups, with a difference of 0.20%, which met the predefined noninferiority criterion of 0.35%.12 Fewer patients had hypoglycemia (7% vs 36%, respectively; P <.001) or severe hypoglycemia (<1% vs 2%, respectively) with linagliptin compared with glimepiride.12

Add-On Combination Therapy with Metformin and a Sulfonylurea
In combination with a sulfonylurea and metformin, linagliptin was associated with significant improvements in HbA1c and FPG levels compared with placebo (Table 2).13 In this study comprised of patients receiving linagliptin in combination with a sulfonylurea and metformin, the mean reductions from baseline were HbA1c –0.6% and FPG –12.7 mg/dL relative to placebo. Rescue therapy was used in 5.4% of the patients receiving linagliptin versus 13% of those receiving placebo.12

Hypoglycemia was more common in patients treated with the combination of linagliptin plus metformin and sulfonylurea compared with those treated with the combination of placebo, sulfonylurea, and metformin. Pancreatitis was reported more often in patients randomized to linagliptin than in those receiving comparator agents (1 per 538 person-years vs 0 per 433 person-years, respectively).9

The FDA approval of Jentadueto includes a Boxed Warning regarding the risk for lactic acidosis. Lactic acidosis is a rare risk of metformin accumulation. In more than 20,000 patient-years of exposure to metformin in clinical trials, there were no reports of lactic acidosis.

The risk of lactic acidosis with metformin increases with renal impairment, sepsis, dehydration, excess alcohol intake, hepatic impairment, and acute congestive heart failure. The risk can be minimized by regularly monitoring renal function. If lactic acidosis is suspected, linagliptin plus metformin hydrochloride should be discontinued and the patient should be hospitalized immediately.

Drug Interactions
Linagliptin is a weak-to-moderate inhibitor of the cytochrome (CY)P isozyme CYP3A4, but it does not inhibit other CYP enzymes. It is a P-glycoprotein (P-gp) substrate, and it inhibits P-gp–mediated transport of digoxin at high concentrations. Linagliptin is considered unlikely to cause interactions with other P-gp substrates at therapeutic concentrations.14

Inducers of CYP3A4 or P-gp (eg, rifampin) decrease exposure to linagliptin to subtherapeutic, and likely ineffective, concentrations. For patients requiring the use of such drugs, an alternative to linagliptin is strongly recommended. No dose adjustment of linagliptin is recommended based on the results of the described pharmacokinetic studies.14

Conclusion
The combination of linagliptin plus metformin hydrochloride in a single tablet provides another therapeutic option to achieve glycemic control in patients with type 2 diabetes whose disease is inadequately controlled by lifestyle measures alone or by lifestyle measures combined with metformin monotherapy. According to recent guidelines, initiating therapy with dual antihyperglycemic agents may be appropriate in certain populations of patients with HbA1c levels >9%. Preliminary evidence suggests that there is a reduction in CV risk when patients are treated with DPP-4 inhibitors relative to other oral antidiabetic agents.