Overweight and obesity are major health concerns in the United States and worldwide, and they are associated with increased health risks.

The Impact and Burden of Obesity and Overweight
Being overweight or obese is associated with specific health risks. Obesity increases the risk for type 2 diabetes, hypertension, adverse lipid concentrations, heart disease, stroke, and certain types of cancer—some of the leading causes of preventable deaths.1,2 Obesity is defined as a body mass index (BMI) of ≥30 kg/m2, and overweight is defined as a BMI of ≥25 kg/m2.3

Based on data from the 2009-2010 National Health and Nutrition Examination Survey, approximately 78.1 million (35%) men and women and 12.5 million (16.9%) children (aged ≤19 years) in the United States are obese; overall, older adults (aged ≥60 years) have a greater likelihood of being obese than younger adults (aged <60 years).2 Furthermore, more than 34% of American adults aged ≥20 years are overweight.4

A number of serious comorbidities are associated with obesity, including cardiovascular (CV) disease, type 2 diabetes, hypertension, sleep apnea, and some types of cancer. Obesity and overweight can also lead to cardiac complications, such as congestive heart disease, heart failure, and even sudden death.5

In addition, according to the Centers for Disease Control and Prevention, obesity and overweight impose a substantial economic burden on the US healthcare system.1 The total annual medical costs associated with obesity are estimated at $147 billion.1 The per-person medical costs are $1429 higher for obese people than for normal-weight individuals.1

Given the impact of obesity on overall health and outcomes—and its as­sociation with increased morbidity and mortality and a reduced life expectancy—approaches to meaningful weight loss may help improve outcomes in appropriate patients.

First Weight-Loss Prescription Therapy Approved in 13 Years
In June 2012, the US Food and Drug Administration (FDA) approved lorcaserin hydrochloride (Belviq; Arena Pharmaceuticals) as an addition to a reduced-­calorie diet and exercise for the treatment of chronic-weight management. This was the first FDA approval of a prescription weight-loss treatment in the past 13 years.9

Lorcaserin hydrochloride, a novel oral serotonin 2C receptor antagonist, is indicated as an adjunct to a reduced-calorie diet and to increased physical activity in adults with an initial BMI of ≥30 kg/m2 (ie, obese) or a BMI of ≥27 kg/m2 (ie, overweight) in the presence of at least 1 weight-related comorbid condition, including hypertension, dyslipidemia, or type ­2 diabetes.10

A Risk Evaluation and Mitigation Strategy program for lorcaserin was not required by the FDA; however, postmarketing studies are being conducted to evaluate the safety and efficacy of this medication for weight management in obese pediatric patients and for the long-term treatment effect of lorcaserin on the incidence of major CV adverse events (AEs) in overweight and obese persons with CV risk factors.9

Pharmacodynamics (cardiac electrophysiology)
The effect of oral lorcaserin 15 mg and 40 mg once daily with corrected QT (QTc) interval was evaluated in a randomized, placebo- and active (moxifloxacin 400 mg)-controlled 4-treatment arm parallel in 244 healthy subjects. In a study designed to detect small effects, the upper bound of the one-sided 95% confidence interval for the largest placebo-adjusted, baseline-corrected QTc interval based on individual correction method was below 10 ms (the regulatory threshold).10

Dosing
Lorcaserin is available as a 10-mg, film-coated tablet; its recommended dose is 10 mg, administered orally twice daily.10 If a 5% weight loss is not achieved with this treatment by week 12, lorcaserin should be discontinued.10

Clinical Studies Data
The FDA approval of lorcaserin was based on safety and efficacy data from 3 randomized, placebo-controlled trials, which included more than 7700 overweight and obese participants.7,11,12 These studies are described in the product prescribing information10 and in relevant published articles; the key data are highlighted below.

The BLOOM-DM Trial
The safety and efficacy of lorcaserin for weight loss in patients with type 2 diabetes were evaluated in the Behavioral Modification and Lorcaserin for Overweight and Obesity Management in Diabetes Mellitus (BLOOM-DM) study, a 1-year, placebo-controlled trial that followed 604 adult overweight patients (BMI ≥27 kg/m2) with inadequately controlled type 2 diabetes (hemoglobin [Hb] A1c range, 7%-10%).7 Patients were randomized in a 1:1:1 ratio to receive placebo, lorcaserin 10 mg once daily, or lorcaserin 10 mg twice daily. The majority of patients (91.7%) received metformin, and 50.2% received a sulfonylurea. All the patients received diet and exercise counseling.7 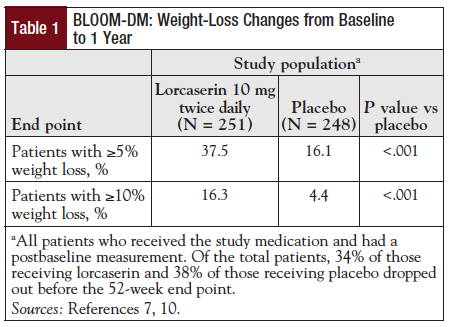 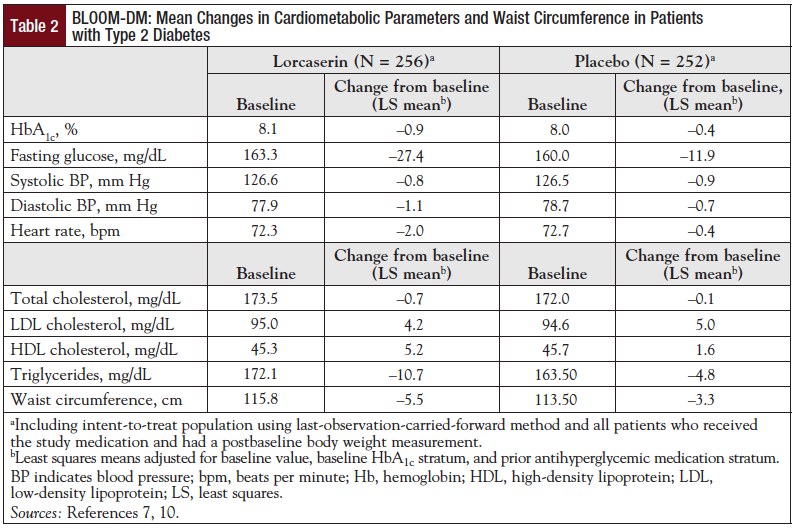 The BLOOM Trial
The Behavioral Modification and Lorcaserin for Overweight and Obesity Management (BLOOM) trial evaluated weight loss at 1 year and the maintenance of weight loss at 2 years.11 In this double-blind study, 3182 obese or overweight adults (mean BMI, 36.2 kg/m2) were randomly assigned to receive lorcaserin 10 mg, or placebo, twice daily for 52 weeks. All patients received diet and exercise counseling. At week 52, the placebo group continued to receive a placebo, but patients who were receiving lorcaserin were randomly reassigned to receive a placebo or lorcaserin. 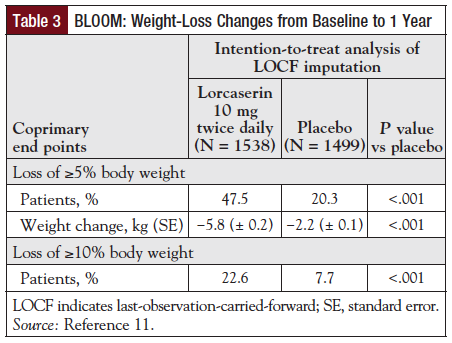 At 1 year, 55.4% (883:1595) of patients in the lorcaserin group and 45.1% (716:1587) of patients in the placebo group remained in the study; of these, 1553 patients continued into year 2.11 Lorcaserin, in combination with behavioral modification, was associated with significant weight loss and improved maintenance of weight loss compared with placebo (Table 3).11

There was no increase in the rate of cardiac valvulopathy with lorcaserin in the 2472 patients evaluated at 1 year and in the 1127 patients evaluated at 2 years.11 The most common AEs were upper respiratory infections, headache, dizziness, nasopharyngitis, and nausea. The rates of serious AEs were similar in the lorcaserin and the placebo groups.11

The BLOSSOM Trial
The Behavioral Modification and Lorcaserin Second Study for Obesity Management (BLOSSOM) trial, a double-blind, randomized, placebo-controlled study conducted at 97 US research centers, evaluated the effects of lorcaserin on body weight, CV risk factors, and safety in 4008 obese and overweight patients.12 Patients were randomized in a 2:1:2 ratio to receive lorcaserin 10 mg twice daily, lorcaserin 10 mg once daily, or placebo. All patients received diet and exercise counseling.12 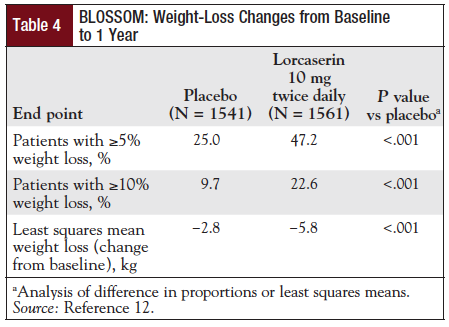 Lorcaserin, in conjunction with lifestyle modification, was associated with a significantly greater dose-dependent weight loss compared with placebo (Table 4). The most frequent AEs were headache, nausea, and dizziness. At 1 year, lorcaserin did not increase the rate of echocardiographic valvulopathy (as defined by the FDA), which occurred in 2% of patients receiving placebo and in 2% of patients in the 10-mg twice-daily lorcaserin group.12 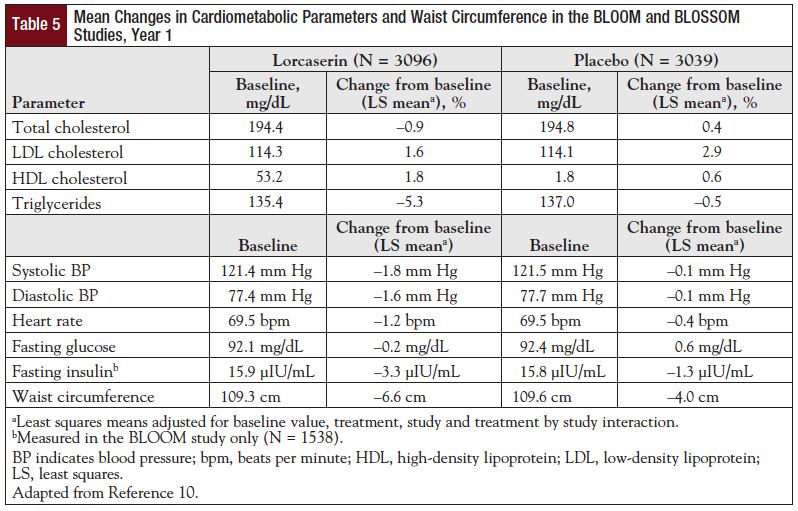 Table 5 compares the cardiometabolic changes seen with lorcaserin and placebo in the BLOOM and BLOSSOM trials.

Safety Profile and Metabolic Properties
The most common AEs associated with lorcaserin (>5%) in nondiabetic patients are headache, dizziness, fatigue, nausea, dry mouth, and constipation; in diabetic patients, the most common AEs are hypoglycemia, headache, back pain, cough, and fatigue.10 Response to lorcaserin should be evaluated at 12 weeks of treatment to determine if therapy should be discontinued. (There are no black box warnings associated with the use of lorcaserin.)

Contraindications
Lorcaserin is contraindicated during pregnancy, because weight loss offers no potential benefit to pregnant women and may result in fetal harm. It should not be taken during pregnancy or by women who are planning to become pregnant.10

Drug Interactions
Serotonin syndrome or neuroleptic malignant syndrome–like reactions. Based on the mechanism of action of lorcaserin and the theoretical potential for serotonin syndrome, lorcaserin should be used with extreme caution in combination with other drugs that may affect the serotonergic neurotransmitter systems, including, but not limited to, triptans, monoamine oxidase inhibitors (MAOIs; including linezolid, an antibiotic which is a reversible nonselective MAOI), selective serotonin reuptake inhibitors, selective serotonin norepinephrine reuptake inhibitors, dextro­methorphan, tricyclic anti­depressants, bupropion, lithium, tramadol, tryptophan, and St John’s wort.10

CYP450 (2D6) substrates. Caution should be used when administering lorcaserin together with drugs that are cytochrome (CY)P450 2D6 substrates, because lorcaserin can increase exposure of these drugs.

Changes in attention or memory. Problems with somnolence, confusion, and fatigue have been reported in patients taking lorcaserin. Patients should be cautioned not to drive a car or operate heavy machinery until they know how lorcaserin affects them.10

Psychiatric disorders. Higher-than-recommended doses of lorcaserin may cause hallucinations, feelings of euphoria, and dissociation; the recommended dose of 10 mg twice daily should not be exceeded.10

Hypoglycemia. Weight loss may cause low blood glucose in people with type 2 diabetes who are receiving medications to treat it, such as metformin, insulin, or sulfonylureas. Lorcaserin has not been studied in combination with insulin. Blood glucose levels should be monitored for patients who take lorcaserin.10

Priapism. Patients with an erection lasting more than 4 hours should stop using lorcaserin and should call their doctor or go to the nearest emergency department immediately. Lorcaserin should be taken with caution by men who have conditions that may predispose them to priapism (eg, sickle-cell anemia, multiple myeloma, or leukemia) or in men with a deformed penis.10

Heart rate decrease. Lorcaserin may cause a slow heartbeat. It should be used with caution in patients with bradycardia or with a history of heart block greater than first degree.10

Hematologic changes. Lorcaserin may cause decreases in red or white blood–cell count. The period monitoring of complete blood count during treatment with lorcas­erin should be considered.10

Prolactin elevation. Lorcaserin moderately elevates prolactin levels. Prolactin should be measured when symptoms and signs of prolactin excess are suspected.

Pulmonary hypertension. Certain weight-loss drugs have been associated with the rare but life-threatening side effect of increased pressure in the arteries of the lung. It is unknown if lorcaserin increases the risk for this condition.

Specific Populations
It is not known whether lorcaserin is excreted in human milk. Lorcaserin should not be taken while breastfeeding. The safety and effectiveness of lorcas­erin in pediatric patients aged <18 years have not been established, and the use of lorcaserin is not recommended in pediatric patients. Clinical studies of lorcaserin did not include sufficient numbers of patients aged ≥65 years to determine whether they respond differently from younger subjects, but greater sensitivity of some older individuals cannot be ruled out. No dose adjustment of lorcaserin is required in patients with mild renal impairment. Lorcaserin should be used with caution in patients with moderate renal impairment. Dose adjustment is not required for patients with mild-to-moderate hepatic impairment (Child-Pugh score of 5-9).

Potential for Abuse and Dependence
In short-term studies with healthy individuals, euphoria after oral administration of lorcaserin was seen in 16% of patients after receiving 40 mg and in 19% of patients after receiving 60 mg. However, in clinical studies with obese patients with durations of 4 weeks to 2 years, the incidence of euphoria and hallucinations after oral doses of lorcaserin up to 40 mg was low (<1.0%).10 The ability of lorcaserin to produce hallucinations, euphoria, and positive subjective responses at supra­therapeutic doses suggests that lorcaserin may produce psychic dependence. There are no data on overdosing with lorcaserin.

Conclusion
Evidence from randomized, placebo-controlled clinical trials indicate that lorcaserin, in combination with diet and exercise, is more effective than diet and exercise alone at helping patients lose ≥5% of body weight after taking this medication for 1 year. In addition, the use of lorcaserin helps to maintain the weight loss for up to 2 years, based on current evidence. As part of the FDA approval of lorcaserin, additional postmarketing safety and efficacy studies are being conducted. Lorcaserin is a new treatment option that may help to address some of the unmet medical needs of the growing population of overweight and obese persons in the United States.