Atrial fibrillation (AF), the most common cardiac arrhythmia, is a compelling, independent risk factor for stroke. In fact, AF is associated with a 5-fold increased risk for stroke.1,2 An estimated 15% to 20% of ischemic strokes are caused by AF.2 Aside from its link to stroke, AF is associated with an increased risk of mortality as well as increased risks of morbidity, heart failure, and cognitive impairment. Given that AF is often asymptomatic and may go undetected clinically, its impact may be underestimated.1

A retrospective study of Medicare patients aged ≥65 years who were diagnosed with AF between 1993 and 2007 showed that although the incidence of AF remained relatively stable for more than a decade, the prevalence of AF increased across the study period (mean, 5% annually). Moreover, the age- and sex-adjusted mortality rate was 11% at 30 days and a staggering 25% at 1 year (in 2007).3

By 2030, the number of people living with stroke is predicted to increase by 4 million.4 Stroke is one of the leading causes of mortality in the United States, accounting for 1 of 19 deaths annually.5 Of the 795,000 people who have a stroke annually, an estimated 610,000 of these occurrences are first strokes and 185,000 are recurrent strokes.5 Furthermore, the number of deaths attributed to ischemic stroke are projected to nearly double between 2002 and 2032.6

Stroke is also a leading cause of disability and accounts for reduced mobility in >50% of stroke survivors aged ≥65 years.5 In addition, stroke is associated with substantial healthcare costs, accounting for $38.6 billion annually in the United States, including medications, healthcare services, and lost productivity.5

The impact and burden of AF and other risk factors underscore a need for the aggressive prevention of stroke and thromboembolic events, including anticoagulation therapy in appropriate patients. The American Heart Association generated a new set of impact goals, with the following commitment: “By 2020, to improve the cardiovascular health of all Americans by 20%, while reducing deaths from [cardiovascular diseases] and stroke by 20%.”1 However, many patients with AF are not receiving adequate levels of anticoagulation, and therefore, they may not be receiving optimal prevention from stroke.7

Vitamin K antagonists have been used as oral anticoagulant therapy for more than 5 decades.8 In patients with AF, treatment with warfarin, a vitamin K antagonist, has been shown to reduce the risk of stroke by approximately 60%, and antiplatelet agents have shown to provide an approximate 20% reduction in stroke risk.9 A study showed that in patients with AF aged ≥65 years, only 51% were receiving warfarin at the time of hospital discharge.10 The reasons cited for not treating the patients with warfarin included past intolerance to warfarin, hemorrhage, falls, and patient refusal or nonadherence.10

The vitamin K antagonists have a number of challenges and limitations: a narrow therapeutic window and dose response, drug and food interactions, the need for monitoring and difficulty standardizing laboratory control, and bleeding risk.8,11

More recently, the emergence and US Food and Drug Administration (FDA) approval of novel anticoagulant agents, including the direct thrombin (factor IIa) inhibitors and direct factor Xa inhibitors, may provide clinicians with additional options for managing patients with nonvalvular AF who are at risk for stroke and systemic embolism.

Eliquis a New Therapeutic Option to Reduce the Risk of Stroke in Patients with AF
In December 2012, apixaban (Eliquis; Bristol-Myers Squibb) was approved by the FDA to reduce the risk of stroke and systemic embolism in patients with nonvalvular AF.12 Apixaban is an oral, selective active-site inhibitor of factor Xa that does not require antithrombin III for antithrombotic activity.13
According to Renato Lopes, MD, a cardiologist and the lead investigator of a follow-up analysis of the ARISTOTLE study, “With new oral anticoagulants, such as apixaban, we might not need risk scores to guide treatment decisions for stroke prevention in patients with atrial fibrillation. This may simplify how physicians make decisions and also improve patient care.”14,15

The FDA has required a Risk Evaluation and Mitigation Strategy for apixaban to communicate the following information to healthcare providers: there is an increased risk of thrombotic events, including stroke, in patients with nonvalvular AF when apixaban is discontinued without introducing an adequate alternative anticoagulant; and it is important to follow apixaban’s prescribing information recommendations when patients with nonvalvular AF are converted from apixaban to warfarin or to other anticoagulant agents.16

The concomitant use of apixaban with strong dual inducers of CYP3A4 and P-gp (eg, rifampin, carbamazepine, phenytoin, St John’s wort) should be avoided, because these agents will decrease exposure to apixaban.13

Mechanism of Action
Apixaban inhibits free and clot-bound factor Xa and prothrombinase activity. Apixaban has no direct effect on platelet aggregation, but it indirectly inhibits platelet aggregation that is induced by thrombin. By inhibiting factor Xa, apixaban decreases thrombin generation and thrombus development.
In pharmacodynamic drug interaction studies, no pharmacodynamic interactions were observed with aspirin or with clopidogrel; however, a 50% to 60% increase in anti–factor Xa activity was observed when apixaban was coadministered with enoxaparin or naproxen.

Apixaban displays prolonged absorption. Despite a short clearance half-life of approximately 6 hours, the apparent half-life during repeat dosing is approximately 12 hours, which allows twice-daily dosing to provide effective anticoagulation; however, when the drug is stopped for surgery, anticoagulation persists for at least a day.

Clinical Trials
The FDA approval of apixaban was based on 2 clinical trials, ARISTOTLE and AVERROES.

ARISTOTLE Trial
The ARISTOTLE trial, a multinational, double-blind study, compared the effects of apixaban and warfarin on the risks of stroke (ischemic or hemorrhagic), non–central nervous system systemic embolism, major bleeding, and death from any cause in patients with nonvalvular AF and at least 1 additional risk factor for stroke.11,13 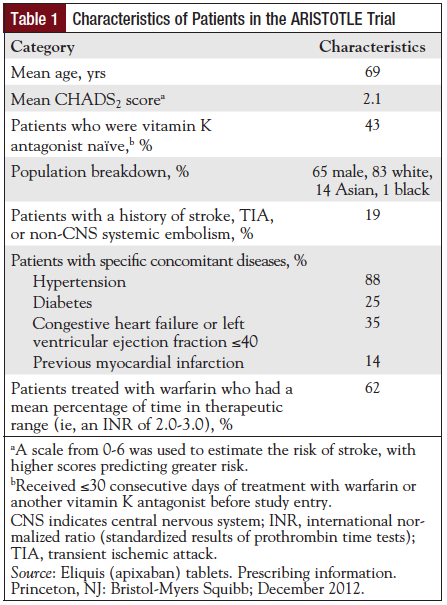 In this study, a total of 18,201 patients were randomized and followed on study treatment for a median of 89 weeks. The patients were randomized to apixaban 5 mg orally twice daily (or 2.5 mg twice daily in patients with least 2 of the following factors: age ≥80 years, body weight ≤60 kg, or serum creatinine ≥1.5 mg/dL) or to warfarin (targeted to an international normalized ratio range of 2.0-3.0). The baseline characteristics of the patients in this study appear in Table 1.13

Apixaban was shown to be superior to warfarin for the primary end point of reducing the risks of stroke and systemic embolism. The efficacy outcomes from the intent-to-treat analysis of this trial are shown in Table 2.13 The superiority of apixaban to warfarin was primarily attributable to reductions in hemorrhagic stroke and ischemic strokes with hemorrhagic conversion compared with warfarin. Purely ischemic strokes occurred with similar rates in patients in both treatment groups. Reductions in the primary efficacy outcomes with apixaban were consistent across all major subgroups.11,13

Apixaban was associated with significantly fewer major bleeds than warfarin.13 Moreover, treatment with apixaban resulted in a significantly lower rate of all-cause death (P = .046) than treatment with warfarin, primarily because of a reduction in cardiovascular death, particularly stroke deaths. Nonvascular death rates were similar in both treatment arms. The apixaban group had a lower rate of discontinuation from the study than the warfarin group.11,13

AVERROES Trial
The primary objective of the AVERROES trial was to evaluate whether apixaban was superior to aspirin in preventing the composite outcomes of stroke or systemic embolism. This study included 5598 patients with nonvalvular AF who were not considered to be candidates for warfarin therapy and who were randomized to receive treatment with apixaban 5 mg orally twice daily (or 2.5 mg twice daily in selected patients) or to aspirin 81 to 324 mg once daily.13,17

The AVERROES study was stopped early, based on a prespecified interim analysis demonstrating significant reductions in stroke and systemic embolism with apixaban compared with aspirin that was associated with a modest increase in major bleeding. The key efficacy findings from this study are shown in Table 3.13

Adverse Events
The most common adverse reactions (>1%) reported with apixaban were related to bleeding. Apixaban increases the risk of bleeding and can cause serious, potentially fatal bleeding (Table 4).13 The concomitant use of drugs affecting hemostasis increases the risk of bleeding, including aspirin and other antiplatelet agents, other anticoagulants, heparin, thrombolytic agents, selective serotonin reuptake inhibitors, serotonin–norepinephrine reuptake inhibitors, and nonsteroidal anti-inflammatory drugs. Patients should be made aware of the signs or symptoms of blood loss, and they should be instructed to immediately report to an emergency department if they experience any of these signs or symptoms.13

Warning and Precautions
The prescribing information for apixaban includes a Boxed Warning stating that discontinuation of apixaban places patients at an increased risk of thrombotic events. An increased rate of stroke was observed after discontinuation of apixaban in clinical trials that included patients with nonvalvular AF. The warning also states that if anticoagulation with apixaban must be discontinued for a reason other than pathologic bleeding, coverage with another anticoagulant should be strongly considered.

There is no way to reverse the anticoagulant effect of apixaban, which can persist for approximately 24 hours after the last administered dose (ie, approximately 2 half-lives), and there is no specific antidote for apixaban.13 As a result of high plasma protein binding, apixaban is not considered to be dialyzable. The anticoagulant effects of apixaban are not affected by protamine sulfate or by vitamin K. There are no available data on the effects of antifibrinolytic agents (eg, tranexamic acid, aminocaproic acid) on patients receiving apixaban, and there is no scientific rationale for reversal or for experience with systemic hemostatics (ie, desmopressin and aprotinin). The use of procoagulant reversal agents (eg, prothrombin complex concentrate, activated prothrombin complex concentrate, or recombinant factor VIIa) may be considered, but there are no clinical studies to evaluate their use. The plasma concentrations of apixaban can be lowered with the use of activated charcoal, which reduces the absorption of apixaban.13

Conclusion
The FDA approval of apixaban marks the availability of a new therapeutic option to reduce the risk of stroke and systemic embolism in patients with nonvalvular AF. Apixaban inhibits free and clot-bound factor Xa and prothrombinase activity without requiring antithrombin III for antithrombotic activity.

In patients with AF and at least 1 additional risk factor for stroke, apixaban was shown to be superior to warfarin in preventing stroke or systemic embolism and was associated with less bleeding and a lower mortality rate. Compared with warfarin, treatment with apixaban significantly reduced the risk of stroke or systemic embolism by 21%, major bleeding by 31%, and death by 11%. The most common adverse events (>1%) were related to bleeding.11,13